Part 5 of the Cinematronics History will be delayed as I wait for more information on Cosmic Chasm.
In the meantime, in honor of the recent release of Atari, Inc. Business is Fun here's a post on some oddball Atari coin-op products. 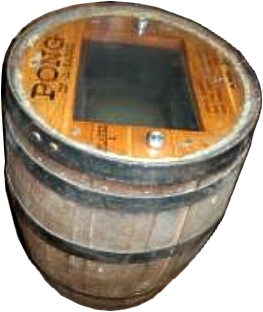 A small number of Pong games (Nolan Bushnell guesses about 20) were mounted face-up in actual barrels. Bushnell claims they were produced very early in Pong's production using Napa valley wine barrels  and that they stopped making them after the barrels started falling apart. Ted Dabney recalls that he was sent to Canada to get the barrels and that they were not wine barrels (which he says would have been illegal to use).
Not to be confused with Barrel Pong, which was releaed in Australia.
Dabney also reports that shortly after he first met Bushnell at Ampex, Nolan told him about an idea he had for a family-friendly resaurant with singing ----- barrels.
Apparently Nolan had a thing for barrels.
Here's another flyer showing Pong-on-a-Barrel. That funky cabinet behind it is an alternate fiberglass Space Race cabinet. 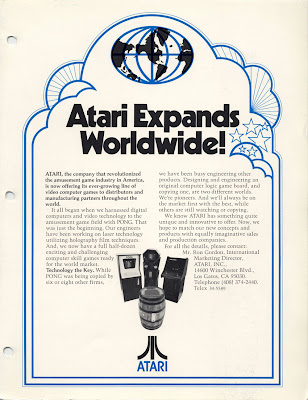 And how about this one from Elcon Industries. From the March, 1976 Play Meter. They also offered Ramtek's Hit Me in the barrel cabinet. 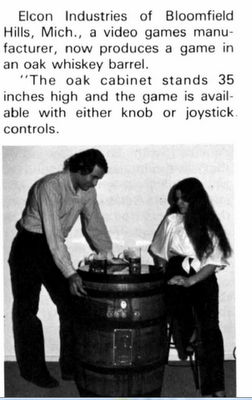 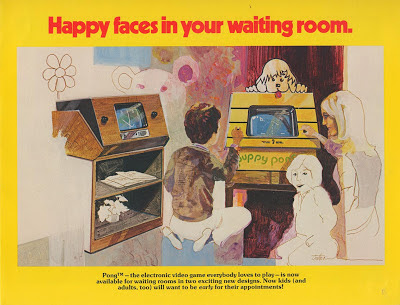 Late 1974 saw what may have been the silliest Pong clones of them all – Puppy Pong and Dr. Pong. Both featured miniature table-tob cabinets, the former in the form of a yellow doghouse. The game's history is a bit confusing. Cabinet designer Regan Cheng claims that he original concept was Snoopy Pong featuring the beagle from Peanuts in his familiar pose atop a red doghouse. Cheng also, claims however that Dr. Pong (which featured a much plainer cabinet) was the original idea.Some claim that Snoopy Pong became Puppy Pong (which featured a yellow cabinet with a generic puppy on top) after a deal to license the character fell through. Others claim that Charles Schulz's attorneys threatened to sue Atari for copyright infringement. Both Puppy Pong and Dr. Pong were targeted for doctor’s office with the idea that they would provide a much-needed diversion for waiting children. Both games offered the option of a coin box and Volleyball instead of Pong. The AtariMusem website reports that the games' only public appearance was as test units at Pizza Time Theater. Their release was announced in the August, 1974 issue of Vending Times, which claims they were on display at the AMA convention.
Note - that's the AMA (as in American Medical Association) convention, not the AMOA. 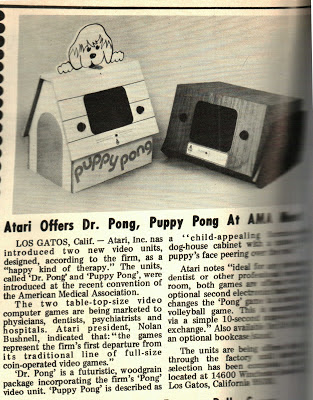 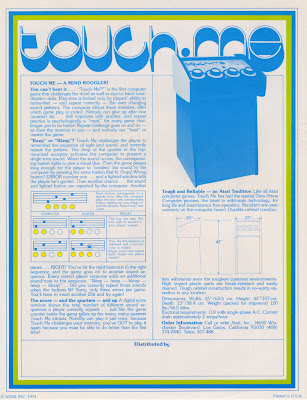 This one wasn't a video game (most of the rest of the games on the list are not) it was basically a coin-op predecessor to Simon (Simon inventor Ralph Baer, in fact, saw this game, thought it was terrible, and Simon was his improved version). Many of you probably remember Atari's own handheld Touch Me (I had one). The coin op version was designed by Harold Lee (later of Atari 2600 fame). The tech was none other than Steve Jobs. 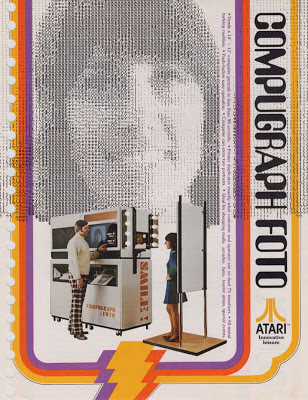 Believe it or not folks there was a time when people would pay money - good money - to have a crappy, black-and-white, computer printed ASCII photo of themselves. "Why?" you may be asking. Maybe you're thinking that they didn't have photo booths back then. Guess again.Photo booths go back to at least the 1920s and maybe the 19th century depending on what you consider a photo booth.
So if people had actual photo booths (with color no less), why would they want to use one of these things? I'm not sure.
From what I remember it was a technology thing. Back then, these things were pretty cool (actually, no they weren't but we sure thought they were).
And these the machiens themselves were expensive - very expensive. Atari wasn't the only company to make them either. PMC made one. Taito America supposedly made one (though I don't recall seeing it). My favorite was Computer Portraits by Pacific Novelty, mainly because of the ubiquitous ad below featuring a total goober having his picture taken. Is that guy excited or what? Calm down, buddy, it's just a black-and-white picture. 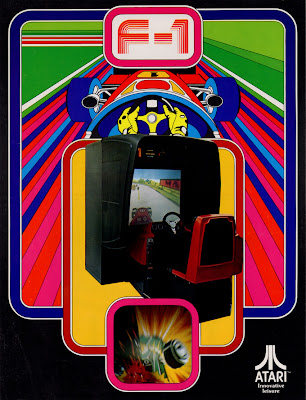 Licensed from Namco, this is one my absolute favorite types of arcade game - the projection game. These games used projected film to provide the background images. The one I remember most is Nintendo's Wild Gunman - a wild-west themed game that I saw in an arcade in a tent in the South Texas State Fair in Beaumont (the second largest state fair in Texas - which is somewhat akin to being the second most famous Oprah on the planet).
These games go back - way, way back. The first one (as far as I know) was Capitol Projector Corp's Auto Test, first made in 1954. Another one was Kasco's The Driver, which Play Meter voted best game of the 1978 AMOA show (the same show featured a little game called Space Invaders) 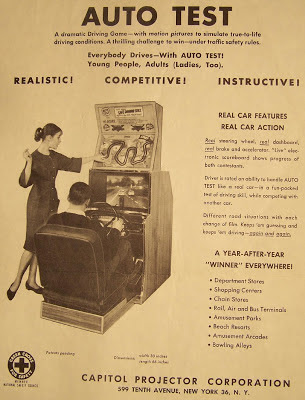 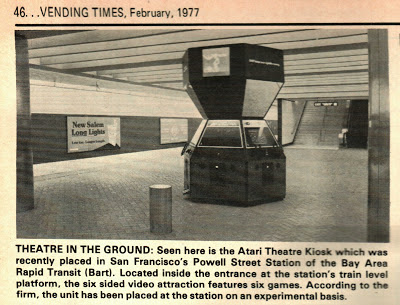 This was a unit that held six-different video games.
The one pictured above was installed at the Powell Street BART station in San Francisco circa February of 1977.
According to the January 1977 issue of Atari Coin Connection, the unit offered "...90 seconds of play, and a special 35mm slide projection system along with BART advertising panels is designed into the top structure - sequential slides present various San Francisco and Bay Area sports, entertainent, and information visuals."
A version without the top piece was also available (there's a photo in a recent KLOV forum thread). Play Meter reports that the unit was also shown at a cocktail party for distributors on March 31, 1976.

And here's another version from Elcon Industries: 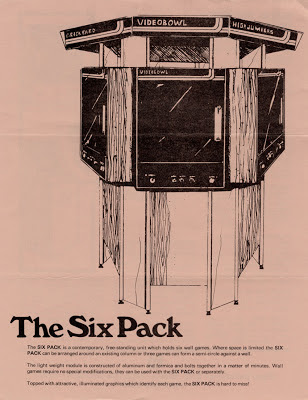 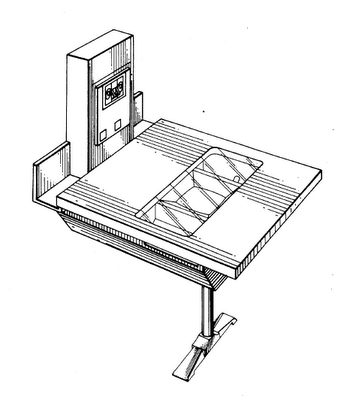 Not sure when (or if) this one was released (I think I have a Play Meter announcing it but can't find it). This was vaguely similar to a cocktail-table game but was designed to serve as a booth in a restaurant.
The drawing above is from the patent application, filed 9/23/77 by Pete Takaichi (who I believe was head of the cabient design group) and Andrew Graybeal.
Here's a similar cabinet released by - once again - Elcon Industries from the October 1981 Play Meter. 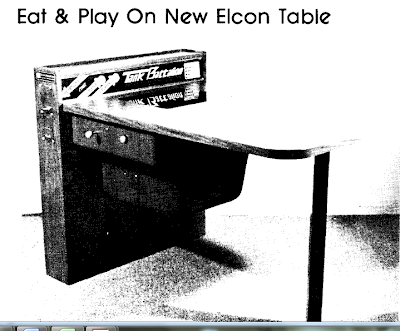 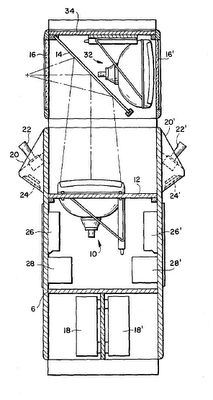 Another odd cabinet configuration. I included the drawing from the Patent application (by Roger Hector, better known for his work on Battlezone) rather than a photo because I think it illustrates the concept better. Th idea was to have 2-games in a single cabinet that didn't take up much more space than a standard cab (if any). One monitor was mounted in the bottom of the cabinet pointed upwards and the image was reflected to the player with a mirror at a 45-degree angle. A unit was on display at the 1978 IAAPA show. 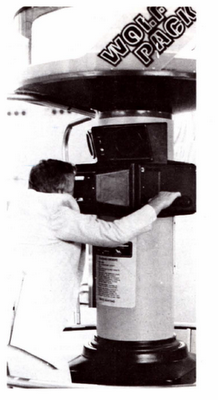 An unreleased game designed by David Sherman, Dave Stubben, Ed Logg, Dennis Koble (programmer), Jerry Lihac (hardware) and possibly a few others. The image was refleted via a 45-degree mirror through two pieces of glass with water between them. It had torpedo wakes, digitized speech (possibly the first video game to have it) and more.
The above photo (taken from Play Meter 12/77) is from the IAAPA (International Association of Amusement Parks and Attractions) show in New Orleans. Three units were built. One was at the Great American Amuseument Park in Santa Clara. 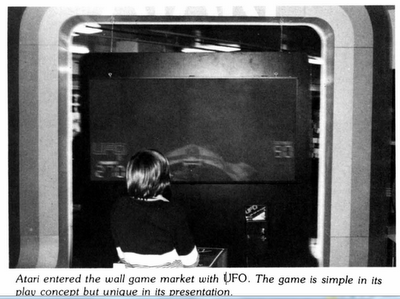 I just love nine-day-wonders and this is an example of one of my favorites. UFO was Atari's lone foray into the wall game market. The above photo is from the 1978 AMOA show. What's a wall game? youre probably asking.

Almost totally forgotten today, wall games were a short-lived phenomenon whose brief heyday occurred roughly in the period 1971-1975 before video games made them all but obsolete. Found almost exclusively in bars wall games, as the name implies, were mounted on walls. The “games” were about 3’ x 5’ and only 5-8 inches deep and consisted of a large plastic backglass covered with colorful art with a series of glowing light bulbs behind it that could be “controlled” via a pair of infrared remote control boxes that usually consisted of a single button.

Gremlin was the undisputed king of wall games (they orignally produced nothing but and at one point they had 95% of the market). Other companies that made them include Midway, Sunbird, PMC, and Meadows games. See www.wallgames.com for more info. To see trapshoot in action, checkout this YouTube video: http://www.youtube.com/watch?v=roRieYcPlLw 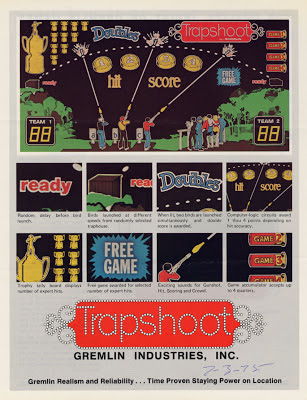 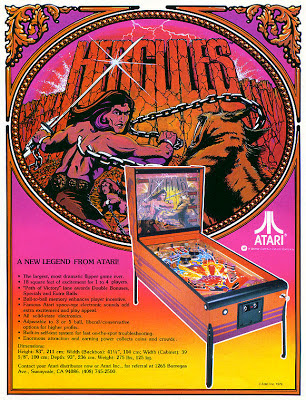 
Haliburton got a 5% royalty on sales of the game in exchange for providing a prototype, parts, and consulting services. Atari's Steve Bristow claimed that the prototype was helpful, but not essential in the design of Hercules

A recent thread on the KLOV forums had a photo of the following (though this is a better one). The picture is from Atari Coin Connection and the unit was on display at the Alabama Space and Rocket Center. 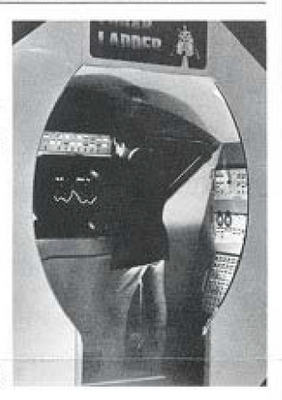