Video Game Mythbusters - Was Rally-X the Hit of the 1980 AMOA?

There are number of well-known legends associated with various arcade video games of the 1980s. Perhaps the two games with the most are Pac-Man and Donkey Kong. With the latter there are legends about the origin of the game’s name, the main character’s name, the involvement of Ikegami Tsushinki, the game’s Popeye origins etc. With the former there's the pizza legend (discussed earlier), the release date, the question of when and if the enemies were referred to as ghosts and so on. One story about Pac-Man that has oft been repeated is that when it debuted at the 1980 AMOA show in October, the industry pundits liked Namco’s other game Rally-X better. In fact, the story goes, Rally-X was the hit of the show. Here’s a typical version from Steven Kent’s Ultimate History of Video Games:


“Buyer and analyst response at the October AMOA show further confirmed that Rally-X was the best game in the group. Of all the video games at that show Rally-X received the most favorable comments.”


Note that the “group” mentioned here refers to the four games introduced by Namco: Pac-Man/Puck-Man, Rally X, Tank Battalion, and King & Balloon. There are actually two (or three)  separate claims here: 1) that Midway liked Rally-X best of the four Namco games and 2) that Rally-X was the hit of the 1980 AMOA. Both stories are often used to illustrate either the myopia of industry executives or the revolutionary nature of Pac-Man (a third claim is that the industry in general preferred Rally-X to Pac-Man)


Let’s look at claim 2) first. This one should be pretty easy to check. I have the relevant issues of RePlay and Play Meter, the two premier industry journals of the time, so if we want to know what the industry thought, those are the key sources of information. 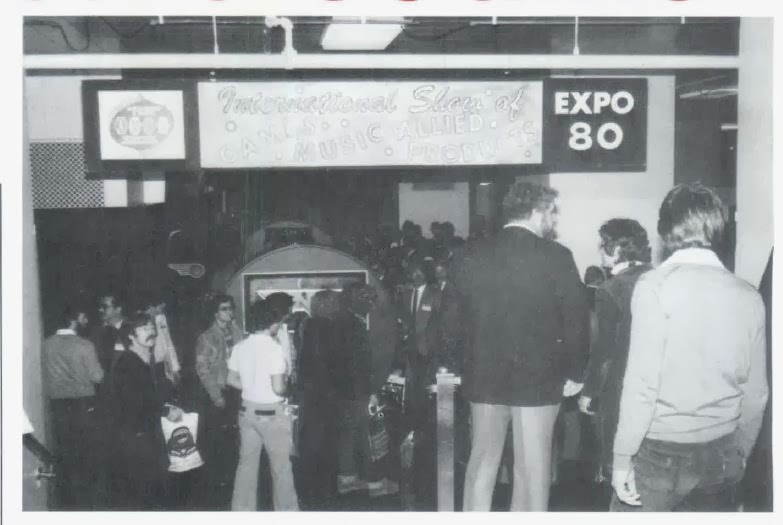 First, however, a word about the 1980 AMOA show, and the show in general. For those who don’t know, the AMOA (Amusement and Music Operators of America) expo was the premier industry show in the U.S. in the 1980s (and probably from the 1960s to at least the 1990s). The 1980 show was a pretty interesting one in terms of coin-op history. Other than Pac-Man and Rally-X, games making their debut at the show included Battle Zone, Berzerk, Defender, Crazy Climber, Spectar, Star Castle, Space Panic, and Moon Cresta.


So, which games were considered the hits?

Play Meter covered the show in its 1/15/81 issue, which actually had three separate articles, reviewing the show.
First was an article by Dick Pearson titled "Play Meter plays the games"
Unfortunately, Pearson didn't name a standout game, noting "But since Space Invaders, we have seen something new added to the games, which makes it all the more difficult to pick a 'Game of the Show." He then goes on to further discuss how difficult picking standout games is and doesn't name a game of the show.

Hmm. He doesn't seem to favor one over the other. Plus he also mentioned a lot of games, so this article may not be of much help.

Later in the same issue we have Dick Welu's show diary. Welu is much more forthcoming with what games he liked and disliked.
He calls Star Castle a "honey", was lukewarm on Space Panic, and liked Battlezone.
His pick for game of the show? 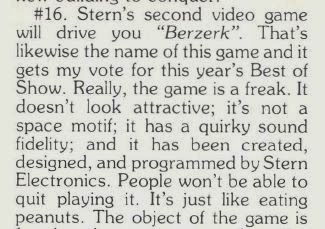 OTOH, he did pick a Bally/Midway game as "sleeper" of the show. Which one? 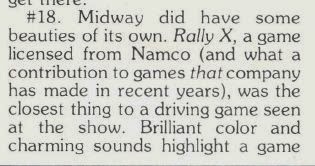 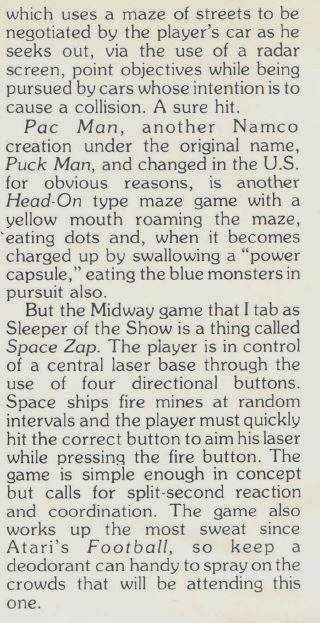 Yep, he picked Space Zap (!!???) as sleeper of the show. Now don't get me wrong, I loved me some Space Zap back in the day, but sleeper? Really?

Finally, we have the article "An Independent Review: Standout games at Chicago Show" by Tony Licata. Ahh. This is just what we're looking for. He actually picks four standout games of the show.
And they are....
Battlezone

OK, so it looks like Play Meter didn't consider Rally-X the standout game of the show, or even significantly better than Pac-Man.
What about RePlay? 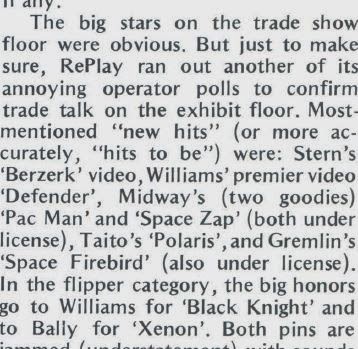 No Rally-X there, but he does mention Pac-Man and (once again) good old Space Zap.
Here's another review from the same issue.
﻿

What about the other claim, that Midway initially liked Rally-X more than Pac-Man? That claim actually does hold water. Midway president Dave Marofske said as much to Kent. When I talked to him circa 1999, he told me pretty much the same thing:


[Dave Marofske] When we went to Japan there were four games, I believe, that were shown. Atari, ourself, and many others had looked at the games and talked to Namco about licensing them. The one that Mr. Nakamura and company felt had tremendous potential was Rally X, which was a maze driving game. They also had Pac-Man, which they called Puck Man. They also had a tank game, which I think was called Red Tank or maybe just Tank and they had a game that they called Red Balloons or something similar. They said they were not going to licensing all four to any one company and, in fact, they were leaning towards releasing them to four different companies. Rally X seemed to be the one that kept getting touted but we sort of thought there were two strong games and the other one was Pac-Man. I don’t think anyone on our side, and obviously nobody on their side at that time knew which was going to be the stronger game but we felt they both had strong potential.


Far more interesting was a story that Game Plan exec Ken Anderson told me. First, a little background. In the end, Namco chose to license the four games to two different companies. Midway got Rally-X and Pac-Man, while Game Plan got Tank Battalion and King & Balloon. Ken Anderson was an executive at Game Plan at the time and over the years it seems he worked for half the manufacturers in the industry. How did Midway end up with Pac-Man? Here's what Anderson told me


Now I don't know if that's true or not and I haven't confirmed it but if it is, it has to be one of the all-time great whiffs (though, of course, it's easy to say that in hindsight).
Oh, and did you notice the raves about Space Tactics in the above articles? What's the deal with that one? For those who don't know, it was a huge cockpit game from Sega that used an elaborate system of gears, motors and pulleys to rotate - not the cabinet, or the player's seat, but the monitor (which was actually mounted in the bottom of the cabinet and reflected via a mirror, so they may have rotated the mirror). It also had LED lights to display various player stats as well as a steering wheel with a thumb button, plus six other buttons. One person called it the most over-engineered video game in history.
Finally, here's some more pictures form the 1980 AMOA show. 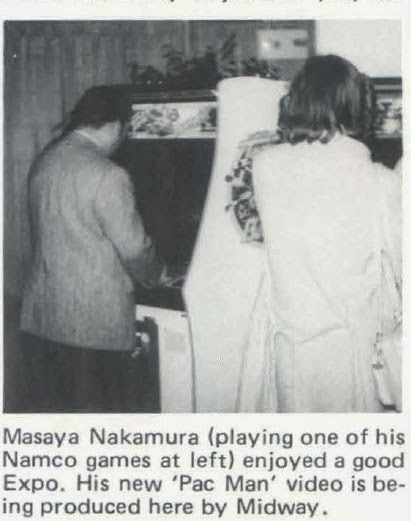 Hmm. Is that Namco founder Masaya Nakamura playing Rally-X? I thought so at first, but can't tell for sure. It looks like the game starts with a "T" but it doesn't look like a Tank Battalion cab. 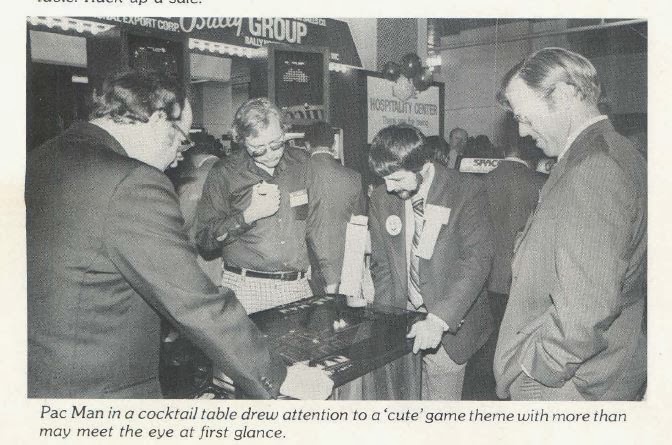 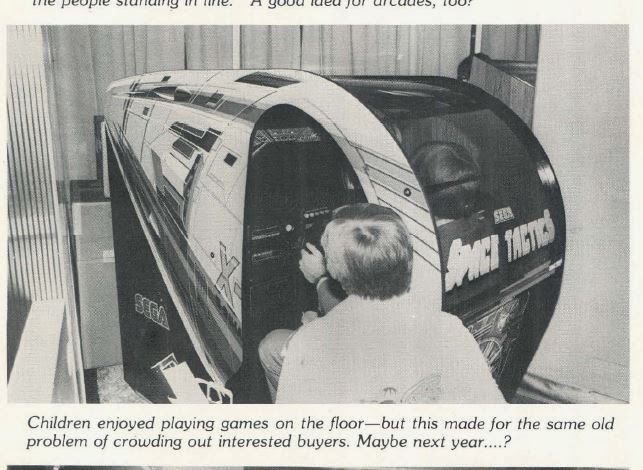 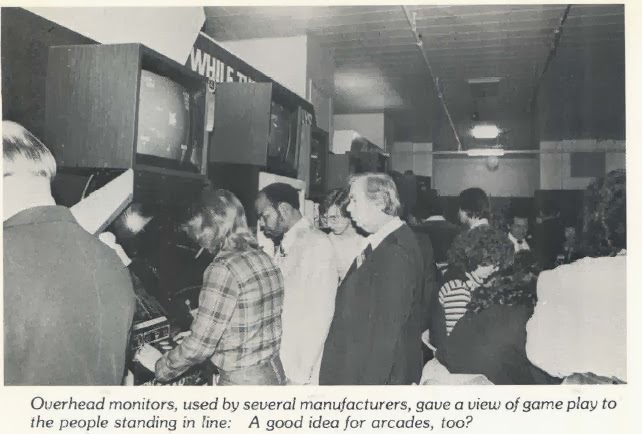 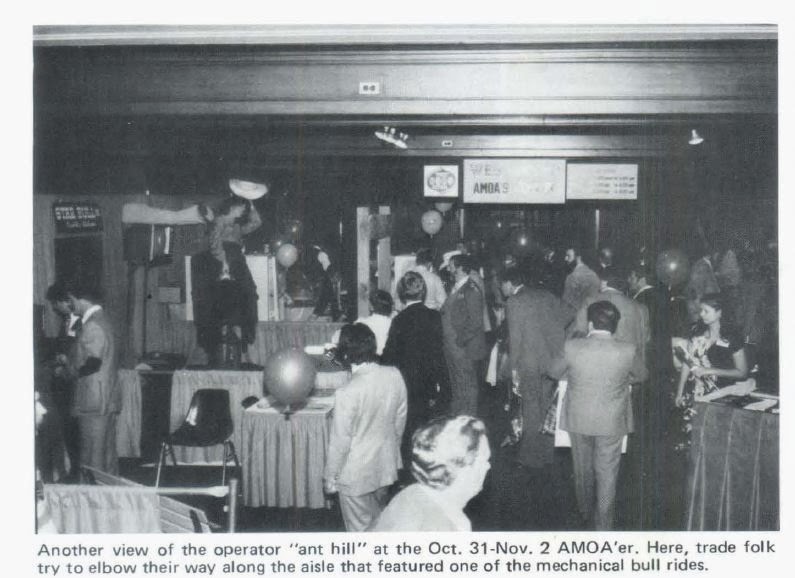 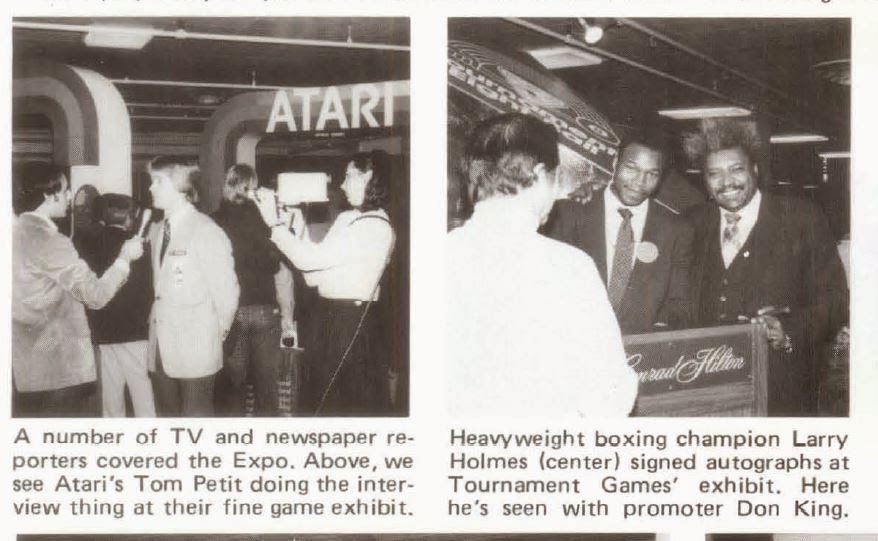 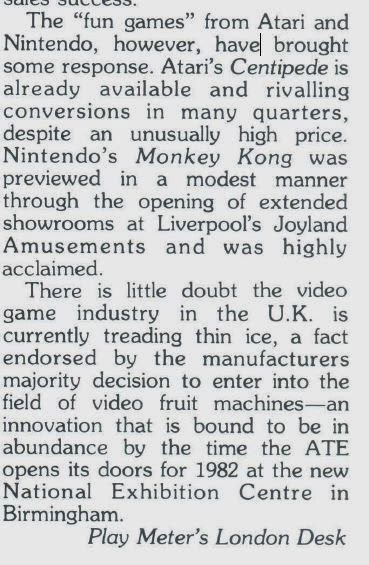 What? Monkey Kong? So is the "busted" myth not a myth after all? Have I found holy grail of video game mythbuster-busting? Alas, I think not. I'm pretty sure this is just a good old fashioned typo. RePlay referred to the game as Donkey Kong the month before this issue came out and may have done so earlier. But it did give me a brief rush of adrenaline.
Posted by Keith Smith at 9:18 PM