In earlier posts, I’ve made brief mention of Reiner Foerst’s Nurburgring and Micronetics’ Night Racer as predecessors to Atari’s Night Driver. Today I thought I’d begin to flesh out the story of these games, as well as a number of others that appeared around the same time.
(NOTE that much of the information on Nurbrugring came from the Lance Carter’s History of Racing Games at historyofracinggames.wordpress.com)


Of all the many video game genres, perhaps none (other than the ball and paddle game) is more venerable, or popular, that the driving game. The first driving video game was probably Atari’s Gran Trak 10 (March, 1974). It was followed by a number of similar games between 1974 and 1976, including Taito’s Speed Race/Midway’s Wheels, Electra’s Pace Car Pro (perhaps the first true color driving game), and a dozen more games by Atari/Kee (including 1975’s Hi Way, which included a built-in seat that allowed the player to sit down while playing). These games, however, all featured a top-down perspective rather than the first-person perspective that later became de rigueur. First-person driving games had actually been around, in electromechanical form for years (and driving games in general had been around for even longer – the first may have been Canova and Thompson’s two-player bike racing game Automatic Cycle Racer in 1897). In 1941, the International Mutoscope Corporation (more famous for its peep shows) released Drive Mobile – a driving game that included a rotating plastic drum with the images of a two-lane road clogged with traffic. The player used a steering wheel to maneuver a small plastic car to avoid the traffic while an electronic map of the U.S. tracked his cross-country progress. The following year the company released a two-player variant called Cross-Country Race with the display showing the progress of the two cars on a twisting route from New York to Los Angeles. The early fifties saw the appearance of games with display screens showing 8 mm movie footage of actual traffic such as Capitol Projector's Auto Test (1954 - some sources say 1959) and Turnpike Tournament (1959). In the 1960s, in games like Chicago Coin’s hugely popular Speedway the player maneuvered a plastic car along the projected image of a track produced by shining light through a transparent plastic/nylon disc. 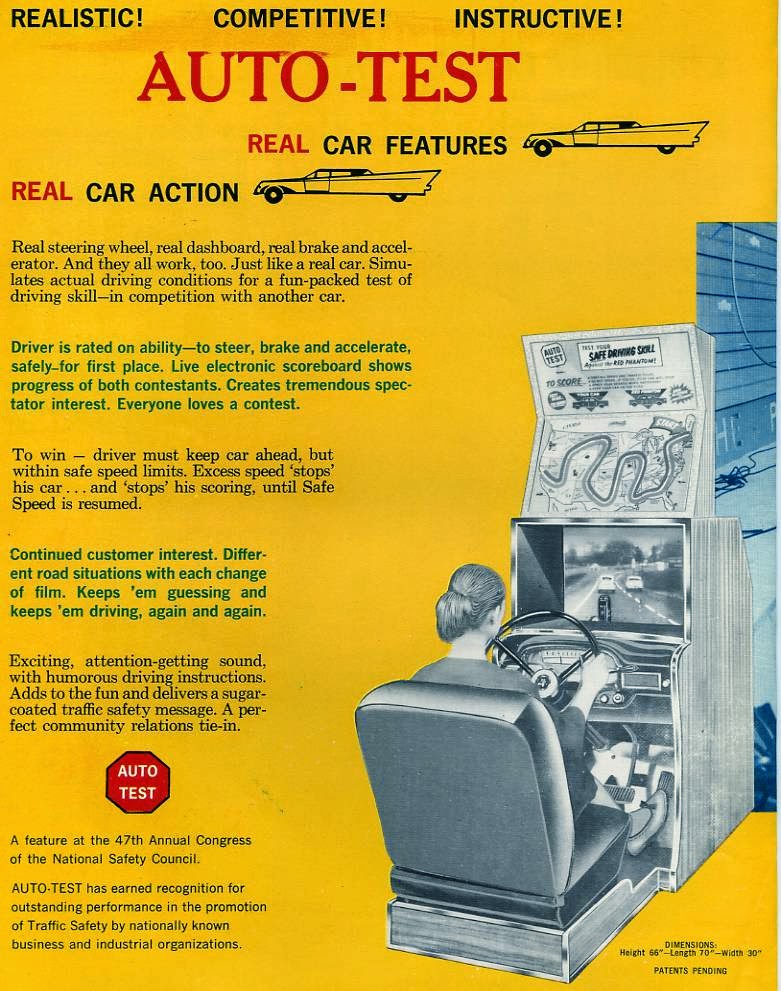 The first-person driving video game would have to wait, however. Ask people what the first such game was and many would probably mention Atari’s Night Driver (October, 1976). In truth, however, Night Driver was preceded by at least four other games with almost identical game play. The granddaddy of them all was actually produced not in America, but in Germany and was started three years earlier: a game called Nurburgring by Dr. Ing- Reiner Foerst. 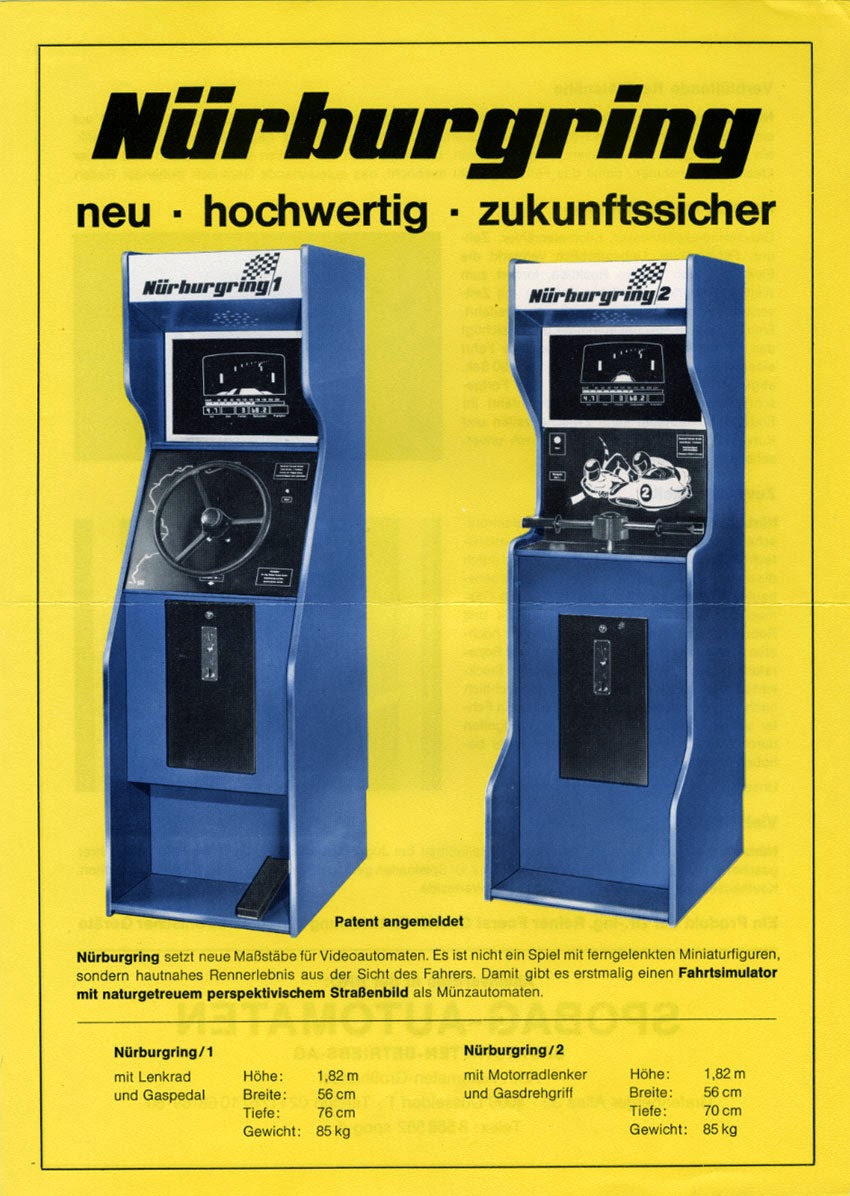 In 1971 Reiner Foerst (then 38) took a job as director of a German wire-manufacturer called Trakus.  At the time, companies had just begun to explore the use of driving simulators in research. In 1965, the American Society of Mechanical Engineers had published a report describing such a simulator that used color film footage along with realistic sounds and vibrations to reproduce the driving experience. The system, however, was not interactive. In 1966, the Human Resources Research Organization designed a similar system. With a background in simulation, Foerst decided to capitalize on this growing market by creating the best driving simulators in the business. To do so, however, he needed money and to do that, he decided to create a coin-op driving game. Examining the patents of other companies he found that Volkswagen and British Petroleum had both created simulators. The BP system, however, used a projection screen system and Volkswagen used a large oscilloscope (along with a motion system that allowed limited movement), both of which were too expensive for a game.

Frustrated, Reiner slapped together a prototype using light bulbs to create a crude display, but the resulting product didn’t work very well. When Pong exploded onto the scene in 1973, Foerst knew he'd found a better solution and by the end of the year he was at work turning his prototype into a video game (that same year, he filed or a US patent on a tic-tac-toe like game). The first version was finished in May of 1975 and placed on location in an arcade in the university town of Giessen where it did well. Encouraged by the success of the prototype, Trakus provided more funding and the first two production units were completed by March of 1976 (when they were shown at the International Exposition for Coin-Op Games in Berlin). Production began soon after at a rate of one machine per week. Dubbed Nurburgring 1 (after the famed German race track built around the mountain village and castle of Nurburg in the 1920s) it featured almost 1,500 components, including a rack stuffed to the gills with a whopping 28 circuit boards. While the visuals were sparse (consisting almost exclusively of a series of white posts along the side of a virtual road, the first-person perspective gave the game level of realism unseen in a video driving game. Adding to the immersive experience were the game’s sounds, which included the roar of the engine, air whistling by the car, crashes, and screeching tires. The engine sounds grew louder the faster you drove and more hollow when the brakes were applied.

Realistic as it was, the game was also expensive, and complicated, which is why Foerst could only afford to produce one machine a week – even though he realized this would allow other coin-op games to copy his idea. Before long, Foerst’s fears were realized. It started when Foerst paid a visit to a bowling alley to check on one of this games. While there, he met a young video game technician from America named Ted Michon. The meeting would change the course of video game history (but that story will have to wait until part 2)