I categorized today’s post as another in my “literary history” line, but it really isn’t. It’s really more one of the earliest attempts at forming an e-sports league. Actually, there is a book involved. But this time, not only have I not read it, but I’ve never even seen a cover for it and I’m not sure it actually existed.


The book in question is Age of the Video Athelete, supposedly published in 1984 by Dennis DeNure of the Video Athlete Corporation. We’ll get to Dennis and his organization in a bit, but first, did this book exist? Aside from Google Books, it is listed at Barnes & Noble’s website with an ISBN, so apparently it was. It was also listed in the bibliography for a book called Reading: Programs For Young Adults. So what was the book about, who was Dennis DeNure, and what was the Video Athlete Corporation?


Let’s start with the last. I’ve actually touched on this in an earlier post, but Video Athlete Corporation was an early attempt at creating an association for video game players and to promote video games as a sport. It was either AKA the American Video Athletic Association, or the AVAA was part of it.


Video Athlete Corporation filed for incorporation on April 5, 1982. At the time, it was located at 120 W. Mifflin Str in Madison and the “registered agent” was John DeNure. The next mention I found of it was this ad for a video game tournament from the May 21, 1982 Madison Wisconsin State Journal. 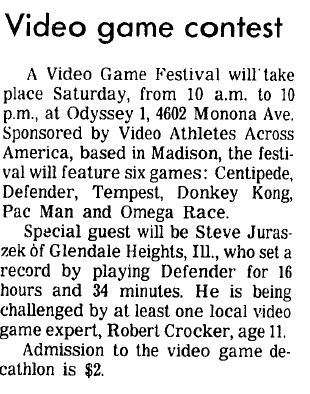 Note the mention of Defender champ Steve Juraszek, of Time magazine fame. I’m sure most of you haven’t seen that ad, but a few of you might remember the ad below, which ran in the July and August, 1982 issues of Electronic Games. 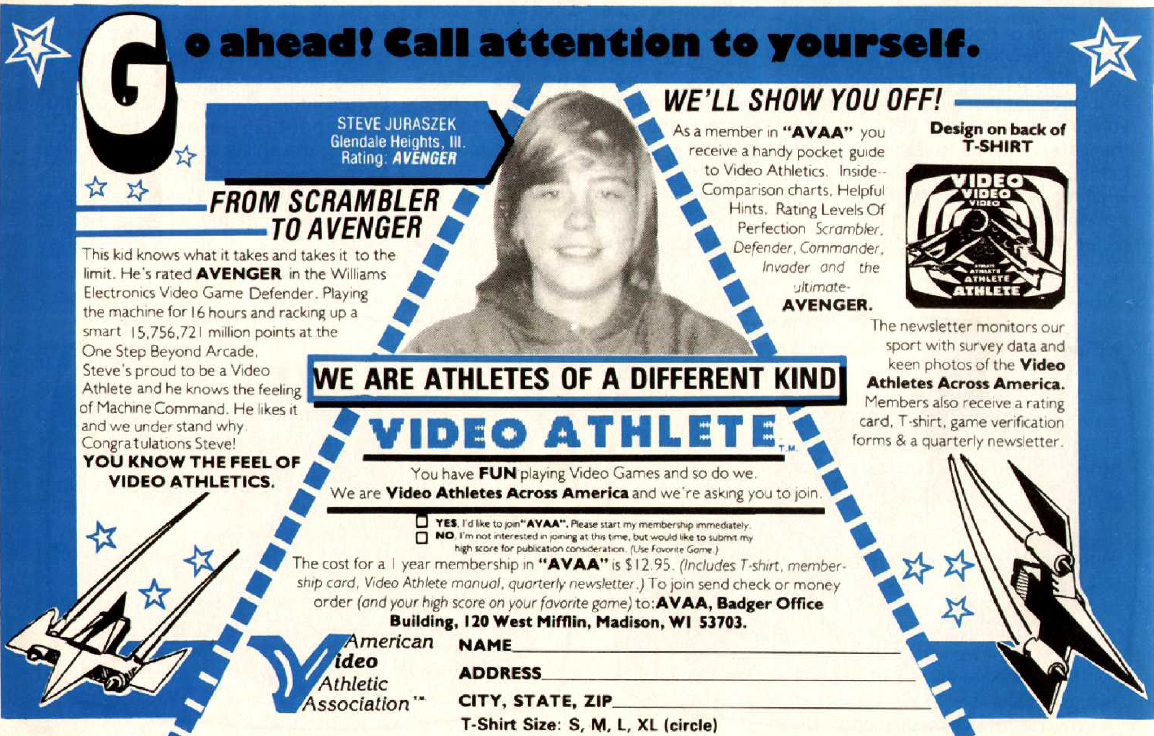 Here is an interesting picture from the August 1, 1982 issue of Play Meter. Note the AVAA logo on the T-shirt. 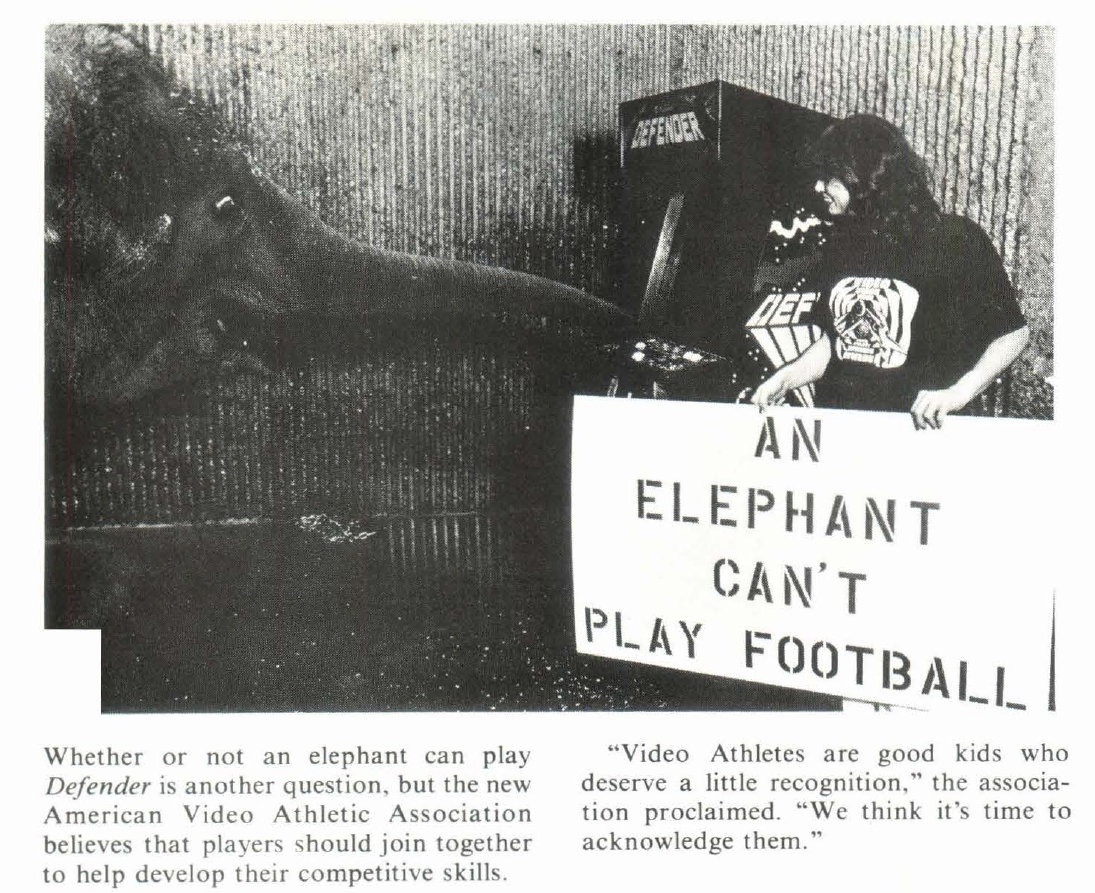 The same logo appeared in this article from Vending Times (I couldn’t’ find the date). 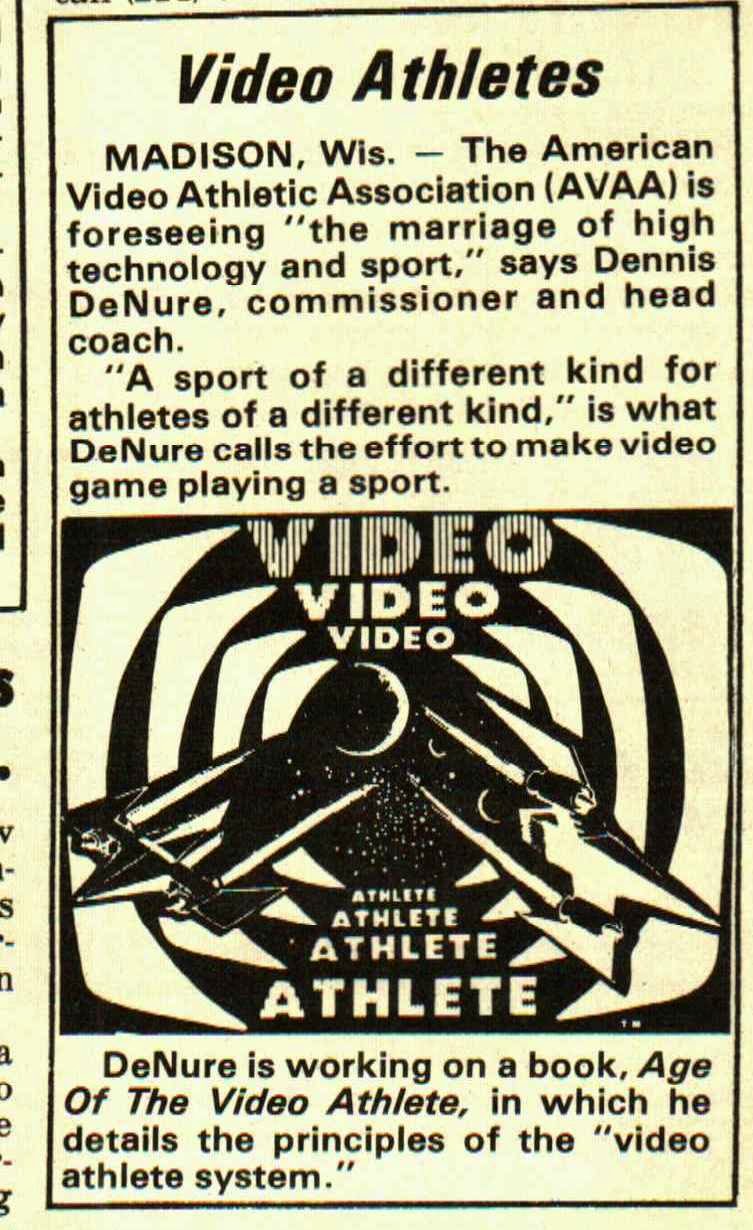 The June 1, 1983 Play Meter, discussed DeNure’s book and organization further. The 98-page book was a manual on promoting video games as a sport and gave details on running sanctioned “Video Game Festivals”, including sample radio ads, and other info. DeNure claimed that his organization would allow individual arcade operators to share national promotions, including personalized ads, for video game tournaments. He also suggested that players be nationally recognized for high scores on video and pinball games and proposed a quarterly newsletter for AVAA players listing everyone who achieved a high score on one of 15 selected games per month in member arcades (which he suggested would pay a $500 membership fee, bought through distributors). Other ideas included a syndicated comic strip, video game triathlons, and an arcade t-shirt with a special pocket for tokens. “Somebody’s going to organize video game play into a sport,” DeNure said, “and I want to be the guy to do it."
Here's the AVAA logo, as it appeared in that article. 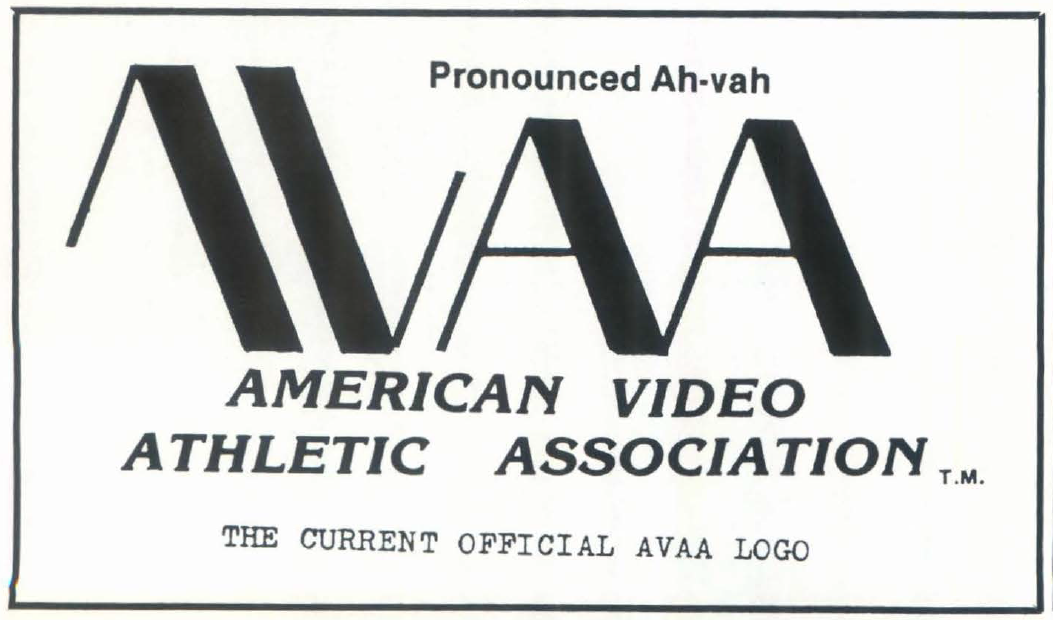 Earlier, in a letter that appeared in the April, 1983 issue of RePlay, DeNure explained “The Video Athlete is an athlete of a different kind, who uses his skills in exercise, practice, and persistence in winning the good things in life openly and with pride.”


So whatever became of the AVAA? Not much, I think, as it pretty much seems to have disappeared by 1985. Still, it was an interesting idea - perhaps one ahead of its time?


And what about Dennis DeNure?


According to his own biography, he was born John Michael DeNure in 1956 in Platteville, WI (“home of the world’s largest M symbol”) but changed his name to Dennis Amadeus de Nure in 1985 after watching the movie “Amadeus” (though the film came out in 1984, and he was using the name before that). On his site DeNure claims that he came up with the idea for Video Athletics in 1982, when he was playing Pac-Man at bars and thought “how neat it would be to turn video game playing into a sport that I trademarked”. While he did trademark the name, he says that he “could not interest the coin-op industry in Chicago to go for the concept.”


Sadly, while DeNure promised to later blog “specifically about my vision for taking video game playing to the next level – the American sporting level”, I was not able to find any blog post on the subject.


What about DeNure’s career after the AVAA? I actually found a lot of info online, most of it about his mayoral candidacies (and most of which I didn’t read), but here is a brief synopsis.


The next reference I found to him is from 1985 when Madison papers report that he was running a shoe shine stand near the state capitol. 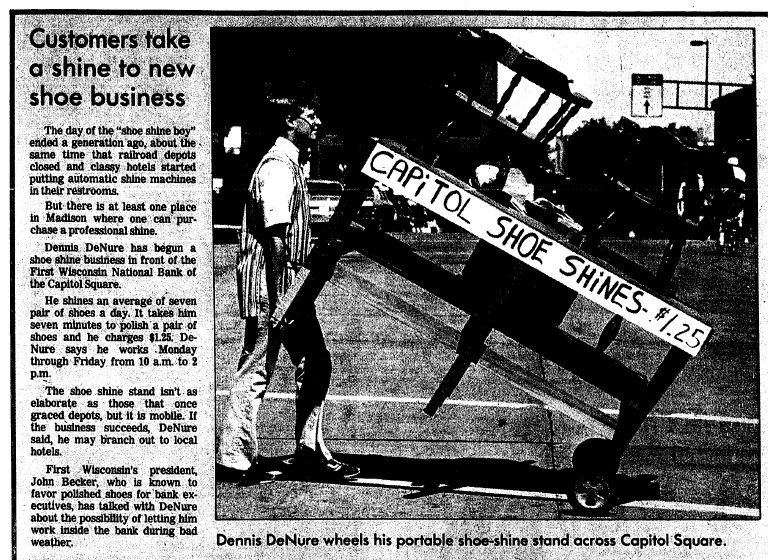 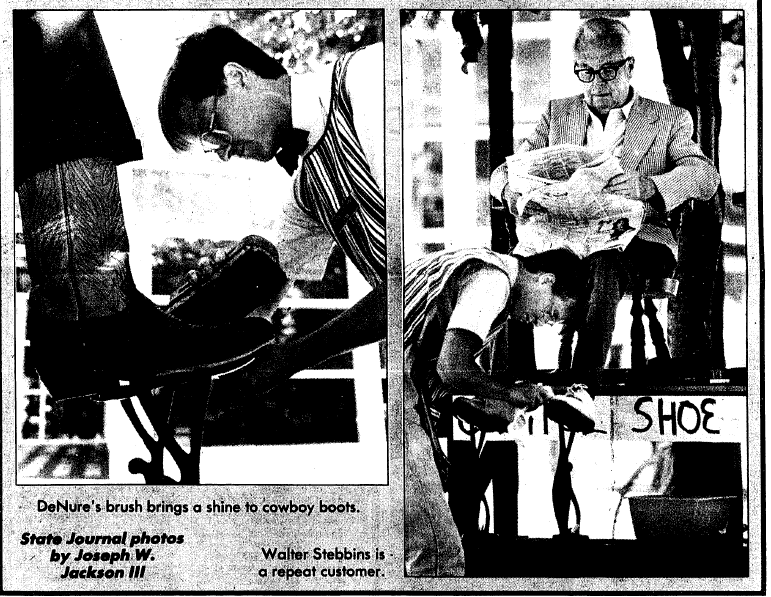 In October, 1986, the Madison Capital Times reported that the “self-described entrepreneur” was pushing to have the state motto changed to “Eat Cheese or Die”. He also got what he called his “first big break in the T-shirt business” selling a t-shirt with the same slogan.  According to this site DeNure had been selling t-shirts since at least the early 1980s, when he began selling them out of a box on the State Street mall. The site claims that one of DeNure’s first shirts, showing a picture of a cow’s rear end with the motto “Wisconsin, come smell our dairy-air”, was actually created by another t-shirt vendor named Larry Castle. 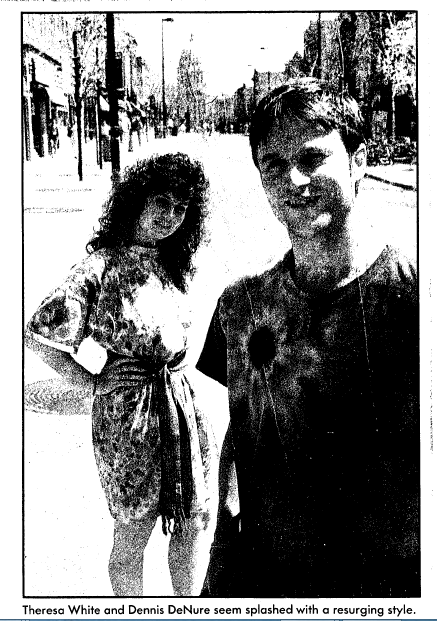 In April, 1987 the Wisconsin State Journal reported that he was running a shop called DeNure’s T-Shirt Factory and 60s Museum at 555 State Street (another article claims he started the shop in 1984), selling tie-dyed T-shirts and 60s memorabilia. Two months later, the Journal reported that DeNure’s “travelling cow cart” had been robbed of its entire inventory of cow-themed t-shirts, bearing slogans like “Cows are udderly cool”. The cart was mounted on a snow mobile trailer that DeNure pulled around the state with his van to various farm events.


Lane in 1987 (if not earlier), DeNure launched his political career with a run for Dane County Executive, at one point explaining that he “"believed that most human evil is the result of sexual repression,” and that “Dane County Human Services (should set) its work on fostering enjoyment and acceptance of the human body...". In early 1988, he pleaded no contest and was fined for hurling apples at a Richard Haas mural being painted at Olin Terrace . Late that year, he entered the race for mayor. 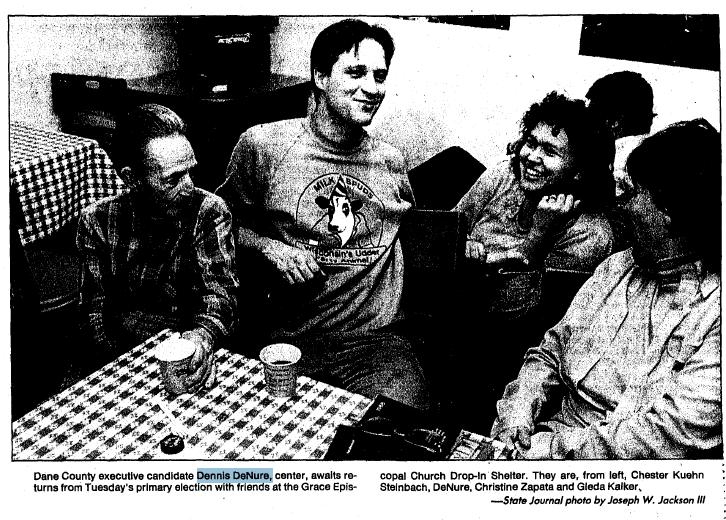 For 12 years (apparently starting around 1993) he ran a store in Madison called Game Haven that sold Magic the Gathering and Pokemon cards, as well as Beanie Babies.


In 2002, he served a two-year sentence in Iowa for drunk driving. After he was released, he planned (according to the site above – though one assumes it was tongue-in-cheek) to write a book called “Confessions of a Drunk Driver” and to offer his “prison art, prison read books, prison unopened mail, prison clothes, prison commissary souvenirs, and before prison tortured beanie babies for sale in the spirit of helping Wisconsin Senator Russ Feingold become President”.

As of this writing, he is apparently still designing t-shirts and pushing for one of his other big ideas – the Museum Mile.