The Prehistory of esports - The First Video Game World Record?

In today’s post, I take another look back at what I call the “prehistory” of esports. I have tackled the subject before in posts about the American Video Athletic Association, the Atari $50,000 Centipede tournament, the Electronic Circus, the 1974 All Japan TV Game championship and others. Sadly, this era is barely covered in what few histories of esports have appeared (and there have not been many). And in the few instances where it is covered, it is not covered in any depth. For instance, aside from the Centipede tournament, I have never seen any of the topics above even mentioned, much less covered in even cursory detail.
Today, I cover another possible seminal moment in the history of esports that I have never seen mentioned. Actually, I did not discover this one on my own. Marty Goldberg brought it to my attention when he sent me a short UPI article on the incident, prompting me to investigate further. So what is the incident? It was possibly the first serious attempt – or maybe the first attempt period – at a video game world record.


No, I am not talking about Steve Juraszek or Greg Davies or Atari’s 1980 National Space Invaders Championship. This one goes all the way back to May 1975 where Roger Guy English tried to get into the Guinness Book of World Records by playing a video tennis game for seven days straight – or possibly five (the details are a bit hazy as we shall see). Actually, English was already in Guinness – or about to be – at the time he made the attempt, as you can see from the UPI article below.


This article appeared in a number of papers around the country, but this is the earliest one I’ve found. It's from the May 11 issue of the Hayward Daily Review. It's also the one Marty sent me. English also claims that he once had a record for setting the most world records with nine (including the record for most records itself). But before we get into the details, let’s backtrack a little. 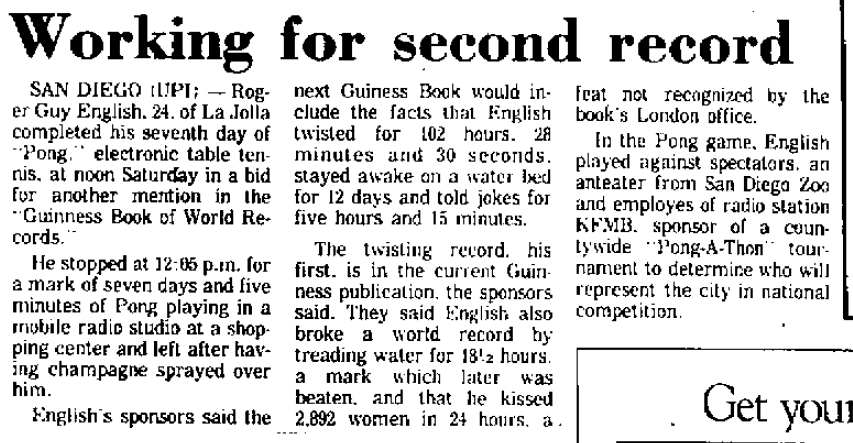 So who was Roger Guy English? English was born in 1950 and at the time of the attempt, he was living in La Jolla (a neighborhood in San Diego). One of English’s first loves was movies. In 1959, he started collecting movie posters after he got a poster for On the Waterfront from a local theater. By 1970, he had amassed a collection of 10,000 of them. He also had a movie museum in his garage and made annual trips to LA to see the Academy Awards, sometimes brining along a carload of friends. Hoping to make a career out of his passion, English studied cinematography at Mesa College in San Diego – though I don’t know if he graduated. He later studied literature at University of California, San Diego and wrote two, apparently unpublished, novels (one called “Don’t Stop the Rock”). Perhaps Roger’s first taste of national fame came in 1970 when he and a cousin hiked 2,000 miles from San Diego to Vancouver, British Columbia to promote ecological awareness. The trip took just over two months and earned mentions in a number of newspapers.


In 1974, Roger was running a store in Pacific Beach called American Graffiti that sold nostalgic memorabilia. According to English, the incident that led to his year a serial record breaker came when a friend who owned a nightclub called and told him that the club was going bankrupt and asking for help. After racking his brain for weeks English came up with the idea of setting a world record for dancing the twist in the nightclub. Just as he was about to start, however, the police told him that there was a state law prohibiting anyone from doing anything for more than eight consecutive hours in a 24-hour period. Relieved, English called the attempt off, but when the story made headlines and people began organizing protests at the county courthouse, English decided to defy the police warning and go ahead with the attempt. From July 11 to 16 1973, he spent 102 hours, 28 minutes, and 37 seconds twisting the night (and the day, and the night and the day…) away and the resulting publicity made him a local celebrity. The attempt was later the subject of a question in Trivial Pursuit, Baby Boomer Edition.


Before long, others began calling English asking him to do similar publicity stunts to promote their businesses. For his second stunt, he decided to break the record for voluntarily going without sleep, which was then 11 days, 18 hours, and 55 minutes by Bertha Van der Merwe of South Africa. This time, the goal was to promote a local store called the Love Shop Waterbed showroom. English broke the record by staying awake for 12 days on a waterbed in the window of waterbed store from 10:30 a.m. on March 20 to 10:30 a.m. April 1, 1974.

After that, he set his sights on the record for treading water to promote the heart association. After just five minutes, he was exhausted and thought about giving up. If he did, however, he would lose the momentum he had built up. So he pressed on and treaded water for 18½ hours. If it was a record, it did not last long. In August 1975, Pete Bahn Jr. shattered the record by treading water for 41 hours and 11 minutes.
In late April 1974, English participated in the Oddball Olympics in LA where he tried to set a record by singing for 75 hours – though it appears that he was not successful. Another unsuccessful attempt involved kite flying. If treading water had been difficult, another record was anything but when English kissed 3,000 girls in 8 hours[1]. For his next feat, starting in August 1974, English swam the length of the Mississippi River from Minneapolis to New Orleans - though it is not clear if he finished. On December 27, 1974, Bank of America paid English $500 an hour to tell jokes for five hours and 15 minutes at the Winner’s Circle Lodge north of Del Mar. He claims he did not get a single laugh.

In the spring of 1975, English decided to set a new marathon record involving one of the latest crazes that was then sweeping the country - video games. For his video game attempt, English set up shop in a mobile radio station at a shopping center, where he spent seven days and five minutes (though English says it was five days) taking on all comers before calling it quits on May 10. During his marathon session, English squared off against over 30,000 spectators, an anteater from the San Diego Zoo, and employees of KFMB radio station. English claims that he got so good at the game that he was able to beat two opponents at once while playing only with his toes.
The big question for me is what game English played. Was it an arcade game or a home game? The above article refers to th game as “Pong” but it is unclear if they meant Atari Pong or Home Pong or some other Pong clone (the term "Pong" was sometimes used for ball-and-paddle games in general).. English claims that the attempt was intended to promote the introduction of the game. This makes it unlikely that it was Atari Pong and the date also seems a bit late for Home Pong. It could have been that he was doing a promotion for a department store etc. that was introducing a new console. If it was an arcade game, the May date and the fact that it was in San Diego make me wonder if it could have been Cinematronics' first game Cinematronics was founded in April, 1975 and could well have released their first game around this time.
Perhaps even more interesting is the UPI article's claim that KFMB was the “sponsor of a countrywide ‘Pong-a-Thon’ tournament to determine who will represent the city in national competition.” Could this have been the first nationwide arcade video tournament in the US? (there was one in Japan in 1974). I've always suspected that there must have been at least a few Pong tournaments somewhere. Unfortunately, I have found no other reference to this one and am suspicious that it ever existed. The name 'Pong-a-Thon' sounds to me like a description of English's record attempt itself. On the other hand, the article specifically mentions a "national competition."
As for the record, while English indicates that it made it in into Guinness I could not confirm that it did. I did not find it in the 1975, '76, or '77 editions. I could only find three records for English in the 1977 edition (staying awake, twist dancing, and kissing) and found no mention of a video game record of any kind – though I could have been looking in the wrong spot. Whether it made the official record books or not, however, it may well have been the first attempt at a world record involving video games.

Note – for more information on Roger, you can watch 2006 documentary “The Spectacle Artist”: https://www.youtube.com/watch?v=g5l1LzoYSD0. He discusses the video game record at the beginning of part two.

Aside from the article above and Guinness, primary sources include several issues of the San Diego Union. Oddly (given that the attempt was made in San Diego), while I found a number of articles on English’s earlier attempts in the Union, I didn’t find one on his video game attempt, or any articles on him at all in 1975 or 1976. Perhaps it is an issue with Genealogybank’s indexing of those issues.
[1] English claims that the kissing record was his eighth record (which automatically gave him his ninth record for most world records) and that it occurred after his video game and swimming records but the record was reported in an April 29, 1974 newspaper story. The Guinness Book of World Records included the record, but did not indicate when it occurred. The UPI story claims that English kissed 2,892 women in 24 hours but that Guinness rejected the attempt – though this seems to be false given that the record was in Guinness.