Today’s post completes my recent trio of computer game posts (don’t worry. I’ll get back to coin-op games soon enough) with a look at one of the most interesting and little-known “video game” competitions of the 1980s – the 1982 “Wizard vs. Wizards” computer game tournament. I’ve actually briefly covered this one before but thought it merited a full post. Despite the fact that the competition was covered in Steven Levy’s 1984 classic Hackers, however (it even provided the title for chapter 20), there is almost no information on the web about the contest, its organizer, or its participant. Luckily, however, it was covered in some detail by both Softline and Softalk. 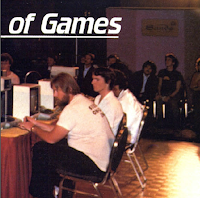 So what was Wizard vs. Wizards? It was a competition between twelve different computer game programmers that was held at the Comdex show in Las Vegas in December 1982. And get this – it was supposed to be televised as the first event in what the organizer would sure would become the spectator sport of the 1980s. While it was filmed, however, I don’t know if it was actually televised. If it was, it likely would have appeared several months before Starcade broadcast its first episode (though well after the first Starcade pilot was filmed). It was also yet another episode in the sadly-neglected early history of eSports. 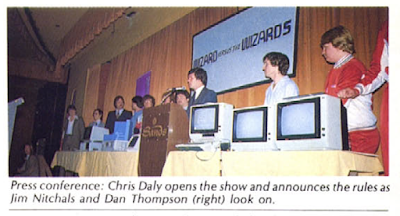 Wizard vs. Wizards was the brainchild of Tom Tatum. According to Levy, Tatum was a former “lawyer, lobbyist, and Carter campaign aide, [who was] now a leading purveyor of video “docusports” programming.” His earlier efforts in this new arena (according to Levy), included the 1981 Maui Windsurfing Grand Prix and the Telluride Aerobatics Invitational. Unfortunately, a brief web search turned up little information on either event. Levy also indicates that Tatum may have been involved in BMX competitions, which makes me wonder if he is the same Tom Tatum who wrote and produced the 1987 BMX film Winners Take All. In any event, back in 1982 Tatum got the idea that video games had the makings of the next great spectator sport (as we have seen in other posts, he wasn’t alone). Noting the popularity of video game tournaments, Tatum wondered how many people would want to see the real “pros” compete. By “pros,” Tatum meant the actual game programmers (that Tatum thought the game programmers were the real gaming “pros” was only the first of many problems with his concept). Tatum’s idea was to get top computer game programmers together for a televised computer game tournament. The tournament, called the “Wizard vs. Wizards” personal computer game world championships, was held on December 3, 1982 at the Comdex computer industry trade show in the Las Vegas Sands. Ever the optimist (or at least promoter), Tatum referred to the event as “the event where Hollywood meets the computer age” and “the ultra-contest of the eighties.” He referred to the programmers as the “new stars” and opined that “the sizzle in this show is the double-whammy” of the programmers competing against one another on their own games. 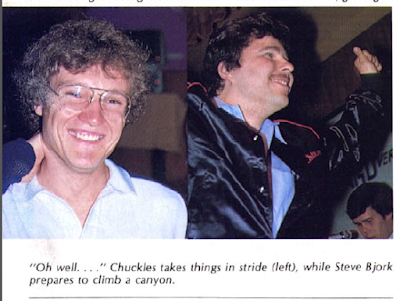 Unfortunately, the tournament does not appear to have gone well. It was originally supposed to be sponsored by Atari, but the company pulled its sponsorship just two days before the event, forcing the organizers to buy twelve Atari 800 computers from a local store on their own dime. Fortunately, Apple stepped in and agreed to take over as sponsor, providing a dozen Apple II’s The night before the event started, the team from Datamost had to break the copy protection on their game so that they could provide the requisite copies (“Nobody told me I was going to need 11 disks” wailed VP Sandy Wivott). Jim Nitchals wanted to enter his latest game, but it was rejected as unfinished, forcing him to enter a different game instead. The tournament was hosted by Catherine Mary Stewart. Yes, the same Catherine Mary Stewart that would go on to co-star in The Last Starfighter (at the time, she was mostly known for her role on Days of Our Lives). Stewart started off the tournament proper by flubbing her opening line and required fifteen takes and some hastily-prepared cue cards to get it right. After that, the tournament got underway. 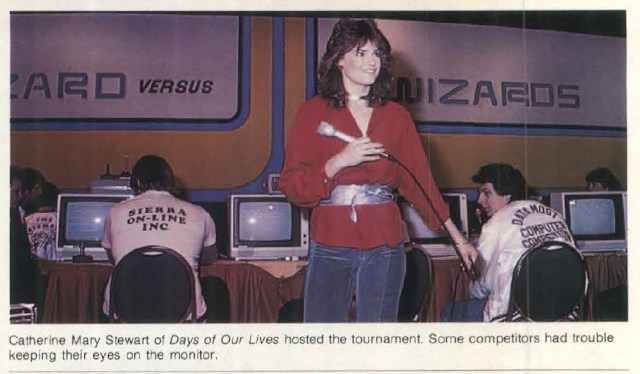 The twelve programmers (with their best known games) who entered the tournament were (note that I include games created after the tournament):

Broderbund was too busy working on the Atari ports of Choplifter and Serpentine to send any representatives.  The twelve programmers would square off on twelve different games, one from each programmer, with the first six played on Atari computers and the last six on Apples. The twelves games were the first games listed after each programmer above (Ken Williams’ game was Threshold). After playing each game for five minutes, points were awarded based on their ranking in each game. The top four then moved on to three semifinal games on an Apple with the top two switching back to Atari games (chosen at random by a DEC Rainbow computer) for the finals.


Sirius – who had sent a team of five programmers and executives, clad in personalized red sweat suits - dominated the preliminaries, with Dan Thompson and Mark Turmell holding down first and second place most of the way. In a (very) minor controversy, the Atari joysticks were replace with Wico Command Controllers partway through the prelims. 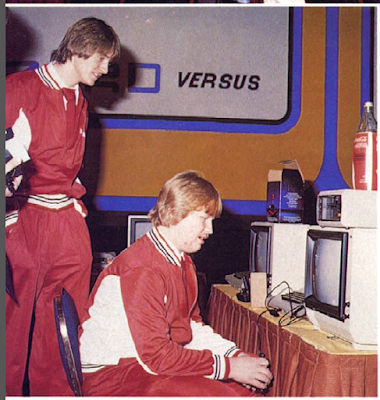 Thompson and Turmell were joined by Russ Wetmore and Jim Nitchals for the semi-finals. Once again, Sirius appeared dominant at first with Thompson and Turmell getting out to an early lead. Nitchals, however, finished second in all three games and edged out Turmell for the second spot in the finals. The finals pitted Nitchals against Thompson. In an effort to maintain the suspense for the planned April airing of the program, the organizers tried to obscure the scores with duct tape but it didn’t work. The actual finals were a bit of an anti-climax. Nitchals knew he was cooked when the computer picked three games at which he had fared poorly in earlier rounds (Clowns & Balloons, Canyon Climber, Wizard of Wor) and Thompson’s victory was cinched when Nitchals lost his game before time expired in the second round while Thompson played for the full five minutes. In the end, Thompson prevailed. For his efforts, Thompson received a DEC Rainbow and an Atari 800 while both he and Nitchals received an Amdek monitor, three joysticks, and $500 in cash.

As I mentioned earlier, I’m not sure that the event was ever televised – though the fact that Levy quoted from interviews with Thompson makes me think it was. Unsurprisingly, it did not launch the revolution that Tatum thought it would. The problem, which you think would have been obvious, was that watching computer programmers playing computer games just wasn’t all that exciting. Shocking I know, but the real wonder to me is that anyone ever thought it would have been. I can see (sort of) how someone would  have thought coin-op arcade games would make for interesting viewing (though even Starcade had to do more than just have people playing games) but computer games in 1982? I played plenty of computer games in the 1980s, but even I have to admit that they didn’t make for scintillating TV. Even loopier, to me, was the idea of having programmers playing the games. To the extent that Starcade worked, I think it did so because they mostly had kids playing the games. If they’d had designers and programmers playing, I don’t think it would have gotten past the pilot (though Eugene Jarvis would probably have been entertaining). If you’re going to have programmers playing, at least make it a pro-am in which they’re teamed with gamers. Personally, of course, I would have loved Wizard vs. Wizards but I’m not exactly representative of the general public. In any event, however, if this event was televised, I would sorely LOVE to see the video so if anyone knows where I can find it, please let us know.