Following up on my last post, video games and pinball machines have long been kissing cousins and over the years a number of not-very-successful attempts have been made to combine the two.


The most common way to combine the two was to create a video version of pinball, an idea that was tried from the earliest years of coin-op video games.
Clean Sweep (Ramtek, 1973)


OK, this wasn't exactly a video pinball game but it was fairly close. It was a ball-and-paddle variant in which the player tried to knock down a field of dots with the ball (since I haven't actually played it, I don't know if your ball bounced off the dots or not, though from the name it kind of sounds like they didn't). Designed by Howell Ivy (who later went to Exidy), it was a predecessor of sorts to Atari's Breakout


TV Pinball (Exidy, 1975)
It wasn't Exidy's first game, as some sources have it. That honor goes to Thumper Bumper (which, despite the name, was a straight Pong clone, though it used a color overlay). TV Pinball appears to be a souped-up version of Clean Sweep and unlike the Ramtek game, this one DID promote itself as a video version of pinball, referring to the dots as "bumpers". It also had pockets at the side of the screen and a moving target at the top. Ivy came to Exidy in 1975, probably too late to design TV Pinball. I suspect that the game was designed by John Meltzer, who also came from Ramtek (assuming it wasn't designed by Chicago Coin - see below).
Exidy also released the cocktail-table game Table Pinball, presumably a cocktail version of TV Pinball. 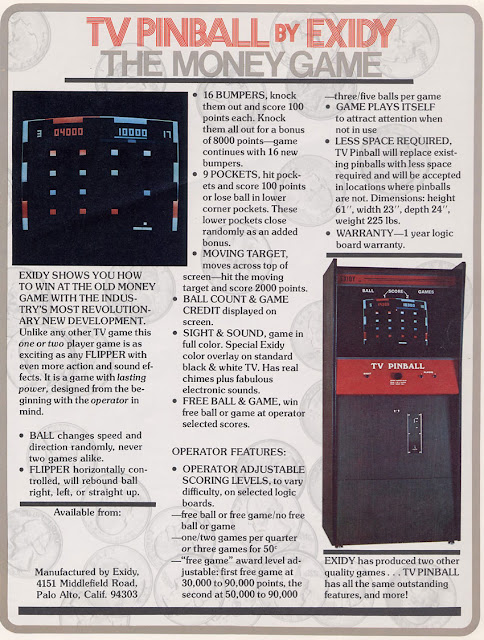 This game looks virtually identical to TV Pinball except for minor variations in the cabinet and possibly different color overlays. Some sources list the game as coming out in 1973. If it is the same game, it seems a bit odd that Chicago Coin's version came out first as it seems more likely to me that they would have licensed it from Exidy rather than vice versa. For instance, they did license Exidy's Destruction Derby, which they released as Demolition Derby.


Another game very similar to the above two. The flyer billed it as "A video game with all the excitement of pinball" (somehow, I doubt it).


OK, what's the deal with this game. This one is identical to TV Pin Game (even the screenshot on the flyer is exactly the same), except that it came in a cocktail cabinet. Some sources indicate that this game wasn't actually released until 1977 (I think I actually found a release notice in Vending Times or Replay but I'd have to check).  Why they would be releasing a copy of a 2-3 year old game beats me. By the time they released it, Chicago Coin was on the verge of bankruptcy if not actually bankrupt (their assets were purchased by the newly formed Stern Electornics).

Now HERE was a decent attempt at a video version of pinball. Designed by Ed Logg, Dave Stubben, and Dan Pliskin, it used mirrored-in graphics to provide images of an actual pinball playfield (which was designed over a foam core painted with fluorescent paint).  It had flippers, drop targets, rollovers, and thumper bumpers. It even let you nudge the game by pushing on the control panel. Atari made 1,505 of them and the Replay operator's poll ranked it as the 10th best-earning video game of 1979. . 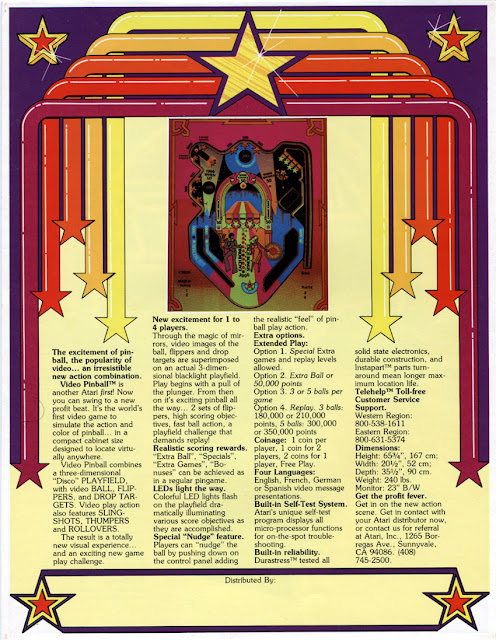 Pin Dual (Atari, 1980/Unreleased)
A two-player, head-to-head version of Video Pinball. It was scheduled for field testing but I don't know how far along in development it got.


Video Pinball actually had a sequel of sorts in the unreleased Solar War created by Mike Albaugh in an effort to find a use for the remaining unsold Video Pinball PC boards and see if there was still a market for similar games. Solar War’s original name had been Super Man and the game was to be a video version of the pinball game of the same name released in March 1979. When DC demanded additional royalty payments, however, Atari had to come up with another name. Because the game featured a “spell out”, the new name had to match the same 5 letter-3 letter pattern of the original, hence Solar War (another suggestion was Orion XIV). The game also featured a unique control arrangement – the entire control panel could be moved up and down to tilt the playfield. By the time the game was ready, Atari’s production lines were running full-tilt producing Asteroids games and only five units were built (though around 300 “conversion kit” versions were reportedly sold to a Greek operator).


A mutant creation if there ever was one,. Mounting a video game monitor in a pinball cabinet doesn't seem right.

Chicago Coin made just about every type of coin-op game under the sun but they were rarely the top producer in any genre. During the 60s they ranked well behind Gottlieb, Williams, and Bally in pinball (though they might have been a distant fourth). Looking at this thing from a distance, you wouldn't know that it wasn't a pinball machine. It had an honest -to-gosh pinball cabinet complete with backglass, flipper buttons,  and plunger. When you got closer, however, you knew there was something amiss when you saw the playfield.
I hate to admit it, but this thing actually looks pretty darned interesting to me. The ball started off moving left and right across the playfield. Pulling the plunger caused it to shoot downwards into play (OK, that part doesn't sound so interesting). The flipper buttons consisted of a sliding mechanism with a hole in it , that separated a light and a photocell. The further you pressed the buttons, the more the flippers moved. 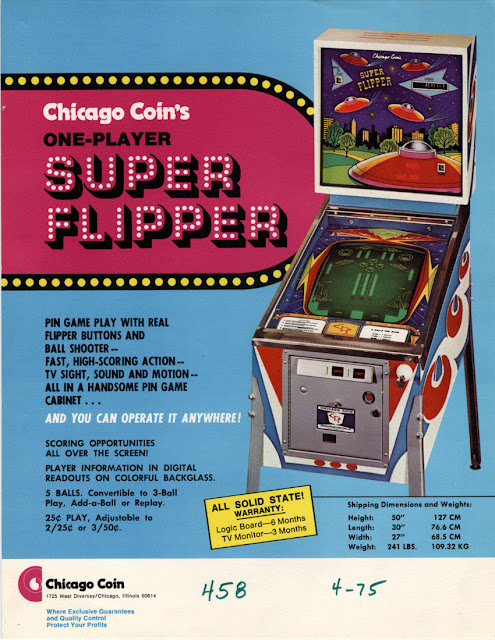 This was the same basic idea as Super Flipper. Meadows took it to the 1975 MOA show where it flopped and they never released it. Designer David Main ha this to say about it:


[David Main] When we went to the MOA show, the game was a total dud. We thought it was cool because we were in love with the technology but it was a dud because the people who like pinball play it because of the mechanical aesthetics of it. They like the sound of the ball, and you can’t just pretend to have a ball – it has to be a real ball.


So we went from having a video game version to a mechanical version. In fact I had a patent for a way of sensing the position of the ball on the playfield by having the ball roll over coils. I would send out energy pulses to these different coils that were located in different places on the playfield. When a ball rolled over it, depending on how close it was, the ball would absorb some of the energy that was sent out through this coil. There was one capacitor that switched from coil to coil so that when you hit it with a pulse it would cause a circuit to ring and by counting how many rings there were before the level fell below a threshold I could determine how much energy had been absorbed.

I actually saw a photo of this game (I think in Vending Times) but don't have a copy handy (I'll have to see if I can find one).


Baby Pac-Man (1982, Bally/Midway)
Designed by Dave Nutting Associates and Bally (much to Namco's chagrin, since they hadn't authorized the game), this is probably the most well-known  video/pinball combination.  The pinball portion was designed by Claude Fernandez with art by Margaret Hudson. Bally sold 7,000 units and the game reached #5 on Replay's Player's Choice charts. 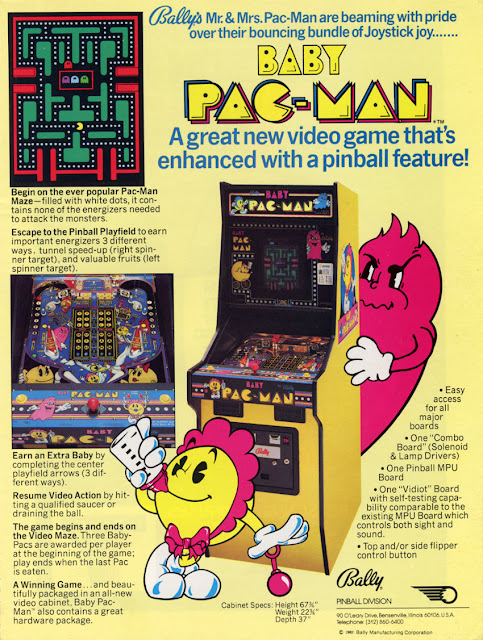 Granny and the Gators (1983, Ballly/Midway)
Bally's second attempt at the genre. The pinball portion was designed by Jim Patla with art by Margaret Hudson and Pat McMahon. This game was not without its charms. Some claim that the video game portion led to Toobin' but I don't know if that's true or not.


Caveman (1982, Gottlieb)
With only 1,800 produced this one wasn't much of a success. The pinball portion was designed by John Buras with art by Terry Doerzaph, David Moore, and Rich Tracy. The video portion was a simple maze game in which a caveman is pursued by dinosaurs. It was designed by Joel Krieger with hardware by Jim Weisz and art by Jeff Lee (it was actually Lee's first work at Gottlieb and he designed the graphics on an Apple II computer).

This one was shown at the Forainexpo show at Le Bourget in Paris in December, 1981. It was made by the Italian company E.G.S. and Telemach 3 (a company about which I know next to nothing, other than that they had a booth at the show). It made its debut earlier at the Emada show in Rome. I have seen almost nothing on this game anywhere. The Internet Pinball Database lists it as New York and gives only the name, company, and year of release. The other databases (pinside, arcade museum, arcade history) seem to take their info from IPD. I'm not even sure it IS a video/pin combo.
All of the information comes from the January, 1982 issue of Replay, from which the following photo was taken (please excuse the very poor quality - I scanned it in black and white several years ago because, at the time, I was only interested in the text. I threw the actual issue away since I didn't have the space for it). 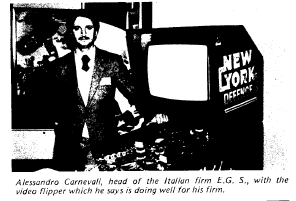 
Designed by Harry Williams. See the previous post for details.
Posted by Keith Smith at 11:14 PM