The Ultimate (So Far) History of Cinematronics/Vectorbeam - Pt. 5

War of the Worlds 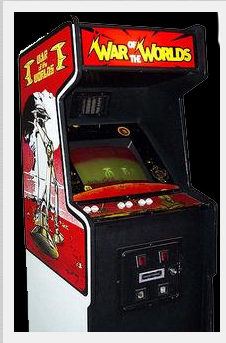 In early 1982, Cinematronics released War of the Worlds, a conversion kit for Star Castle. The game had originally been designed by programmer Rob Patton in 1979.
[Rob Patton] One night we all went out to see the new movie Alien. The next day we were thinking about game themes and I threw out the idea that we could draw decent Martians on legs and Tim (Skelly)  volunteered to draw some sketches.


[Tim Skelly] My idea…was to do something like Space Invaders." To take advantage of the vector display, I wanted to have the enemies attack towards the player and scale up, rather than drop on top of you -- the classic top-down/PO switcheroo. I think the War of the Worlds theme came from wanting the player to shoot the legs out from under the attackers. This suggested the walking tripods of H. G. Wells. I had a bear of a time drawing a three-legged walk cycle that still worked at each stage. Just doing a three-legged walk cycle was bad enough! I also distinctly remember suggesting to Jim Pierce that we might want to do a copyright search on the name. Jim, of course, could not care less[1].


The game featured a battle against a series of enemies based on the three-legged, tower-like ships in the film of the same name. While Tim Skelly created the game art, a new artist handled the cabinet art. Frank Brunner was unable to provide art for the game (Skelly recalls that he didn't like working on "tech stuff"). Instead, Rick Bryant, another comic book artist was hired to create cabinet art (he later did the cabinet art for Tailgunner, Star Castle, and Armor Attack). Rob Patton left before the game was completed and went to Hughes Aircraft, where he worked on projects involving spy satellites. War of the Worlds fared poorly during testing and was shelved indefinitely.


In late 1981, Cinematronics was riding high but there were problems. Black and white games were becoming increasingly passé and Cinematronics monochrome vector system was looking increasingly dated. Creating an entirely new hardware system would be expensive and time consuming so instead, the company decided to update its vector system to handle color. They had considered releasing Solar Quest in color but dropped the idea when they were unable to obtain enough color monitors. They did, however, produce a color version of War of the Worlds. As it had previously, the game tested poorly at the 1982 AMOA show and was dropped. Reportedly, only about a dozen units were ever produced (possibly including just two in color). One problem may have been that the system did not have the horsepower to generate enough enemies to make the game interesting or challenging.In 1983, the game was licensed to Progressive Game Distributors, aka PGD, a company founded by former Cinematronics exec Dave Stroud. 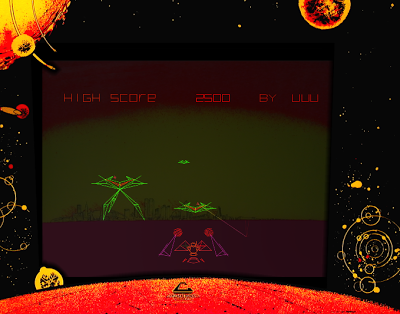 By this time, Tim Skelly had left Cinematronics to work on Gremlin's (and the industry's) first color vector game. Gremlin had lured him away by promising him royalties on the games he created. Wanting to remain loyal to Cinematronics, Skelly offered to stay with them for a smaller royalty figure than that offered by Gremlin, but they refused.


In any event, Cinematronics eventually entered the color vector arena. The first Cinematronics color vector game that is known for certain to have released was 1981’s Boxing Bugs, which had actually started out as a Scott Boden game named Outpost.

[Scott Boden] Outpost was a game that had a center warrior with a cannon and gun defending a 'outpost'. I temporarily left Cinematronics (I think I did that 3 times, young and overconfident), and when I came back Jack Ritter took over the project. His 'cute' game concept tuned it into Boxing Bugs.


Jack Ritter had come to Cinematronics after stints at NCR and Burroughs. He had entered the computer field after some early experiences with the counter-culture of the late 1960s and early 70s.

[Jack Ritter] I Went to San Francisco, and lived in North Beach. I lived off of welfare. (It was the late 60's). I survived off of the payments: $52 per week! I lived in a house with various female student strippers, who for some reason liked to walk around the house naked. I didn't protest. One of them was Lorraine, of "Sweet Lorraine" fame (a song by Country Joe and the Fish). Anyway, after nine months of, as they say, Sex, Drugs, & Rock N' Roll (an accurate characterization, actually), I got bored.


Ritter’s interest in video games had come when he got his first look at Tim Skelly’s Star Castle and became an instant fan. When he came to Cinematronics, his first task was to create a new game based on Boden’s Outpost. The game was called Boxing Bugs. 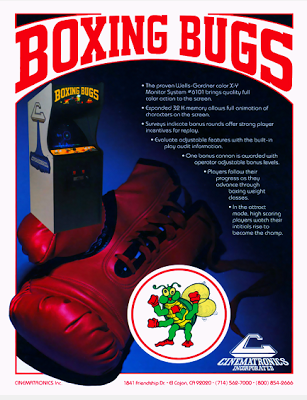 In Boxing Bugs, the player was represented by an arm-like cannon with a boxing glove at one end that sat in the center of the screen surrounded by an octagonal wall. A paddle control rotated the cannon. Pushing one button caused the boxing glove to spring outward and pushing another allowed the player to shoot out of the opposite end. A third button served as a “panic button” which the player could use a limited number of times to pushed away everything touching one of the walls. Outside the walls were a number of bombs. Enemy bugs would appear from the edges of the screen and try to position the bombs next to walls to open a hole that they could use to blow up the player himself. The most notable feature of Boxing Bugs was that it used a real color vector system – though it ended up being the only game produced on the system.

[Jack Ritter] Boxing Bugs was a real color vector game - no overlays. It was the first and only color vector game released for that system. They stopped doing games for that platform after Boxing Bugs. [It’s] too bad; they could have milked the old gal for at least 2 more games. Instead, they put their hopes into a next-generation color vector system, designed in-house. It used a display list architecture, with no double buffering capability, so you got screen glitches if you tried to push its performance. It performed flakily in the field with its 1st game, and thus, the system got a reputation as a lemon.

In mid-1982 Boxing Bugs was licensed to Dynamo Corp of Grand Prairie, TX. Even earlier (in 1980), Cinematronics had licensed its vector system to Rock-Ola who produced a handful of vector games (in addition to cocktail versions of Armor Attack and Star Castle for distribution in Europe. 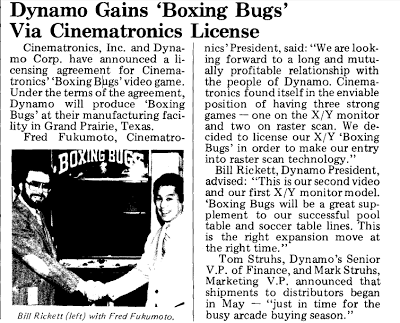 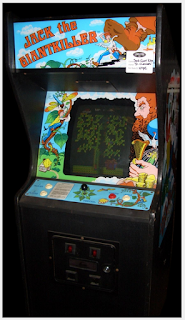 1982 also saw Cinematronics release its first licensed games. First up was Jack the Giant Killer, licensed from Hara Industries. The game put the player in the role of Jack in a multi-stage platform game that involved climbing a beanstalk then navigating clouds and ladders to reach the giant and steal his treasure (and, ultimately, the princess). Cinematronics tried a number of things, including 3 x 5 tip cards and a contest with a one-ounce golden egg as a prize, to promote the game. A second version called Treasure Hunt was produced that prevented the player from falling of the vine, but it didn't help (Video Games magazine reported that it made the game worse). The game was a financial disaster for reasons that aren't entirely clear. Some called it "Jack the Company Killer". The driving force behind the Hara deal was Fred Fukumoto, who'd replaced Jim Pierce as president in December, 1981.

By that time, Pierce and Tom Stroud, Sr. began spending less and less time at Cinematronics, leaving others to handle the day-to-day operations. Fukumoto purchased 5,000 boards for Jack the Giant Killer from Hara. Because they came with no documentation aside from schematics, Cinematronics had to reverse engineer the boards to create a programmer’s manual. The results were hardly worth the effort as Jack the Giant Killer was a resounding flop in the arcades. Rumors swirled that someone at the company had personally profited from the licensing deal, which left Cinematronics with a pile of unused boards and a financial mess on their hands. The company began casting about for ways to use the remaining inventory of boards. Naughty Boy, licensed from Jaleco, was better but no runaway success.  Many saw this as the beginning of the end for Cinematronics. Video Games magazine's  report on the 1982 Amusement Operators Expo in Chicago was brutal: "…the ghost town that is the Cinematronics booth makes absolute sense. Boxing Bugs, War of the Worlds and Jack the Giant Killer, the company's first Japanese license (from who?), look like the kiss-of-death for this once-respected, but slowly fading games firm." 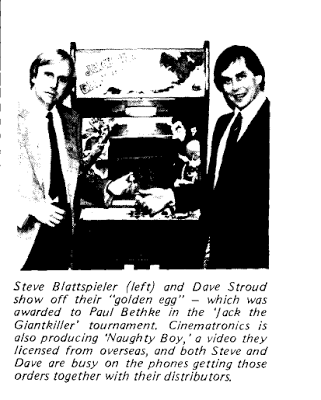 The company's final 1982 was Zzyzzyxx, developed by  Advanced Microcomputer Systems, a company founded by an innovative programmer named Rick Dyer that had developed a number of handheld games.  Dyer pitched the concept of Zzyzzyxx to Cinematronics, who decided to produce it. The game had originally been titled Brix. The name was reportedly changed when someone at Cinematronics heard that kids spent more money on games starting with X or Z and the owner's wife suggested they call it Zzyzzyxx[2]. In the game, the player maneuvered through several rows of brick walls moving in alternate directions. Each wall had a number of gaps in it. Some of the gaps contained gifts while others harbored enemies. The goal was to move from one side of the screen to another avoiding enemies and collecting gifts on the way to the waiting Lola. The player (Zzyzzyxx) could also make breaks or don a helmet that allowed him to break them. Zzyzzyxx was a dud, but Dyer and Advanced Microcomputer systems had another game up their sleeves that would prove anything but. 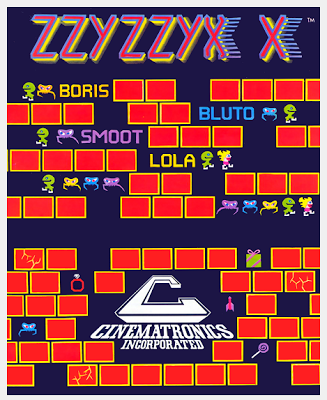 By this time, the financial situation at Cinematronics was grim. On September 17th, 1982, Cinematronics had been granted chapter 11 bankruptcy protection[3] (it would go on to be the longest Chapter 11 in California history).  Jim Pierce supposedly had to sell his Rolls Royce and hock his wedding ring.  Cinematronics was a long way from done, however. Unbeknownst to Pierce, or anyone else, their savior had already arrived in the person of Rick Dyer. Zzyzzyxx had been a dud, but Dyer and Advanced Microcomputer systems had another game up their sleeves that would prove anything but.  In the meantime, the company continued turning out games and hiring new employees in a desperate effort to recapture to glory days. 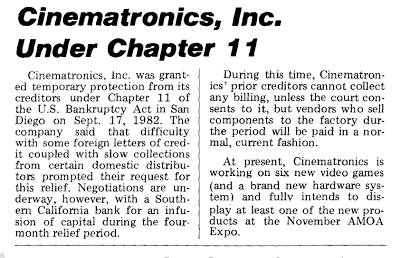 [1] December 20, 2011 E-mail from Tim Skelly to Ionpool.net (http://www.ionpool.net/arcade/cine/warworlds_history.txt)
[2] Though the story, which sounds apocryphal, may be no more than a rumor.
[3] The reasons given were "difficulty with some foreign letters of credit coupled with slow collections from certain domestic distributors..." (Replay, Oct 1982, p.26)