The Ultimate (So Far) History of Cinematronics/Vectorbeam - Pt. 7

I expect more information about Cosmic Chasm to be forthcoming. If it does, I will update this post.
The next post in this series will cover Dragon's Lair and Space Ace.


[Bob Skinner] I was able to convince Tommy Stroud Jr. to let me make up a game and learn how to use the game system. My idea was called Intrepid and was basically an endless strafing run... All I had to do was make just enough progress to keep ahead of the naysayers. It was a futuristic fighter jet controlled by a four-way joystick and a gun system controlled by a trackball that you clicked down with your palm to fire…With vector graphics you could have nearly unlimited rotations about the x-y axis. You could also use a trick to rotate in the Z-X plane and appear to “bank” an airplane. With “Hand Command” the exclusive targeting system, even if you dodged a heat-seeker, and it swung around and started chasing you, you could pin-point aim behind you and shoot it off your tail….I am not sure if there was a single brand-new idea in the game. The Hand Command was simply a missile command mechanic while flying. The weaving an aircraft left and right had been used in Astro Blaster and several other space games. I convinced myself this was unique and special for color x-y. I was moving over land, up a winding path, facing fixed targets, tanks, and missile launchers, on the way to a base that in reality I would never reach…


Before Intrepid was finished Atari released Xevious (licensed from Namco) which had similar gameplay but a much better implementation. Stroud quickly lost interest in the game and the project was cancelled. 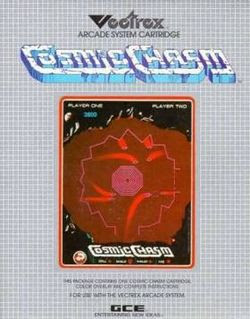 One day, while Skinner was working on Intrepid, Jim Pierce arrived at work with another new toy. This one, however, was a bit more sophisticated than Mattel's handheld football game. It was a vector-based home game system called the Vectrex. Designed by John Ross, Mike Purvis, Tom Sloper at Steve Marking of Western Technologies/Smith Engineering the Vectrex was an all-in-one system with a tiny 9 x 11" CRT and a small library of games that would be released by GCE in December, 1982. Pierce inked a deal with GCE giving them rights to produced licensed versions of Cinematronics' vector classics like Rip Off, Armor Attack, and Star Castle. In return (besides the licensing money) Cinematronics got the rights to produce coin-op versions of any Vectrex game. They picked Cosmic Chasm. The original programmer was Mike Gomez - a former technician working on his first video game.


[Bob Skinner] Mike had been a tester, and knew how to use a fluke meter and an oscilloscope, but couldn’t have been much of a programmer or give me any reason to worry about. But it was clear that Mike was pretty quickly shifting some images on his screen, and they started to be interactive, and damn if he hadn’t gotten to that point sooner than I did a few months back. It might have had something to do with my endless summer ethic and his single-mindedness, but Mike was getting traction, and help from the other lifers. Within a week of the Xevious “giant thunder-steal”, a meeting had taken place to seal my game’s fate. Jim Pierce came down to announce that Mike and I were joining forces to finish Cosmic Chasm. We had three months to complete the game for the arcade. There was likely some overtone of the dire consequences to the company if we didn’t succeed, but for me the main consequence was that I had just had an invention torn from my clutch, had been joined at the hip with someone I didn’t respect, and for a product I didn’t initially believe in.  Mike said “it’s going to be great”


Before the game was finished, Gomez quit to work for a new company called Simutrek on the laserdisc game Cube Quest, leaving Skinner to finish programming the game.

In the game, the player attempted to pilot a ship to the center of a reactor, then destroy it and escape. Dave Scott redesigned the graphics from the Vectrex original.

[Bob Skinner] Dave designed different colored squiggles of bowties, spiky squares and what not for the enemies. The ugly drill at the front of the ship that had one purpose, to deactivate the doors? Gone. The subterranean aspect? Gone. The varied map? Gone. In their place was a tinker-toy space station with pods connected by tubes. The map and radar would remain at the top of the screen, then the scoreboard, then the current room. The jagged rooms cut from rock were replaced by an outer hexagon as this was now the minimalist walls of a station. The doors on the wall would correspond to the exits that were shown on the map. So it was still Cosmic, but it was no longer a Chasm in the subterranean sense. If in space no one can hear you scream, perhaps they won’t nitpick on terminology either.
Another change came courtesy of Jim Pierce.

[Bob Skinner] One thing about owning the company – you get to have your ideas implemented. If they are good ideas, most everyone wins, but implemented they will be. Jim had outlined design elements for the arcade version among these few tenets was that the enemy ships would be narrower than the width of the gun ports. I put that aside as not making sense, why would you design a weapon that when aimed at an enemy misses him on both sides... I implemented it my way. When Jim saw it, he reminded me: “The enemy ships must be smaller than the width of the guns”. This time I verbalized my argument. Jim repeated the sentence, adding some emphasis on "must" and "smaller". On this third invocation, I bit down on my tongue. I changed the code. I came to appreciate the difference. It was what made the shield mechanic so fun.


. Cosmic Chasm was field-tested at the Yellow Brick Road arcade in the Universal Town Center,  where it made almost $400 in a weekend. Skinner was told that Cinematronics had 3,000 orders for the game. In the end, however, most of the orders were cancelled and only about 50-400 coin-op units were shipped. A flop in the arcade, Cosmic Chasm would be the only game released for the new system as well as the last vector game that Cinematronics would produce. 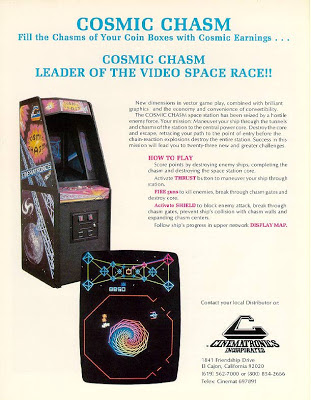 Flop or not, Bob Skinner feels that it was one of the company's best efforts.

[Bob Skinner] I don’t believe to this day that any game had every given the player that much rotational control and firepower. You could fire a slow bullet on this horizontal line, or one on this 45 degree angle in other games, and then hope you aimed perfectly or that your bullet would reload. But here, the more you shot at close range, the faster you could shoot. Twisting the shaft encoder, and rattling the fire with the index and middle finger you could shoot up to 480 RPM, and at very fine angles. This more than made up for the fact that you had to twist…While there was no limit to ammo, there was some energy expended by the shields, which grew dim by some 256 levels of grey to depict the depletion. I was selling adrenaline. People where fully engaged firing, killing dozens of enemies, trying to concentrate fire into their entry point into the room, timing the waves, blasting the gate, and leaving the room, noting the size of the central core.


With the failure of Cosmic Chasm and the cancelling of Hovercraft and Intrepid Cinematronics, which had built its reputation on vector graphics games, exited the vector field entirely, sold its system, and turned to releasing raster games. By 1983, the name Cinematronics was a fading memory of days gone by that most arcaders thought had disappeared forever.
They couldn't have been more wrong. Before the year's end Rick Dyer and Advanced Microcomputer Systems would provide the company with its biggest hit ever and almost single-handedly reverse the coin-op video game industry's downward spiral.
Posted by Keith Smith at 10:01 PM