The Ultimate (So Far) History of Exidy - Part 5 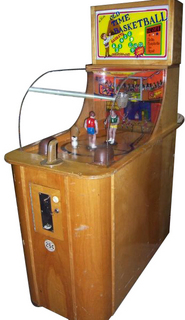 Not all of Exidy’s efforts during these years were video games, however. The company also branched out into other areas. A number of games were the result of Pete Kauffman’s love of games from the penny arcade era. 1975’s Old Time Basketball was one attempt to re-capture that era. The game was a throwback to Chicago Coin’s mechanical Basketball Champ (1947) and Pro Basketball (1961), but it fared poorly against the video and pinball games popular at the time with around 1,000 units produced. Exidy would later release Whirly Bucket and Tidal Wave (a pair of roll-up games similar to Skee-Ball), a half-size craps table, and a line of player pianos.
The Sorcerer 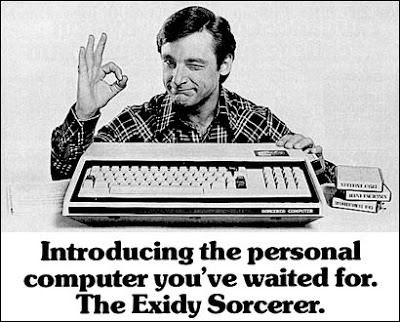 Perhaps the company’s most ambitious effort came in April of 1978 at the PERCOMP convention in Long Beach, California with the debut of the Exidy Sorcerer personal computer. With the release of the Sorcerer[1], Exidy became (probably) the second major coin-op company, after Gremlin, to make a personal computer (Atari would join them in 1979 with the 400 and 800). At the time, the major players in the low-cost home computer market were the Apple II, the TRS-80, and the Commodore PET.
In November, 1977 Exidy had formed a Data Products division in Sunnyvale and appointed Paul Terrell as marketing manager. By 1977 Terrell was already a seasoned veteran in the incipient computer industry. In December of 1975 he had founded The Byte Shop (named for the recently introduced Byte magazine) in Menlo Park, California - one of the earliest consumer computer stores. The Byte Shop started as one of the first retailers for the MITS Altair 8800, but lost its dealership status for violating the company's exclusivity agreement. Terrell didn't mind. He was selling all the machines he could get from companies like IMSAI and Processor Technology. The store even sold its own Byte Shop-branded computer called the Byt-8. Since most of these early computers required assembly, Terrell offered "kit insurance"  - for an extra $50, Terrell guaranteed he would help solve any issues that arose with the machines. Within a month of opening his store, Terrell was approached by others wanting to open Byte Shops of their own and the chain began to expand. In July 1976 Business Week profiled that chain and soon inquiries began pouring in by the thousands from potential investors. Terrell was also a member of the Homebrew Computer Club where he met Steve Jobs and Steve Wozniak who told him about their new company, Apple Computer. Terrell gave Jobs his business card and told him to keep in touch. The next day, a barefoot Jobs walked into The Byte Shop and told Terrell he was keeping in touch and tried to sell him some Apple I circuit boards. Terrell wasn't interested in boards. Instead, he wanted fully-assembled computers and was willing to pay $500 a piece for them on delivery. Terrell gave the pair a purchase order for 50 Apple I's on net 30 days credit. The Byte Shop had just become the world's first Apple retailer. Now Wozniak and Jobs had just 30 days to deliver 50 machines. With Terrell's guarantee in hand, they were able to obtain the parts they needed from suppliers who otherwise might not have given them the time of day. Apple delivered the 50 machines on the 29th day. Terrell (who felt that computers should work out of the box) added keyboards and monitors before selling them.  According to some accounts Terrell's idea had one other far-reaching effect on Apple. Jobs and Wozniak (the account goes) had previously seen their computers as being primarily of interest to hobbyists who would want to customize them. When Terrell began selling fully-functioning computers, the two finally saw the light. The Apple II would have a built in keyboard and come with a case and a monitor. By the time Terrell sold the Byte Shop in November of 1977, he had 74 stores in 15 states and Japan and valued his operation at $4 million.


Shortly thereafter, Terrell went to work for Exidy. It was Terrell, in fact, who had talked Pete Kauffman and Howell Ivy into launching the Sorcerer in the first place Terrell had been impressed with the colorful graphics he saw in Exidy's arcade games and felt that they would be the ideal company to design a personal computer with improved graphics capabilities. He also  gave the computer its name. Since computers were like magic to many people, Terrell suggested calling the computer the Sorcerer.
Hoping to compete in a tough marketplace, Exidy decided to combine the graphics capabilities of the Commodore PET with the flexibility of the TRS-80. They also included a few features of their own – the most highly touted of which was the Rom Pac, an 8-track cartridge containing the BASIC language interpreter. The Pac, which plugged into a port on the side of the computer, allowed users to load BASIC quickly instead of waiting the five or more minutes it took to load an application from a cassette tape (the standard method of data storage at the time). Exidy promised additional cartridges in the near future. The Sorcerer also contained ports for a printer, a cassette player, and a monitor (it could also be connected to a TV set). The unit shipped with a 4 MHz Z-80 CPU and 8k of RAM (expandable to 32K) the target price was $895. Upon its launch in April of 1978 orders poured in and Exidy found itself with a 4,000 unit backlog. Pete Kaufmann had high hopes for the Sorcerer - very high. In late 1978 he announced that he expected the data products division to account for 40% of Exidy's business in 1979. While initial reviews were quite favorable, only time would tell if the Sorcerer would make it in the dog-eat-dog world of home computers.

[1] In the August 1997 Computer Shopper, John Dvorak claimed that the Sorcerer was designed by Tulip Computers of the Netherlands “as part of a project to bring computer literacy to the country”.

A Nichibutsu coin-op Go game from the 1982 ATE show in London.

Wall-mounted video games from the 1982 IMA show in Germany.

I mentioned this one in an earlier post. Here's a screenshot from the third game in Breshnahan Technologies' game system - Airport