1976
In 1976 the industry finally left the ball-and-paddle game behind. While a good number of such games were produced (around 1/3 of new titles) they were a distinct minority. Driving games and shooting games proved especially popular. Of the 11 video games named in Replay's year-end operator survey, 5 were driving games and 4 were shooting games (the exceptions were Atari's Breakout and Ramtek's Trivia).At the AMOA in November, a number of innovative new games were introduced including Death Race, Blockade, and Night Driver. Replay gave Blockade a "best of show" award. Midway sold 7,000 units of Wheels, 8,600 of Gun Fight and 10,000 Sea Wolfs. Atari sold 11-15,000 Breakouts. On the other hand, there were still plenty of old Pong clones on location and many operators remained leery of video games after having been once bitten. An article in the January, 1977 issue of Play Meter by operator Gene Beley sums up this opinion nicely.


[Gene Beley] I can still remember Bob PortaIe…showing me the first Pong game by Atari. When he told me the price of over $1300, I looked inside at the Hitachi TV set, and joked, 'For that price, I at least ought to get a Sony.' But when we discovered that the cash boxes overflowed in the Pongs, we overlooked the Hitachi and the other adolescent pimples …(such as giving free games when it was kicked or received a charge of static electricity). The industry rejoiced. Nolan Bushnell became the Messiah. And, better yet, before the payments were even completed on the Pongs for all of the operators' locations, along roared Gran Trak 10 and its twin, Gran Trak 20. No operator could afford to be without such equipment. As a result, an abnormally large amount of equipment was purchased on credit, frequently with no down payments, during this boom period…Manufacturers were throwing new video games into distributors showrooms faster than Billy Jean King could hit tennis balls over the net. Many of those games that are now skeletons in the closets of manufacturers looked great enough to try and buy… Fortunately, because the video games were still a public novelty, times were good, the payments got paid, and, if a particular video game began turning sour, we hustled it back to the distributor, and got a fair trade-in price on the latest TV game…Operators began to realize they really weren't making money on these games. The location was getting the feast. And everyone else in the distribution chain. But the operator began to ponder the predicament by the end of 1975…several veteran operators on the West Coast faded quietly out of the business, along with the video machines that were creating a graveyard. In 1976 distributors began being highly selective in which video games that they would even accept for trade-ins. By the end of 1976, it was almost impossible to sell any video game but a Gran Trak 10, 20, or Indy 800 to a Los Angeles distributor, though the same distributor may have sold the same game six months before


As successful as video games were, however, pinball games may have been even more so. At least 5 games introduced during the year sold 10,000 copies or more led by Bally's Captain Fantastic with over 16,000. The legalization of pinball in New York City and Canada helped but pinball sales were up everywhere. In Replay's list of the 10 top earning coin-op games during the year, pinball games held down the #3 (Bally's Wizard from 1975) and #9 (Captain Fantastic) spots. Replay reported that 41% of games on location in 1976 were pinball games, accounting for 49% of operator income.
While microprocessor games had been introduced at the 1975 MOA show. Most pinball and video games produced during 1976 didn't use them as manufacturers were still scrambling to incorporate the new technology. While pinball and video games got most of the attention, electro-mechanical arcade games weren't dead. Atari/Namco's F-1, Sega's Plinker's Canyon (a rifle gallery), and Americoin's Junkyard (a crane game) also received best of show honors.

One sign of the growing importance of pinball and video games came in November when the MOA (Music Operators of America) changed its name to AMOA (Amusement and Music Operators of America) - though part of the reason for the change was that the rival IAAPA was trying to lure arcade operators away from the MOA. Another major trend during the year was the continued explosion in the number of arcades. In Replay's operator  survey, 92% of operators said they had a major arcade (defined as a location with 20 or more games) on their route. For the first time, Replay conducted a separate poll of arcade owners and operators and found that 24% of them had opened within the previous year. The most common locations for arcades were, in order, shopping malls, bowling alleys, strip centers, and colleges. Many in the industry thought that arcades (at least the "family fun center" variety often found in malls) might offer a solution to the industry's image problems. Replay reported that "In 1976, arcades entered 'phase two' of their revolution from center city sleaze to plushly-decorated salons populated with all-American folks from 'central casting.'

On the negative front, a few video game manufacturers closed their doors during the year, including Digital Games, Innovative Coin Corporation, and Electromotion. In December, the venerable Chicago Coin's assets were purchased by Sam and Gary Stern. Exidy's Death Race caused the industry's first national controversy. Other stories affecting the coin-op industry in general included the legalization of gambling in Atlantic City and the signing of the Copyright Revision Bill in October. Jukebox operators would have to pay a royalty of $8 per machine, which would increase to $25 in 1982, and $50 in 1984. While many hailed the bill as bringing a truce to the decades-long war between jukebox operators and song writers, many operators were unhappy. For the first time, they would be required to pay royalties on their equipment. Many felt that they were being double taxed since they had already paid royalties when they bought the records. In addition, the bill required operators to provide a list of locations where they placed their machines, which many felt was a violation of privacy. Many also felt that the MOA had not done a good job representing their interests (in later years, when the royalty per machine was raised to $63, many operators stopped carrying jukeboxes altogether). 1976 also marked the beginning of the corporate era in coin-op video games as Columbia  acquired Gottlieb and Warner bought Atari (though whether this was  a good thing or a bad one depends on your point of view).

With the introduction of the General Instruments AY-3-8500 chip the home video game industry exploded in 1976, with over 75 companies making ball-and-paddle games. Coleco introduced the Telstar and sold a million units. Fairchild introduced its cartridge-based Channel F and Mattel introduced its handheld Auto Race.

# of arcade video games sold (according to Creative Strategies, Inc.): 54,000

Play Meter called 1977 a "transition" year in coin-op. The transition they were talking about was from electro-mechanical to solid state technology. By the end of 1977 most pinball manufacturers were producing solid state pins while most video game manufacturers were switching to microprocessors. Ball-and-paddle games were finally a thing of the past with only a handful being produced (at least on the coin-op front). Some saw the coin-op video market as flat. In June Play Meter noted that while pinball and juke sales were soaring, video games "seem to be slipping". Elsewhere in the issue, Joe Robbins of Empire Distributing said that "Certainly the video games have peaked and are in a plateau." RePlay's spring survey noted that it was the third consecutive one in which video games as a group were labeled "trouble".  At the AMOA show the two most popular video games were Space Wars by Cinematronics and Circus by Exidy.

Replay had a different name for 1977. They called it the "Year of the Electronic Pinball". Solid state pinballs were an instant hit with operators, who found them easier to service. Of the top 20 coin-op games in Replay's operator survey, 8 were pins including the #1 overall game, Evel Knievel, which sold 14,000 copies for Bally. September's Eight Ball (also by Bally) did even better with 20,320 sold. Even Atari got into the pinball game. Gottlieb, on the other hand, once the leading producer, was slow to climb on the solid state bandwagon and lost its #1 position to Williams and Bally. Another significant event, at least symbolically, was the legalization of pinball in Chicago, the birthplace of the modern pinball industry.
On the home front, things started well enough with the introduction of the RCA Studio II followed by the Coleco Telstar Arcade. Mattel hit it big with the handheld Auto Race and Football. The big news, however, was the released of the Atari VCS for Christmas. Ultimately, however, Christmas 1977 turned out to be bad news as the video home game industry underwent its first crash. The market was glutted with ball-and-paddle games. As demand rose for programmable consoles, dedicated unites were dumped at bargain basement prices, causing a backlash the affected the consoles. Handheld games also siphoned off customers. RCA and Fairchild both exited the market permanently while Coleco dropped the Telstar to concentrate on portable games.
Statistics:
# of Different Video Games Released: ca 100
Top Games
Replay: 1. Sea Wolf (Midway), 2. Sprint 2 (Atari), 3. Breakout (Atari), 4. Drag Race (Atari), 5. Starship 1 (Atari), 6. Double Play (Midway), 7. Night Driver (Atari), 8. Bazooka (PSE), 9. Robot Bowl (Exidy), 10. 280 Zzzap (Midway)


[1] For comparison cigarette machines (the most popular type of vending machine and the one type usually carried by music and game operators) earned a an average of $60 per week in 1977 and $64 per week in 1978. The one type of machine not included in the above figures is the slot machine. A 1977 Forbes report examined the earnings 23 Bally slot machines in a single casino over an 18-day period and showed that they were grossing almost $1,350 a week (after paying out)

Some months back I posted about the game Meteors. Here's a photo from its debut at the 1981 AOE show.

A better picture of the cab

Did you know that there was a sixth Moppet game in the works? (from Vending Times, February, 1984) 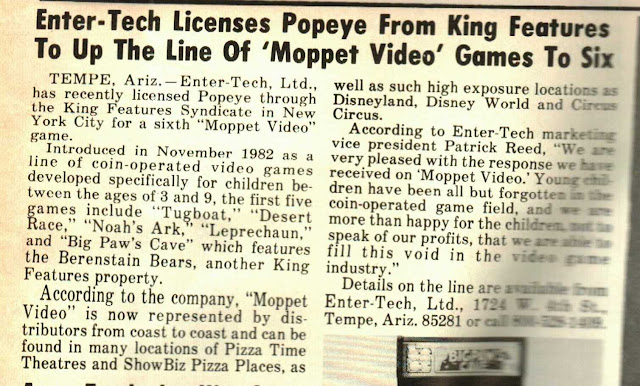 The Video Game Trailer from Elcon Industries (IIRC founder Andre Dubel tolde me they only sold one). Atari tried a similar concept.