The Ultimate (So Far) History of Exidy - Part 7


Another now-rare game was Victory, a game similar to Defender that featured excellent gameplay and some of the best sound and speech for a video game at the time but was almost unknown in the arcades. A follow up called Victor Banana was released that included only minor changes to the gameplay and artwork. Both Victory and Victor Banana were creations of programmer Vic Tolomei (hence the name) and the latter reflected his odd sense of humor.
Pepper II

Pepper II was another Larry Hutcherson maze/capture game, similar to Stern/Konami’s Amidar. Each level featured four different mazes connected by tunnels. The player controlled an agnel that enclosed areas of the screen by "zipping" around them to paint the floor a different color. Enclosing an area containing a prize (like a safety pin or flower) advanced a bonus multiplier while enclosing one containing a pitchfork transformed the player into a devil that could attack the enemy eyes. Retracing an incomplete path "unzipped" it so that you had to paint over it again. The game was originally called Zipper (because of the zipping and unzipping) but Exidy owner Pete Kaffuman changed to something much more confusing
[Larry W. Hutcherson] "It was supposed to be called Zipper but Pete got afraid of a new lawnmower that was released called Zipper and decided on a fluke to name it Pepper II while he was sitting at the table…looking at a pepper shaker… Everybody was scratching their head trying to figure out why we were calling it that."
Both Pepper II and Victor Banana were released as conversion kits (for Venture and Victory - though Pepper II was also available as a dedicated unit). With sales flat, Exidy was looking for a way to market new games and became the second major manufacturer (after Sega) to jump on the conversion kit bandwagon.
As was the case with most companies, designing games during the early '80s was challenging. Before hard drives came along, programmers had to swap disks in and out multiple times to load their games and tools into memory. Design tools didn't really exist at the time so programmers at Exidy had to write their own, including a debugger, a graphics tool, and sound tools.
Exidy largely chose to stay out of the licensing game, preferring to design its own games. The design atmosphere at Exidy seems to have been a good one. One report claims that designers could receive bonuses for hit games that exceeded their annual salary. In 1982 the company launched a game creation contest where teams of five (one from each of the company's divisions) would brainstorm ideas for new games then compete against one another for cash prizes.

While Exidy had had its share of hits, it remained a fairly small player in the video game arena. Play Meter reports that the company had just a 2% market share in 1981 (trailing behind Atari, Bally/Midway, Williams, Stern, Cinematronics, and Sega/Gremlin). In 1982 the figure dropped to 1%. While it may not have been able to compete in terms of revenue, Exidy usually turned a profit. Exidy never went public. The decision was deliberate.

[Pete Kauffman] "We don't have the problems of a Warner Brothers or Gulf &Western. We don't have to do anything we don't want to do. Those guys have such a big animal to feed. We can do our $10-15 million a year and be as profitable as anyone[1].
After 1982, Exidy’s video game fortunes headed south in a hurry. The decline was exacerbated by earlier losses from the ill-fated Sorcerer personal computer. In the summer of 1981, Exidy had sold its Data Systems Division to a New York venture group called Biotech Capital Corp but the losses continued to affect their bottom line for months. At the 1982 AMOA show, Exidy had debuted Hard Hat (which they billed as the first “educational” game) and Snapper[2]. Neither went anywhere. Snapper never even made it into production."

[Larry Hutcherson] "I remember Snapper. Interestingly enough that game made more money when it was unplugged than when it was powered up. Yes, that's correct. More people put a quarter into the machine when the screen was black than when they could see what the game screen looked like….It was cancelled immediately after the first field test"

They weren't entirely without hits, however. The trivia game Fax (released in March) did moderately well. The game was designed to attract locations that might not normally have video games as well as to counter the negative press video games sometimes got. Exidy even produced solid oak "Elegante" model to appeal to upscale clientele.

[Pete Kauffman] You could put this game in the Hyatt Regency…and if you take a Fax game to show your legislators or local council, you can say this is the direction our industry is going with technology. It's fun but it's also educational. It's a positive type of game you can use to sell people who are negative on games. You can point to it and say "Here is our industry"…(laughs) They might pull out a Death Race game and say 'No, here is your industry[3]


The game's multiple-choice questions (which were to be replaced regularly) were submitted by employees throughout the company, who pored over almanacs, encyclopedias, and dictionaries in these pre-internet days (eventually Exidy sponsored a nationwide contest to find questions). One question that generated a lot of phone calls asked what "Big Ben" was. The choices included "clock" (incorrect) and "bell" (correct). Other questions were a bit more tongue-in-cheek (i.e. "What is a brassiere?" - A Bust Stop). Fax wasn't a smash but it was enough of a hit to merit a sequel.
Crossbow 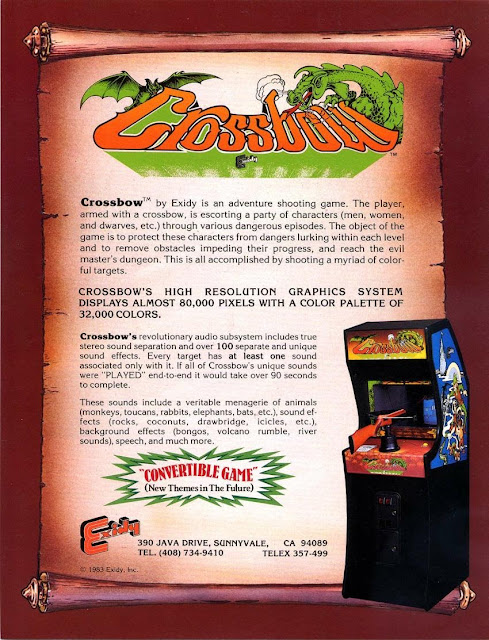 In November, Exidy released the first in its “alliterative shooting” series, which consisted of a dozen games released between 1983 and 1988. Crossbow was a throwback of sorts to the old electromechanical rifle games. The player controlled a crossbow (created by Barnett Crossbows of England), using it to protect a group of onscreen "friends" (including a wizard, a dwarf, an amazon warrior etc.)from a host of different enemies while avoiding hitting the heroes with a stray shot. Among the dozens of different enemies were vultures, werewolves, fireballs, lava, ghosts, and more. The player could also plink away at bonus targets like street lights and crowns. If the player safely escorted at least one friend to the other side of the screen, they could navigate across various levels on a map by shooting colored boxes. Levels included a desert, an ice cave, a ghostly street, a jungle, and (finally) a castle, where the player faced off against the Master of Darkness.

Nick Ilyin was the game's designer while Larry Hutcherson handled the level design, using a special programming language developed by Hutcherson specifically for the game's hardware, which had been custom-designed by Howell Ivy and was called the "440 System". The language included a number of features that were quite innovative for the time such as multi-threading (the ability to handle multiple program "threads" running at once. It was a "pseudo-operation" language that included a number of simplified instructions that allowed novice programmers to design levels without getting into the details of assembly-language programming. Unfortunately, Hutcherson was the only one who was proficient with it and ended up rewriting most of the levels.

Crossbow featured pulse-pounding gameplay and was perhaps the first game to use all digitized sound and music , courtesy of newcomer Ken Nicholson

[Ken Nicholson] "During high school in Cupertino I was one of six nerds invited to join the extracurricular computer club. The club was an experiment run by a math teacher and he managed to get computer equipment donated from HP. I liked experimenting with natural-language parsing programs -- the kind of thing Siri does.
Myself and another one of the computer club members somehow managed to get volunteer jobs apprenticing for software engineers at NASA Ames Research Center in Mountain View. Another computer club member met Steve Wozniak on the bus and he and another club member ended up being one of Apple's founders."


…during college I landed a job as an IT engineer for a small credit union. When that job ended I started my own software consulting business called Syntax. (A friend wisecracked: "They're taxing that now?")…
My business was based in Eureka, CA. Business was good but I decided that I was missing out on the video game boom and the legendary $100K+ salaries that video game developers were getting in Silicon Valley. So I relocated to Mountain View to try to break into the video game business.
Though I did take a few computer science and electronics classes in college, my major was theatre. I studied lighting, sound design and acting. It turned out these skills were particularly useful in the game industry.


The sound digitizing hardware used ADPCM - a compression algorithm developed by Microsoft. While the hardware was state-of-the-art for its time, storage space (especially for music) was limited.
[Ken Nicholson] "One of the weaknesses of the 440 system's audio capability was in music. Digital audio storage space was very limited and there wasn't room to store more than a few notes or phrases of music, with the rest of the space needed for sound effects. If you listen to the soundtrack of those 440 games you'll hear that things that sound like music are actually composed of shorter samples. The bugle call "charge" is an example. Also, some of the sound effects are reused but at a higher sampling rate or played back in reverse.
For cost reasons the digital audio data was stored on ROMs which were very costly to master. In later games I was asked to reuse surplus ROMs from earlier games. That required some tricky sequencing of digital audio clips to avoid the games from sounding too similar."
Nicholson turned to a number of interesting sources to create sound effects for Exidy's line of shooting games.


[Ken Nicholson] "Creating the sounds was a lot of fun. To get the sound of a skeleton exploding I went to a bowling alley and recorded someone bowling a strike. I went to a duck pond to record ducks. Most of the sounds, though, were recorded right in Exidy's offices. The Amazon warrior princess death sound was a slowed-down version of one of our female co-workers' screams. The iconic "You will die" of the Evil Sorcerer in Crossbow was my voice speaking into a metal wastebasket."
Crossbow also featured more RAM than most games at the time with 52 64k RAM chips. This was due to a (wise) decision Howell Ivy and Pete Kauffman had made at the 1982 CES to focus on games with more memory and graphics capabilities rather than pursuing the new laserdisc technology.

[Pete Kauffman] We decided not to go with the laserdisc specifically because of its drawback of the track-to-track access time…Solid-state digital has the advantage of total interaction[4].