The third thing I found interesting in Allied's reports was not a video game topic but a pinball one - Allied's cocktail pins and when they started making them? Most sources list Take Five, released in April, 1978, as Allied's first cocktail pin, but the annual reports/10ks show that they started building them MUCH earlier. 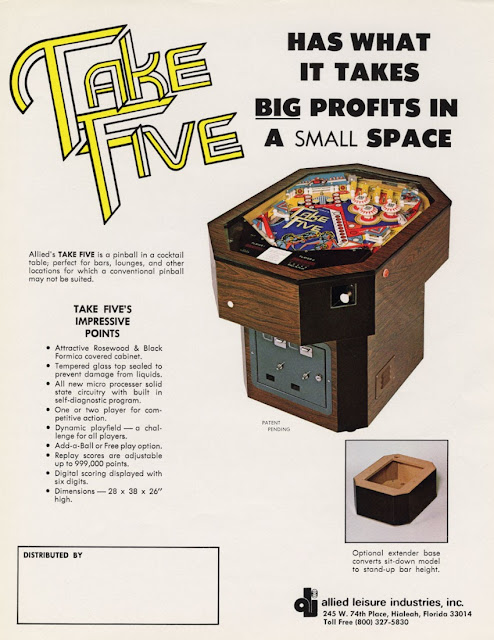 Most gamers who were around in the 1980s remember cocktail table video games, but a lot of them don't know that they made cocktail table pinball games as well. The heyday of cocktail pinball (if you could call it that) was brief - the vast majority of the games were released in 1978 and 1979. Companies that made cocktail pins in this period include Game Plan, Midway, Mirco Games and, of course, Allied Leisure Industries.


The concept wasn't entirely new. As I mentioned in a previous post, back in the 1930s, Rotor Table Games of New York had produced at least two cocktail table pinball games - Confucius [sic] Say and Cross Town. These appear to have been anomalies, however, and the next games didn't appear until late 1970s. 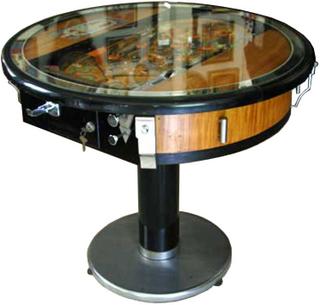 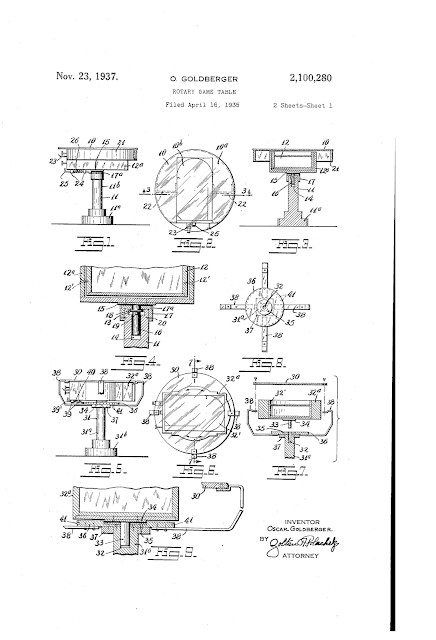 But which modern cocktail pinball game was the first? Did anyone beat Allied's Take Five out the door? 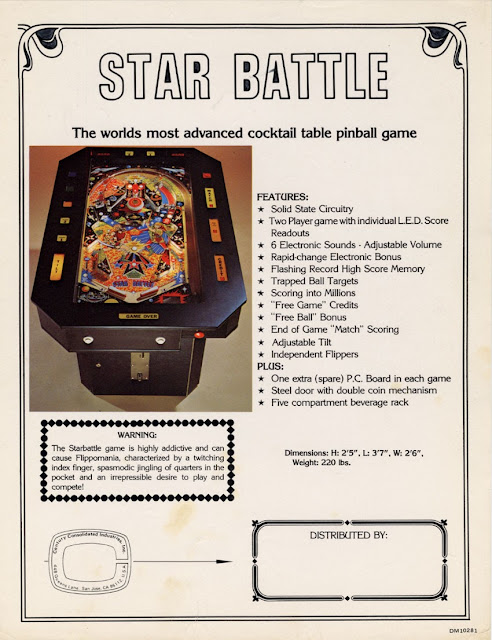 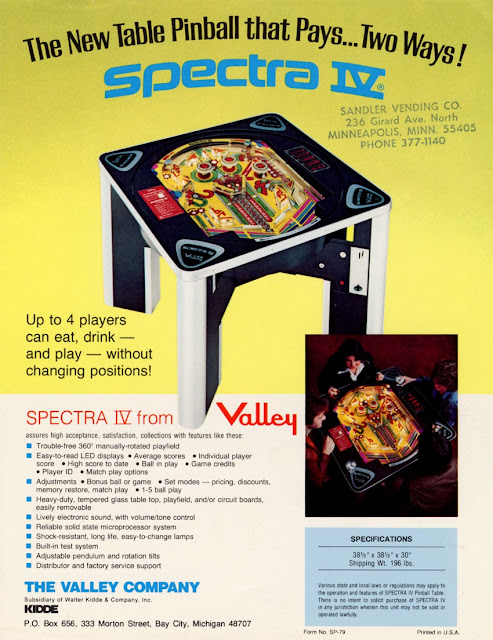 Around this time, Coffee-Mat Industries released Cosmic Wars and Star Battle (the latter is the same game as the one released by Century). The Internet Pinball Database doesn't list a date but notes that it was prior to December, 1978 because that is the earliest test date mentioned in documents they received from the designer. I'm not actually sure if the dates on IPMDB are normally release dates, but this seems to indicate that they sometimes use test dates. 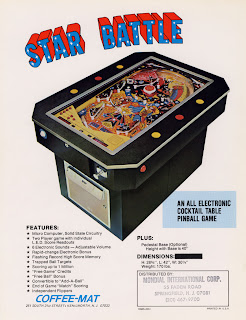 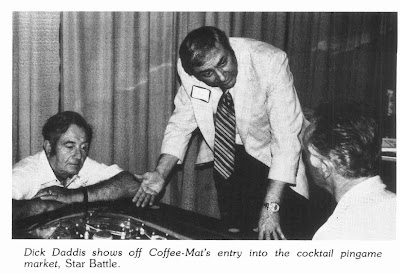 The introduction of Cosmic Wars was announced in the 11/15/79 issue of Play Meter.

The first modern cocktail game listed in the Internet Pinball Machine Database is Fascination Ltd's The Entertainer, released in September, 1977. Fascination, however, didn't actually design the game. Which takes us back to Allied Leisure.
﻿


﻿
The first reference I found to cocktail table pins from Allied was in their 1976 10K report. Allied had shutdown pinball production in June due to unexpected quality issues. The report mentions that they relaunched the pinball line in November, 1976 and then says that they "introduced a new concept in pinball games, i.e. a cocktail table version…". It is not clear however, if they started making cocktail pins in November, or some time later. The report also says that to date, Allied had made 300 "stand-up" pins and 800 cocktail pins. Note that the 10K report was created in spring of 1977, if not later so the 800 may include games made in early 1977.

Allied's 1977 report claims that they introduced a cocktail pin in April, 1977. This seems to conflict with the information in the 1976 report but as I mentioned, that report was created in spring, 1977 or later - possibly after April, 1977. OTOH, I don't think it was created TOO long after April (I suspect they had an SEC deadline they had to meet). OTOOH If they didn't produce their first cocktail pin until April, it's hard to see how they could have produced 800 by the time of the 10k report (unless it came up far later than normal).

The 1977 report reports that Allied had made ca 3,500 cocktail games to date.


The big question is: What games were they talking about? I've never seen any reference to a cocktail pinball game with the Allied name in 1977, and certainly not in 1976.

The above is from their 1977 10k report. Allied did have an "exclusive distributorship arrangement" with Fascination Ltd (of Elk Grove Village, IL). Fascination was founded in August, 1973 as National Computer Systems Inc. and made one of the first (they claim it was THE first) cocktail table video game in October, 1973 (more on that in a later post).

In September, 1977 Fascination released The Entertainer - a music-themed cocktail pin featuring the likeness of Roy Clark of Hee Haw fame. The following articles are from the September 1977 issues of Play Meter and RePlay respectively (the guy to the right of Roy Clark is Bob Anderson of Fascination). 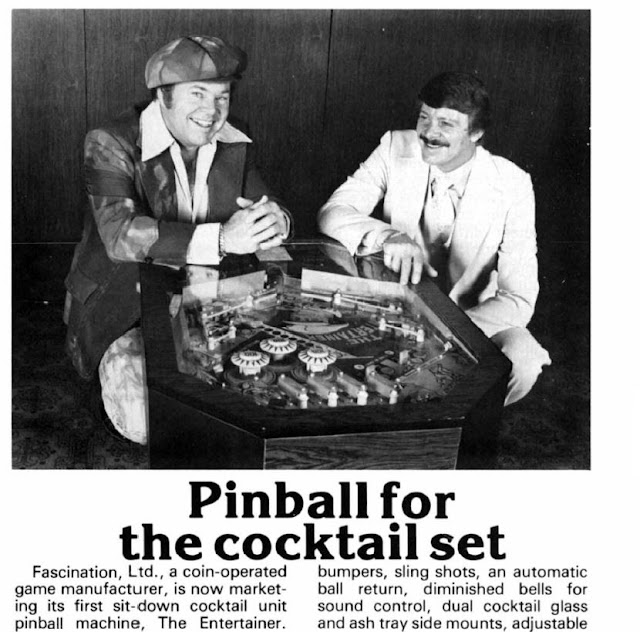 The game, however, was actually designed by Allied Leisure, as this article from the 12/77 Play Meter makes clear: 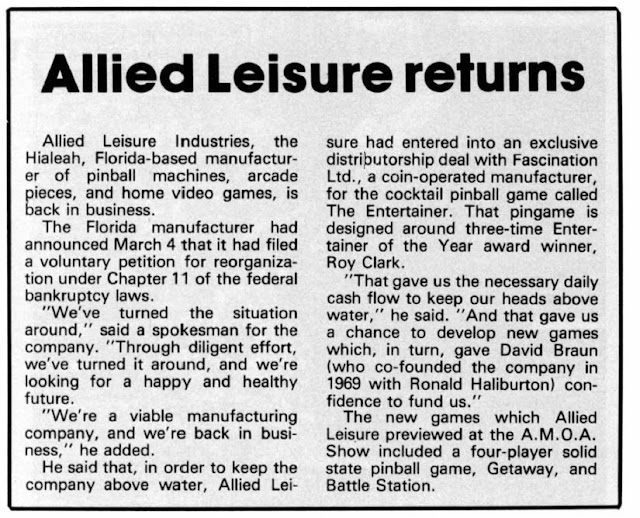 In early March, 1977, Allied filed for bankruptcy. They were discharged from bankruptcy in November, 1977. According to the article above, their deal with Fascination saved them from going under. Other accounts I've read seem to intimate that Allied was unhappy with their deal with Fascination (they didn't come right out and say so , I had to read between the lines - which is always dangerous). In addition, Allied had already released a Roy-Clark themed standard pinball called Super Picker earlier in 1977. They had inked the deal with Clark in late 1976. The driving force behind the idea was Allied's marketing director Arnold Fisher, who was likely hoping to reproduce Bally's success with licensed pins like Cap'n Fanastic and Tommy (he didn't).  Given this, it seems to me that Allied would have wanted to release The Entertainer under their own banner and probably ceded the rights to Fascination only reluctantly (though that is mere supposition on my part). In any event, they got out of their arrangement with Fascination in 1978 and started producing pins under their own name.


But if The Entertainer wasn't released until September, 1977 then what were the games Allied released before then?


Perusing my collection of RePlay and Play Meters, I found a few intriguing hints.

I've never seen any other reference to a "video pingame in a cocktail cabinet" from Allied. This sounds like a video version of pinball (like Exidy's TV Pinball) rather than a video/pin combination. There is a flyer for an Allied cocktail video game, but it has no date and I don't know if it was a pinball game (it appears to be a ball-and-paddle game) 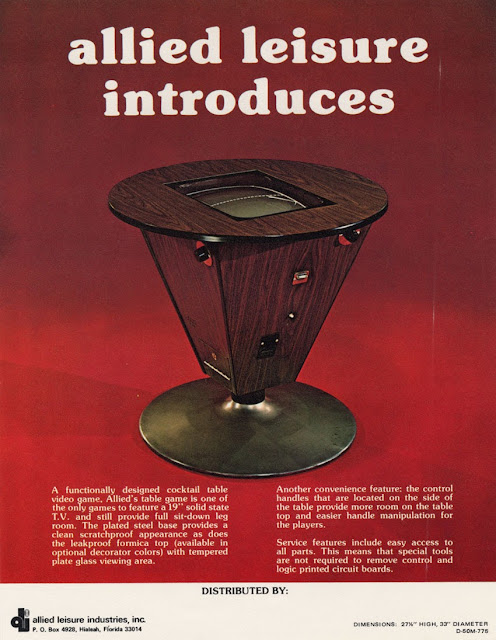 Speaking of Chase, it appears to have been a very cool looking sit-down air combat video game: 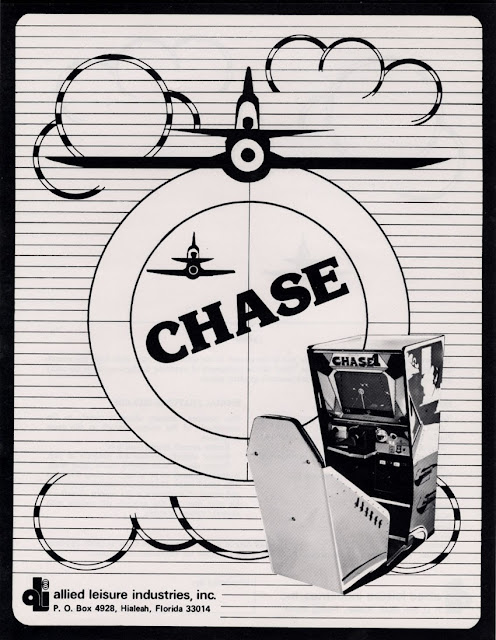 It was mentioned in their 1977 10k report, which said they only made 200 (unless they also made an EM game with the same name at the same time, which seems doubtful). Don't ask me what X-11 was, though I suspect it was an EM game, not a video game.

But back to cocktail pins. Here's an even earlier mention from the June, 1976 Play Meter. This one is reporting on Allied's recent spring distributors meeting in Miami. If this wasn't an Allied-specific meeting, I'd think that maybe they were talking about Mirco's Spirit of '76 but they appear to be talking about an Allied "tennis and pin cocktail table" of the same name. Again, this may be a video pinball game in a cocktail cabinet and/or may be the game pictured in the flyer above.