The Ultimate (So Far) History of Allied Leisure/Centuri - Part 2

Paddle Battle and Tennis Tourney - The Video Game Era Begins
In November of 1972, Atari released Pong and Allied engineers quickly purchased a copy of the game then had it shipped to their Florida factory so they could take a look[1]. 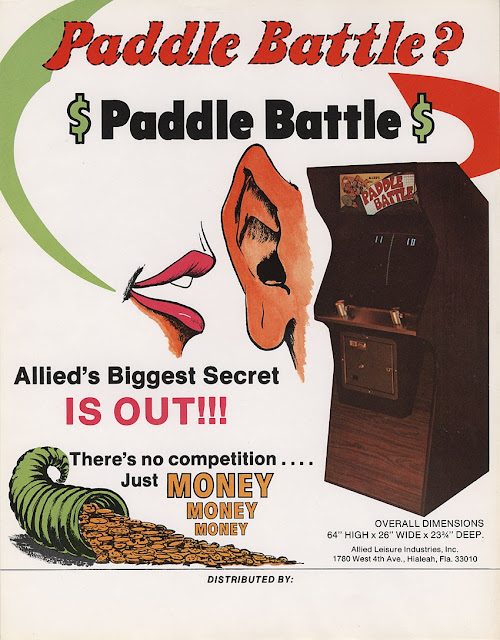 [Jack Pearson] Allied Leisure heard about Pong and we got a distributor in California to send us one and we paid him about twice what it cost him to buy it. We didn't know anything about solid-state games. We were all relay logic so we took it to a company in Chicago called URL and they more-or-less copied the circuitry and started making boards for it. We came out with Paddle Battle and I think we sold more than Atari did.
URL was Universal Research Laboratories, a contract electronics firm in Elk Grove Village, Illinois (in later years they would create a number of home and arcade video games and even have a video games division of their own).


[Troy Livingston] When Pong came out, we found out about it and somehow acquired one of the pong units …and literally took it apart and realized that it wasn’t made for the coin-op industry the electronics were just never going to survive coin-op…so I re-designed the power supply, the coin circuitry, and the power on the board and then worked with URL, who resigned the logic board, which had 76 or 77 7400-series TTL chips on it.


There were other design challenges as well. Since video monitors didn’t really exist at the time, Allied (like most other video game companies) had to turn to a different source for their displays.


[Troy Livingston] The first year Paddle Battle came out, we used to buy Hitachi and Zenith black and white TVs and maybe a few Motorolas. The salesperson for black and white televisions for one of the major chains came to our plant January 2nd and we bought his entire allotment for the year on January 2nd. The salesperson went away and said “That’s it for me, I’ve got my bonus and I’m done for the year” and he retired for the year…We took out the circuitry that made them a TV and all the tuner circuitry, went into the video amp circuit and made them into monitors and dropped them into the box and sent them out that way.


After gutting the televisions of their electronic innards, Allied was left with thousands of TV tuners. Unable to find a  use for them or get rid of them, they ended up tossing them in a dumpster. Technical challenges or not, Paddle Battle proved a huge hit for Allied – the biggest hit, in fact, that the company ever had.


[Troy Livingston] We had standing orders for months to fill semis full of games. The distributors said, “Just keep shipping truckloads until we tell you to stop.” I think we made 17,000 Paddle Battles and then we came out with a four-player, Tennis Tourney. I think we only sold about 4 or 5 thousand Tennis Tourneys and then it pooped out.


Jack Pearson remembers that the game sold even more.
[Jack Pearson] We sold 22,000 copies of Paddle Battle[2] and we followed it up with a 4-player called Tennis Tourney. Gene Lipkin was our sales manager at the time and Dave Braun told him that he would give him ten dollars[3] for each Paddle Battle he sold. When he didn’t get his money, he left and later became president of Atari. 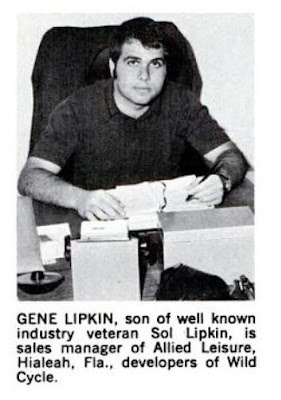 The son of coin-op veteran Sol Lipkin (who had a long career at American Shuffleboard and National Shuffleboard), Gene  Lipkin was one of the youngest sales execs the coin-op  industry had ever seen. He wasn't the only Allied sales exec to leave for Atari. A year or so after Lipkin moved to Atari in early 1975, Allied hired Joel Hochberg, who had worked in the industry since 1956 and was working 90-hour weeks in a broken arcade when Allied tabbed him.  He later joined Lipkin at Atari.

While Atari eventually got the best of Allied in the personnel department, in 1973 it was Allied who was getting the best of Atari by beating them on their own game. In fact, with a likely 17,000+ units sold, Allied may well have had the bestselling Pong clone of them all. In some ways, it isn't surprising that they were able to outproduce Atari. While Allied wasn't exactly a seasoned veteran, they had 4 1/2 years of coin-op experience under their belt at a time when Atari was only a few months removed from the days they had to struggle to make just 10 Pong units. Allied also had a much greater production capacity. This was probably a matter of necessity rather than choice. As practically the only coin-op company in Florida, Allied didn't have a network of suppliers ready at hand like there were in Chicago. Allied had to make everything itself. 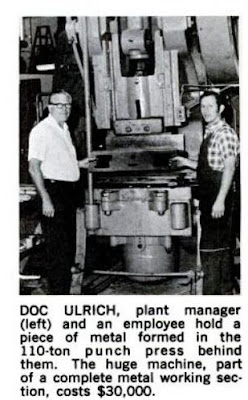 [Ron Halliburton] You have to understand that at that time we did everything onsite. We built transformers, we built cabinets, we did our own sheet metal, we did c&c stamping even back then – that required a great deal of people. We were probably up around 250-300 people at that time[4].


Allied more than tripled the size of its facilities in 1973 and were sprawled out over 3 separate buildings: a 30,000-square-foot manufacturing, headquarters, and R&D facility; a 28,000-square-foot cabinet shop, and  a 38,000-sqaure-foot complex that housed silkscreening, fiberglass, a paint shop, and metal working (including a $30,000, 110-ton punch press).
[Jack Pearson] We had better production facilities [than Atari]. Back then, to us, a year was a long time because we were used to having to come up with a new game every three or four months and when you had to do tooling and everything else, it was a real burden. We [started producing the game] right after Atari and we had a better sales staff and a better factory. We got up to producing 150 a day. At one point we wouldn’t take an order if wasn’t a tractor-trailer-load full, about 40 games. 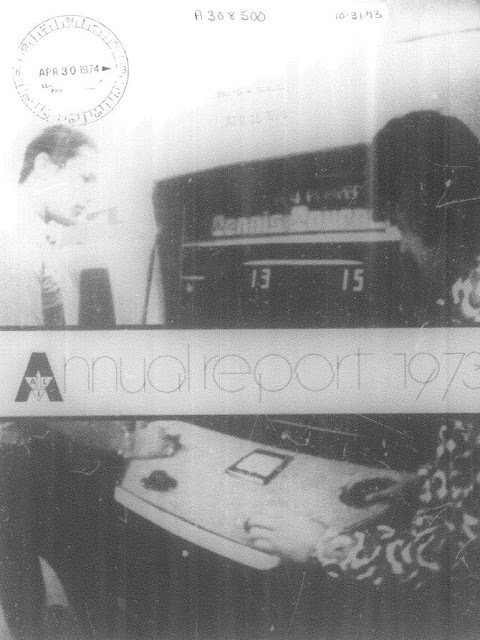 Given their edge in manufacturing, it's no wonder that Allied was able to out-produce Atari, but how did they manage to top the sales of other veteran coin-op companies like Chicago Coin, Williams and Bally/Midway who produced Pong clones of their own. It may have been because they got to their game to market first.


[Jack Pearson] Our philosophy was that if you wanted to make any money you had to go out there and get it first and go like the devil while you've got it because someone else is going to be coming with it later. So put it out and go as fast as you can so that by the time the next guy copies it and gets into the market you will have your profit out of it. And that was the philosophy we all lived on.


While Allied only beat Midway to market by a month or so, that month may have been crucial.


[Jack Pearson] We were selling a ton of Paddle Battle and we had already designed Tennis Tourney. Since we had the money we could afford to stock inventory so we made a few hundred Tennis Tourney, boxed them up and kept them in the warehouse. We didn't tell anyone about it. We were going to wait until the sales on Paddle Battle dried up. Then Midway came out with their 2-player game. I think we were selling at $995 and they came in at $945 to try to get a piece of the action. So we dropped to $895, they dropped another $50, we dropped another $50 and it kept on until we got to, I think, $795. Now we'd already made our profit and Midway couldn't make any money selling at that price. Then we announced the 4-player and Hank Ross told us that they couldn't give their game away. That's an example of the marketing strategies we had in those days.

In some ways it was a bit surprising that Allied was able to get a game to market so soon and build so many so quickly. In earlier years, they had been plagued with production delays. In 1972, Allied had never had more than one game in production at a time and  often had lags between one game in the next. For the entire month of April, their production line had sat idle - a potentially fatal situation for manufacturing company. In addition, they rarely brought a game back into production after it had stopped and usually kept little inventory on hand. In 1973 they had as many as four games in production at once and scheduled overruns and brought games back into production to meet renewed demand (Crack Shot, for instance, was brought back into production twice). In 1972, Allied had only been able to turn out 40 games a day. In 1973 they were cranking out 150.


Then, Allied scored another coup when they became one of the first companies on the market with a 4-player Pong game when they released Tennis Tourney in July of 1973.


[Ron Halliburton] Everybody was trying to catch up with everybody at that point. What we did was we built the boards and got the components in and I think we built 500 or 1000 of them and didn’t show them to anybody – blew out our Paddle Battle’s and then released this new 4-player that nobody knew anything about and it destroyed the 2-player market overnight and Hank Ross has never forgiven me for that even though we’ve been great buddies for a long, long time.


Ross wasn't the only one who was upset. Nolan Bushnell was livid that Allied had come out with their 4-player game two months before Atari released theirs (Pong Doubles).  In November Allied released its soccer game Super Soccer. The video game explosion had put all of Allied's other plans (including their full-scale entry into the pinball market) to the back burner. By January, 1974, they had six games in production at once and four were video games: Tennis Tourney, Super Soccer Ric-O-Chet, and Deluxe Soccer (the last two for export only[5]).

[1] The Pong Story website reports that Allied actually licensed the game from Atari, but other sources disagree.
[2] The different figures given by Pearson may be due to the fact that he is recalling the total number produced of Paddle Battle and Tennis Tourney combined.
[3] In an interview on www.centuri.net, Lipkin recalls that he was promised $15 for each game sold
[4] Haliburton was referring to a time around 1974 here. Allied's annual reports show that they had about 250 employees at the end of  fiscal year 1973, up from 200 the year beofore.
[5] Allied also had an electromechanical game called Galaxy Raider in production, but no trace of it has turned up in the years since.
Posted by Keith Smith at 8:46 AM