While perusing early trade magazines, I often come across information that challenges existing ideas involving well-known video game "firsts". Personally, I'm always skeptical of such claims and hesitant to state definitively that something is the "first" instance of such and such because the claims all too often turn out to be incorrect.
I think this is even more true with video games since the early years of video game history are largely unknown and unexplored and people often make or repeat such claims without examining the evidence (which often doesn't exist).

Today, I examine a couple of these claims.

The First Video Game With A Microprocessor

The first is the question of the first video game to use a microprocessor. The standard answer has always been Midway's Gun Fight and that may well be true. In one of my first posts, I examined the idea that PMC's Aztec might have beaten them to the punch but it turns out it didn't.

Today I look at another candidate that has much more solid evidence behind it. - Mirco's PT-109 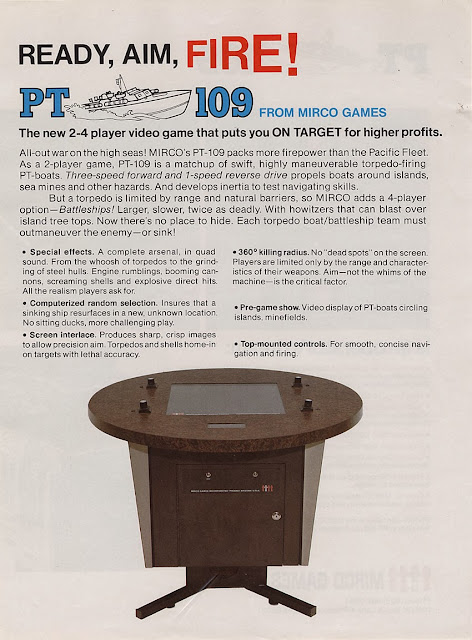 An article on Mirco in the November, 1975 issue of Play Meter had this to say: 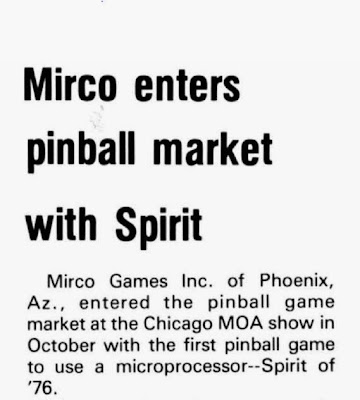 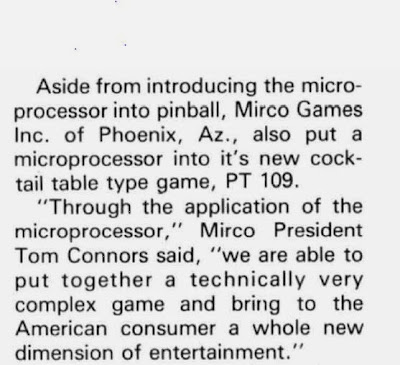 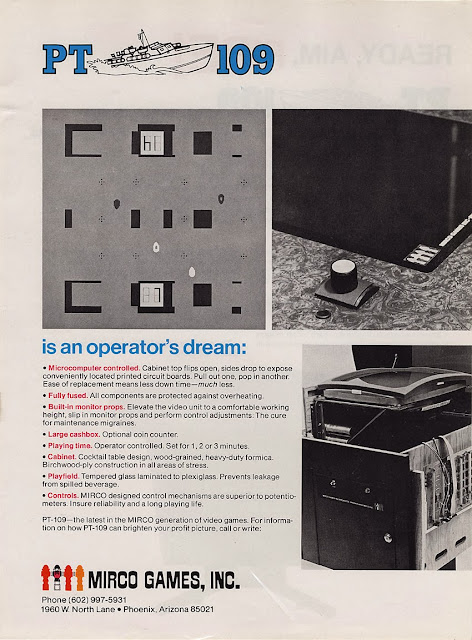 Note that it claims the game is "microcomputer controlled".
While PT-109 was on display at the MOA, that doesn't tell us when it was actually released. The game's release was announced in the November, 1975 issue of Cash Box, though I don't have the issue handy to check the verbiage and they may have just been announcing that it was on display at the show (though some companies actually started taking orders for their games at the MOA).

I would like to confirm that PT-109 had a microprocessor and if so, what kind, but It looks like it at least came out very close to Gun Fight if not at the same time.

In my earlier post, I mentioned another candidate for first microprocessor game - Jerry Lawson's Demolition Derby. Exactly when the game was created is unclear. Lawson says he started in 1972 or 1973 and either Goldberg or Vendel (I think - I forget which one and don't have my notes handy) report that Alcorn told them about Lawson paying them a visit during their Pong days. Demolition Derby used a Fairchild F-8 microprocessor but likely didn't have one until 1975, when the processor was released (though as a Fairchild employee, Lawson could have gotten a preproduction version).

Lawson supposedly sold his game to Major Manufacturers, who tested it but never released it, but I have not been able to confirm that fact. I did find the following interesting comment in the October, 1975 Play Meter however. 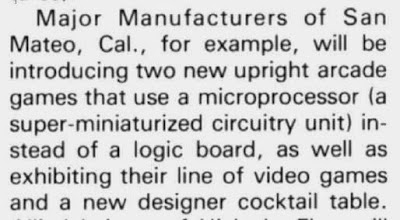 Once again, the subject is the upcoming MOA show. The article mentions that Major would be showing two "arcade games" and the wording makes it sound like they are not talking about video games, but is it possible that one of the games was Destruction Derby?

Finally, there was this mutant from the 1975 MOA that I discussed in an earlier post: 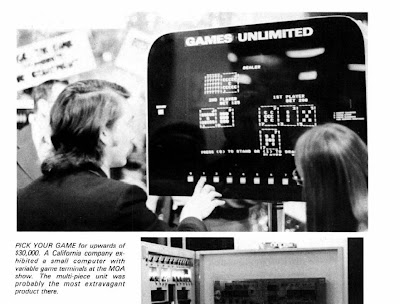 I don't know if this had a microprocessor, but given that it had a central unit that controlled multiple remote terminals, I'm guessing that it did. Of course, I don't know if it was coin-operated. (though it WAS on display at the MOA). The March, 1976 RePlay reported that the manufacturer (California On-line Computer Systems) was working on a "super machine" that would probably require an attendant rather than taking coins or bills and planned to show it at the California State Fair in August. 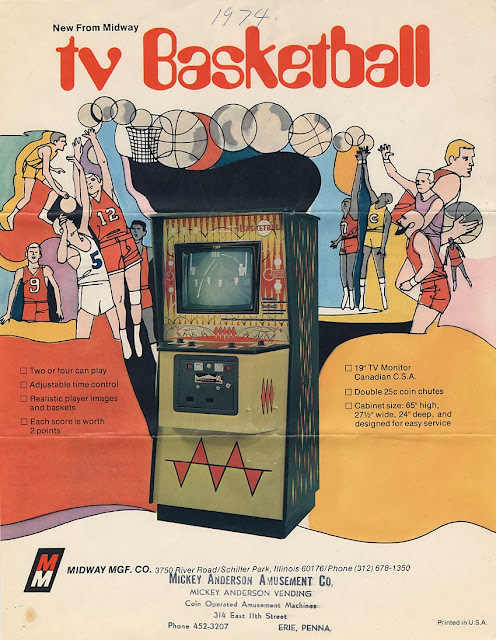 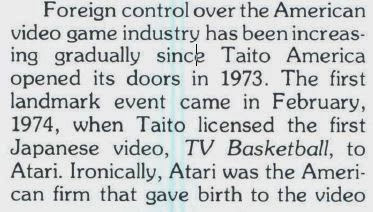 According to this, TV Basketball was the first licensed Japanese video game to be released in the US (a title that is sometimes awarded to Taito's Speed Race, which Midway released around February, 1975 as Wheels.
Of course, this article says that the game was licensed to Atari, which makes the claim a bit questionable. Did they first license it to Atari, are they talking about a different game, or did they just get it wrong. 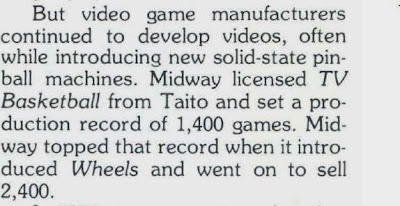 This time they say that the game as licensed to Midway, which seems correct. The production number, however, do not. The 1,400 figure for TV Basketball might be correct, but according to Ralph Baer's 1976 figures, Midway sold 7,000 copies of Winner (released April, 1973) and RePlay earlier reported the same thing. I believe Baer also reported that Wheels sold 7,000. Play Meter repeated the claim about TV Basketball was the first Japanese game in America but that one as also from 1985 and I haven't found any earlier evidence supported this.
If the game was licensed from Taito, what was the original?
It must have been Basketball. 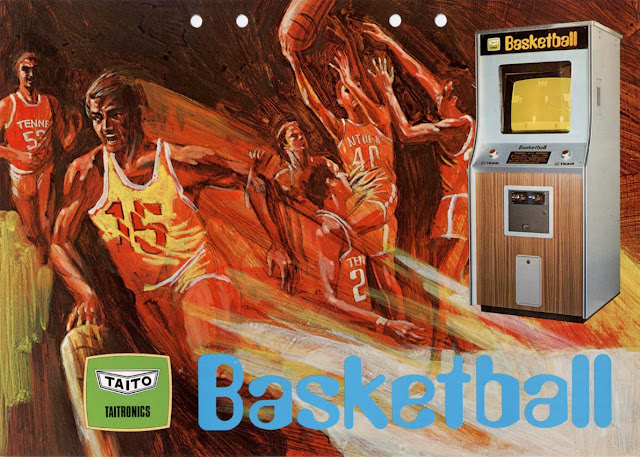 I have not confirmed the February, 1974 release date but TV Basketball is generally listed as a 1974 game, so it probably did come before Wheels. And speaking of Speed Race/Wheels, the main evidence that it was the first Japanese game in America seems to be a comment from designer Tomohiro Nishikado, who only said that he THOUGHT it might have been the first Japanese game in the US, not that it definitely was.
And speaking of TV Basketball, could it have been the first game to depict human characters onscreen? Off the top of my head, I can't think of another that came out before February, 1974 but I haven't given it a lot of thought.
BTW - if you haven't played TV Basketball, you can do so on the DICE emulator. It's really just a ball-and-paddle game with human-shaped paddles, however.
﻿
Posted by Keith Smith at 9:38 PM