Today's post is a quick one. It's obvious from reading this blog how invaluable I think trade journals like RePlay and Play Meter are to any student of coin-op history. One of my favorite features of these magazines is the annual operator survey or state of the industry survey.
They were usually published in the November issue, sometimes with another one in the spring. They contained a trove of statistics covering things like weekly earning by machine type, total number of games on location, market share, player demographics, new equipment buying patterns, total number of street locations and arcades, average number of games per location/operator, top operator complaints, and more.
My absolute favorite feature of the polls, however, was the list of top games for the year. I have always been an inveterate lover of lists and charts. I used to spend hours poring over things like the Baseball Encyclopedia and Joel Whitburn's Billboard books, so these were right up my alley.
Today, I'd thought I post the earliest such list I could find.
It appeared in the April, 1976 issue of RePlay and listed the top "arcade" games in the country. Note that while the term "arcade" games, when used in RePlay, normally did not include pinball games, table games (foosball, air hockey, pool tables), wall games, or ball bowlers/shuffle alleys - in this list, it appears to include any game that was found in arcades. 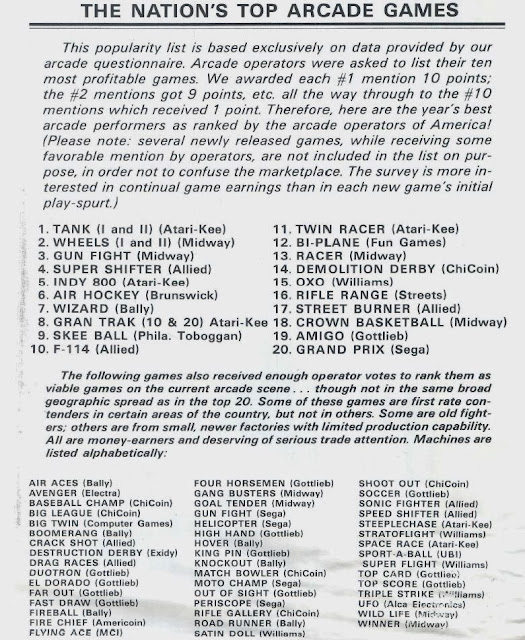