The Ultimate (So Far) History of Allied Leisure/Centuri - Part 6 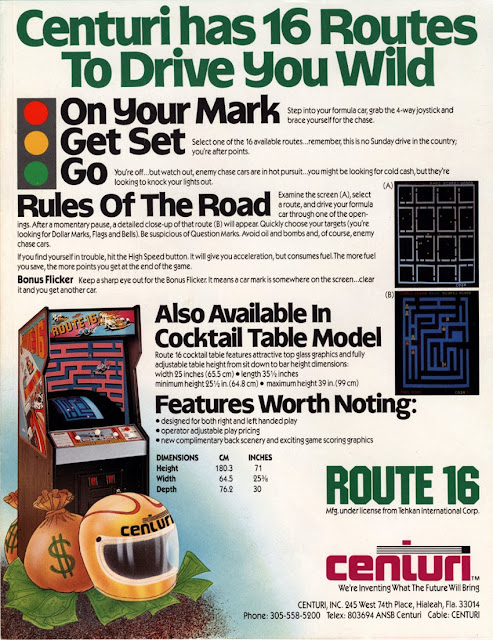 Less successful were Centuri’s other 1981 games. Route 16 (another Tehkan license – though it was likely developed by Sun Electronics) was a maze game in which the player drove a race car around a map containing 16 different rooms. When the player drove into a room, the screen switched to a close-up view of the room’s interior. The goal was to collect a series of treasures from each of the rooms. While it wasn’t as successful as Phoenix, Vanguard, and Pleiades, it probably sold in the neighborhood of 1,500-2,500 copies. 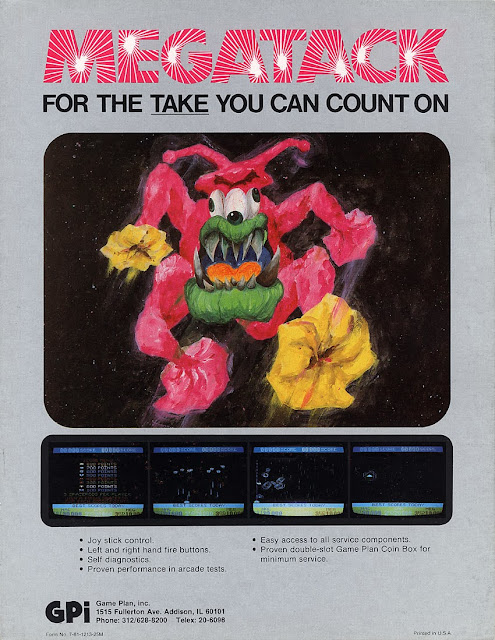 Meanwhile, Centuri hadn’t completely abandoned the idea of game development. After leaving Taito America, Ed Miller had managed to lure five of its designers away to work for him at Centuri where they designed Challenger, Killer Comet, and Megatack. Challenger was another vertical shooter, but with a few twists. Rather than firing strictly upwards, the player’s ship was equipped with a kind of laser shotgun that fired in three directions at once – straight upwards and diagonally to either side. Enemies mostly consisted of a series of multicolored geometric rings (though a snake like “space bogey” would occasionally appear). In addition to their shotgun, the player had a warp button that would teleport them from the bottom of the screen to the top, and a superbomb that would destroy multiple enemies. From time to time, a “bonus bug” that looked like an AT-AT walker from The Empire Strikes Back would walk onto the screen, allowing the player to connect to its nose (?) and suck up (eww!) bonus points. While the gameplay was actually somewhat interesting and the sounds were nice, the game’s graphics paled in comparison to those of other games on the market and Challenger probably sold only a few hundred copies. Megatack was basically a takeoff on the same theme with the addition of more enemies. Killer Comet featured the same basic gameplay but allowed the player to move freely about the screen. While the player could still only fire in the same three directions as Challenger and Megatack, they could control which way they fired with three fire buttons. Strangely, the game only awarded the player a single point for each enemy destroyed (which may be one reason why it wasn’t a hit). While all three games were designed in-house, Challenger was the only one released under the Centuri banner (though they may have produced Killer Comet for a short time[1]). Killer Comet and Megatack were both licensed to newcomer Game Plan.

1981 had been magical for Centuri, with the company generating more revenue in a single year than it had in its entire 12 ½ year history combined. Essentially the entire amount came from video games (another first for the company). The results were enough to make Centuri the 5th largest video game manufacturer in the country, behind Bally, Atari, Williams, and Stern[2]. Centuri’s peak may have come in December of 1981 when they landed three games in the Play Meter’s top ten - Pleiades at #9, Phoenix at #7 and Vanguard at #1.
Perhaps the most amazing thing is that they did all this while cutting their staff from 400 to under 200. Despite the smaller staff, Ken Beuck recalls that Centuri went from producing 10-15 games a day to around 350. The company's existing facilities combined with the licensed games had made production much more, well, productive. Things like PC boards, harnesses, and power supplies were now being provided by other companies. According to Beuck, the Koffman Group actually owned a number of manufacturers and wanted Centuri to buy their components from them. When Centuri asked for quotes, however, some of the companies didn't provide them until weeks after the deadline, by which time Centuri had already bought them elsewhere. While the owners didn't like this at first, they backed down when the new management team told them to let them do the job they'd been hired to do, pointing out that the company had been losing money up to now.


One person who wasn’t around to fully enjoy Centuri’s newfound success was Bill Olliges. In June, he left the company (reportedly on amicable terms) and his contract was terminated. He later formed a new development company called Techstar in Miami (who designed games like Eyes for Rock-Ola as well as a number of other games for various companies). Olliges’ contract with Centuri had included a bonus of 1.5% of the company’s pre-tax income in excess of $500,000. For fiscal year 1981, this would have amounted to just over $100,000 (more than his $75,000 base salary). Whether he forfeited his bonus is uncertain, but Centuri did cancel his stock options, though they apparently paid him around $100,000 and received first refusal rights on any games he might develop over the next two years. Ed Miller, meanwhile, was to receive a 2.5% bonus (about $175,000 for 1981). In July, the amount was amended to 1% of all income (in excess of $500,000) up to $7 million and 1.5% after that, with additional stipulations[3]. Miller himself would leave in 1982 and form his own company called Telko Properties, which worked with Techstar to secure licenses for their games. Centuri eventually brought in another coin-op veteran – Arnold Kaminkow – to replace Miller as president.
The Leisure Time Connection


On October 19, 1981 a company called Leisure Time Electronics filed suit against Centuri in Indiana charging them with delivering defective goods and making false and fraudulent warranty claims and seeking $3.15 million in damages. Nine days later, a company called Fascination International, Inc. filed suit against Centuri in Illinois for largely the same reasons. Both Leisure Time and Fascination (which trade magazines report were essentially the same company) were examples of what were called “blue sky” operators. Blowing into town for a weekend, they would set up shop in a local hotel or convention center then blanket the local media with ads promising easy profits in a “no cash” business. Potential customers were shown misleading media articles including exaggerated claims of the earning power of coin-op video games. Those who took the bait were sold substandard games at inflated prices, which often didn’t work and earned only a fraction of the advertised figures. Some even offered bogus services to help scout locations, only to fail to deliver once the customer left. Some failed to deliver any goods at all. In June of 1981, after a number of complaints, the California Attorney General took action against Leisure Time, Fascination, and another company called Potomac Mortgage, eventually fining them (see the chapter on legal issues for more details). By 1982, Leisure Time and Fascination were also under investigation in Iowa and Denver. At least some (and perhaps all) of Leisure Time’s games were made by Centuri. In an article in the November 15, 1981 issue of Play Meter Centuri’s marketing manager Ivan Rothstein claimed that Leisure Time was "a reputable company". Asked if the games Leisure Time sold could earn the promised minimum of $80-100 a week, Rothstein said "Oh, that should be no problem.”
What Centuri games was Leisure Time selling? One possibility is that they were the three games that Centuri introduced at the 1979 AMOA show, but apparently never released (Battle Star, Space Bug, and Lunar Invasion) but the descriptions of those games[4] do not match up with the games Leisure Time is known to have sold (Space Ranger, Moon Lander, and Astro Laser - knockoffs of Taito’s Space Invaders, Lunar Rescue, and Space Laser respectively). The bigger question is how Centuri ever got involved with Leisure Time in the first place. The company had been running their scam since at least January of 1981, so the deal appears to have been struck before Allied’s amazing transformation, when it was still struggling to make ends meet.


While the Leisure Time deal may have occurred in the past, there were other causes for concern as 1981 came to an end. The scheduled January release of the Centuri 2001 jukebox had been pushed to May, then pushed again, and ended up not being released in 1981 at all. The problem, yet again, was technical issues (a disturbing development given Allied’s history). For some, the fact that Centuri was so reliant upon licenses, particularly Japanese licenses, was another cause for concern, leaving them vulnerable if the Japanese’s companies ever tired of the skimpy licensing fees they were receiving and decided to manufacture games on their own. All in all, however, things were going quite well indeed at Centuri as 1982 got underway and the company seemed poised for bigger and better things. The industry, however, was about to change.

[1] They showed the game at the 1980 AMOA show and Play Meter/RePlay catalog issues list it under both companies, though no flyer exists for the Centuri version, nor was its release by Centuri announced in any trade magazines.
[2] At the time, the top 6 video game manufacturers controlled 95% of the U.S. market.
[3] Again, this is all assuming that the two contracts mentioned in the 10K reports were for Olliges and Miller. It should be noted that I did not discuss the matter with Bill Olliges. The additional stipulations were that “…payment of bonus for 1981 is subject to an offset to income of $3,245,000 and bonuses for 1981 and 1983 were deferred subject to the company obtaining certain net sales in fiscal year 1982.”
[4] According to Play Meter, Lunar Invasion involved the player shooting down “traveling space mines while attempting to land his craft” while Battle Star was a more sophisticated game “based on the same theme.” Space Bug was a competitive game in which “two players attempt to push a series of 24 value squares up the monitor and into a larger square.”
Posted by Keith Smith at 8:56 PM