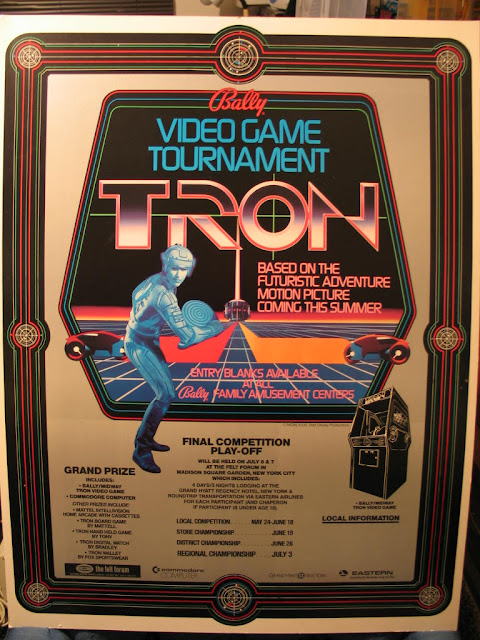 Back in November 2012, I posted about the disastrous Atari $50,000 Centipede tournament fiasco in October 1981. That tournament was a disaster, drawing less than 200 contestants – a far cry from the thousands some expected to show up. Just seven months later, however, Atari’s archrival Bally held another nationwide tournament that was far more successful. In May 1982, in conjunction with the opening of the movie and the release of the video game, Aladdin’s Castle and Bally staged a nationwide Tron tournament. Some 10,000 Tron machines were delivered to almost 400 Aladdin’s Castle locations throughout the country and Bally launched a million-dollar radio promotion campaign for the game. Unlike Atari’s October 1981 Centipede tournament, this one was a success. The exact number of players is unclear, but it appears that at least 120,000, and perhaps as many as 400,000, entered the tournament – though claims of over a million entrants were likely inaccurate[1]). 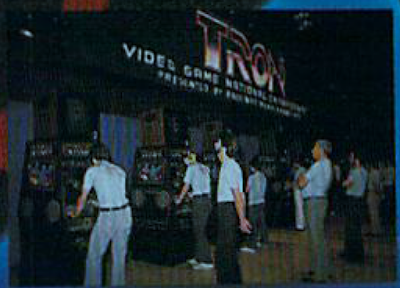 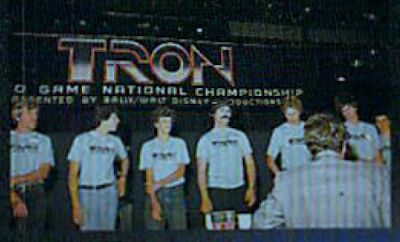 Thanks to the person who sent me the following pictures: 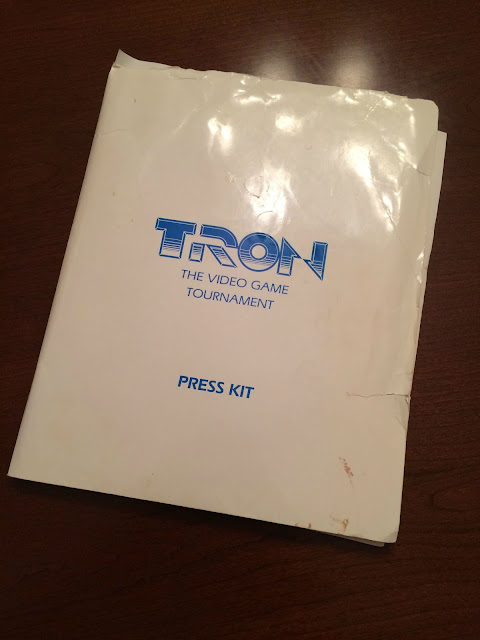 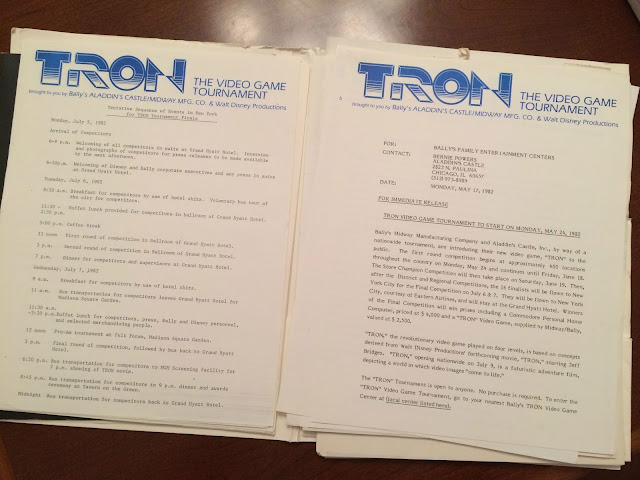 The action took place over seven weeks. During the first round the games were set to start on level one while in the district competitions, players would start at level five. During the early rounds, scores were so high and games so long that Midway produced a new chip that was installed in the games prior to the fifth round (Ross 1983). The final three rounds were conducted on levels seven, eight, and nine respectively. The top 16 players were given an all-expenses paid trip to New York, including a dinner and awards banquet at Tavern on the Green, and a special advance screening of the movie. The finals were held at New York’s Grand Hyatt Hotel and Madison Square Garden’s on July 6 and 7. Bally also flew in a number of east coast distributors for the event (a separate event and screening for west coast distributors was held at Disney Studio in Burbank [2]). Also in attendance were Bally Vice President William O’Donnell, Jr., Aladdin’s Castle marketing director Bernie Powers, and Bally marketing guru Tom Nieman (who handled the logistics). 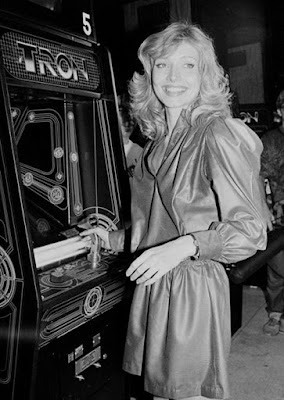 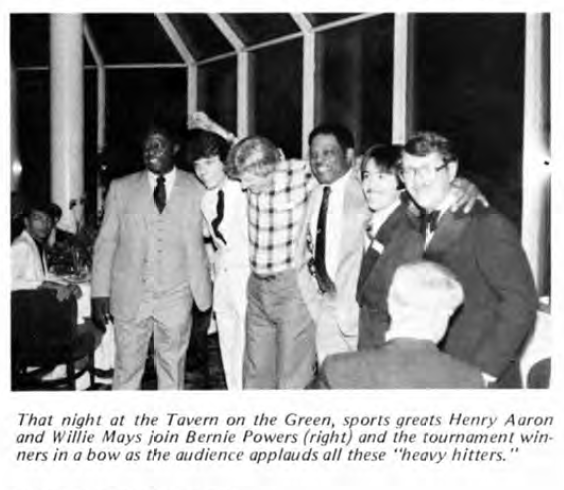 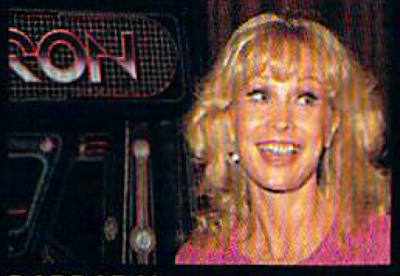 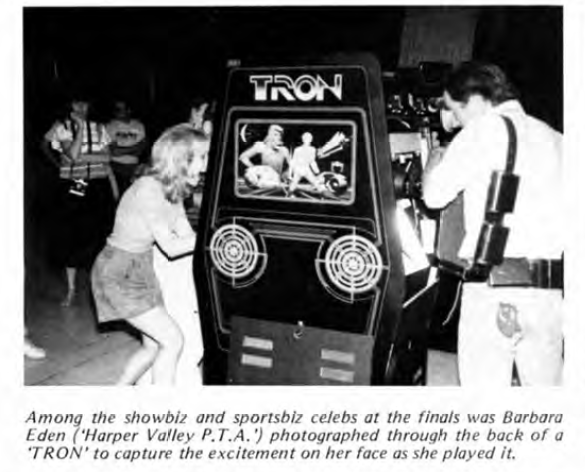 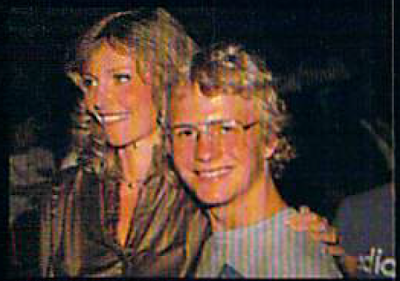 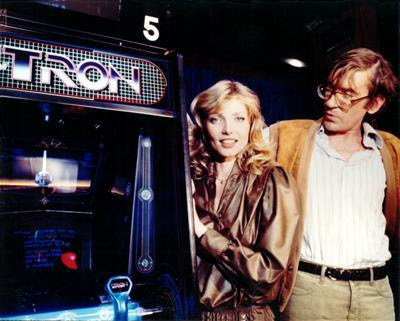 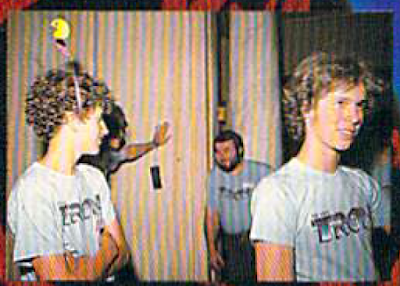 The first two rounds of the finals took place at the Grand Hyatt on the July 6. An early favorite was Sterling Ouchi of Torrance CA. The 18-year-old had scored a million points in the regionals and had record scores on Centipede and Star Castle in Electronic Games magazines first “National Vanity Board” in August 1982. Despite this, Ouchi scored just 50,000 points in the first round of the finals. In terms of overall career success, the standout player was Tim Collum of Boyd Texas. Collum had won the Texas Video Game Championship in June and would go on to win the That’s Incredible Ms. Pac-Man Tournament in October, the 1983 North American Video Game Challenge  and be named 1983 co-player of the year at Twin Galaxies’ 1984 Coronation Day event. Collum, however, does not appear to have been among the early leaders in the Tron tournament.
Meanwhile, Scott MacDonald, a 17-year-old from Houston, scored 294,358 points in the first half of round one. That was nothing. At two hours into the second half of round one, all of the players had finished their games. All but one – Richard Ross, a flea market worker from Jacksonville, Florida, who, at 29, was far older than most of the other contestants. As the other contestants munched on seafood salad, fresh kiwi, and chocolate mousse, Ross continued to play on. His game passed three hours, then four. When it finally ended after four hours and 22 minutes, Ross had racked up an astonishing 1,830,044 points, putting him comfortably in the lead. In round two, Ouchi rebounded with 331,669 points while MacDonald scored just under 60,000, blaming his poor performance on a “fuzzy screen and sticky joystick.” Scott Katkin of East Greenwich Rhode Island, meanwhile, scored an impressive 1,052,592 points. Once again, however, Ross dominated with another four hour, 1.5-million-point performance - despite losing 40,000 points when a photographer tripped over the game’s power cord. (Zanke 1982)

For the final round on July 7, the action switched to Madison Square Garden’s Felt Forum where Ross easily emerged as the winner with a combined three-game score of 3,958,901 points. His final score was over 1.2 million points ahead of runner-up Scott Katkin and 1.8 million ahead of Sterling Ouchi, who died just seven months later. None of the other finalists managed to break a million [3]. For his dominating victory, Ross won a year’s supply of game tokens valued at $260, a Commodore computer, and a full-sized Tron game. So why was the Tron tournament such a success where the Centipede tournament (a much more popular game) was such a failure? Probably because the tournament was so much better run. Rather than forcing contestants to fly to the tournament on their own dime, Bally held preliminary rounds in local arcades across the country. Atari and TGI could have done the same - though it was a bit easier for Bally given that they owned Aladdin’s Castle (on a side note, the fact that the Bally initially delivered Tron games exclusively to Aladdin’s Castle locations before releasing it nationwide caused some resentment among other arcade operators). In addition, the finals seem to have been much better organized, both in terms of the logistics of the tournament itself and in the media attention it drew (likely due to the work of Tom Nieman). Sadly, however, this tournament – like most of the early players and tournaments – seems to have been all but forgotten by those currently involved in the eSports movement. Perhaps one day, someone will do a proper history of eSports and give these early tournaments their due – but I doubt it. 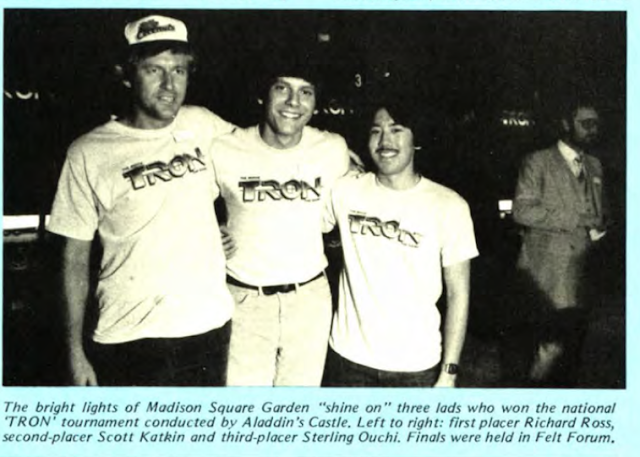 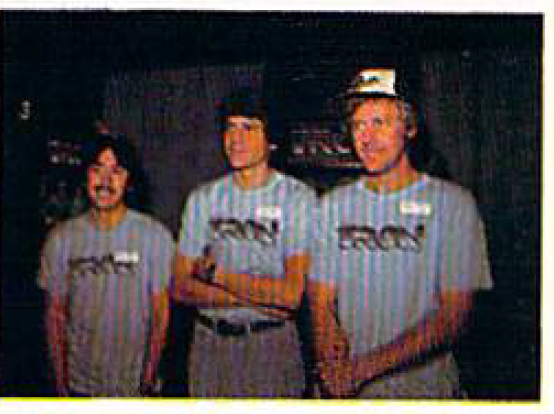 
[1] RePlay 8/82 reported that the tournament drew “some 400,000 overall” and 120,000 in the first week. Vending Times 7/82 reported that “over one million people originally entered the tournament.” Ross 1983 reports that the tourney attracted “over 1,200,000 entrants.” Electronic Games noted that the tournament consisted of “one million rounds of play.”  Why the discrepancy? A look at the tournament press kit produced by Bally may help clear things up. The kit contains a June 6, 1982 Bally press release reporting that "During the first five days, over 120,000 people entered the tournament. Even more mind-boggling than that is that on the practice machines in each of the nearly 400 TRON Tournament locations throughout the country, over 250,000 plays were recorded. Over 698 entrants were recorded at the Bally's Aladdin's Castle in Bell Air Mall, Mobile, Alabama." The kit also includes a July 1, 1982 press release noting that "The 16 Regional Finalists have been reduced from a field of 1600, which was whittled down to 400, and eventually trimmed to 48. During the first four weeks of In-Store Competition, 1,260,025 plays were recorded in both practice and real competition." These press releases seem to have been the source used by Vending Times, RePlay, and Ross. Vending Times, for instance, repeats the figure of 698 players at a single location. Vending Times and Ross seem to have confused the number of plays with the number of players. I am not sure of the source for RePlay's 400,000 figure but since they repeat the 120,000 figure, the 400,000 figure may have come from another press release and may reflect the total number that entered the tournament over the first four weeks. Ross 1983 reports that the district playoffs started in week five and they had to pare the field down to sixteen by the end of week seven. Given this schedule, one possible scenario is that around 400,000 entered the tournament during first four weeks, which were whittled down to 1600 players for the district playoffs in week five, to 400 for week six, to 48 for week seven, and to 16 for the finals

[2] Disney also promoted the game at Disneyland, installing ten games at the Starcade arcade in Tomorrowland and incorporating a special Tron attraction into the People Mover ride

[3] While it appears that all finalists played three games, this is uncertain

Note – Sources for this article include:

Email ThisBlogThis!Share to TwitterShare to FacebookShare to Pinterest
Labels: `