Todays post is an excerpt from a section of my book covering Atari's Centipede.
One of the promotions for the game (and one of the most infamous promotions of the golden age of video games) was the disastrous $50,000 World Championship held in Chicago in October, 1981.
Disastrous may actually be an understatement.
While the tournament is remembered today, the details are not.


Bailey’s instincts proved correct as Centipede became one of the first coin-operated video games to be played in large numbers by women. One of these players was Julie Winecoff, an unemployed North Carolina truck driver who spent her savings on a ticket to Chicago to play in a three-minute Centipede tournament sponsored by Atari in October, 1981. Winecoff made it to the finals of the women’s division only to be trounced by Ok-Soo Han, a Korean immigrant who’d flown in from L.A. After the match, Winecoff said “I’m never going to play another game of Centipede as long as I live. I’ve been whipped bad. I’ve been sure enough tore down[1]” 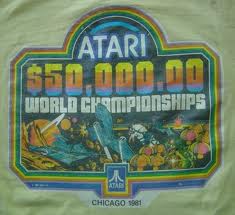 Sidebar - The Atari $50,000 World Championships
Despite the tough competition the tournament, dubbed the $50,000 Atari World Championships was an unmitigated disaster. Atari spent over $100, 00 promoting the tournament, sending out 1,500 promotional packages to operators around the country and launching a month-long ad campaign in Chicago. The tournament was part of the Tournament Games Spectacular $400,000 Weekend, which also featured foosball, Mark Darts, eight ball, and air hockey competitions. The tournament was organized by Seattle's Tournament Games Inc., an experienced promoter of pool and darts tournaments headed by Lee Peppard. Peppard was in many ways the driving force behind the explosion of foosball in the early 1970s. Peppard got his start in the amusement industry when he saw his first miniature golf course as a traveling dental tools salesman. He soon built four courses in his hometown of Missoula, Montana. In 1972 he was managing a bar in Missoula when he staged  a $1,500 foosball tournament.  He formed a company called Tournament Soccer to administer the tournaments. About a year after its founding the company produced a table also called Tournament Soccer - a cheap model manufactured in Taiwan. The 1974 Tournament Soccer tournament, held in Denver was a nationwide contest with $50,000 in prize money. The following year it increased to $250,000 and foosball was a full-fledged national craze. It was featured in a Sports Illustrated article in September and Peppard's tournaments had much to do with that. The tournaments were well run - held in high class hotels with excellent prize money. A handful of top players were reportedly able to make a living on the tournament circuit. A number of them even went to work for Peppard's company (which eventually became Tournament Games, Inc.).
When the video game boom hit foosball's fortunes headed south quickly. In a four month period from April to July of 1980, TGI ran three foosball tournaments and ended up issuing rubber checks in all three. In addition, Peppard was sued for $10,000 in unpaid bills by the Hyatt Regency O'Hare Hotel after the May tournament. Peppard was able to pay off most of the winners within a few months, but the bounced checks were only a symptom of a larger issue. Tourament Soccer went from building 1,500 tables a month to 150 in two months. In May of 1981 Jim Wiswell, one of the game's top players, committed suicide and to many it seemed that the game had died with him.
The situation looked grim until Atari president Joe Robbins approached Peppard in early 1981 with an idea for a video game tournament. Robbins gave Peppard a $40,000 advance and, according to Peppard, a verbal agreement to finance the venture. Peppard saw it as a golden opportunity to bring foosball back to respectability. In addition to the money from Atari, Peppard had secured $20,000 guarantees from Sutra, U.S. Billiards, and Arachnid.  Even two months before the tournament, however, he realized that he was in trouble but was confident that he could fall back on the entry fees for the Centipede tournament to bail him out. Then Atari backed out  of their commitment, concerned that Peppard wanted to make the tournament HIS tournament. Peppard, on the other hand, felt that Atari had placed him in a compromising position by announcing their association with TGI in industry journals. A contract was quickly renegotiated (for, Peppard claimed, $100,000 instead of the $240,000 originally agreed upon), with acrimony on both sides. More financing problems followed in the weeks leading up to the event, but Peppard was still hopeful that he could recoup his losses - until he saw the turnout.
Some expected upwards of 3,000 - perhaps as many as 10,000 to 15,000 contestants to show up and were shocked when only 174 did so (and only 138 for the Centipede tournament).. Panicked might be a better word since TGI  was relying on the contestant entry fees to provide funding for the prize pool. Part of the problem may have that contestants had to pay for their own transportation and lodgings, as well as a $60 entry fee (unless they could find a sponsor). Then again, the poor turnout may have been an early sign of things to come in the video game industry. The Centipede tournament itself was poorly run, to put it kindly. Players had to pay an additional $1 officiating fee to enter the Chicago Expocenter, where 280 Centipede machines awaited. Many of the contestants had no idea that Centipede would be the only game in the tournament (some had come to compete in Asteroids or other Atari games and rarely, if ever, played Centipede). Atari, however, had earlier announced (to operators at least) that Centipede would be the game used in the finals. While they initially claimed that the game used in the finals would be selected from a group of games used in qualifying tournaments (including Asteroids, Asteroids Deluxe, Battlezone, Warlords, and Red Baron), the summer 1981 issue of Atari Coin Connection included an update that Centipede had been chosen for the final round.
The confusion in Chicago didn't end thereTo qualify for the next day's double-elimination round players had to post a high score on any of the machines (which were set to a three-minute time limit - a fact that wasn't specified when the tournament was advertised), entering the initials they had been given. They could play as many games as they wanted within the "allotted time" but no one specified how much time was allotted. On top of that, players had to pony up their own quarters to play. Two hours after starting the players were told that they all qualified for the double-elimination round - their scores were irrelevant.  When Peppard was collared by some angry players and their parents, he explained that some players were entering initials other than their own (the "officials" hired by the tournament had failed to police the tournament - or do much of anything else). Peppard promised to meet with players the next morning then excused himself to go to a cocktail party. Somehow, the tournament managed to finish with Eric Ginner the overall winner and Ok-Soo Han the female champion.

Things went from bad to worse when Ginner’s $12,000 check and Han’s $4,000 check both bounced as did foosball champion Johnny Lott's (whose first-prize car also failed to materialize). Peppard was also unable to pay the $20,000 he owed to the site hotel. He was able to stave off some of his other creditors. Before the tournament had started, he was already deeply in debt to Sutra, U.S. Billiards and Arachnid, but they had extended him generous terms of credit and were "willing" to wait for their money (though "forced' might be a better word since Peppard would likely have gone bankrupt had they pressed him for payment). Peppard ended up not having to pay Video Concepts, a retail chain that had agreed to provide many of the prizes because they heard about the tournament's collapse before delivering any goods.
In the wake of the disaster, accusations flew back and forth between the principals. At one point, Peppard claimed that he expected to lose money on the tournament (as he had in earlier tournaments) since the purpose was to promote the games. Peppard also claimed that he was expecting the three $20,000 guarantees from the various manufacturers. When Play Meter talked to two of them, however, they said that they'd never promised Peppard anything. Peppard put much of the blame on Atari. He said that they had given him a $40,000 purchase order to cover decorating costs (one of the few bills Peppard actually paid on time). Atari's Frank Ballouz, on the other hand, said that Peppard had refused the order and had been told to "rip it up". Another bone of contention was that Peppard believed that Atari still owned him the final $20,000 on the $100,000 called for in the contract. Atari had actually sent him the final $20,000 payment three weeks before the tournament but Peppard was apparently convinced himself that this was confidence money, since he was expecting Atari's final payment to come in the form of 184 blank checks to cover the prize money. Finally, Peppard claimed that Atari had agreed to help him sell a projected 5,000 tournament kits at $5 each. Peppard only sold 600 due, he said, to the fact that Atari failed to help market them (Ballouz said that marketing the kits was entirely Peppard's responsibility).

Whether they were at fault or not, many disgruntled contestants blamed Atari for the fiasco (posters for the event gave the impression that Atari was the cosponsor. Atari claims it never approved them) Lott even threatened a class-action lawsuit. In the end, Atari ended up footing the bill themselves while suing TGI for breach of contract. The Illinois Attorney General launched an investigation, TGI went bankrupt, and Peppard lost his home. Perhaps the biggest casualty of the tournament, however, was foosball, which quickly faded back into obscurity.

Major sources for this post include the Febraury, 1975 issue of Replay (an issue dedicated to table soccer, including an interview with Lee Peppard), two long articles on the 1981 touranment in Play Meter (January and February 1982), and the documentary Foos.

[1] Microsoft Arcade, p.111
[2] Posters for the event gave the impression that Atari would be co-sponsoring the event, but Atari claims it never approved the posters

First another un-TAFA'd game. Electrocoin's Minesweep, released around February of 1977. 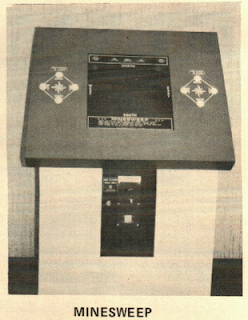 Here's a picture of the Midway production line churning out Sea Wolf from the November 1976 issue of Play Meter (though the picture had appeared in an earlier issue). 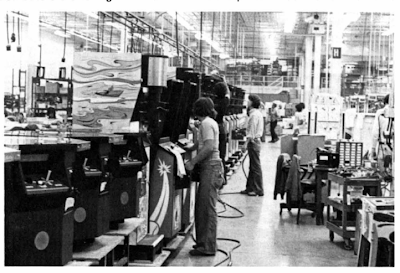 The same issue reports that Midway produced 8,600 units of Gun Fight and 7,000 of Winner. Given the scarcity of non-Atari production numbers, I thought I'd post the info.
.
The December issue also had an interesting piece of info. In a report on Night Driver/Night Racer/Midnite Racer at the 1976 AMOA show Play Meter mentioned that the games were copies of a German driving game that had appeared at the IMA show in spring. So it looks like Nurburgring wasn't as unkown as I thought it was.
Posted by Keith Smith at 8:07 PM