I wanted to post a pair of photos from the December, 1978 issue of Vending Times.

First is a photo of Larry Rosenthal in front of his game Scramble at the 1978 AMOA show (held November 10-12 that year).
For those who don't know, Rosenthal created Space Wars, which put Cinematronics on the map. It was introduced at the 1977 AMOA show, sold at least 10,000 units (big numbers for those days), and was named the top money maker of 1978 by Replay. Rosenthal left Cinematronics in late 1978 and formed Vectorbeam, who produced their own version of Space Wars called Space War..Scramble was supposedly their first original game. About 10 years or so ago Scramble was one of the holiest of holy grails but a bit more information has since surfaced about it. 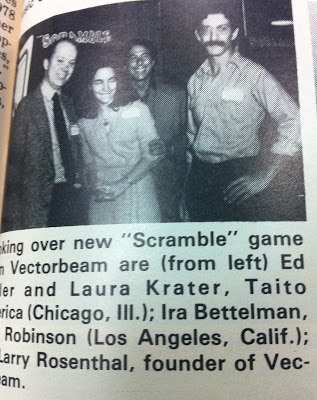 Here's another picture of Rosenthal and programmer Dan Sunday from the same issue: 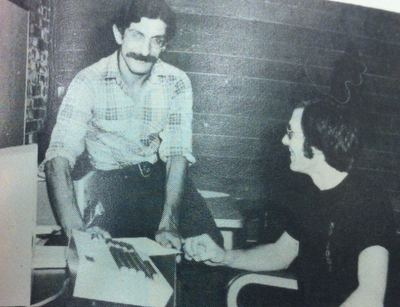 Finally, here is the section of my book dealing with the game (I probably need to update it):


Vectorbeam’s first original release was another game Rosenthal had created (along with Dan Sunday) called Scramble.

[Dan Sunday] [Scramble] was the very first game the new Vectorbeam company made. Remember, Vectorbeam only existed for 1 year: I recall Sept 1978 to Aug 1979, but may be off a month either way. So when it first started things were really hectic -- a scramble. We were trying to get everything off the ground, and get a game to a big annual trade show in Chicago. We managed to quickly put together a video pinball game, Scramble, and actually took it to the Chicago trade show[1].


The game was shown at the 1978 AMOA[2] and over the years, it has been become a much-storied collector’s item as no copy has ever turned up (though some boards were found in 2008 that may have been from the game). Some have speculated that the game was never actually released, but at least two units were on display at the AMOA show. Gameplay, was reportedly extremely crude. Tim Skelly, who played the game on a visit to Vectorbeam, describes it as a video version of pinball. Rosenthal, who barely remembers the game himself, vaguely recalls that they shipped 65 units to an overseas distributor and probably didn’t release it in the U.S. at all (a recollection supported by the fact that a German flyer exists for the game).
﻿


[1] Email from Dan Sunday to Chuck Zonn, October 1998. Posted at www.arlo.net/vectorlist/.
[2] The company was supposed to show a second new game at the show, but it is not known if they did
Posted by Keith Smith at 10:08 PM