The Ultimate (So Far) History of Cinematronics/Vectorbeam - Pt. 11

With World Series Cinematronics had finally found a winner and was seemingly (yet again) on the road to financial recovery. Yet again, it was not to be so.  In May of 1986 Cinematronics released another sports game as a follow-up to World Series. The idea had come not from the designers but from a company sales rep.
[Dana Christianson] …we had a meeting at Jim Pierce's house to talk about what kind of games we were going to do in the future…the thing that a lot of us wanted to do was a skateboarding game…and I remember sitting in a meeting with a sales guy - sitting in JP's office and he said "You know, I don't think u guys have your finger on the pulse of what the player's want"


Instead of skateboarding, the sale rep wanted them to do a video version of that hippest of sports - bowling.  Like World Series, Alley Master allowed the player to store their stats from game to game. 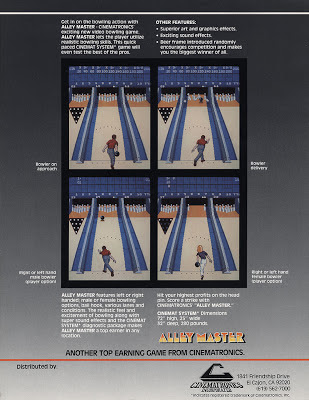 [David Dentt] - Alley master….[was at one time] called Up your Alley. A name I came up with. I liked the multiple interpretations of it. The game also had the data chips that World Series had. When we took the early version of this game to the Chicago show, we had a special chip we could stick in the slot during attract mode, and it would make the sounds of a turkey gobble


The gobble sound made it into the final version of the game when the player scores three consecutive strikes (known as a "turkey" in bowling parlance). While the game did appear briefly on Replay's popularity charts it only peaked at #20 - a far cry from the success of World Series 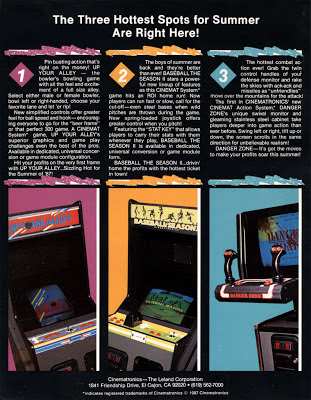 Danger Zone fared a bit better. A shooting game in which the player manned a gun to defend a desert base from incoming missiles, helicopters, fighters, and other enemies the game feature a cabinet in which the entire top half swiveled with the screen scrolling in response.


[Dan Viescas] . Jim Pierce wanted a shooting game were the player could move the gun like you would in a gun ship. Jim came to me and asked me to design the cabinet so I did. It won Video Game Cabinet design of the year in Replay magazine.


As with World Series, Danger Zone was an "all-hands-on-deck" effort with most of the programmers, engineers, and artists pitching in. The game just barely made it into Replay's top ten, though it did top the new game charts twice, indicating that it probably wasn't widely distributed. The game did appear in an exhibit at the Smithsonian.


Redline Racer continued Cinematronics string of sports games. A multi-player racing game with 16 different tracks, the game never really caught fire in the arcades. More significantly it served as the basis for a later car racing hit - Ivan Stewart's Super Off-road. Leading the design effort was newcomer John Morgan, who'd arrived at Cinematronics after working at Taito America, where he'd designed Zookeeper. Morgan reportedly had an ego but also the ability to back it up. He drew some resentment by finagling a then outrageous (at least for Cinematronics) $40,000 salary. Morgan would go on to design the company's Cinemat II system.


One game that may never have made it into full production was  Info-Mania/Reflex - an attempt to enter the countertop game market. 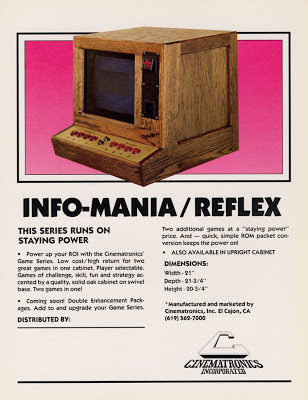 [David Dentt] …at some point it was decided that we should do a bar top trivia game. So we came up with Info-Mania. When we were ready to go with it, someone in the Ivory Tower decided it should be a two-in-one game. So in a week I did a second game that was called Reflex. You pressed the buttons to match the ones indicated on the screen.


The idea for a trivia game had come from the same sales rep that suggested a bowling game.


[Dana Christianson]  He was some guy that you'd picture in some dive bar with red naugahyde booths, smoking cigarettes…he had a view of the operators of what he thought he could sell but he tot did not und the players…that was at the time when You Don't Know Jack was popular - he thought "Yeah, I can do that"...he may have come from selling horoscope and love meters at bars.


During the Cinemat years the design process had evolved somewhat from the days when a single programmer handled all the tasks. Teams generally included two programmers and two artists. Most of the programmers and designers loved their work..


[Phil Sorger] If you like working on really hard problems around the clock with brilliant people, you would have loved the work environment…We built a new game every 3 months or so. Seems incredible to me now, considering some games I've worked on have taken closer to 3 years…Needless to say, there was incredible freedom to innovate and create games that people would love to play, that would make lots of money.
There was almost an adversarial environment between teams, it was typical to have someone try to hack your account or game or terminal in some unexpected way, so it was a combination of defensive and retaliatory programming, in addition to the game development itself.


Working for a company in constant Chapter 11 had its challenges.


[Phil Sorger] Even with all the innovation, we still worked in a factory-like atmosphere. After writing code, it would not be uncommon for us to go "down on the floor" and help assemble the cabinets, stuff EPROMs (takes practice), align monitors, validate controls, wrench monitors, and box and band machine after machine. I liked doing that, knowing the machine would work when powered up, appreciating the liminal time between projects, working with the rest of the company (literally) who sometimes resented our crazy work hours and behavior.


In 1987, Cinematronics Chapter 11 issues would finally be solved, though not perhaps in a way that anyone expected. On March 30th, Cinematronics was purchased by Tradewest. Tradewest was headed Leland Cook (a Texas millionaire whose ever-present cowboy hat never failed to charm Japanese video game executives). Cook had gotten into the coin-op business in 1974 when he bought Cranford Vending and renamed it Master Vend. He later added a music and games route and, in 1982, an amusement sales division. The following year, Master Vend entered the distributing business. Master Vend started out distributing Konami and Interlogic games and soon became the biggest kit distributor in the state. Not bad for a company headquartered in Corsicana - a rural town of 25,000 best known for its fruitcake. Cook (along with his son Byron) did it by getting into conversion kits at a time when most distributors were reluctant to do so (making money on dedicated units was especially difficult for rural operators) Other lines carried by Master Vend included Capcom, Arachnid (electronic darts), Dynamo, and Romstar. Master Vend was the exclusive Texas distributor for Romstar and the relationship led to the formation of a new company. In February of 1986 Byron and Leland Cook, along with John Rowe of Romstar formed a manufacturing company in Corsicana called Tradewest. Tradewest's first offering was Alpha Mission, a kit licensed from Japan's SNK (Rowe had a relationship with SNK president E. Kawasaki). It was the next game, however, that put Tradewest on the coin-op video game map. In February of 1986, SNK sent Tradewest some boards for a new game called Ikari Warriors for testing. Tradewest agreed to license the game and John Rowe went to Japan for five days of negotiations. In the end, Tradewest decided to manufacture an upright version of the game (Dynamo actually built the games) and ended up with a #1 hit. The follow-up, Victory Road, was almost as successful.


Tradewest also had a relationship with Cinematronics (a relationship that had reportedly started when Leland Cook got a look at World Series) - having licensed Redline Racer in late 1986. At the ACME show in New Orleans in March of 1987, Leland Cook approached Jim Pierce about the possibility of purchasing Cinematronics and making it a wholly owned subsidiary of Tradewest. Reports that other companies were going to try to outbid Cook proved false and on March 30th the deal was struck and in just 45 minutes, Cinematronics - a company that had been part of coin-op history since 1975 was no more. Cinematronics became a subsidiary of Tradewest and was renamed The Leland Corporation (they originally wanted to call it Westron but the name was in use). After almost 4 1/2 years in Chapter 11, Cinematronics was finally out of bankruptcy. There were not, however,  out of hot water. Tradewest now had to deal with large lawsuits filed by Pioneer and ESR (in addition to creditors wanting to get paid). In addition they had to deal with Major League Baseball, who had contested Cinematronics' use of the phrase "World Series" in a video game. In response, Tradewest changed the name of the game from World Series: The Season to Baseball: The Season II (they made some minor changes, including adding errors and control of fielders and runners - though some sources seem to incidate that they renamed the game Baseball: The Season and that Baseball: The Season II was a different game).

Jim Pierce (along with Ken Anderson) stayed on during a transition period. John Rowe took over the day-to-day operations at Leland (Leland and Byron Cook remained in Corsicana) but the design staff remained basically the same. Among the games released by Leland were Quarterback (perhaps the first game with "micro transactions" that allowed a player to buy items and power-ups in exchange for quarters) Ivan Stewart's Super Off-road (an off-road racing game that had started out at a dune buggy game until a group of Leland's designers and artists encountered Ivan Stewart in a sushi restaurant), and Pig Out (one of Leland's only non-sports game - an idea from an accounting department employee who suggested doing a game based on the three little pigs).
Leland lasted into the 90s before being sold to WMS in 1994. Many of the designers went on to form Blue Sky Software. Others went into different fields completely. Byron Cook is currently a Texas state legislator. And Jim Pierce? He disappeared into the mists of video game history. Rumor has it he retired to the Pacific Northwest but if so, he hasn't been heard from since.
Posted by Keith Smith at 9:59 PM