1) What was the first arcade video game tournament - or at least the first national one?

2) Can you name the player who may have been the first arcade video game player to gain national attention? I'm not talking about an AP or UPI story that got picked up by local papers across the country. This guy was featured in a truly national medium.

As for question 1. I actually don't know the answer and no one else seems to either.
According to Walter Day, the first video game tournament ever was the Intergalactic Spacewar Olympics, which took place in Stanford University's Artificial Intelligence Lab on October 17, 1972. This was a computer game tournament, however, not an arcade game tournament.

Given the popularity of foosball and pool (and later Air Hockey) tournaments around the time Pong came out, it seems likely that there were arcade video game tournaments in 1973 but I haven't found a documented one.

Here's one I did find, from the December, 1974 issue of Vending Times: 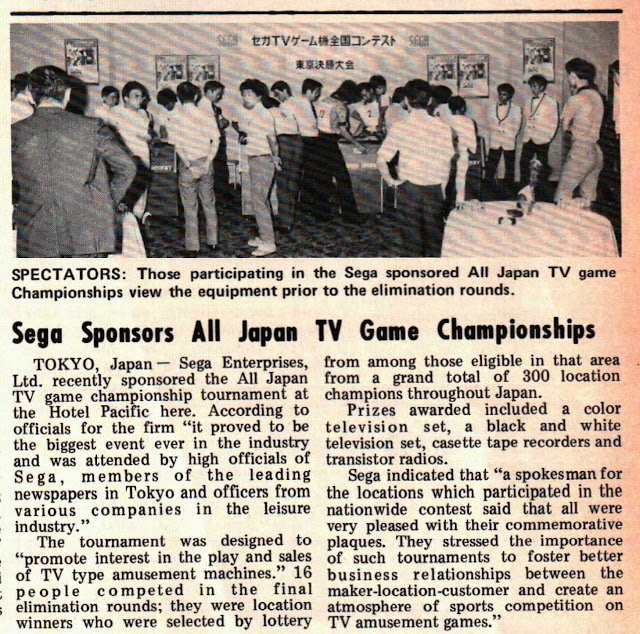 Could this be the very first arcade video game tournament? Probably not, but it might well be the first national one. It's actually not 100% clear from the article that this was an arcade, rather than a home game tournament but given that Sega sponsored it and it was reported in Vending Times, it seems likely that it was.

Another early attempt started in 1976. Millie McCarthy, president of the New York State Coin Machine Association had long wanted to create an International Coin Olympics that would include video games, pinball, foosball, and pool. On January 10, 1976 it seemed her dream was on the way to reality when a group of operators met in Atlanta to form the Games Tournament Board (though it seemed to concentrate mostly on pinball) . In 1978 McCarthy began to organize the first International Coin Olympics. Qualifying tournaments were to be held starting in November, continuing over an 18 month period with finals in New Orleans in February of 1980. A prize fund of $135,000 was announced, promotional kits, seminars, and films were created and the event was even announced in trade magazines, but it never came to be. The event was cancelled when pinball manufacturers started staging national tournaments of their own.


It wasn't an arcade tournament but the November, 1980 National Space Invaders Championship was one of the earliest and most influential national video game tournaments in the U.S.. Sponsored by Atari in conjunction with the release of its Atari 2600 Space Invaders cartridge, the tournament drew over 10,000 contestants. Regionals were held in Los Angeles, San Francisco, Fort Worth, Chicago, and New York with the five regional winners facing off on the home version of the game at Warner's New York headquarters. Bill (now Rebecca) Heineman of Los Angeles (who later co-founded Interplay) won the finals and a new Asteroids cocktail machine. Electronic Games said of the tournament "More than any other single tournament, the 'Space Invaders' Tournament established electronic arcading as a major hobby[1]."
Here's a photo from the New York regionals:

Well, this isn't the answer to the question, but this may be one of history's first forgotten gamers - Sabrina Osment. 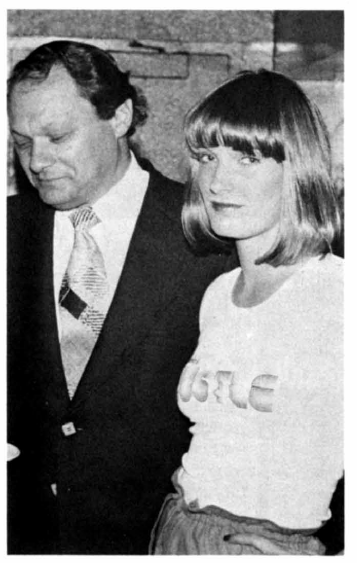 Back around April of 1977, Gremlin introduced their new game Hustle. To publicize the game, they launched a 12-city tour in which the "Gremlin Girls" (Sabrina Osment and Lynn Reid) took on all challengers in the game. Any player that could win 2 out of 3 games from the girls took home a crisp $100 bill. The results? The Gremlin Girls won 1,233 to 7. Yep, you read that right - 1,233 to 7. On Hustle. Color me cynical but something doesn't seem right here. I mean, it's Hustle people. Why kind of strategy could there be? Some of you are probably thiking that male players just threw the games to the ladies, but I can't believe that 99.9% of them would - espeically if they had to forego a hundred bucks to do so (and this was 1977).

Who was the arcade player who won national media attention for his skills.

Why Greg Davies of course.

On July 23, 1980 Greg Davies played Asteroids for 21 hours and 50 minutes on a single quarter at T's-N-Tilts arcade in Murray, Utah scoring 10 million points. The feat landed him a guest spot on the Nickelodeon talk show Livewire in July of 1981 (six months before Juraszek appeard in Time). Davies' fame was short-lived, however. When the Atari Coin Connection newsletter reported the score, they listed him as Shawn Davies. Five months earlier, in the May, 1980 issue Atari Coin Connection had reported a high score of a million on the game, noting that it was "…the highest score known". By the next issue they'd already received word of a score of over 7 million.

I said I wasn't counting AP or UPI stories, but if I did, another early player would be Randy Otto, who was featured in an AP story in August of 1981 for his Pac-Man high score.

So does anybody know more about these players or tournaments or about any earlier ones?

If Walter Day is reading this, maybe he has records of them in his voluminous arcades (unless he's tossed them out).