Recently, I was going through some of the Magnavox Vs. Activision documents that are available at the University of New Hampshire School of Law website (it looks like they were donated by Ralph Baer):

For those who don't know, Magnavox launched a number of patent infringement lawsuits beginning around 1974 against various companies (they were also sued themselves, I believe).

They also mentioned Ramtek's Hockey and Soccer and URL's Video Action III, so they may have sued them too. Consumer manufacturers named in the suits include Sears, APF Electronics, and Fairchild.

Most of the documents were rather boring but there were some gems in there (testimony by Willy Higinbotham, for instance - lists of which Activision games infringed on their patents and which didn't - Activision sales figures).

The info I found most interesting was a list of early computer games and other devices that were mentioned in the trial. One of the tactics tried by the companies in the suits was to claim that the Magnavox patents were invalid because there were earlier inventions that constituted "prior art" or invalidated the patents for other reasons.
All such attempts failed, but it appears that these games came up again and again.
Some of them are very well known to video/computer game historians.

Spacewar and Tennis For Two were brought up numerous times. They even trotted out the old MIT Bouncing Ball program (I don't think they were implying that this was a game. My guess is that they were offering as an example of a program with "coincidence detection".)


I don't think the old "Cathode Ray Tube Amusement Device" was on the list, though the patent was referenced. If not, this was probably because this patent was actually referenced in one (or more) of the Baer patents. One of the claims the various companies made was that Magnavox and/or Sanders was aware of these games at the time they applied for their patents but failed to mention it to the patent examiner.
There were a number of games, however, that I've never seen mentioned anywhere else and some sounded quite interesting.
Here is a list, with a few notes.


Michigan Pool Game (1954)
In 1954 William George Brown created a pool simulation at the University of Michigan. The program was demonstrated at the Association for Computing Machinery meeting in Detroit that same year. It was a two-player pool game with 15 balls and a cue ball that made use of a CRT.

In 1960, the US patent offices issued a pair of patents[1] for a military training similar developed for the German aircraft manufacturer Bolkow (they had been patented earlier in Germany). The device included a CRT and a pair of controls. The trainee used a joystick-like device to steer a guided missile that appeared on the screen towards a tank while avoiding flying the missile into the ground. A second controller allowed an instructor to move the tank or set up various training scenarios. The second of the two patents was issued to Fritz Spiegel, an employee of Messerschmitt (Bolkow merged with Messerschmitt in 1968). The defendants claim that the device was (or could be) connected to a standard television set. The patent was later sold to APF Electronics, who manufactured the 1977 Pong console TV Fun. Magnavox sued APF in 1977 (they learned of the Spiegel patent the same year) but the case was dismissed for lack of venue. In 1981, Magnavox acquired the Spiegel patent. In the Magnavox/Activision case, Magnavox acknowledged (or at least refused to deny) that the Spiegel patent constituted "prior art" in relation to the "507" Baer patent. While the device made use of a CRT (and apparently a raster-scan display), it was designed as a training device, so calling it the first video "game" would seem a bit ludicrous.

NOTE - Much of the above info was taken from Activision documents, so you may want to take it with a grain of salt. While it appears that Magnavox admitted that this constituted prior art, the court did not find that it invalidated their patents. I haven't really looked into the reason why, because that's not my primary interest.


Rand Corporation Handball/Jai Alai Game (ca 1963)
Unfortunately, no details on this one are provided in the available documents for the case.


GE/NASA Scene Generator (1964)
In 1964 NASA purchased a system from General Electric that simulated various docking and landing maneuvers. The program included numerous modules: a lunar landing simulation, a spaceship docking simulation, a "game" in which the player controlled and airplane (or helicopter) and fired bullets at a moving tank, an aircraft-carrier landing simulation, and an airport landing simulation.  The system used a color raster-scan display and made use of a joystick-like controller. It was designed by Jim Van Artsdalen, (possibly the same person who later worked on Origin's Ultima III and Ultima IV), James Lawrence, and James Smith. Like the Spiegel device, however, this appears to have been more of a training program than a video game.

John Drumheller graduated from MIT in 1964 with a bachelor's degree in mathematics. During his undergraduate years, he developed a number of programs for the PDP-1 in building 26, working alongside the hackers as they developed Spacewar. Among the programs he created was a Mill game (the Scandinavian equivalent of checkers) and a Go algorithm. After graduating, Drumheller went to work for Adams Associates. In 1966, Information Displays, Inc. of Armonk, New York approached Adams about developing a demonstration program for their monitors. Drumheller, who just two days earlier had started experimenting with a program that made balls bounce onscreen, volunteered to write a pool game. Written on a DDP-116, the game was shown at the Joint Computer Conference in San Francisco in the fall of 1966. Two players used a light pen to maneuver a cue stick and play a (somewhat) standard game of pool. The game included 15 balls, a crude form of English, and kept score automatically. In 1967, Drumheller's brother-in-law Peter Mullarky created a version of the game for another computer that used a vector display. From Drumheller's courtroom testimony it appears that the original version may have used a raster display, but this isn't clear. Drumheller also claims that he considered making a consumer version of the game that would run on a standard TV set. He also claims that he was later told that someone at MIT was developing a pool game at the same time he was.

NOTES - Drumheller's testimony is actually available on the site and makes for good reading. At least most of it does. A lot of time is spent discussing exactly how you hit the ball. Apparently, it was possible to hit the cue ball without actually moving the cue stick. The program just sensed where the light pen was and ignored the cue stick (though if you touched the cue stick, it moved). The court went to some length to note that this (ignoring the cue stick) was not the normal method of play.

My guess is that this was done because I believe that one of the patents covered having one object on the screen impart motion to another object and they wanted to show that this program did so (if the cue stick graphic didn't actually move, you could argue that it didn't). 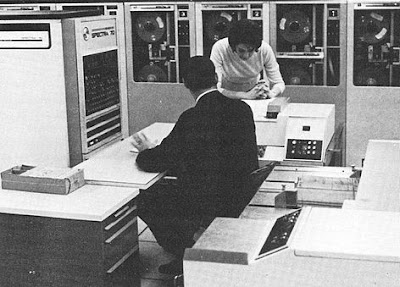 What is it with pool games? In 1967, RCA demonstrated a pool game on their Spectra 70 computer during an open house event celebrating the 25th anniversary of the David Sarnoff Research Center in Princeton. The BBC filmed the game, which was also the subject of an AP news story. The game was mentioned in the Magnavox cases and was referenced in one of the Ralph Baer patents from 1977.
NOTES - I am not sure that this was created for the Spectra 70. The text doesn't say for what system it was designed. But the Spectra 70 manual and a number of other Spectra 70 materials were entered as evidence, so I'm assuming it was.


CDC Baseball Game (ca 1967)
This game was briefly mentioned in documents for the Magnavox/Activision case but Activision doesn't seem to have done much research into the game and no other detail is given in the available case documents. They were likely talking about that various games that were developed for the CDC 6600 (which included games like baseball, Lunar Lander, and Spacewar). A baseball game called BAT was created for the system, but that may have been a different game. Announced in 1964 and released in 1966 with a price of $7 million, the CDC is considered by some the first "supercomputer". The baseball game may have been programmed by Thomas J. Spence (who is mentioned in the Magnavox/Activision documents in relation to the game).