What Was the First Cocktail Video Game (Redux)

Since then, I have gathered some more information and thought it was time for a follow-up.

So what was the first cocktail video game? I'm still looking into the matter, but here are the prime candidates I've identified so far: 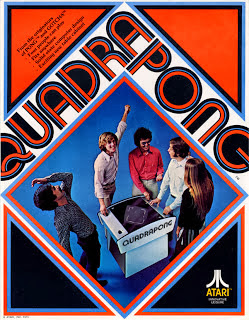 Atari's Quadrapong is probably the game I've most-often seen identified as the first cocktail video game (at least among those with some knowledge of the subject - I'm not counting articles like the one that said Space Invaders was the first video cocktail).

But when, exactly, was it released.

According to the well-known Atari internal document available on the web, Quadrapong was released in March, 1974. The game, however, may have actually been on the market a bit earlier than that. A flyer appeared in Vending Times in January, 1974. But flyers often appeared in trade magazines a month or two before a game's release. The trademark registration for the game lists a "first use in commerce" of March 4, 1974 and a "first use anywhere" of January 1, 1974.
Of course, none of this really matters because Quadrapong was really just Atari's version of Kee's Elimination. 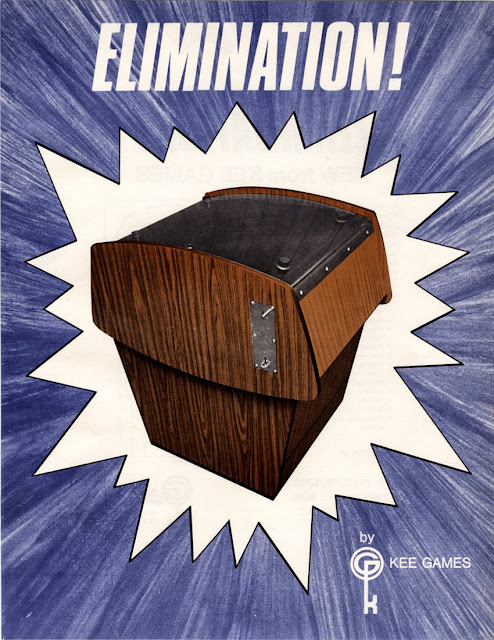 The Atari internal document lists Elimination as an October, 1973 release. I didn't find a trademark registration for Elimination under Atari or Kee, but I did find one for WCI Games, Inc. of Sunnvale filed 7/12/76. I'm guessing that "WCI" is Warner Communications, but am not sure. The registration gives a first use in commerce of 10/31/73 and a first use anywhere of 10/31/73. The October 6, 1973 issue of Cash Box announced that the game was (or would be, I don't have the actual issue, just my notes) sample shipping.

So, was Elimination the first cocktail video game?
Maybe not.

As I mentioned in my earlier post, I think there is some question as to whether it counts as a cocktail game at all given that it lacked the flat top where player's could put a drink and that seems to have been marketed at a game that you stood, rather than sat, to play and I think that the flat top and ability to sit while playing were almost defining characteristics of cocktail games.

Even if you do count it as a cocktail game, it may not have been the first.
Here are some other candidates:

According to an article in the April, 1975 issue of Play Meter (a key source of information on this whole question), Fascination Ltd. of Des Plaines, Illinois claimed it was the first to market a video cocktail table. 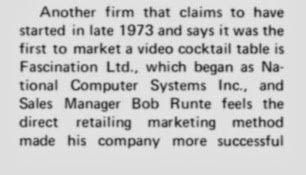 Is there any merit to this claim?
Fascination was founded in August, 1973 as National Computer Systems, Inc. by Bob Runte and Bob Anderson (in the latter's living room).
Runte actually did file a patent for a cocktail video cabinet. Two of them, in fact.

The first was filed on July 17, 1974 for an "Amusement Device":http://www.google.com/patents/US3940136?dq=ininventor:%22Robert+Ralph+Runte%22&hl=en&sa=X&ei=UXucUOThBOuD0QGx6IDwAg&ved=0CEAQ6AEwAw

The second was filed on July 29, 1974 for an "Amusement Game Table":http://www.google.com/patents/USD237727?dq=ininventor:%22Robert+Ralph+Runte%22&hl=en&sa=X&ei=UXucUOThBOuD0QGx6IDwAg&ved=0CDcQ6AEwAA 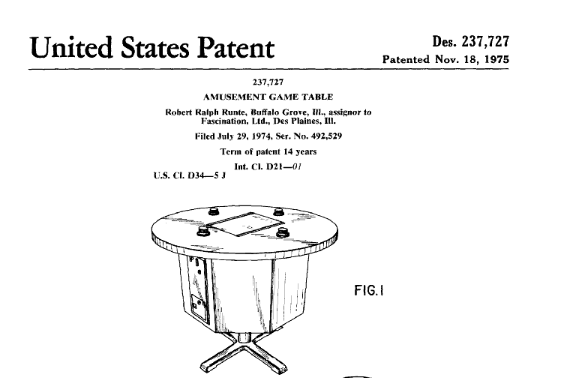 The patent was filed in June, 1974, long after Quadrapong debuted (though he could have filed another patent earlier). Of course, patents - especially in these early years of the video game industry - sometimes weren't filed until months after the game was released.
So was this the case here?

Yes, it appears it was. That same April, 1975 article includes the following: 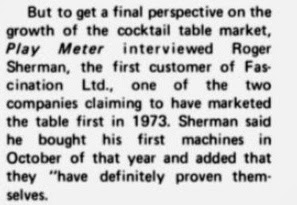 According to this article, then, Fascination Ltd. sold its first cocktail video game in October, 1973, the same month as Kee's Elimination. Which one came first? I don't know for sure (though if Elimination was sample shipping by the 6th, then it seems that it would have the better claim).

Of course, there are at least two other candidates.

One intriguing possibility is a cocktail video game made by Atari for National Entertainment.
Once again, we look at the April, 1975 article: 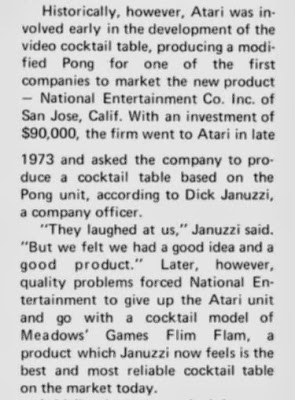 This story is backed up by Nolan Bushnell himself in an interview in the June-July 1975 issue of Play Meter.

[Nolan Bushnell] We tried to sell cocktail tables clear back when and we were singularly unsuccessful through our regular distributorship organization. It was just a thing no one was ready for. We ended up building and selling some in Tokyo as early as mid-1973. The operators over there were a bit more aggressive and did rather well with it. But we could get no interest whatsoever in the states. So, we were approached by National Entertainment and we said, "Sure, we’ll build you a cocktail table." 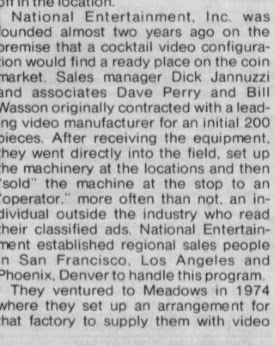 This appears to show a cocktail Pong game.
The flyer is not dated, but Pong Doubles came out in September, 1973.
Could this be the game Bushnell (and Hughes) was referring to?
Given Atari's relationship with Namco at the time, I can't imagine that they'd have licensed a game to another Japanese company.
I don't know if the game is the game Bushnell was talking about or not, but right now Atari's mid-1973 Japanese cocktail Pong (whenever it was released and by whom) is my leading candidate for first cocktail video game.

Another leading candidate for first cocktail game is Atari's Pong-in-a-Barrel (not to be confused with the Australian-released Barrel Pong). This was a standard Pong game with the monitor placed face-up in an actual barrel. 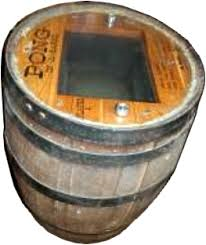 Supposedly, only about 20 were produced and it doesn't appear to have been widely advertised (if at all) so some might see it more as a prototype than an actual release. It was apparently designed to be played sitting down, but given the height of the barrel and position of the monitor (which, in existing photos, appears to be at the bottom of the barrel), there is some question about this. There is also some question as to exactly when it was released. Nolan Bushnell reports that it was made early in Pong's production run, but exactly when is unclear. It was likely made in the first half of 1973.
Finally, I should mention a few games that I consider non-contenders.
TAFA lists Nutting's Table Tennis cocktail as a 1973 game, but this is almost surely incorrect (they similarly list Computer Space Ball as a 1972 game, while trade magazines don't mention it until mid-1973). The release of Table Tennis was announced in the June 1, 1974 issue of Cash Box and the game was not listed in their 1973 catalog issue, which listed the games released in the previous year (it WAS listed in the 1974 catalog).
I interviewed Andre Dubel, founder of Elcon Industries and he said that as far as he knew, Elcon was the first company to release a cocktail video game (he said he came up with the idea and had never seen it in a video game before). Unfortunately, I am unable to confirm this story and the evidence I have indicates that Elcon didn't start making video games until well after 1973 (the first reference I've found to Elcon is an announcement for their cocktail conversion kit in the June-July, 1975 issue of Play Meter.
Posted by Keith Smith at 12:28 AM