The Ultimate (So Far) History of Allied Leisure/Centuri - Part 8

Today’s post is part 8 of my ongoing history of Allied Leisure/Centuri. It mostly covers Tunnel Hunt and as such is basically a repeat of a post I did earlier. Sorry for that, but I couldn’t leave the game out of my history. 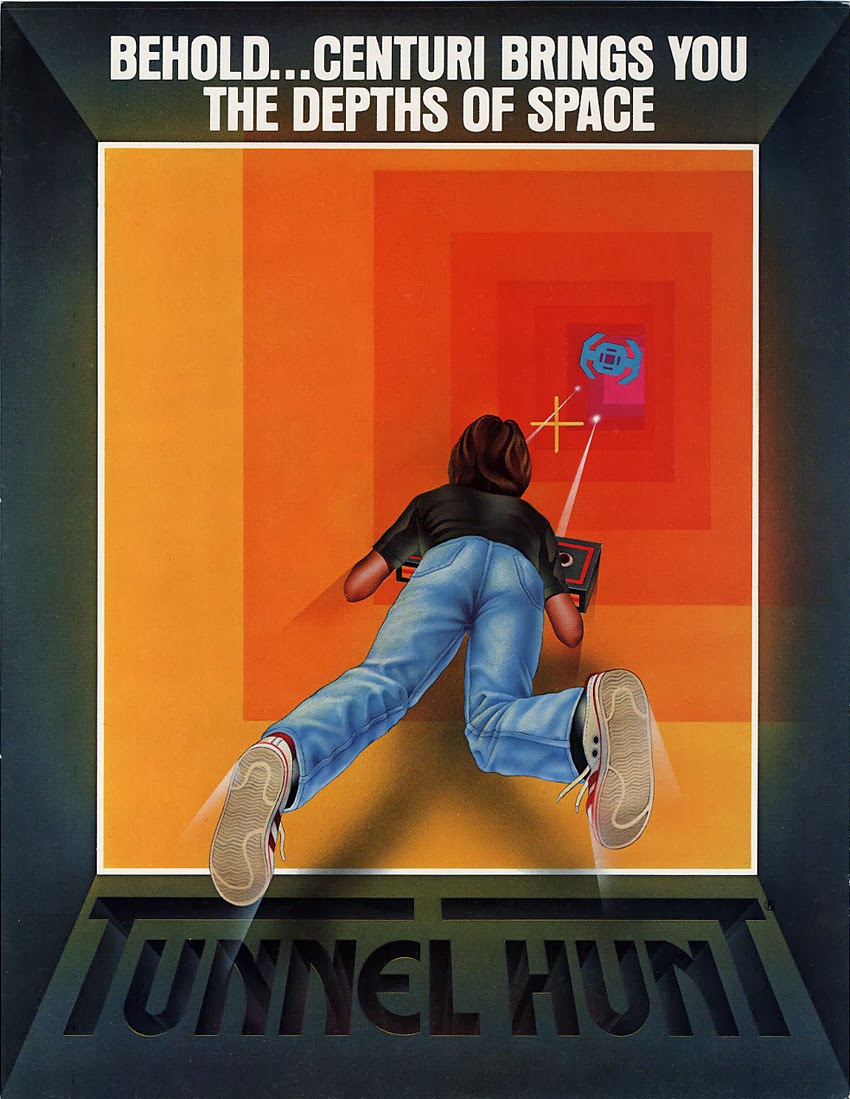 While The Pit had a convoluted history, it was nothing compared to July’s Tunnel Hunt. The game, which was actually designed by Atari’s Owen Rubin, started life at Atari as Tube Chase and was Rubin’s first color vector project. Initially he started with an Asteroids vector system and used some Night Driver code to create a simple flying game.

[Owen Rubin] I started the game as a vector graphics project based on the opening landing sequence in the movie Aliens. It did not work in vector, but that took several months to discover. Dave Sherman had an ellipse generator that he thought would be good, so I spent nine months or so and did this great game of flying down tunnels. The tunnels split and merged and you occasionally exited into space where you could fly into one of several other tunnels (worm holes). . .The only way you could slow down was to hit the walls, but that raised the hull temperature. It was a good strategy to bump the wall to hold off a target so that you would not overtake it, especially if your lasers were out. . .  It had a great cabinet. It “wrapped” around you with speakers behind and in front. You stood, not sat, and it blocked out outside noise. The controller was a flight stick for flying with buttons for firing and shields.


The game was play-tested and was ranked a solid #2 or #3 for 10 weeks straight. Atari, however, would not feel comfortable releasing it unless it reached #1 and asked Rubin to make some changes. After Rubin spent another six months working on the game, management decided that it was too expensive. 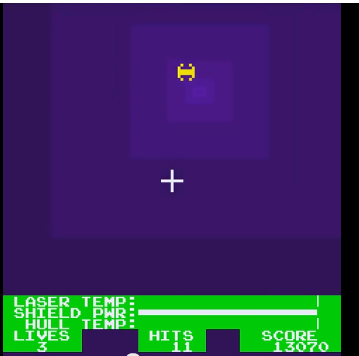 [Owen Rubin] So we cheapened the hardware to do circles only. This made the split tubes ugly, and the warping of the tunnel effect was lost... It took another four months to make the changes. We field tested it again – #2, solid! They changed the hardware again to make it even cheaper, which allowed only one sorted list of circles and so I had to take out the splits. The game was MUCH simpler now, but still the same basic game play.  [It was] still too expensive, so Dave [Shepperd] did a rectangle generator and I rewrote the game for a square tube. After 3-4 months [we did] another field test – still #2 for another five weeks (at different arcades all the time as well). So after almost two years of screwing around with it, they decided to sell the game to a competitor – something Atari had NEVER done. So, I stated another turn to change the name to Vertigo for Exidy. This was harder than it sounds because I put some VERY elaborate security code in the game to prevent a clone company from being able to copy the game and remove the word Atari from the screen. After all this time, I forgot where it all was. Another three months and they had their game. They field tested it again, but now it was only earning a solid #3. After all, it was OVER two years old and starting to look out of date.

In Exidy’s version, the game was packed into a cockpit cabinet. After building a small test run, however, Exidy decided it didn’t want the game after all (though they did go on to develop another, unrelated, game. In a cockpit cabinet bearing the same name).


[Owen Rubin] About three months later, they rolled the game back into my lab and asked if I could make “just one more change”. This line became a joke because they’d asked this maybe 70 times by now. I changed it AGAIN, this time for Centuri in Florida, and they did build the game. Unfortunately it was now almost three years out of date…The kicker to all this is that after I left Atari, I went immediately to Bally/Sente to work with some old teammates from Atari. When I walked into my new law, there was a Tunnel Hunt with a sign asking if I would make “just one more change”. Of course, they didn’t really want it, but I got a VERY good laugh out of it.

While Centuri did release Tunnel Hunt, it was even less successful than The Pit and netted Centuri just $1.15 million in sales (probably less than 1,000 copies). Centuri’s final release of 1982, September’s The Swimmer (licensed from Tehkan), didn’t do much better, netting the company just $1.49 million (though it might have made more money in 1983). 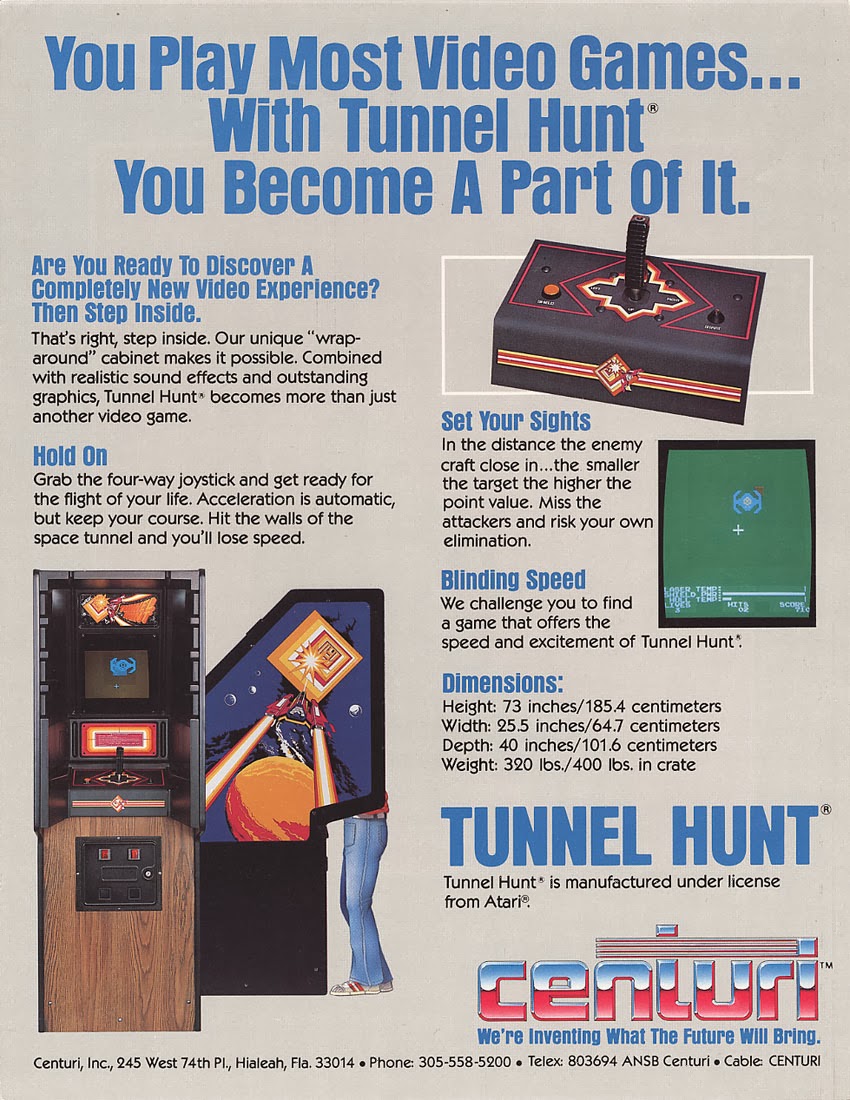 
After their “annus mirabilis” of 1981, Centuri failed to reproduce its success in 1982. In fact, they didn’t even come close. Centuri’s revenues for fiscal year 1982 (which ended October 31) fell from $61.5 million to $37.6 million and the company lost $2.9 million. It was déjà vu all over again. Centuri sold just 8,682 video games during the year, resulting in $14.1 million in revenue, but losses from video games were $3.1 million, even greater than losses as a whole. Their biggest “hit”, The Pit, accounted for 21% of video game revenues. With arcade video games in decline, the company began to branch out into other areas. In February, they struck a licensing deal with Atari for home rights to Phoenix, Vanguard, and Challenger (the Phoenix license would be the basis for Atari’s November suit against Imagic over the Demon Attack cartridge). In May they sold $10 million of their convertible notes to a California life insurance company to raise some much-needed cash. The biggest move came In September, when Centuri acquired Outdoor Sports Headquarters Inc., a wholesale distributor of hunting, fishing, camping, marine, and archery equipment with four retail stores in Ohio and Indiana (though the stores accounted for less than 5% of Outdoor Sports’ revenue). In September and October alone, Outdoor Sports generated $20.9 million in revenue (more than video games had for the entire fiscal year) and turned a modest profit of $134,000. In the final two months of the calendar year, Centuri had revenues of $21.2 million and a profit of $72,000 with most of the total coming from Outdoor Sports.
In response to the decline in their video game business, Centuri also made a number of personnel changes in 1982. In the spring, Ed Miller resigned as president and formed his own company called Telko Properties, which worked with Miami’s Techstar (founded by former Centuri VP Bill Olliges) to secure licenses for their games. A short time later, Centuri brought in another coin-op veteran – Arnold Kaminkow – to replace him. In addition, Centuri laid off a number of workers in their Hialeah plant and shut down their development lab in Bensenville, IL. With the industry crash already underway, things were not looking good for Centuri’s video games, but 1983 would be much different from 1982.
Bonus Pictures
First, a few more undocumented games: 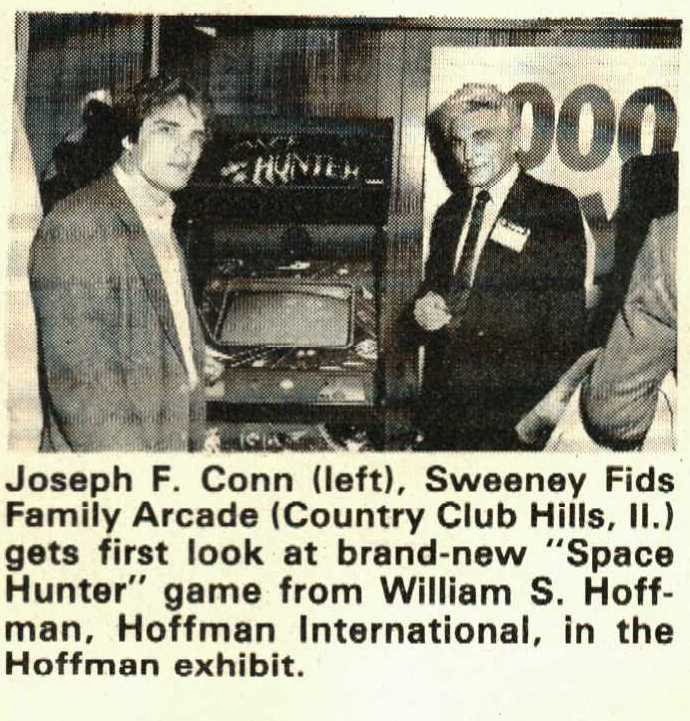 Above photo is from the 1982 AMOA show

The next one is not a photo, but it does confirm the existence of Shadco's Mister Doodle and Naughty (for which I posted an ad earlier). This one's from August, 1982

Anybody ever seen the following? Wonder if you could put a Moppet game in there?

This one's not a video game, but it's interesting anyway:

Finally, a little peek behind the scenes. Here's a Gremlin IC inserter from 1982: