What Were the First Ten Coin-Op Video Games?

Way back when I started this blog, one of the first articles I thought about writing was on the first ten coin-op video games to be released. Unfortunately, back then, I didn’t have enough information to write a definitive article, since the sources I had at the time were too late. Play Meter didn’t publish its first issue until December of 1974 and RePlay didn’t start until October, 1975. Cash Box and Vending Times were covering the coin-op industry in 1972 and 1973, but I didn’t have access to those issues. My library has a nice long run of Vending Times but it doesn’t start until February of 1974 and I didn’t have any access to Cash Box at all.


Since then, things have gotten better. I haven’t been able to look at the late 1972 and 1973 issues of Vending Times but I know someone who used to be an editor there and he was kind enough to make a trip to their New York offices and look through the issues for me. Then I found another library that had a run of Cash Box starting in July, 1973. The bad news was that it was 500 miles away in El Paso. On the other hand, El Paso was one of few Texas cities I hadn’t been to yet so I planned one of my annual road trips around El Paso and included a stop at UTEP to peruse their issues. I was also able to purchase a number of the earlier issues from E-Bay. More recently, I’ve been buying early issues of Marketplace, an industry newsletter published by Bill Gersh (who also published Cash Box (NOTE that Billboard had basically stopped covering the coin-op amusement industry – other than jukeboxes – by 1972).


Unfortunately (again), despite all the new info, I still don’t have the info I need to write a definitive article on the first ten coin-op video games. The sources that covered the coin-op industry in 1972 and 1973 just didn’t report video game releases nearly as frequently as they did in subsequent years, so I still don’t have good dates for many of the games.


Nonetheless, here is my stab at listing the first ten coin-op video games, based on the information I currently have. 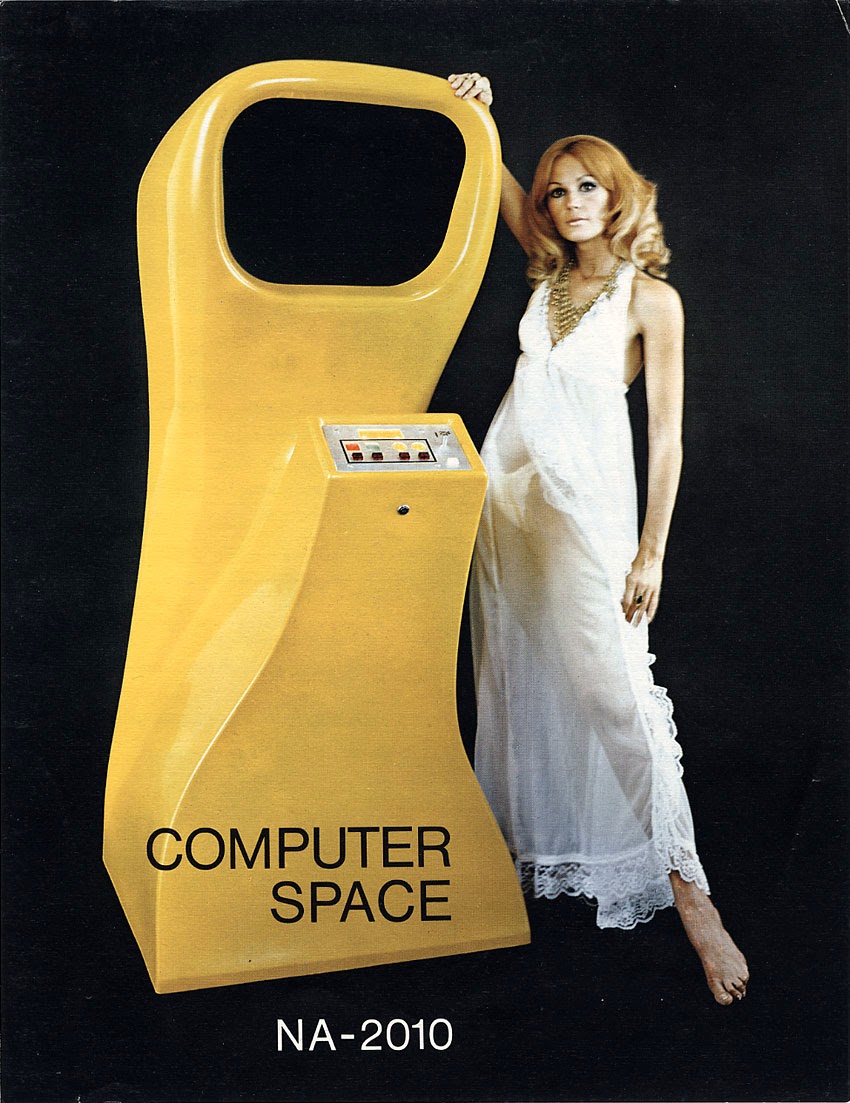 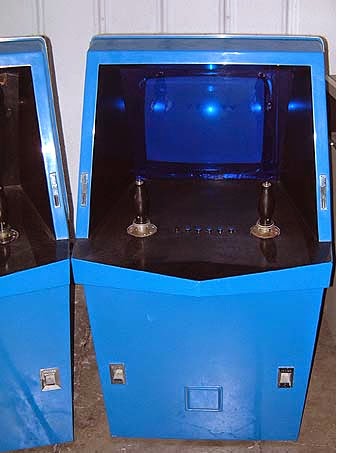 When comparing Computer Space and Galaxy Game, I think release dates are really a moot point. Galaxy Game was a one-of-a-kind game and wasn’t built by a manufacturer and thus never shipped to any distributors and was never really "released" at all. According to available sources, it was placed on location at the student union in Stanford in September, 1971, so that was when the general public first (at least those at Stanford) got to see it. This was also basically when the game was “field tested”. According to Goldberg and Vendel, Computer Space was first placed on location in August, 1971 at The Dutch Goose so in terms of when the public could actually drop a coin into an arcade video game, Computer Space appears to have been first and since Galaxy Game wasn’t really a released product, I think that this is the best criteria we can use to determine priority. (Of course, we could also ask which one started development first. Normally, this kind of info is rare for coin-op video games, but in this case the info available indicates that Computer Space was started long before Galaxy Game so by this criteria, Computer Space is still #1) 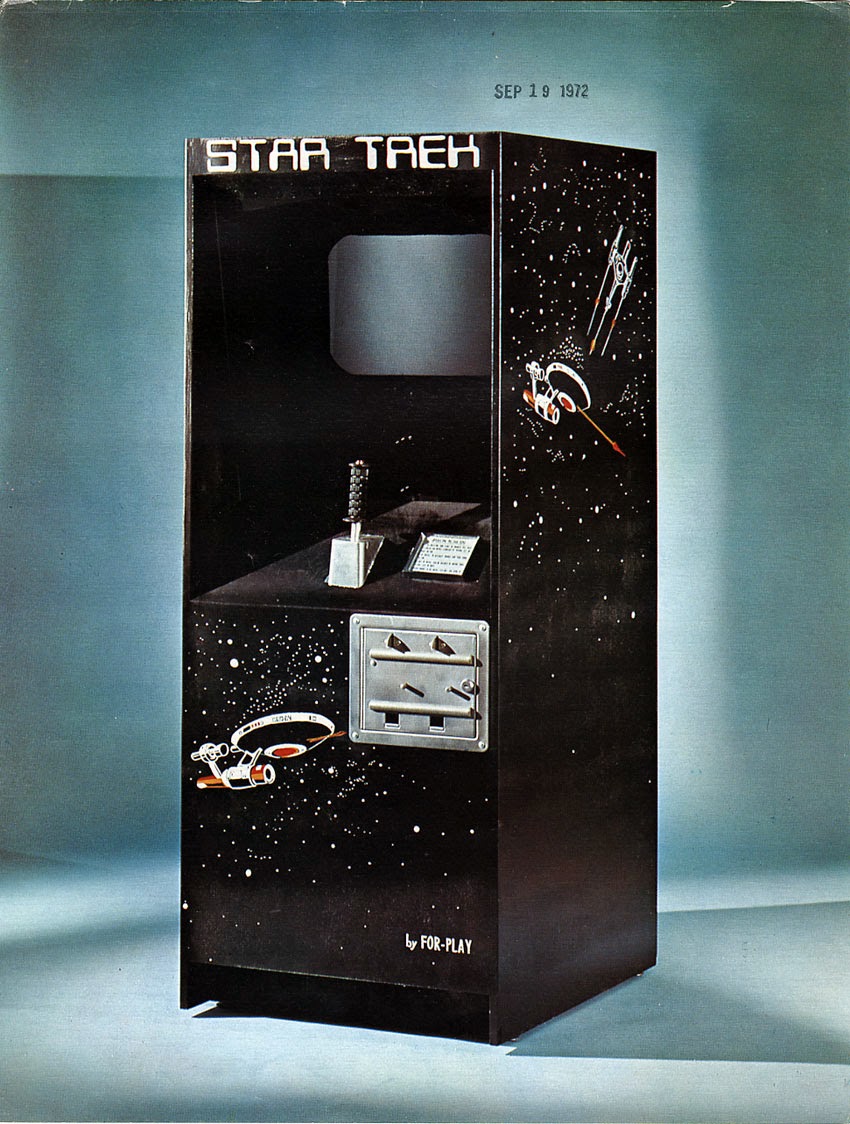 This one is really interesting. It was a clone of Computer Space, thus making it not only possibly the third coin-op video game ever made but the first bootleg game (Galaxy Game wasn’t a bootleg of Computer Space, though both were versions of the mainframe original). It was supposedly released in September of 1972 (or at least that what I have in my notes). I am not sure, however, exactly where I got that date and haven’t been able to track down its source since then. I have a vague memory that it came from one of Bill Kurtz’s books on arcade video games but that is only a vague memory and Kurtz isn’t the most reliable source. The game’s flyer on The Arcade Flyer Archive has a date stamped on it of “Sep 19 1972” but that doesn’t prove that it had been released by then (for one thing, flyers often came out a month or so before a game shipped and for another, someone could have stamped that date on there later).
OTOH, the company was incorporated on July 20, 1972 and according to RePlay/Play Meter it was formed specifically to get into the video game business. 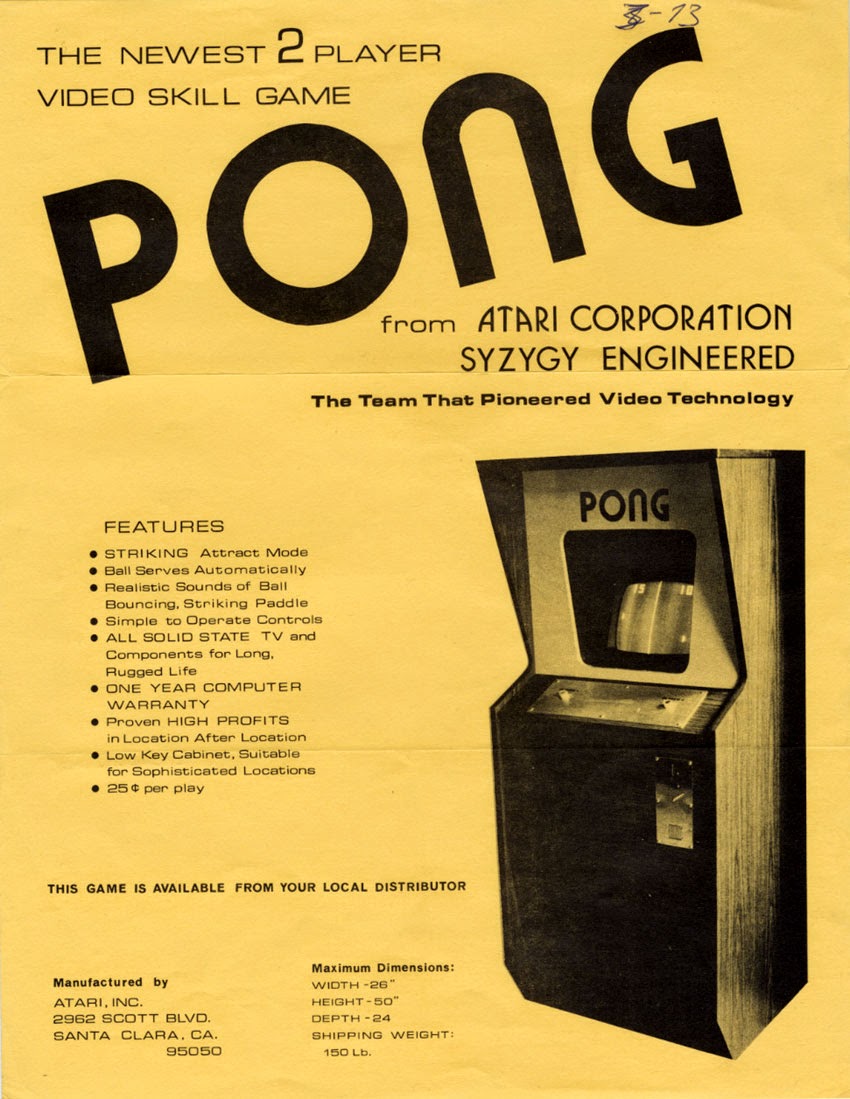 Not much to say about this one. The date comes from the well-known internal document that has been circulated about the web. I am not actually sure if the dates on said documents are “release” dates or not, but they seem to be (they could be the date the game went into production, but games generally went into production the same month they started shipping).

The date on this one is very uncertain and I have found few solid references. The June 16, 1973 issue of Cash Box mentioned that the game was "still going great guns", indicating that it had probably been out for at least a few months. A more intriguing mention came in an interview with Vic Leslie (chairman of England's Cherry group) in the August, 1976 issue of Play Meter. Discussing how he got into video games, Leslie noted:

"At the ATE in 1973, the London Exhibition, Rui [Lopes - Nutting VP] and I bumped into each other again. Actually, he approached me and said that he had a different type of game: would I be interested in marketing it in England?...I believe he shipped the machine, which was called Nutting Computer Space Ball but was Rui's version of Pong. Pong had just been invented a month or two prior to that and hadn't come to England at all at that time."

The ATE was usually (and, AFAIK, always) held in January - which fits in with Leslie's claim that Pong had been invented "a month or two prior to that". It is unclear if Computer Space Ball had already been released in the US at the time but, if so, it would have surely been the first Pong clone. 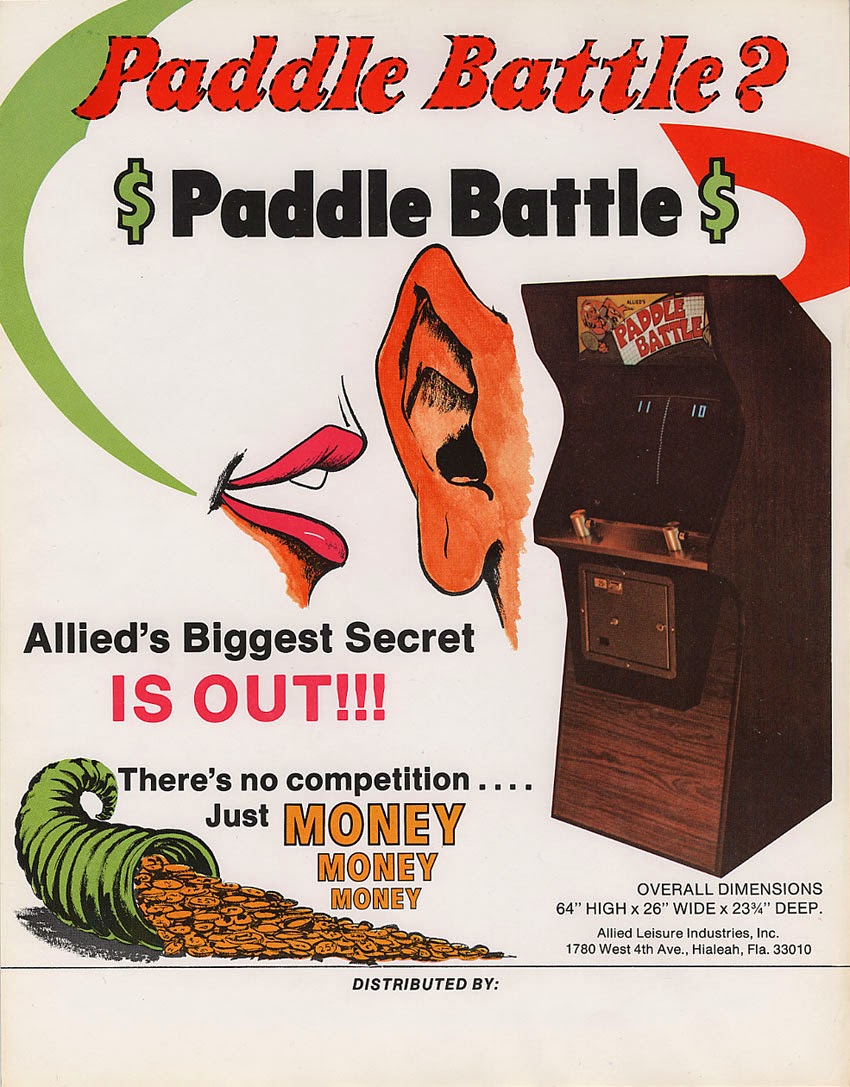 The date here is taken from Allied’s annual report. It is actually the date the game went into production but as I mentioned above, this is generally the same months as the release date. While it appears that at least two other games were released in March, 1973, I’m guessing that Allied Leisure was the first of them. Paddle Battle was probably the best-selling of all the early Pong games (yes, including the original) – though that is not certain. If so, its early release date was likely one big reason (see my Allied Leisure history for more info). 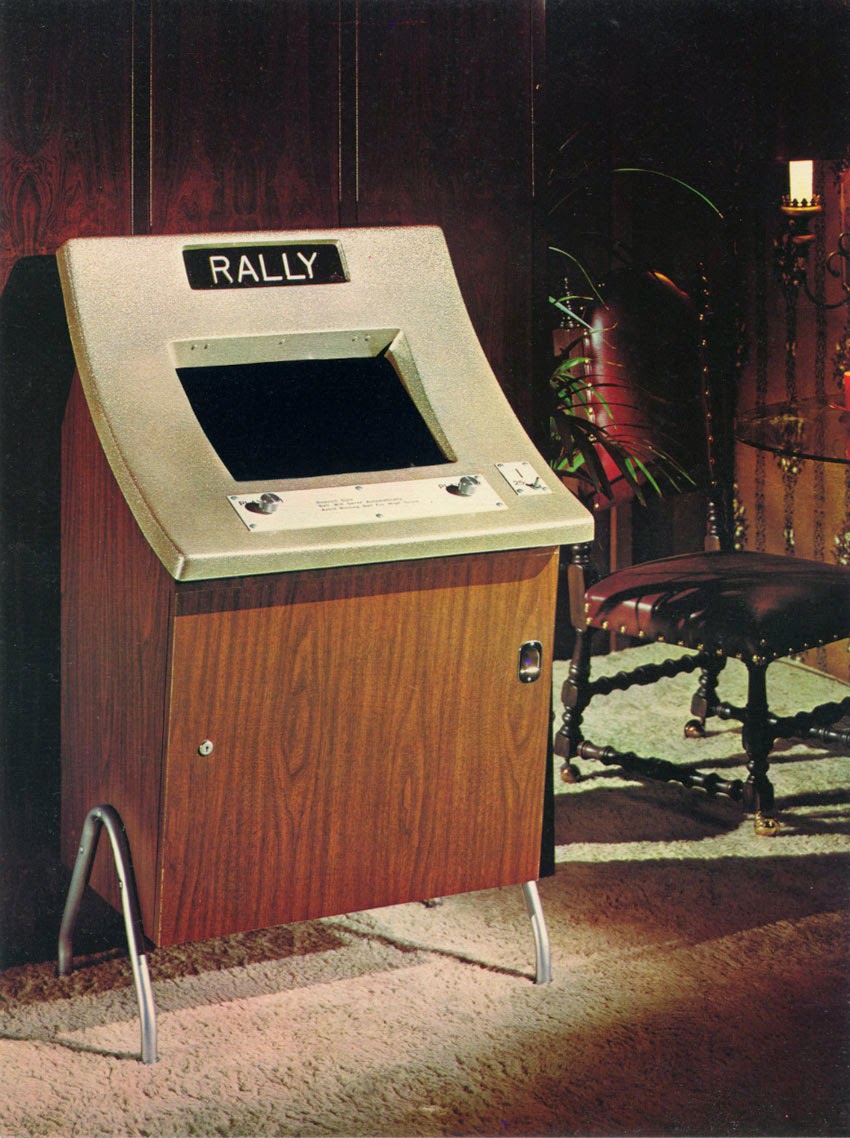 For-Play strikes again – and with another clone. Not sure exactly when it was released but the release was announced in the March 17, 1973 issue of Cash Box. Note that For-Play also released a one-player version of the game in June. Note too that For-Play’s games were also sold and distributed via a company called ACA. 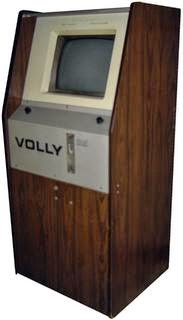 Like Allied Leisure, Ramtek had a leg up on the competition. In this case it was because one of the company execs had a financial interest in Andy Capp’s Tavern and got an early peak at Pong (supposedly the day after it went on test). Not sure of the exact date it was released but in an interview in the June/July, 1975 issue of Play Meter, Nolan Bushnell claimed it came out in “late March”. 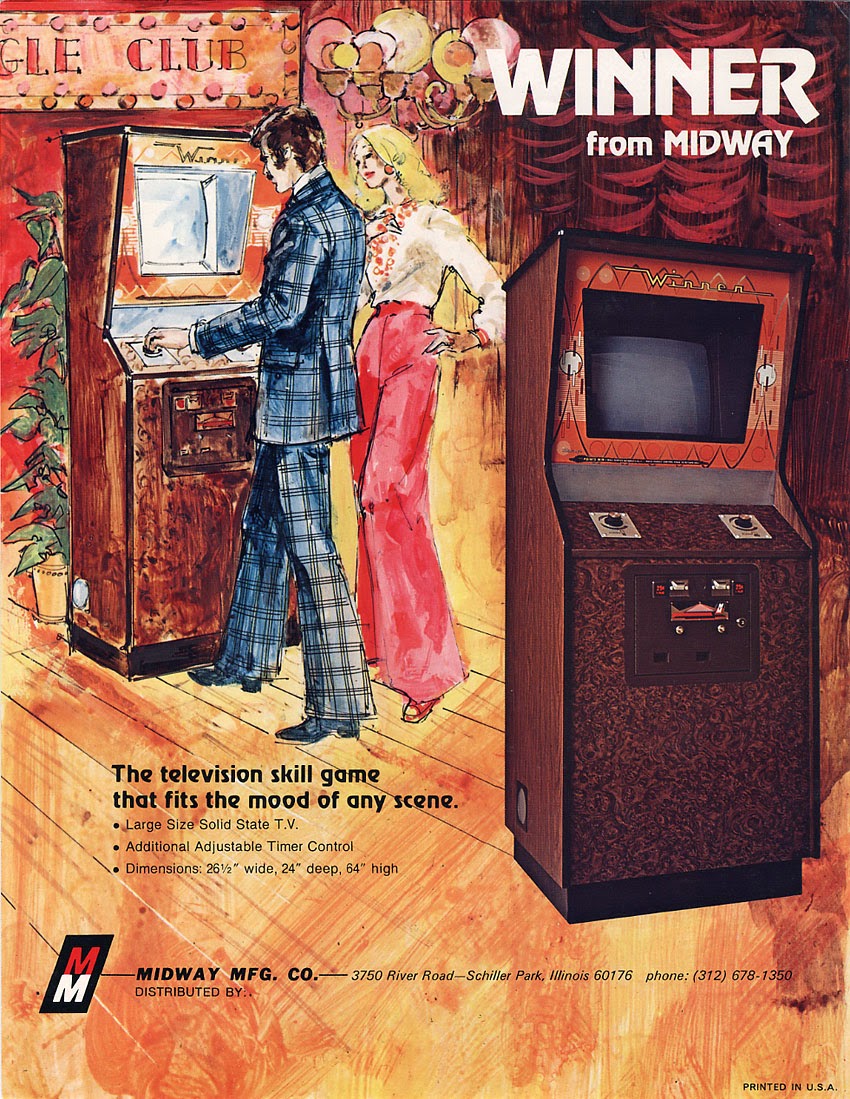 Unlike most Pong clones, Midway’s version was actually legit. In March, 1973 they actually licensed the game from Atari (according to some, it was one of three companies to do so) and released their version a short time later. There may have been other games released in April, but I haven’t been able to find any firm dates. 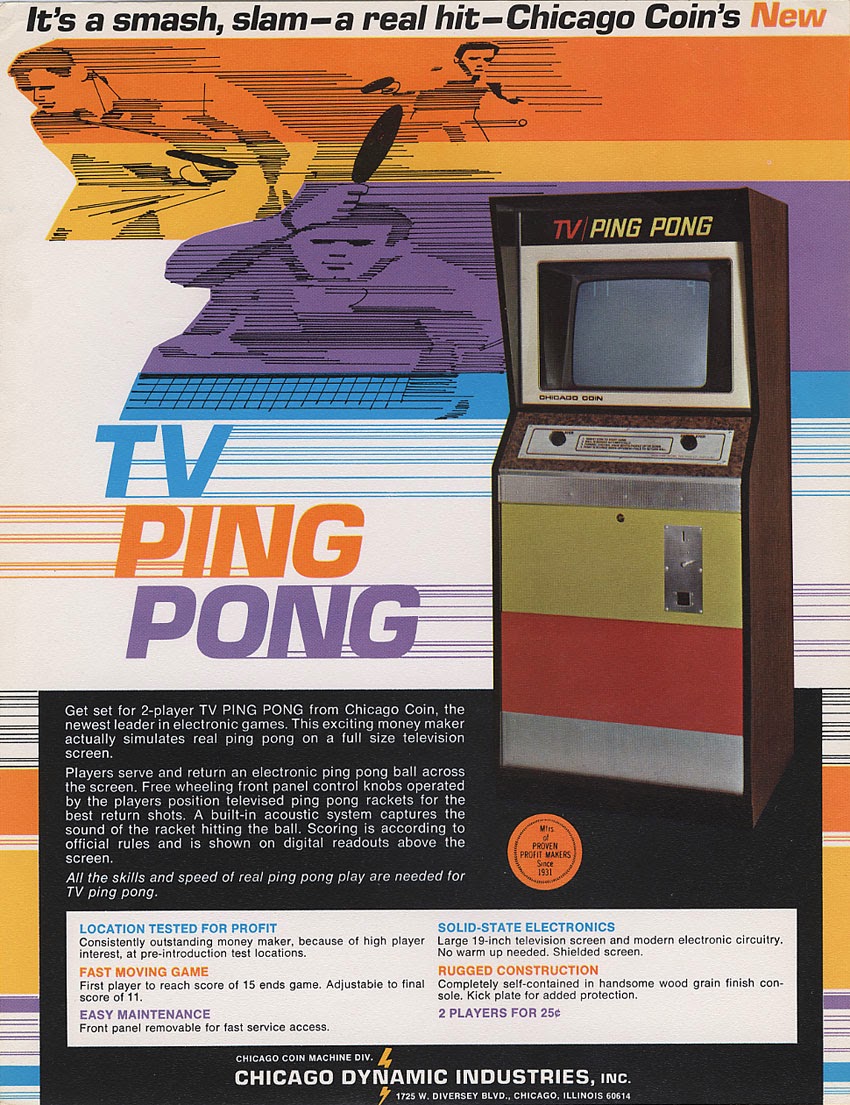 Not sure of the release dates on these. TV Ping Pong was shown to distributors on March 30, 1973 but I’m not sure when it was released. My notes say that the release of TV Tennis was announced in the April, 1973 issue of Vending Times, but it wasn’t announced in Cash Box until the October 27, 1973 issue so the earlier date may have been referring to TV Ping Pong. 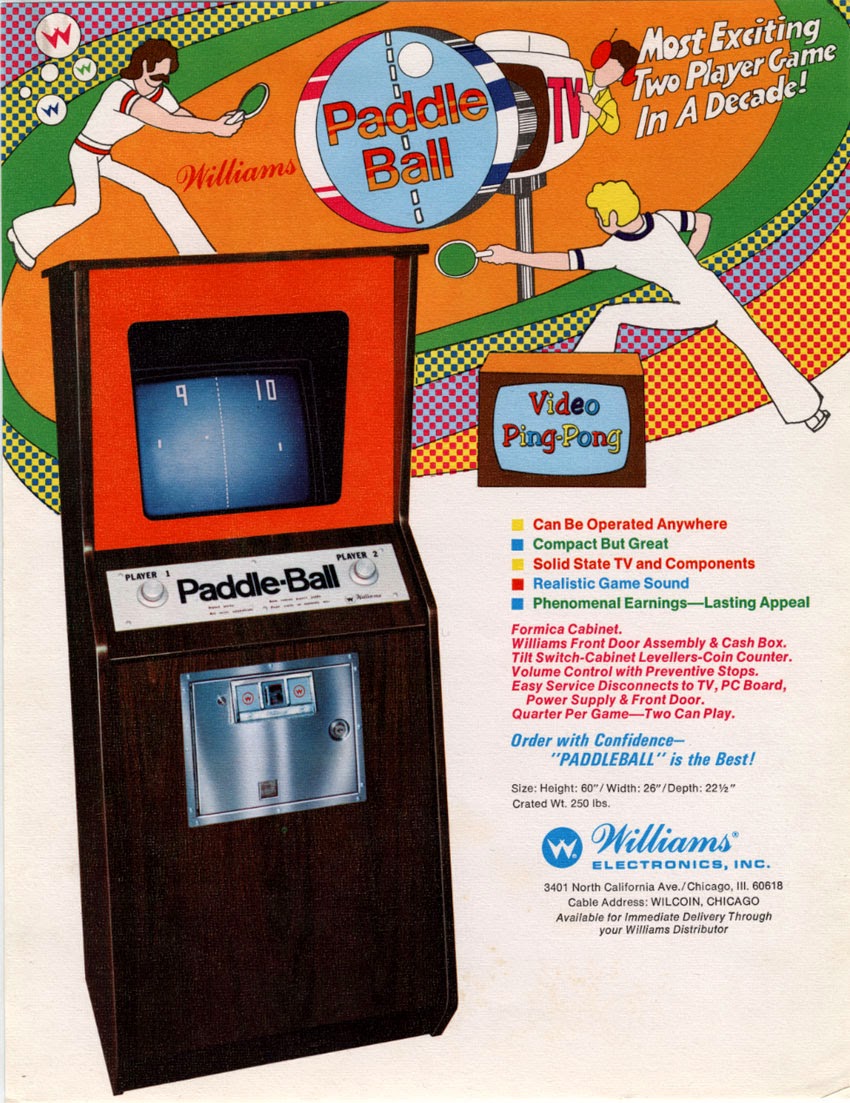 Once again, I’m not sure of the exact date, but the game’s release was announced in the May, 1973 issue of Vending Times. It was also mentioned in the April 14, 1973 issue of Cash Box (though it didn’t say it was released)


The “????” before the #10 and #11 games indicates how sketchy the information I have on games released after March, 1973 is (and really, even the earlier dates aren’t as nailed down as I’d like). It’s quite possible that some other company released a game before some of the games on this list. Here are some candidates (in order by manufacturer)


Amutronics – TV Ping Pong. This one appeared in the July 7, 1973 Cash Box catalog issue, meaning that it had been released sometime in the past year. It may have been released prior to some of the games on the list above.


Atari – Pong-in-a-Barrel?? Only about 20 units of this one were produced and I’m not sure exactly when (note, this game is not to be confused with Barrel Pong) as the game. Their next “officially” released game after Pong was Space Race in July, 1973.


BAC Electronics – Tele-Soccer. Shown at the 1973 MOA show (November 9-11). According to Ralph Baer they had another game called Tennis but I have found no other reference to it.


Nutting Associates – What was Nutting’s next game after Computer Space? Probably the 2-player version of the game, which was mentioned in the June 6, 1973 issue if Cash Box. If you don’t consider that a separate game, their next game was probably Computer Space Ball, which was mentioned in the same issue. TAFA lists this game as a 1972 release, but that is almost certainly wrong. Note that in Kent’s Ultimate History Steve Bristow is quoted as saying that Nolan Bushnell got a look at Missile Radar “before he started” Atari, but this also seems to be clearly wrong.


PMC Electronics – TV Table Tennis. This one also appeared in the July 7, 1973 Cash Box catalog issue (indicating it was released at some point during the preceding year).


Sega – Pong Tron. Release dates for early Japanese games are even harder to come by than U.S. games (at least for a non-Japanese researcher). Arcade-History.com lists this one as a July, 1973 release.


Taito – Elepong. This was Taito’s first video game but I have no release date info on it.


U.S. Billiards – TV Tennis. The first reference I found to this one was a flyer in the November, 1973 issue of Vending Times. Normally, I wouldn’t have included it but there is a slim possibility that it came out much earlier.


Volly Industries – Volly was (supposedly) an offshoot of Ramtek that released Ramtek games in Canada (usually under a different name). TAFA lists Hockey, Scoring, and Tennis as 1973 releases, as does the website on the company’s history (http://www.ccjvq.com/slydc/topic/volly/volly.htm)