Today's post is the first of three on a trio of events that followed in the wake of the famous Life magazine photo shoot in November of 1982 (if you're reading this blog, I suspect you know about that one). One of the events is very well known.
The other two aren't but, in my opinion, make for far more interesting stories.

The one you no doubt all remember is the 1983 North American Video Game Olympics  - considered by many the first national video game championship.Everybody remembers the finals on That's Incredible. The image of Ben Gold crossing the finish line isn't quite as iconic as the Life photo, but it isn't too far behind.

Not nearly as many, however, remember the qualifying event and even fewer probably remember that the even was not the first video game tournament shown on That's Incredible. But anyway, on with the article...


That's Incredible was an ABC reality television show in the tradition of Ripley's Believe It or Not and NBC's Real People that aired from 1980 to 1984. Most video game fans remember the video game competition that aired on the show in February of 1983 (see below) but few remember the Ms. Pac-Man championship that aired the year before. Sponsored by Six Flags amusement parks, qualifying rounds were held at six Six Flags locations around the nation in the summer of 1982. Thousands competed in the tournament with finalists from each of the six regions (at the Southeast Regional in Georgia in June, there were 44 finalists) receiving $500 and a four-day trip for two to Los Angeles to compete in the televised finals, which aired on October 11th. Tim Collum of Boyd, Texas (who had won the Texas Video Game Championship in June) won the competition with a score of 123,000.

Perhaps the most famous video game competition of the golden age came in the  January 1983 "North American Video Game Olympics" -  a contest that many consider the world's first national video game championship. Once again, That's Incredible was the driving force, though the main competition took place in Ottumwa. While they hadn't been credited, Walter Day and Twin Galaxies had been involved in the That's Incredible Ms. Pac-Man tournament, providing advice on how to run the competition. When the show proved to be a hit, producer Alan Landsburg decided to do another show related to video games and director Todd Simon made another call to Day looking for ideas. As he had with Life, Day suggested bringing top players to Twin Galaxies, this time for a five-game video game "pentathlon". Simon was skeptical but when he arrived in Ottumwa to scout the location, the just-released year-in-review issue of Life magazine and all doubt vanished (some sources claim that the competition was actually announced in the Life issue). The competition was scheduled for January 8-9, 1983 and Twin Galaxies was paid $1,100 for expenses. Excited by the prospect of their national television debut, the citizens of Ottumwa chipped in. The local Radio Shack supplied a Model III computer and a technician to help create a computerized scoring system (sadly, calls for a  marching band went unanswered). Volunteer referees came from as far away as South Carolina and Maryland.  The documentary crew from the Life shoot was on hand. 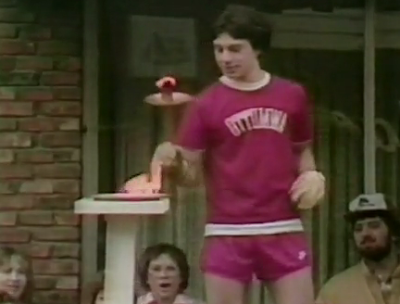 Day invited 21 of the top players to compete in the event. Only two failed to participate, including Billy Mitchell.  Mitchell wanted to attend but after the expense of the Life magazine trip he decided that he didn't want to spend any more money or take any more days off from school. With the temperature dipping below freezing, the festivities kicked off in Ottumwa on Saturday, January 8th with a torch-lighting ceremony and a parade down Main Street. Heading the pack was a player dressed in a Pac-Man uniform that had been donated by Bally/Midway. In place of the band there were pickup trucks with boom boxes (plans to have a convoy of dump trucks fell through). After the festivities (including, some say, a call from Ronald Regan) and parade, the main event got underway (after, that is, Day chased a gaggle of groupies out of the arcade).  Players competed on five games: Super Pac-Man, Donkey Kong Jr., Millipede, Joust, and Frogger. Each player would play three games on each machine with their highest score being recorded.  The top scorer on each game was given a 100 percent rating with the others given a score based on the percent of the top score (i.e. if the top score was 50,000, a score of 10,000 would be given a score of 20%). The final score for each player was calculated by averaging the percentage scores achieved on each game. 19-year-old Todd Walker of Milpitas, CA was the odds-on favorite. Considered the best all-around player in the world, Walker took a unique approach to video games. He found that it was easy for him to get good enough to beat 99.9% of the players in any given game. Getting good enough to beat the handful that remains, however, would take longer than it did to beat the first 99.9%. Instead, Walker preferred to move on to another game at that point. In Ottumwa, Walker  didn't disappoint He crushed the competition with a winning score of 69.58% - almost 23% ahead of second place. The top three finishers - Walker, Darren Olsen of Calgary, and Ben Gold of Dallas would be compete in the finals on That's Incredible. Joe Malasarte of Anchorage finished fourth, less than one percentage point behind Gold. Eric Ginner, winner of the 1981 Centipede fiasco, finished fifth - largely due to a bug in Frogger. The game had a "kill screen" that appeared randomly, making it impossible to finish the game. Ginner got the kill screen after scoring just 15,000 points. Steve Sanders, author of The Video Masters Guide to Donkey Kong, finished 6th.  Ms. Pac-Man champion Tim Collum finished ninth.  Finishing dead last, with a paltry 12.9% was none other than Steve Juraszek, the original video game superstar (though his critics were not surprised). 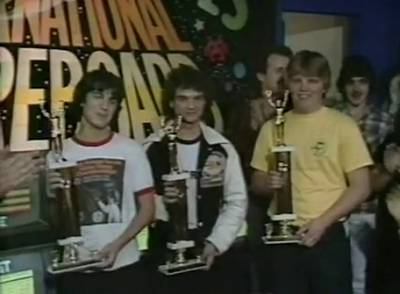 The finals, which aired on February 21st, were more of a sprint than a distance race. Players had to achieve certain scores on five different games in turn: Cosmos (50,000 points), Burgertime (8,000), Millipede (90,000), Donkey Kong Jr. (30,000), and Buck Rogers (20,000). After the whistle blew, the players ran to the first game. When they reached the target score, they could move on to the next. While Walker was considered the best player, Gold took the early lead - within minutes he was 20,000 points ahead of Walker on Cosmos. Walker lost more precious time when he peppered in the wrong direction on Burgertime. Olsen briefly pulled ahead on Millipede before Gold climbed back to the top. The commentary by hosts Cathy Lee Crosby, Fran Tarkenton, and John Davidson, was unintentionally hilarious: "He piles on the pepper and sends down a bun covered with hot dogs and an egg!" "Junior caught papa and papa kicks the evil Mario temporarily out of the picture!" "Ben, the leader, just lost a life to a millipede head!" 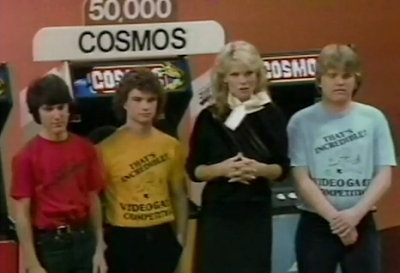 Olsen and Gold finished the penultimate game practically simultaneously and headed for Buck Rogers neck and neck. Olsen quickly took the lead but Gold quickly caught up and was first to the 20,000 mark. He then madly sprinted the 30 feet to the "finish line" pursued by - no one, since Walker and Olsen were still blasting away. Gold, arms raised in triumph, breasted the tape, followed by Walker (who had miraculously managed to catch up) and Olsen. The three collected medals, and kisses, from Crosby (who almost gave the gold to Olsen). The event was perhaps the high water mark of video game popularity in the U.S. The low point would come shortly thereafter. 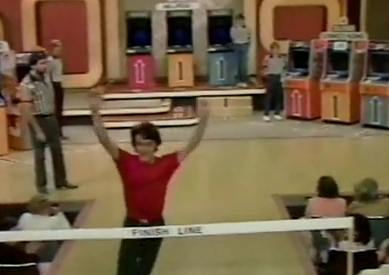 Much of the information in this article came from Walter Day's outstanding Video Game and Pinball Book of World Records - 1st Edition. Many of you may have skipped this one thinking it's nothign but records, but pick up a copy if you can find one.
Note - That's the FIRST edition, not the 2nd of 3rd.
The first edition had a wonderful 200+ page section on "the golden age of video games" in which Day recounts many of the stories associated with Twin Galaxies. The 2nd edition did not include this section (can't speak as to the third).

OK, this article probably didn't tell you anything you didn't already know but I think the next one will - the fascinating and tragic story of the Electronic Circus.
Posted by Keith Smith at 9:03 PM