A quick post about what some consider the first coin-op video game ever - Bill Pitts' and Huck Tuck's Galaxy Game.  Much of this info is from an interview I did with Bill Pitts about 12-15 years ago - back before anybody had really interviewed him and few had even heard of Galaxy Game. This is an excerpt from my book (from the chapter on Computer Space and Galaxy Game) 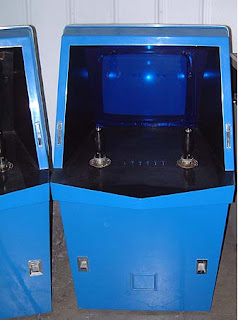 Placed in a blue fiberglass case designed by Hugh Tuck (who had a mechanical engineering degree from Cal Poly), this new version was installed in the Tresidder Union coffee house in June of 1972. This second version included some new features, such as being able to increase the rotation and thrust speeds by holding the joystick in position for a certain amount of time. Despite the features, the second unit failed to match the success of the original.
[Bill Pitts] The system at Stanford in the Student Union always did well. The other system I had, I moved it all over the place and I never did well. Somehow the Stanford community really appreciated this game and they were willing to read a legal-sized document of instructions. In other places, they just didn’t want to do that.
Eventually, the second unit made its way back to the student union coffee house, where it remained until May of 1979, taking in around $60,000.Unlike Computer Sapce, Galaxy Game never saw the outside of the Stanford campus and only two units were ever built. Pitts and Tuck realized from the start that their creation was too expensive to be commercially viable on a large scale (the $60,000 in revenue generated by the second unit was barely enough to cover the cost of building it) and never tried to market the idea to any coin-op manufacturers. The duo's intention had never been to create a game for mass-production, but to produce a coin-op version of the mainframe classic realistic in every detail no matter what the cost. In that, they succeeded admirably