Here are a few games I've come across that I've seen almost nowhere else. Actally, I haven't "seen" most of them since they don't even have flyers or photos that I know of:

Mugger (c1982?) – This game was mentioned in Michael Rubin's Defending the Galaxy, which described it as follows: "Walk through alleys shooting possible muggers. Earn points by killing the muggers before they kill you; lose points if you accidentally kill an old lady or an innocent bystander…Your shots graphically splatter the victims against the walls. Mugger never made it past its prototype in Atlanta." I don't know how reliable Rubin's book is so you may want to take this one with a grain of salt.

Love Miner (c1983) – An outer space mining game in development when Simutrek went under. It is not known if it reached the prototype stage.

Here's an odd one (or three) from the November 1982 issue of Replay.
Three "adult" video games from Computer Kinetics.
Stripper was featured in the movie Joysticks and is apparently a knockoff of Streaking.
As for X-Hot Stuff and Stop the Iatola? I didn't even know there WAS a category called "Red Neck Games". What else would be in it? Big Buck Hunter?

Here's a better version of the photo (from TAFA) - no mention of Stop the Iatola though. 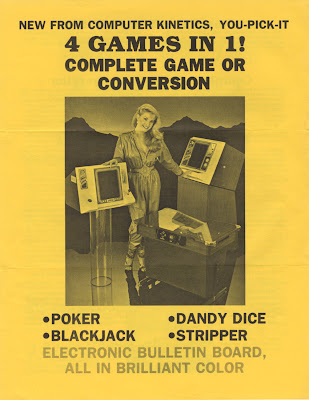 Finally, another Pong clone from 1975:

I was recently going through some 1975 issues of Play Meter and found a few pictures I thought I'd post.

First up, some Atari pix:
Note the Puppy Pong (sign?) on the right

Tank II and Goal IV on the production line

Here's Al Alcorn (what's that on the board behind him? Is it a diagram of a paddle?)

Here's an article on Atari from the February 15, 1973 Boston Herald. I think it's interesting because it still refers to them as "Syzygy" instead of "Atari" (even though they had incorporated in June of 1972 and already released Pong):

Not Atari, but here's another 1975 picture I found interesting. It's a computer portrait booth introduced by Taito America. They installed it at Old Chicago, a combination mall/amusement park that opened that year in Bolingbrook.

Here's another non-video game. I think this one is from ca 1981 (have to double check):

Finally, another non-video from (I think) 1975. This one involved shooting coins out of a gun. 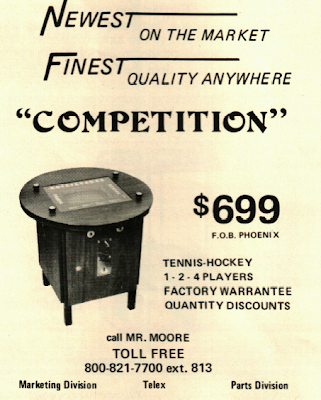