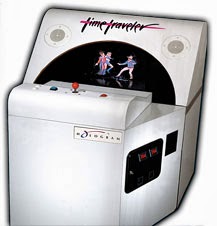 At the September, 1982 JAA show in Japan, Sega had had introduced Astron Belt, often cited at the first laserdisc game (though Electro-Sport’s Quarter Horse had actually preceded it). The game’s actual release, however, didn’t occur until late 1983 allowing Cinematronics to beat them to market with the Rick Dyer-designed Dragon’s Lair. Laserdisc games ultimately proved not to be the savior of the industry that many predicted (or at least hoped) they would be, but they were an interesting side note to video game history that made use of an innovative new technology.


At the ACME show in March 1991, Sega would try again with another new technology – holography – when they introduced Time Traveler, billed as the first game to make use of hologram technology (it also used a laserdisc). Sega coin-op president Tom Petit called the game the “most radical departure in coin-op technology in 15 years” and said the game represented an entirely new class of machine “as different from conventional video games as pinball and redemption”. And this time, Sega knew that Rick Dyer wouldn’t beat them to market since he designed the game. Dyer was, if anything, more enthusiastic than Petit, predicting that the game would spark a degree of interest not seen since Pac-Man. As with the laserdisc game, however, the “hologame” (as Sega called it) failed to take the industry by storm – and for many of the same reasons. But before discussing the details, let’s take a quick look back.


Holography was nothing new in the coin-op world. It had been tried before, but had never really caught on (despite being proclaimed a key technology in the future of the industry since at least the early 80s). Perhaps the first holographic coin-op game was Kasco’s Gun Smoke, a western-themed gun game with a “holographic” target that debuted in late 1975 (though the game actually used a non-laser “hologram” rather than a true hologram – which involves shining a laser through special film or other recording media). The game was licensed to Taito America for U.S. distribution, who showed it at the 1975 MOA show. While the unit was a hit in Japan (reportedly selling 6,000 units), it flopped in the U.S. (with just 750 sold). Nonetheless, Kasco followed up with Samurai and Bank Robber (the latter, which used 8 different “holograms”, was shown at the ATE in London in January, 1977) 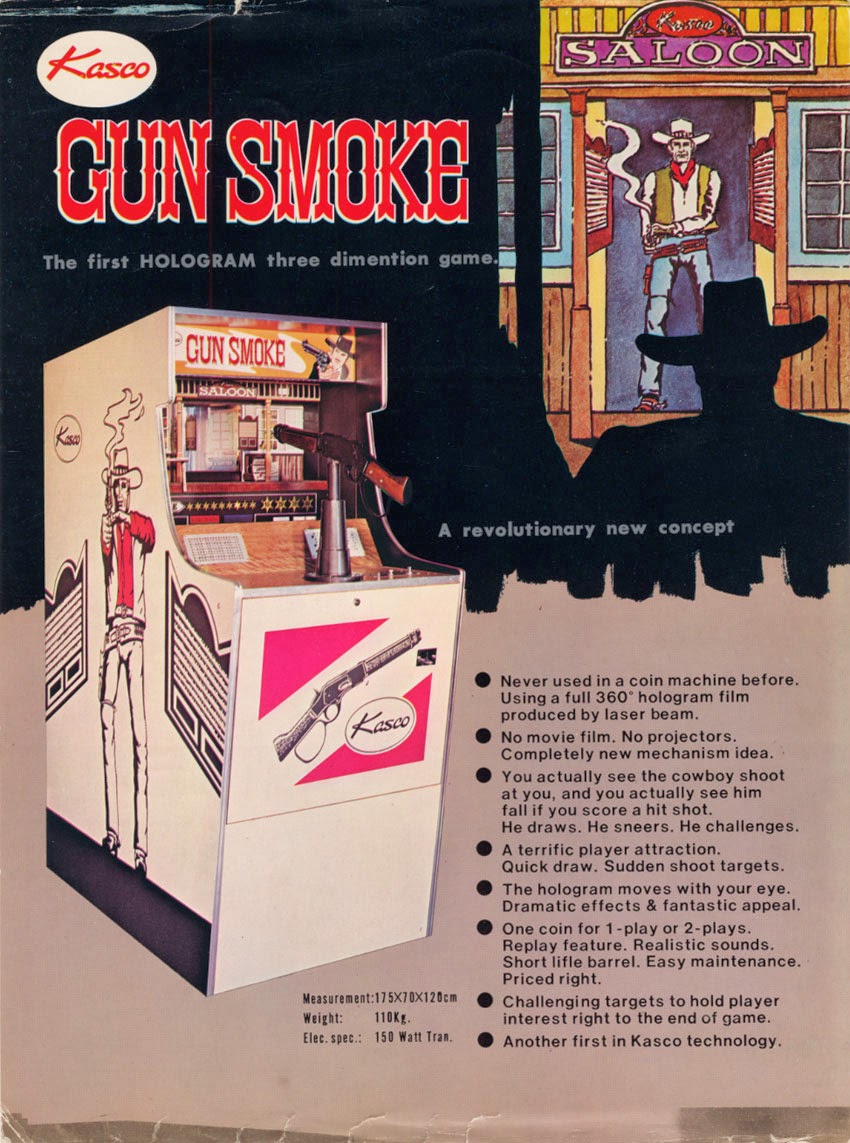 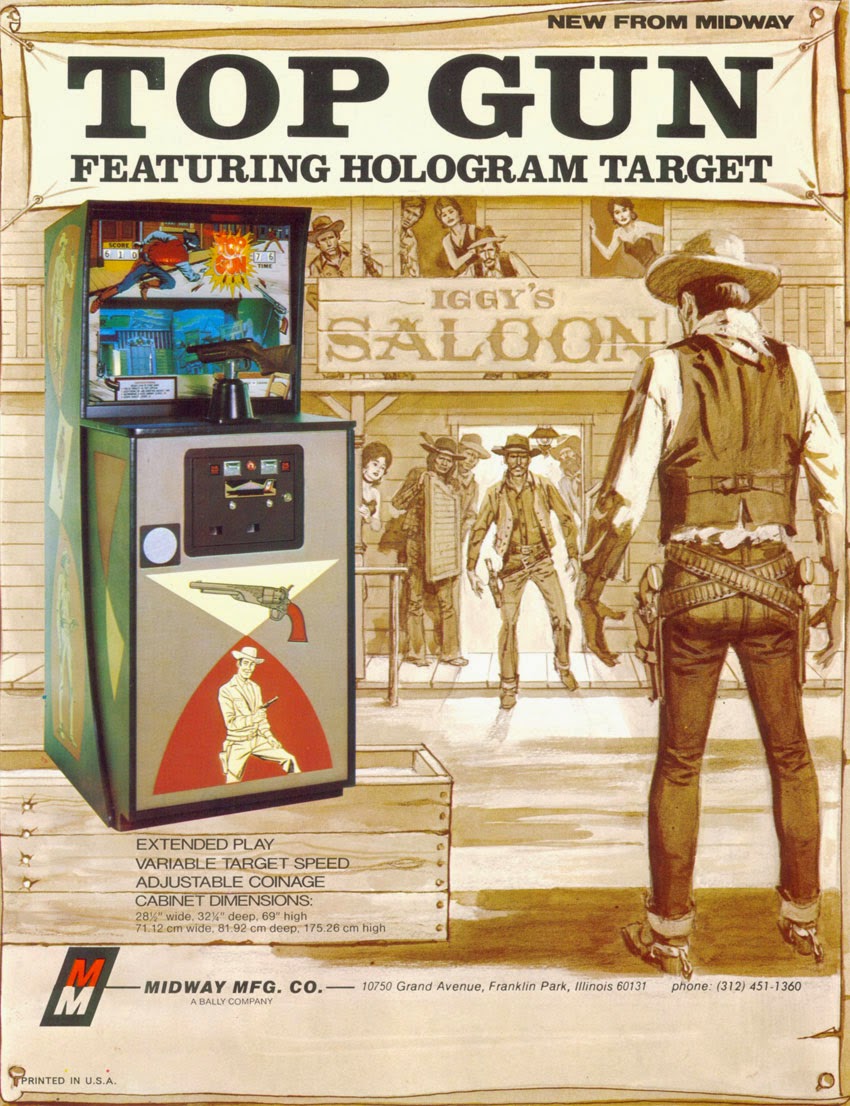 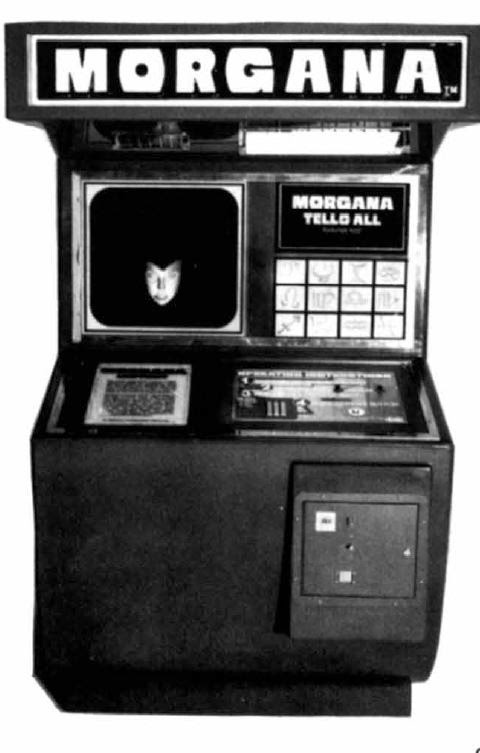 What about video games? While a number of companies looked into the technology in the late '70s and early '80s, none were able to release a game (at least not an arcade game), and it is not certain if they even developed one. In 1978, Meadows Games was purchased by Holosonics, a Washington-based company that had bought up 90% of the patents in the field of holography. Not long after the deal, Meadows announced plans to produce a holographic video game, which was slated for release in early 1979, but Holosonics went bankrupt, Meadows Games folded, and the game was never produced. After producing the 3D game Dark Planet, Stern was reportedly at work on a holographic game, but it too was never released an no other information on it has ever surfaced. On the consumer front, of course, Atari produced Cosmos – a console that made use of holographic technology, but neither Atari nor anyone else is known to have produced a holographic coin-op video game. About the closest thing came in 1980 when a company called Lazeworld (founded by John Foy) produced a holographic overlay for Asteroids that produced multi-colored special effects when an enemy was destroyed (Foy also produced “pinball glasses” – a pair of glasses with holographic lenses that a player was supposed to wear while playing pinball to enhance the experience).


The Creation of Time Traveler


It would be 1991 before a holographic game finally made its way into arcades. The genesis of the game came when Rick Dyer read a story in the February, 1990 issue of RePlay about a product called the Del Vision Micro-Theater that created 3D “holographic” images. The Del Vision was made by company in Chatsworth, California called With Design In Mind , though the technology had actually been invented (and patented) in Japan by Dentsu, Inc. – an advertising and PR firm that had been founded in 1906 and had produced the first newspaper ads and TV commercials in Japan. Dentsu used its holographic technology for advertising and point-of-purchase displays. It licensed the technology to With Design In Mind, who used it to create the Del Vision Micro-Theater (invented by Steve Zuloff and Barry Benjamin). The Micro-Theater debuted at the 1990 winter CES, where it wowed the audience with a demo that included multi-colored fish and jellyfish floating in space and a tiny ballerina that seemed to dance across a glass surface (RePlay said that the product “could almost be called the hit of the show”). 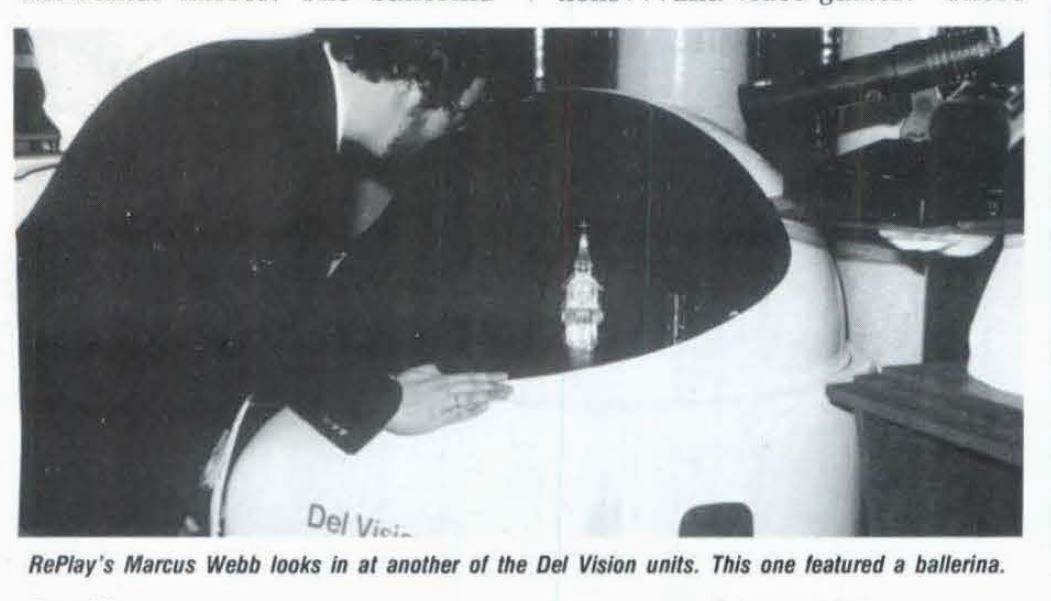 At the time, Dyer was working for a company called Allen Design in Carlsbad, California. After reading the article, he immediately contacted With Design In Mind and within a week, had inked a deal with the company (Capcom and Leland also tried to license the technology for use in video games, but Dyer beat them to the punch). Allen Design and With Design In Mind formed a partnership called Hologram Ventures and began designing a video game using the Micro-Theater technology. In truth, the Micro-Theater (and Time Traveller) did not use true hologram technology. Instead, it used a parabolic mirror shaped like a quarter sphere to project an image from a video monitor into space. 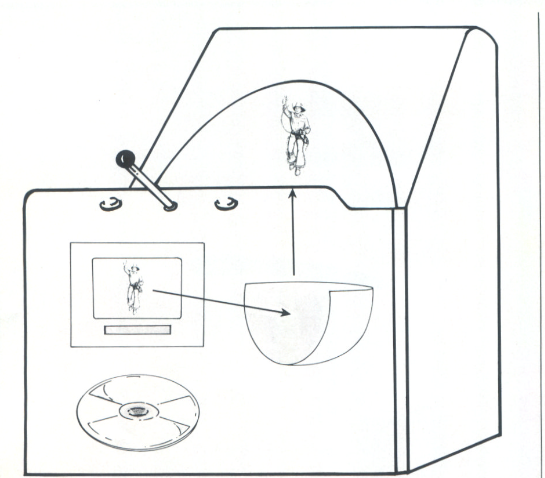 Unlike a true laser-based hologram (which allowed viewers to see an image from different perspectives as they walked around it), the mirror technique produced the same perspective from every viewing angle. One issue that Dyer’s team had to solve was the mirror, which, according to Dyer, had cost $7,600 per unit when used in Japan (a prohibitive cost for an arcade video game). To solve the problem, Dyer subcontracted the creation of the mirror to an aviation firm that made canopies for fighter jet cockpits who was able to produce the mirror at a much lower cost. Nevertheless, development of the game was still expensive. Dyer’s team worked 24-hour shifts for the last 10 months to get the game ready for the ACME show (Dyer claimed it was one of the biggest R&D commitments in the history of the industry). Meanwhile, in late 1990, Sega had signed on as a partner to manufacture and promote the game. While Time Traveler used a laserdisc to store the game’s footage, unlike Dragon’s Lair and Space Ace, the game used live action rather than animation. 1,000 actors auditioned or the game’s 36 speaking parts. Actor and professional Hollywood stunt coordinator Steve Wilbur landed the role of the game’s hero Marshal Gram. Las Vegas aerobics instructor LeAnn McVicker played Princess Kyia-La and Robert Mannigan (a struggling actor who was producing a cable access show in San Diego) was cast as the game’s villain Vulcor. Filming in San Diego, a crew of about five people headed by producer director Mark E. Watson, created about 30 minutes of footage for use in the game, complete with full digital soundtrack. 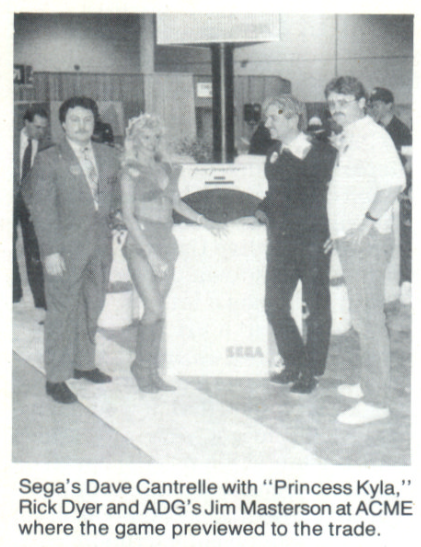 In the game, Kyia-La, Princess of the Galactic Federation, travels back in time from the 26th century to the wild west to recruit the hero Marshal Gram (a sutble pun on “hologram”) to track down the renegade scientist Vulcor, who has “disrupted the time continuum of the universe”. To stop the dastardly Vulcor, Gram has to travel through 12 different eras of time (though from YouTube videos, there appear to be only 7), from 50,000 BC to 2552, squaring off against a host of enemies including ninjas, knights, cavemen, punk rockers, archers, the devil, and a 300-pound Amazon queen (played by actor Kevin Mein in drag). The action consisted of a series of short segments in which the Marshal used a joystick and buttons to either outdraw his enemies, or duck and jump to avoid their deadly weapons. To aid him on his quest, Gram had a limited supply of “time reversal cubes”, which would turn back the hands of time after the Marshal’s untimely death to give him a second chance (additional cubes could be purchased from a sultry female "trader" by inserting more quarters). While the game may sound interesting, generated a lot of buzz, and met with initial success (grossing a reported $18 million), it ultimately failed to deliver on its promise and disappeared even more quickly than Dragons's Lair and Space Ace. Part of the problem was its insane level of difficulty, which frustrated a number of players. A bigger issue, however, was that many felt the game itself just wasn’t very good. Like Dragon’s Lair and the other laser disc games of the 1980s, it was little more than a reaction meter/memory test in which the player merely had to learn the correct sequence of moves and then repeat them. Likely in an effort to alleviate this problem, the game chose randomly from five different scenes per era and also included a few additional elements (like a scene in which the player gambled with the devil for his life) but the basic gameplay was sparse. The various scenes largely consisted of an enemy or two running in from the left or right to attack the Marshal, who then had to shoot them (sometimes jumping or ducking a few times first). Most were less that 30 seconds in length. Once the novelty wore off, there wasn't much of a game left. In addition, the game was soon overshadowed by the genre-defining megahit Street Fighter II, which debuted around the same time. In an attempt to cash in on the fighting game craze, Sega produced a follow-up to Time Traveler called Holosseum in 1992 that combined a fighting game with hologram technology but it lacked real interactivity and fared even worse than Time Traveler and holographic arcade games died an even quicker death than laserdisc games had. Nonetheless, Time Traveler stands as a fascinating sidebar in video game history. 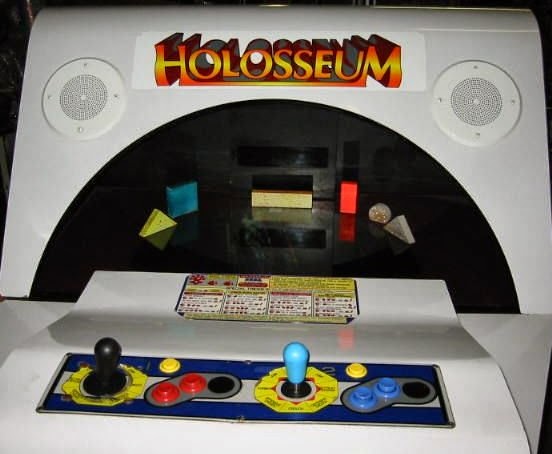 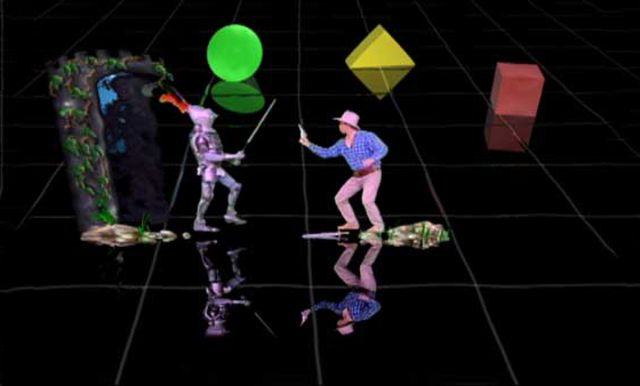