The Ultimate (So Far) History of Allied Leisure/Centuri - Part 9 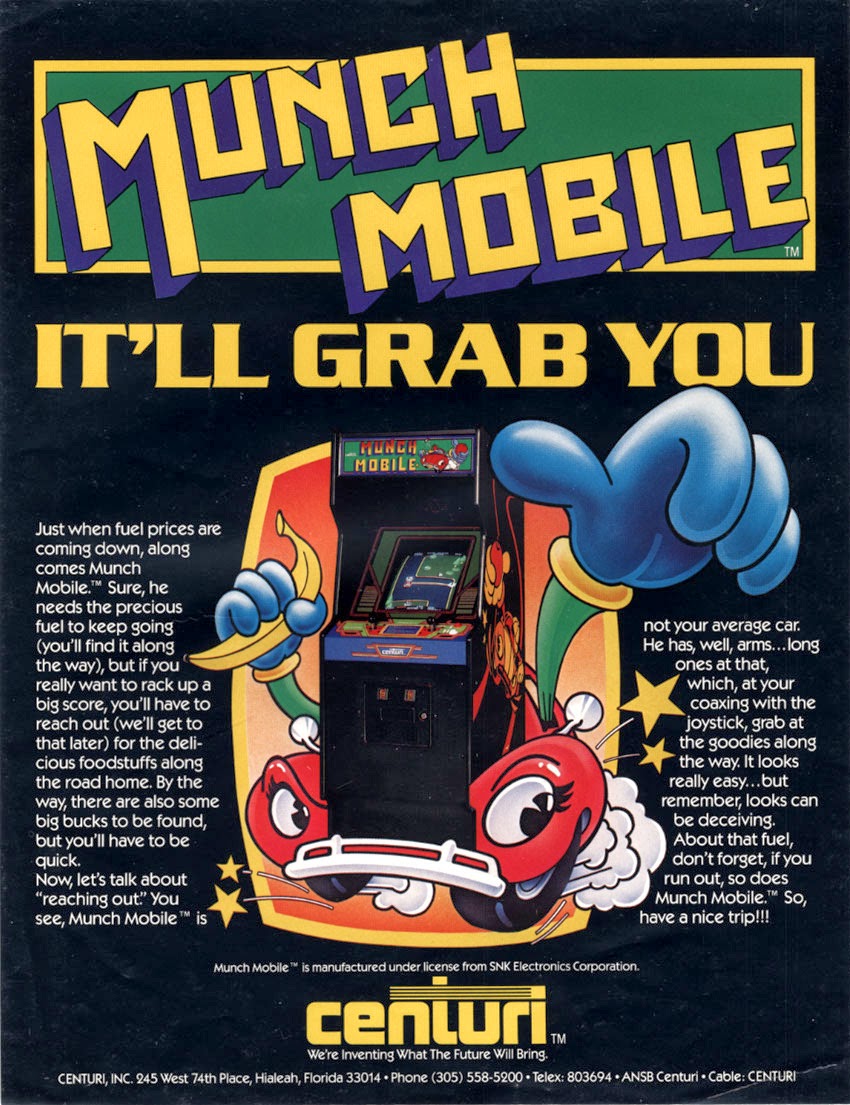 In 1983, Centuri continued to plumb the licensing market with a pair of games from Japan. Munch Mobile (SNK) was one of the 1980’s strangest driving games. The player controlled am anthropomorphic car with eyes and a long, rainbow-colored arm that it could use collect trash and money bags from the side of the road (it could also grab fish from the occasional river that appeared). In addition, the player had to avoid oncoming cars (usually by pulling off the one-lane road into one of the small pullouts located along the side of the road). Bonus points could be earned by depositing trash such as apple cores and fish bones in roadside garbage cans. Guzzler (Tehkan) was another Pac-Man variant featuring fire-based enemies like fireballs, flashes, and demons. Rather than energizer dots, the player slurped up water from puddles then vomited on his enemies to extinguish them (he more water the player had, the slower they moved). Water may not have been the only things guzzler was guzzling. Intermissions showed the character drunkenly gulping down bottles of liquor, bringing shame to his family. Released as a conversion kit, the game made it to #8 on RePlay’s software charts. 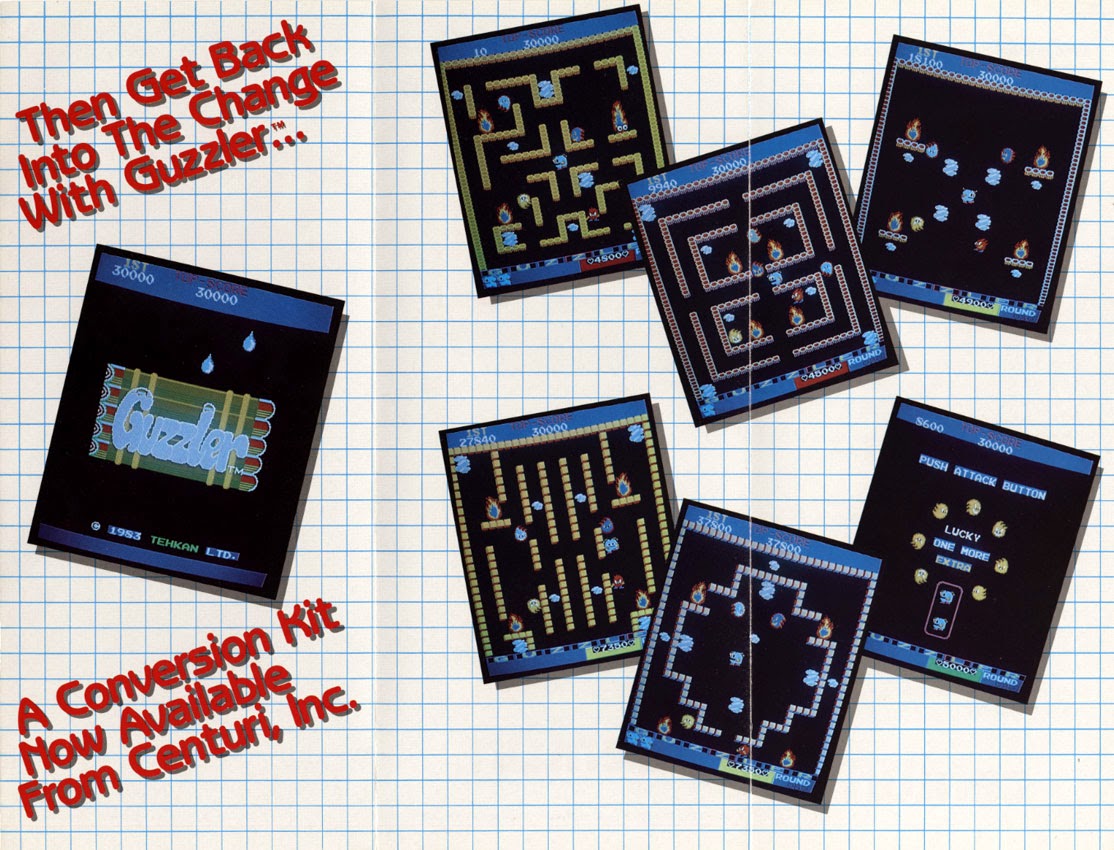 Aztarac (October) was Centuri’s sole entry into the color vector market and their last game designed in-house (or at least their last non-licensed game). In the game, the player defended a series of starbases from alien invaders. The most memorable feature was the round, bubble window in front of the monitor. Perhaps more interesting than the game is its designer - computer visionary Tim Stryker. Stryker graduated from Brown University in 1977 with a bachelor's degree in Physics. That same year, a friend and fellow student named Ken Wasserman bought a Commodore PET computer and when Stryker saw it, he ordered one for himself and the two began writing games in BASIC. Before long they were hooking their two computers together and began writing multiplayer games. Since BASIC was too slow for the task, they created their own language called RPL and used it to write a real-time combat game called Flash Attack that allowed two computers to be linked together via a cable. In late 1979, they penned an article about the game and sent it to Byte magazine. Meanwhile, they tried to find a publisher for Flash Attack but no one was interested (Scott Adams of Adventure International sent them a copy of TRS80 modem game Comm*Bat). Puzzled, they decided to sell the game themselves, formed a company called Mach 2 Software[1] in Danbury, CT, and convinced Byte to include a small ad alongside their article when it was published in the December, 1980 issue. After selling only a handful of copies of the game (and even less of their other titles) Stryker moved to Florida and continued to work on games, including his time working for Centuri. 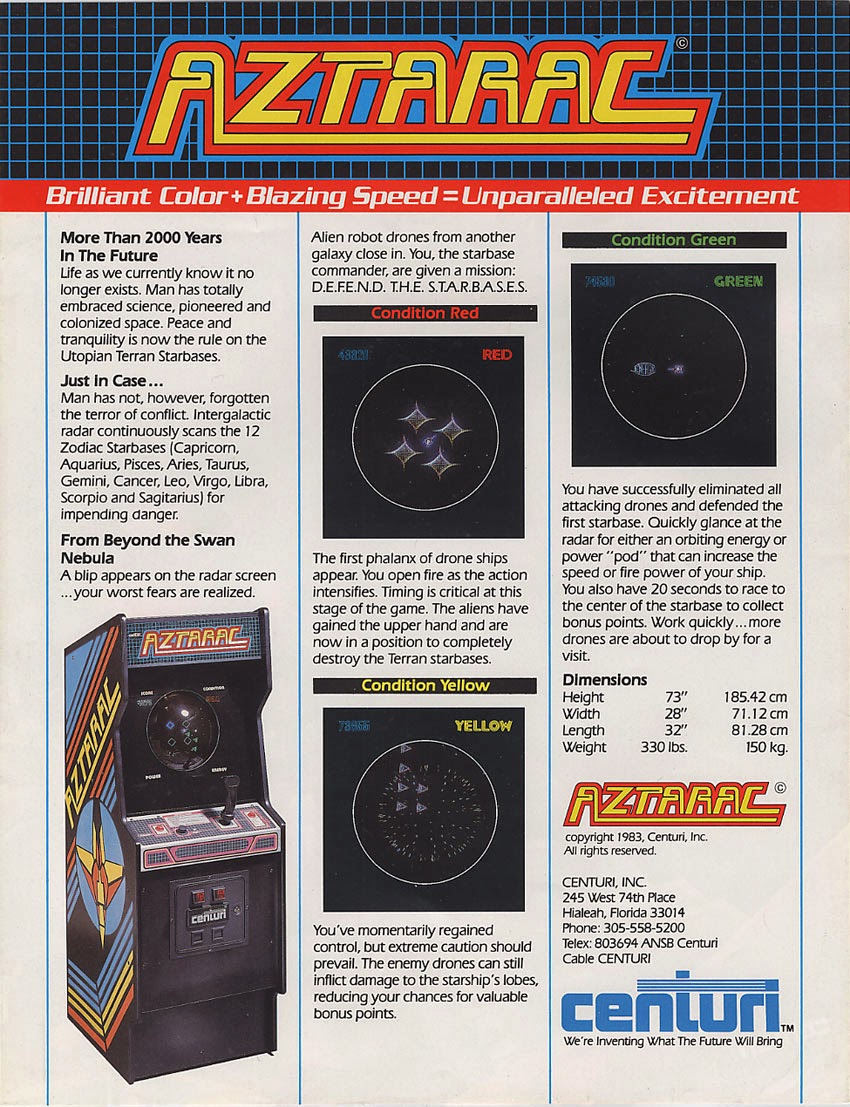 Aztarac was a space combat game set in the year 4031. After a thousand years of peace, robot drones from beyond the Swan Nebula have launched an attack against the 12 Zodiac Starbases. The player controlled a “space tank” using a joystick to control the tank and a spinner to control the gun turret. The goal was to defend each of the starbases in turn from alien attack while collecting energy and power pods to increase the tank’s speed and firepower. While the game featured excellent graphics, including one of the best titles screens in golden age history, it proved another flop. While a number of sources (including the website centuri.net) claim that 500 cabinets were built, from the numbers in Centuri’s annual report, it looks like they may have made 200 or fewer.


After leaving Centuri[2], Tim Stryker served as a consultant for the Florida Solar Energy Center, G.E. and other companies. In 1985 he founded Galacticomm in Fort Lauderdale, FL, which released his most well-known creation, the seminal bulletin board software program MajorBBS (a version of Flash Attack was ported to MS-DOS that allowed users to play via modem). Stryker also began to pursue his goal of creating a society based on compassion and love. Disdaining traditional politics, Stryker began the Superdemocracy movement, an effort to allow citizens to vote and participate in the political process in cyberspace. In 1995 Stryker moved to Utah with his wife and four children. Stryker also suffered from clinical depression. In August of 1996, he pulled off a road in the Colorado hills and shot himself. He was 41.
While Munch Mobile and Aztarac flopped and Guzzler did only marginally better, 1983 was not a repeat of 1982. This was due almost entirely to Centuri’s other licensing partner, Konami. But that will have to wait for part 10.

[1] While a number of sources, including Wikipedia, refer to the company as “Mach 1” software, the 1980 Byte magazine by Stryker and Wasserman and an interview with Wasserman refer to it as “Mach 2.
[2] It is unclear if Stryker ever actually worked for Centuri or if he did contract work.

In an earlier post, I mentioned Centuri's connection with Leisure Time Electronics. Here's a newspaper ad for one of Leisure Time's scams, from January 12, 1981 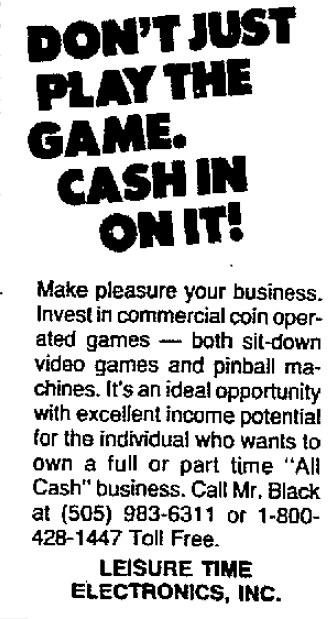 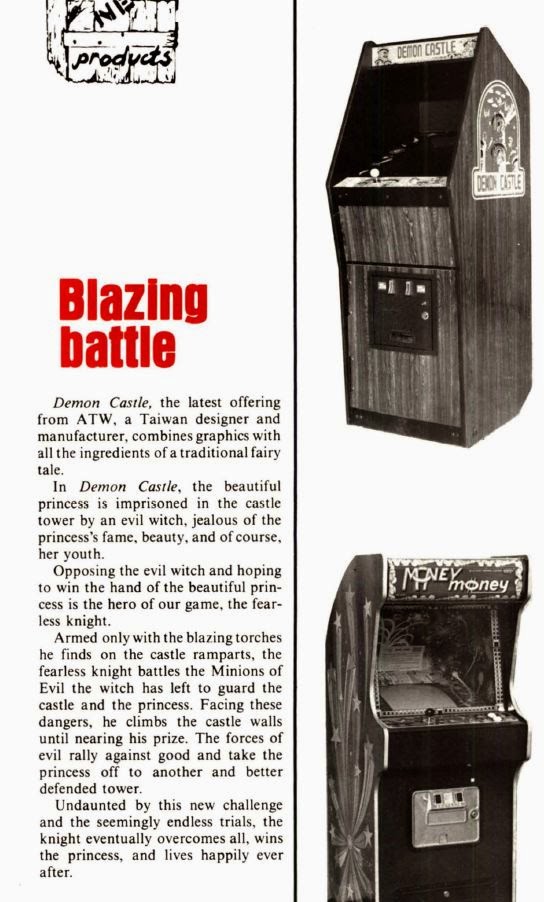 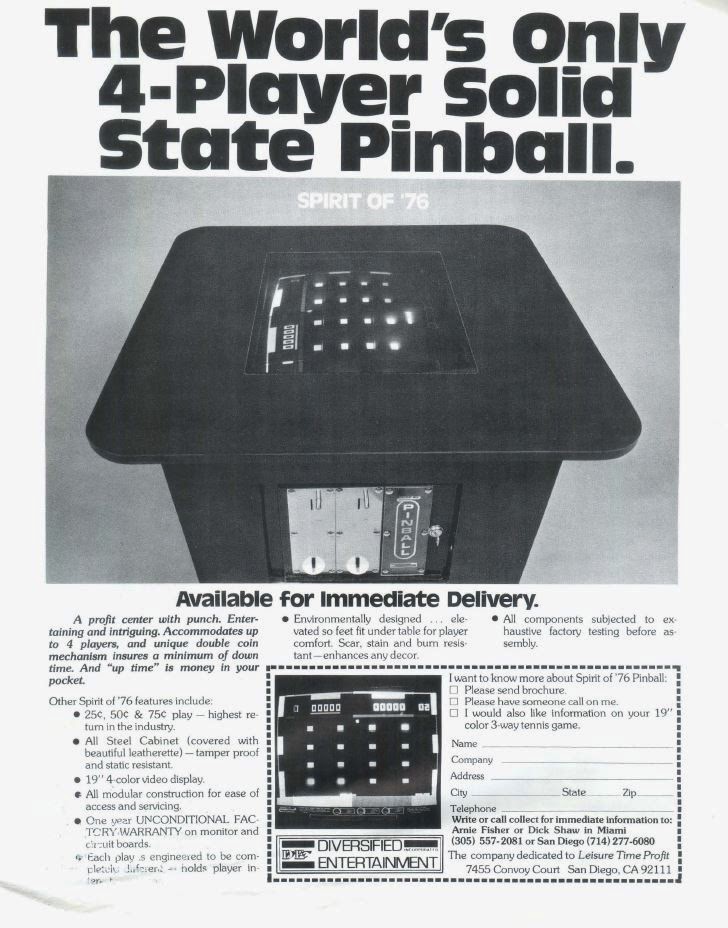 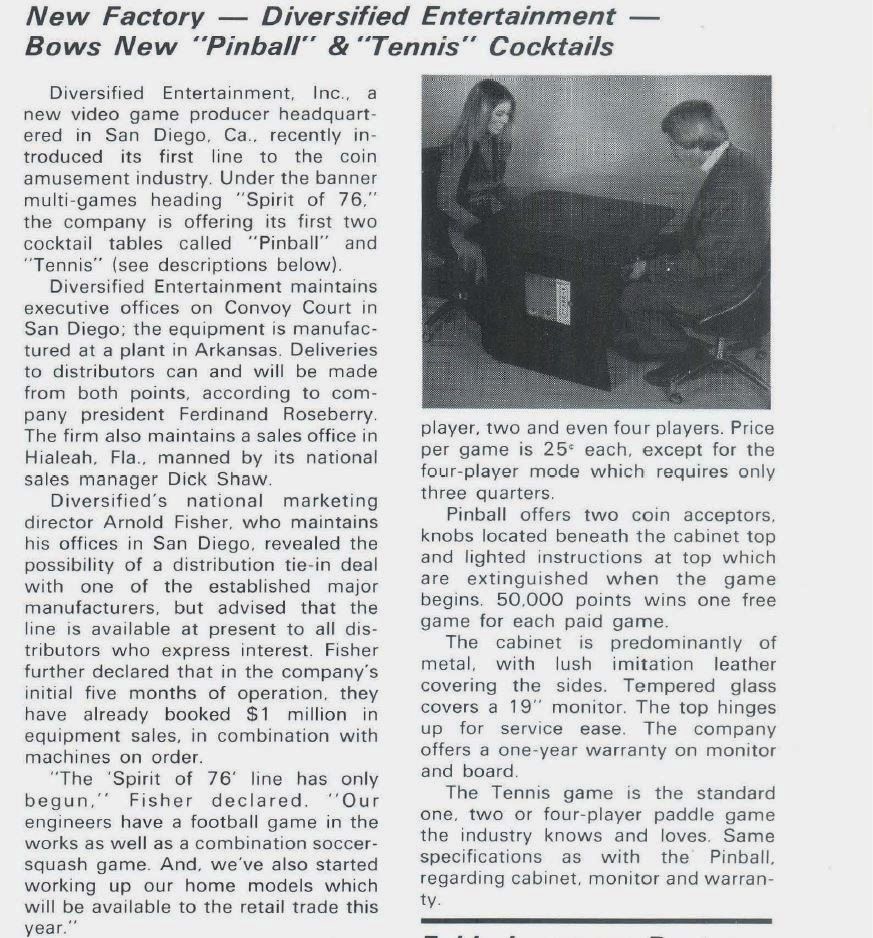 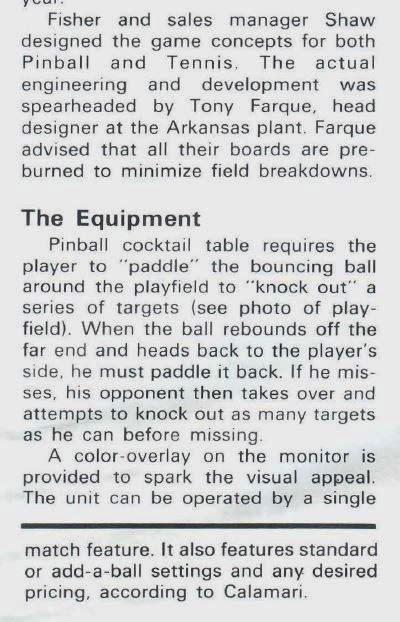 An ad for an Asteroids kit that I found interesting (from Play Meter, 1/15/81) 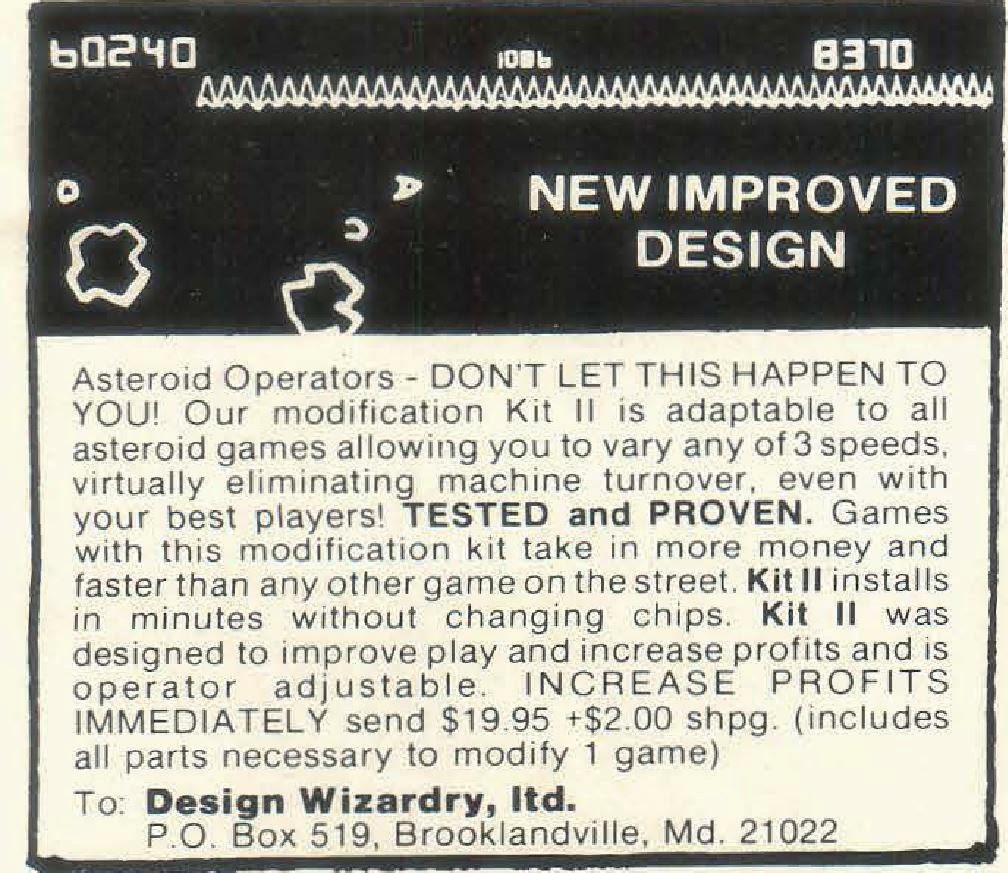 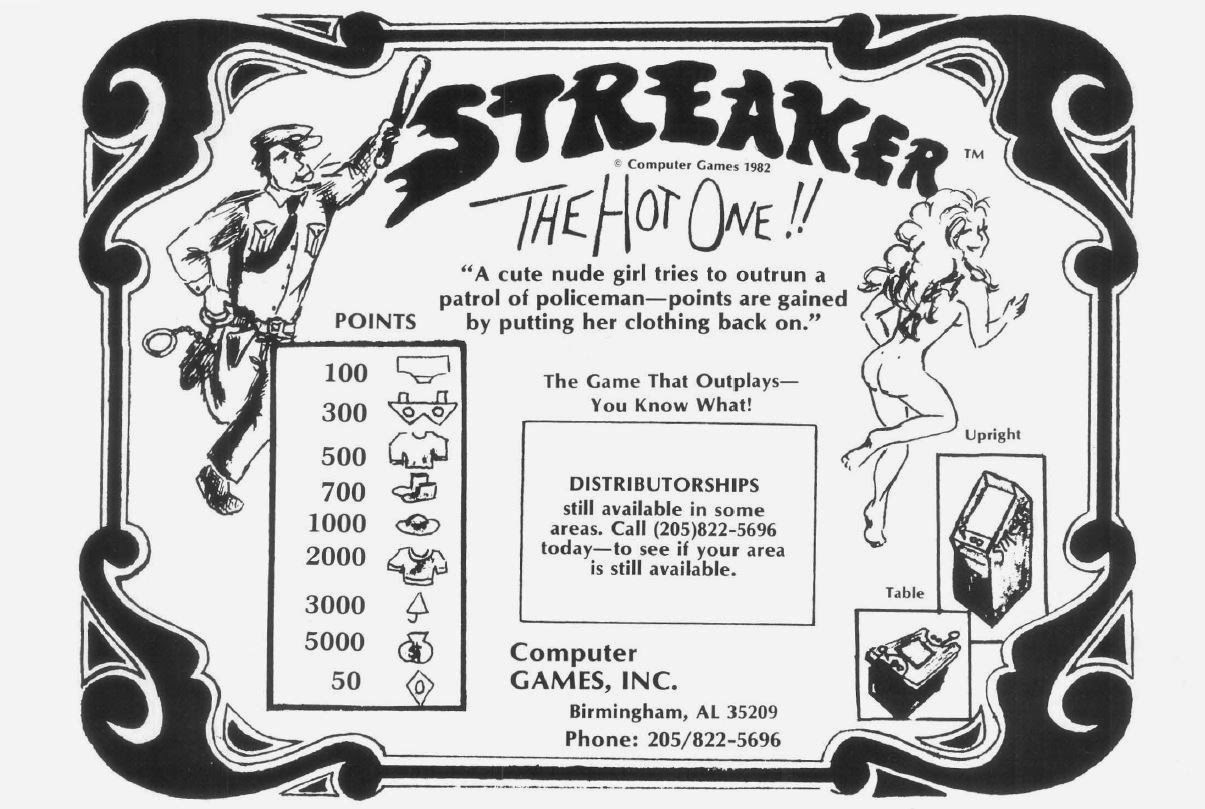 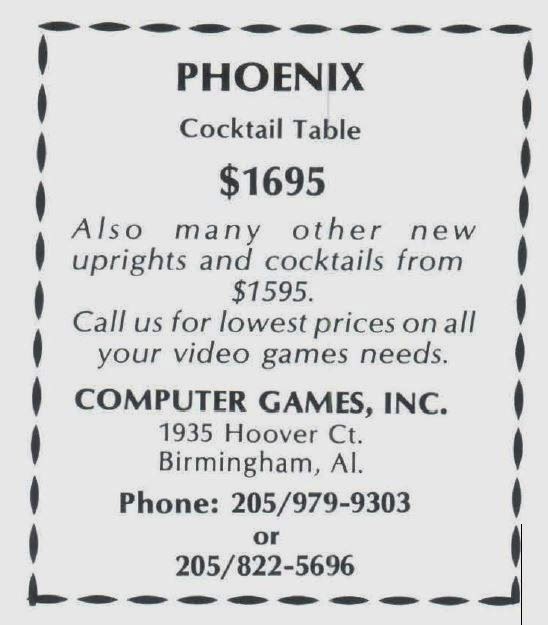