In today's post, I conclude my look at golden age video game fiction with a pair off titles aimed at slightly older readers.

First up is Video War by Stephen Manes 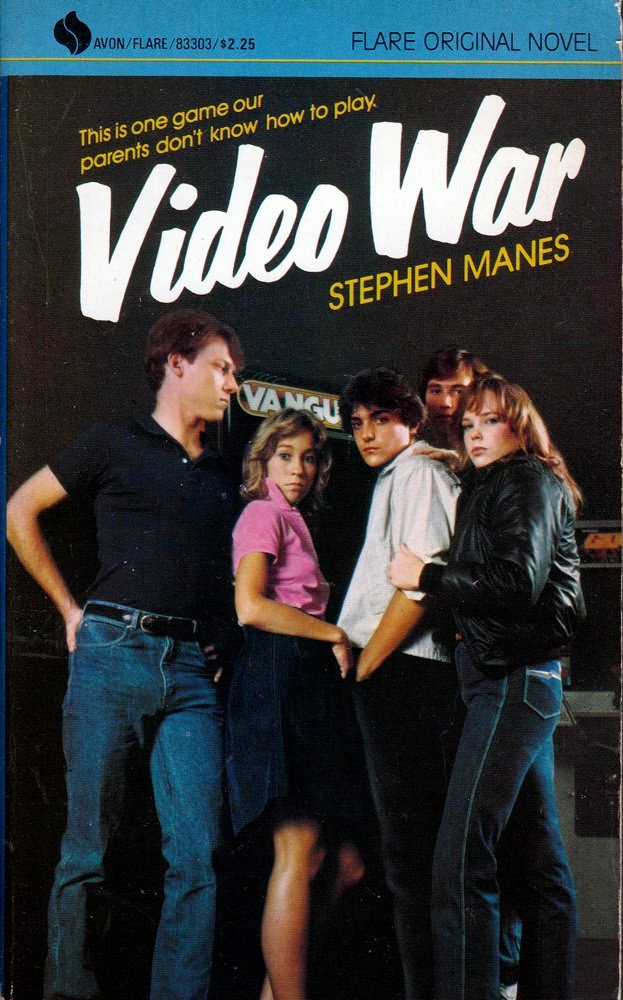 Video War was published in 1983 by Avon Books (note that Amazon lists the publication date as 2012, but this refers to the digital edition released that year). Since some of you might actually want to read these books, I will only describe them briefly in order to avoid spoiling the ending. Video War tells the story of a disaffected teen named Zoz who spends him time at Arnie's arcade playing a game called Penetron while designing video games in his head (after his alcoholic mom drags him out of an arcade in front of his friends, for example, he creates the game Big Mama, in which you try to shake a 300-pound mother off your back). When his mom's boyfriend, a cretinous city council member, tries to shut down Arnie's and ban video games in Bunker Hill Bluffs, Zoz and his friends form VIDEO (Valley Individuals Defending Entertainment Options) and hold a play-in to raise money for charity and hopefully thwart the nefarious city council. Along the way, Zoz falls in love with a painfully shy hacker named Rowena, whose parents buy her expensive computer equipment as a substitute for the time they can't spend with her.

According to Amazon's author page, Manes, who has a degree in cinema from USC,  "has written more than thirty books and hundreds of articles in a long career of making arcane words accessible to the uninitiated." His first listed book is "Mule in the Mail", published in November, 1978. In the early to mid 1980s, he wrote a number of books, including a riddle book (Socko), a series of BASIC programming books for various home computers co-written with Paul Somerson (Computer Craziness, Computer Monsters etc.), and a pair of children's fiction titles (The Boy Who Turned Into a TV Set and Life is No Fair!). In October, 1982, he published the young adult novel I'll Live, in which "Eighteen-year-old Dylan faces painful changed brought on by his father's terminal illness." Later works include the Obnoxious Jerks, Hooples on the Highway, and Be a Perfect Person in Just Three Days (which "won kid-voted awards in five states and is a curriculum staple in American and French schools"). Manes also coauthored a biography of Bill Gates (Gates: How Microsoft's Mogul Reinvented an Industry and Made Himself the Richest Man in America) and wrote a book on the world of ballet (Where Snowflakes Dance). For classic video game fans, the most interesting of his later works is probably That Game From Outer Space, which Amazon describes as follows:

"The giant video game that appears one day in Pete's Pizza Palace is the strangest one Oscar Noodleman has ever seen. It looks more like a rocket ship than a game. There's not a word of English on it anywhere; everything from the control panel to the coin slot is labeled in some strange language that seems to use squiggles instead of letters. And when he and Pete finally figure out how to get it working, they discover the loudest game they've ever heard. But as the screen pops out to wrap around Oscar's head and he gets deeper into the game, he discovers levels and challenges unlike any he's ever seen. He begins to wonder if this isn't just a game, but a real rocket from outer space. Some colorful bugs run down the screen and into the coin slot. And that's when things start getting downright weird . . ."

Both That Game From Outer Space and Video War are available as Kindle books. 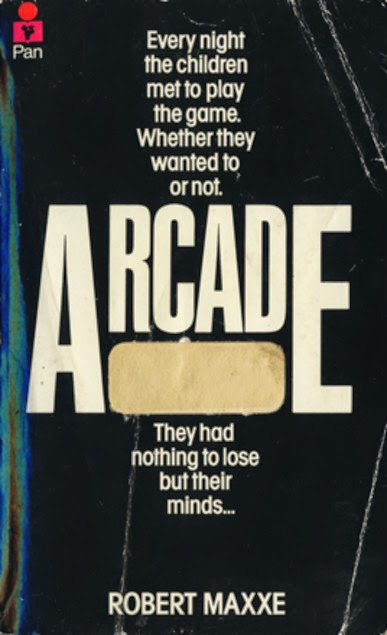 ,
This one was published in October 1986 by Paperjacks, which is technically after my cutoff year for the golden age of video games (1985), but it is close enough and was likely inspired by the golden age, so I'll cover it. The publisher's synopsis on Amazon does a pretty good job describing the book's plot:


"Something is capturing the minds of children in this small town. When her son Nick becomes captivated by "Spacescape," a game at the new video arcade, and spends all of his free time playing his way to the game's elite levels, Mrs. Foster suspects that Nick has become a victim of the game's uncanny, malevolent influence and imagines that kids are being brainwashed by this electronic video-game. The heroine here is lovely young widow Carrie Foster, who runs a gourmet food-shop in a quiet, posh Long Island village--and becomes increasingly fretful about the new video arcade that recently opened just down the street. True, Nick's grades in school certainly aren't suffering. In fact, he's becoming scientifically precocious. But why do the arcade games seem to be so much more sophisticated than others? And why is there never any sign of the owner or manager? And why do the kids who play the games seem to be forming into exclusive cells, with ungifted players permanently barred from the machines? Even Carrie's new love, computer architect Lon Evans, can't quite figure out the technology involved. And then one of the barred non-players drowns--a possible suicide. So Carrie becomes convinced that something is wrong. She and a dubious Lon start tracking down the people behind the arcade--finding only a single entrepreneur in an abandoned factory, who offers an almost plausible explanation. But, with Nick refusing to give up the game, Carrie's surer than ever that "some unholy, unhuman" force is programming the kids. Furthermore, when she and Lon kidnap and dissect one of the machines, their suspicions are confirmed: Lon finds super-sophisticated signs of 'biochips' & brain chemistry, organic soup--a way of feeding intelligence via the game's joystick! So who is behind it all?"

This one sounds like an alarmist book inspired by anti-video game hysteria, but it really isn't (at least not entirely). I actually thought this one started out quite well, but kind of lost me once they got to the explanation for all the mysterious events and I found the ending quite disappointing. Still, it's well worth a read for anyone who remembers the good old days.

Recently, I came across what I am pretty sure is Nolan Buhnell's first "press announcement". How can I be so sure? Well, take a look:

That's Nolan's birth announcement from the February 14, 1943 issue of the Ogden (Utah) Standard. Note that he was actually born in Ogden, not Clearfield (though his parents lived in Cleafield at the time).
OK, so it wasn't exactly a "press release" and it doesn't mention him by name, but I thought it was interesting (maybe I need to get out more).

Here's one from he March 7, 1958 issue of the same paper that does mention his name: 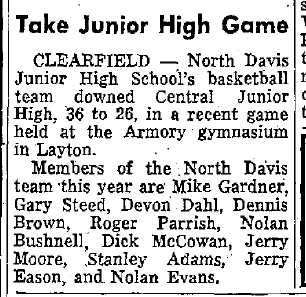