Recently, I came into possession of a number of documents from the Magnavox v Bally case(s) of the 1970s and found some fascinating new info. A quick background before jumping into the details: starting around April, 1974 Magnavox began filing suit against a number of coin-op companies for patent infringement. They started (I believe) with Chicago Coin and Seeburg, but eventually brought in a number of other companies, including Atari, Bally, Midway, Ramtek, and Allied Leisure (consolidated under a single case).
I have long wanted to get my hands on the trial documents for the case, since they often contain tidbits of info that you can’t get anywhere else. In addition, they are much closer (in time) to the original events and, given that they are legal proceedings, claims are more likely to be accurate since a) the parties often provide physical evidence to back them up and b) the parties are under oath (this doesn’t mean they couldn’t lie, but it would be riskier to do so).


Recently, Marty Goldberg pointed me to a 2012 article on the first known video game lawsuit, which actually wasn’t the Magnavox case but the 1973 Allied Leisure v Midway case:
http://repository.jmls.edu/cgi/viewcontent.cgi?article=1340&context=facpubs


I found the article to be outstanding, and very well researched (sadly, far better, IMO, than most of the video game history that you find on the web or in print). I strongly recommend it to anyone with an interest in early video game history.
Even better, the author of the article was kind enough to provide me with copies of the trial documents that he had not only for the Allied v Midway case, but also for Magnavox v Bally.


Two of the most interesting sections to me were the depositions of Jerry Koci (Chicago Coin VP of Engineering and long-time game designer) and Bob Fritsche (Odyssey product manager for Magnavox).
Chicago Coin


The most interesting of the two was probably Jerry Koci’s deposition, taken on May 28, 1975. Chicago Coin had been in the arcade business since 1931 and between 1973 and 1975 they produced 8 video games, most of them Pong clones. Koci’s most interesting revelation concerned the game TV Goalee. 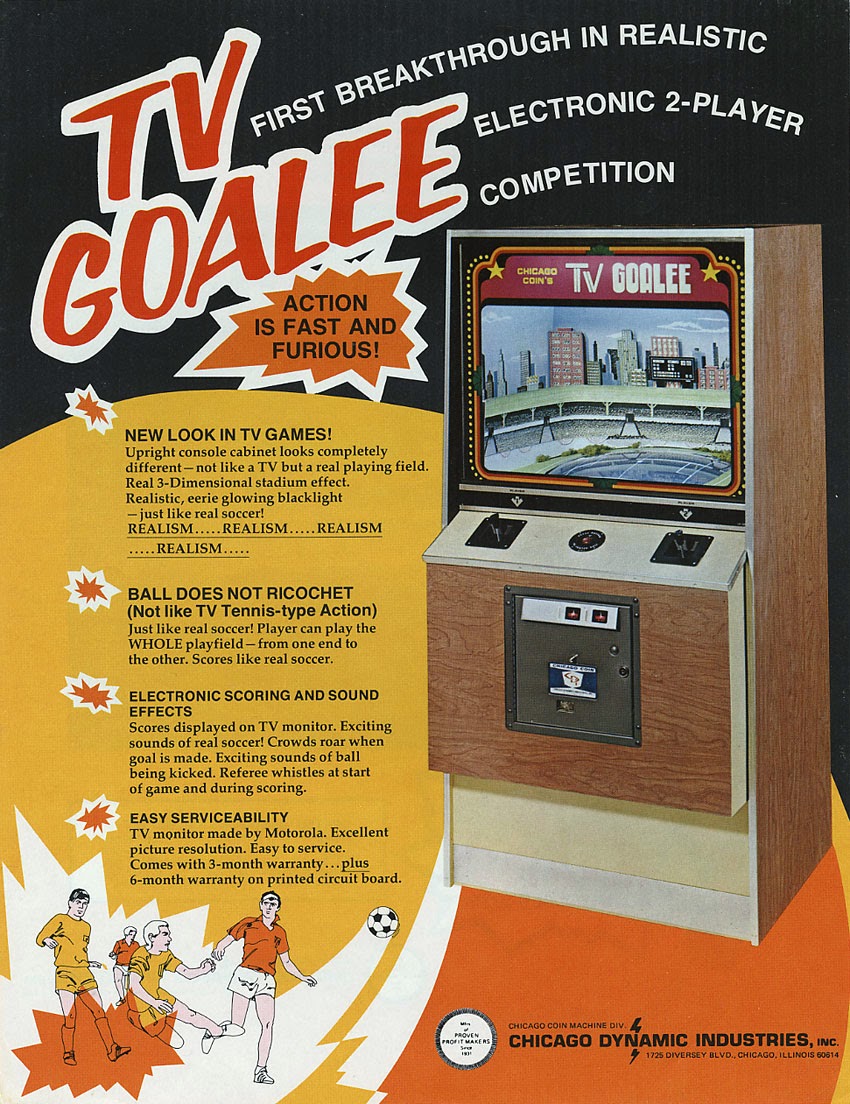 TV Goalee was actually an interesting game in its own right. While the game itself appears to be another ball-and-paddle soccer game, it had a few twists. For one, it used joystick controllers (though that isn’t overly interesting, as there were a number of other Pong games that did so). The ball didn’t bounce off the walls as in many other “hockey” style games (though that may have been common in soccer games). The really interesting part to me, however, is the cabinet, which included a miniature 3-D soccer stadium with the monitor mounted horizontally. 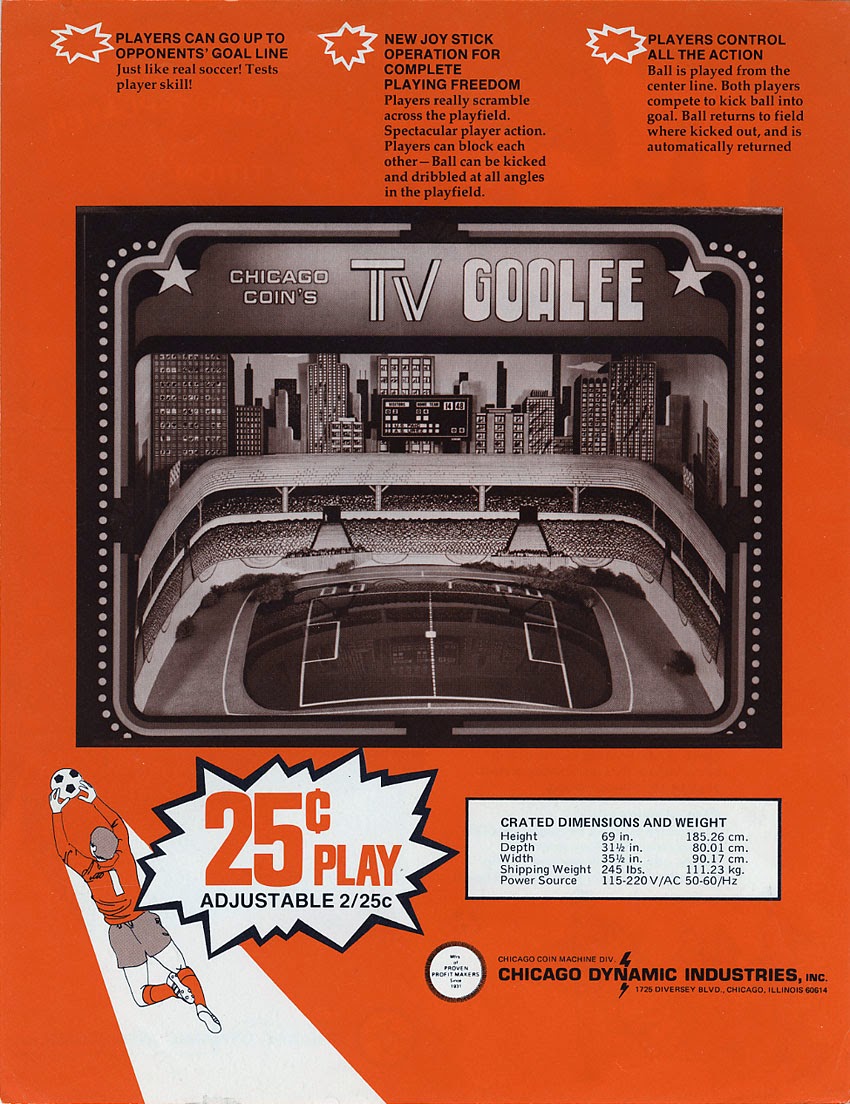 Still more interesting is that the game was actually designed not by Chicago Coin, and not even in the U.S., but in Australia, making it one of the earliest foreign video games licensed for release in the U.S.
Here is the relevant section of Koci’s testimony:


Q Does Chicago Dynamic [note Chicago Coin was a division of Chicago Dynamic Industries] employ or retain or utilize any consultants for the design, development, or manufacture of video games?
A We have in the past used Exidy, and we have consulted with Illinois Research on some problems.

Q What’s the full name of that company? Is that Universal Research?

Q The university or college?

A Yes, the research division.

Q Has Illinois Research Division of Illinois Institute of Technology actually designed a game for you?

A No, sir. They were called in on specific static problems.

Q Anyone else that Chicago Dynamic has used as a consultant, designer, developer of video games?

A We have not used a consultant, but we did acquire a game made in Australia.


Q I think I asked you about TV Goalee before and what the origin of that was?
A Are you sure it was Goalee? You weren’t referring to Tennis? [Note – Koci had earlier claimed that he didn’t recall where TV Goalee was originally designed, but he was apparently thinking of TV Ping Pong or TV Tennis]


Q Well, early, I thought I had, but that’s not important.
A If it was Goalee, then Mr. Anderson, that came from Australia.


Q Let’s pursue that a little further.
A Okay.

Q What’s the name of the source of that TV Goalee designed in Australia?


A I can’t recall. It’s our distributor called Leisure-something Enterprise.
Q Would you provide us with the accurate name of that company and perhaps its address in Australia?


A Yes, They are located in Perth.
MR. THREEDY I think it’s Leisure Time.


THE WITNESS Well, we will confirm it Mr. Anderson.
Q How did TV Goalee first come to the attention of Chicago Dynamic?


A Mr. Steinberg, the president of Leisure in Perth, Australia, had written us about the game and sent in a prototype at our direction.
Q Does the game have the same name in Australia, or is it called by a different name?


A I don’t believe it was ever produced in Australia, to my knowledge.
Q Does Leisure manufacture video games?


OK, so who was Leisure Time Enterprises and when did this all occur?
I suspect that Koci is actually referring to Leisure & Allied Industries, a leading Australian coin-op company. Leisure & Allied Industries was a group of companies founded in 1958 by Malcolm Steinberg (note that Koci had said the president of Allied was “Mr. Steinberg”). they are probably best known as a distributor and for starting the Timezone chain in Australia in 1978.


The following photo, from this site was captioned “Our factory, Palmerston St, 1973, Perth” 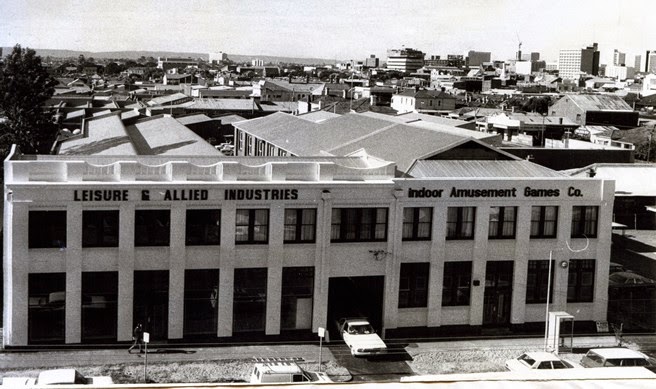 From trade magazines, I know that the company still located at that address in 1977, meaning that they were indeed in Perth when TV Goalee was made.Given the similarities of the name, the location, the witnesses uncertainty, and the name of the president, I think Koci was actually referring to Leisure & Allied Industries. It's possible, however, that Leisure Time Enterprises was either a division of Leisure & Allied or another company they set up. Malcolm Steinberg had other relatives that worked at his company. So another possibility is that one of them ran another company in Perth.


BTW, here’s a photo of Malcolm Steinberg back in the day (I suspect 1958), from the same site. 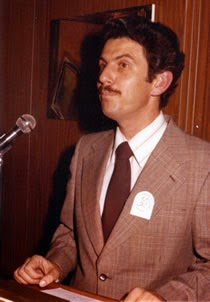 And here he is today: 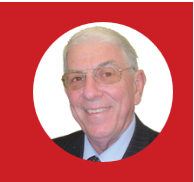 I’m not sure if Allied designed the cabinet or just the game. So when was TV Goalee made? Koci answers that question too. In fact, he provides production run dates for almost all of Chicago Coin’s video games. Production of TV Goalee started April 29, 1974 and ended August 22, 1974. I have only found one release announcement for the game, from the June, 1974 issue of Vending Times, but I suspect they began selling it in early May (since sales usually started shortly after production began). They also showed it at a distributors meeting on May 3, which supports a May release date.


So TV Goalee was an early example of a foreign-made game licensed for release in the U.S. but was it the first? I’d have to go back through my notes to be sure, but it certainly seems to be a candidate. I wrote earlier about Midway’s TV Basketball (a licensed version of Taito’s Baskbetball) being possibly the first Japanese game licensed for U.S. release. I’m not sure when TV Basketball was released, but my best guess is around June, 1974. If accurate (and it may not be), this means that TV Goalee came first. Off the top of my head, I can’t think of any earlier European video game licensed for U.S. release, but I’d have to read through my notes. There were a number of Canadian ball-and-paddle games, but I don’t know if they were sold in the U.S. and if they were, if they were licensed or just sold by the Canadian manufacturer (the first Canadian coin-op video game company may have been Volly, which was allegedly set up by Ramtek but I think they only sold games in Canada). There is also the possibility that Leisure & Allied sold the game to Chicago Coin outright rather than licensing it (though even if true, it might still be the fist European-designed game released in the US). 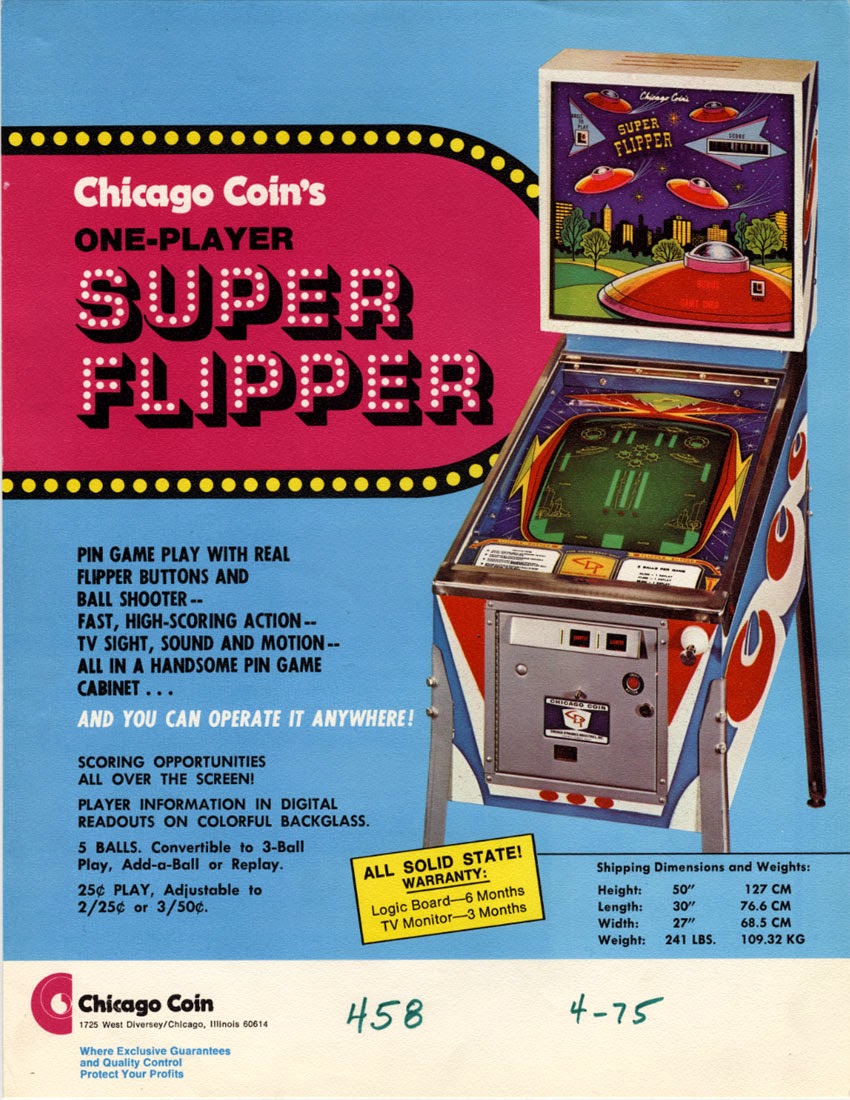 I talked about this one earlier, so I won’t go into the details here, but Koci revealed some interesting information about its origins as well.


A That was developed by a company in Ancona, Italy.


Q How do you spell that?


A Company.
Q Is that company affiliated with Chicago Dynamic in any way?


A They recently became our distributors for Italy. Prior to that, we had purchased – or at least arranged a royalty agreement on a game called Trapshoot.
Q Was that a video game?


A No sir, it was not.
Q Was that a game that they had developed and licensed you to make?


A Yes, sir.
Q Was Super Flipper a game which was completely developed by Model Racing and sold to you as a complete package, or was it a development agreement between the two companies?


A It was completely packaged and sold to us as a completed game.
Q Is Model Racing Company of Ancona, Italy a manufacturer of video games, do you know?


A They have manufactured this one, and I think it could have been their first introduction to video games.
Q Have they distributed Video games of U. S companies in Italy, do you know?


Q For how long gas Model Racing Company been a CDI distributing company in Italy?


A About a month, month and a halt.


Q What contact had CDI -- and when I say "CDI," I mean Chicago Dynamic

Q -- had CDI had with Model Racing prior to that first representation about a month ago?


A As I mentioned before , we did arrange a royalty arrangement on Trapshoot, which was about a year and a half ago, two years.


A The manager of our Wiesbaden office, by the name of Michael Barr [sp?], is in close contact with all our distributors and manufacturers throughout Europe. And as I recall the story, they had called Mike – that is, Model Racing – that they had Super Flipper pretty well finished, and that he, Mike Barr, should make arrangements for somebody at CDI, if they could run over to Italy to look at the new game.

Q Did you go and look at it?


A Avron Gensberg went there, Mr. Anderson. I have been there many times.
--


Actually, this "revelation" is not entirely new. The Italian Coin-Op Video Games Zone had earlier speculated that Super Flipper was a licensed version of Model Racing’s UFO, which they claim was “the first original [video] game made in Italy” 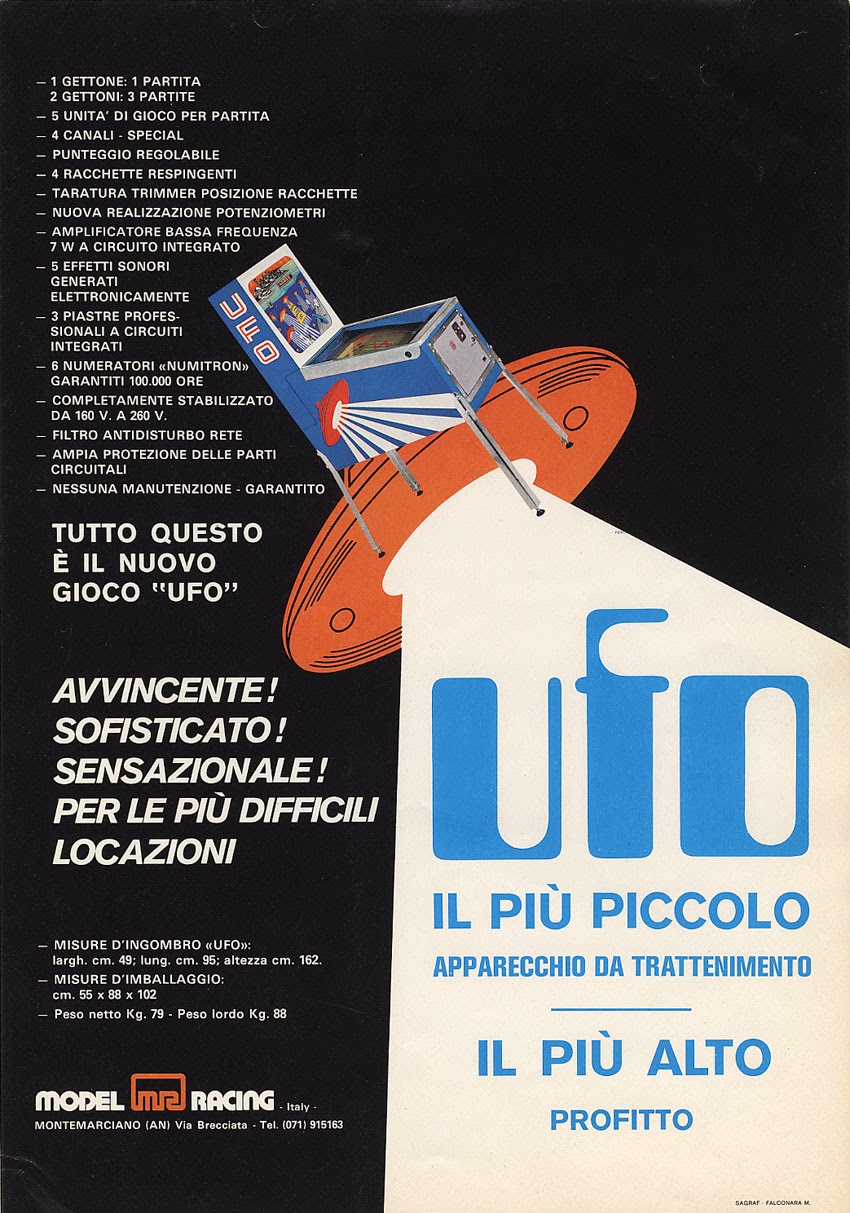 The site claims that UFO was shown “in January, 1975 at the AMOA Exhibition” but this is clearly wrong, since the AMOA (actually just the MOA at the time) was held November 1-3, 1974. I suspect they may have meant the ATE in London, whish was held in January, 1975.
Model Racing was there. In fact, here's a photo of their booth at the show, featuring their shooting game Duck Shooting 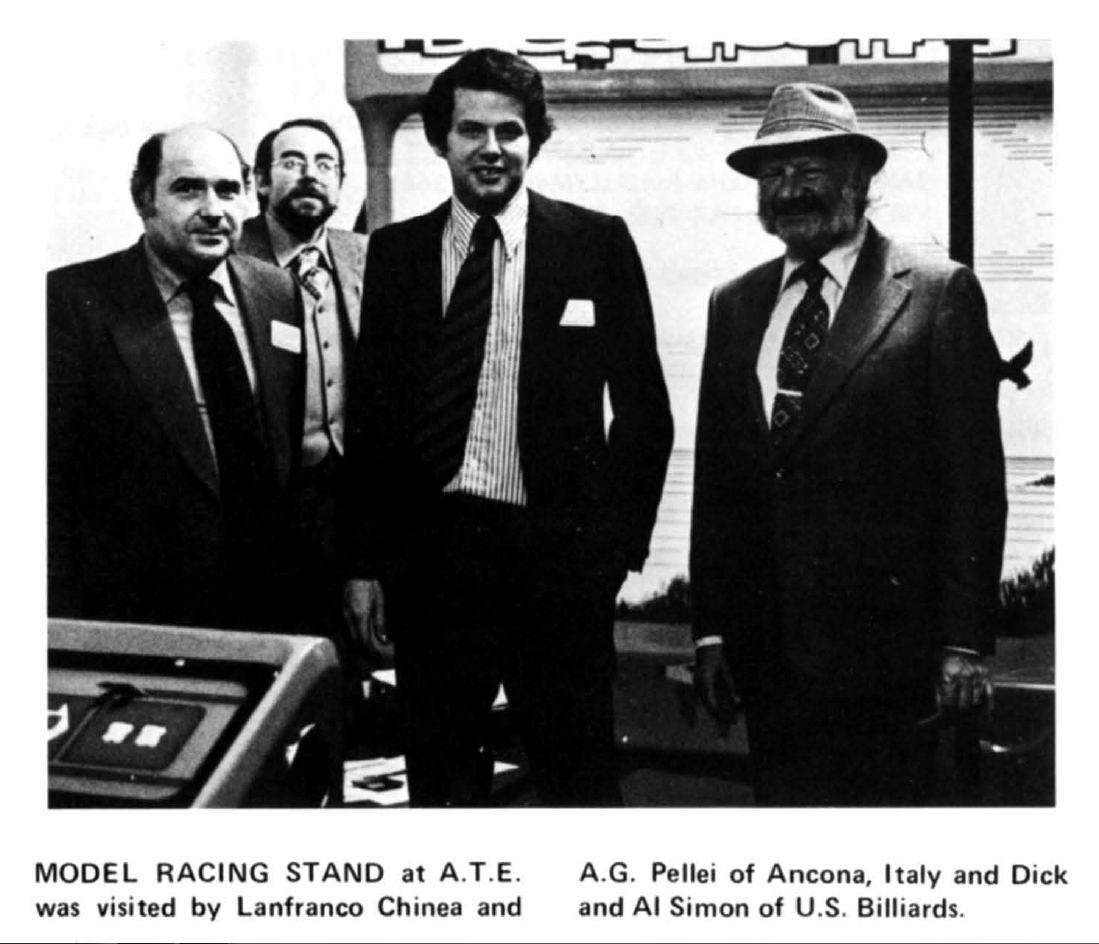 
Other Revelations
Koci revealed a few other interesting facts during his deposition. The most interesting to me were those production dates I mentioned earlier.


He also noted that production on Super Flipper had just started "today" (presumably 5/28/75).


Next time, we’ll talk about Fritsche’s deposition.
Posted by Keith Smith at 2:13 PM