So far, we’ve been looking at some video game fiction, but these were relatively rare. Much more common were non-fiction books – in particular strategy guides. THESE were the ones that made the bestseller lists and the ones most people probably think of when they think of video game books of the 1980s. About two dozen of these were published for arcade games (and that’s not counting the various home game strategy guides).
How to Play Space Invaders
Taito
1980 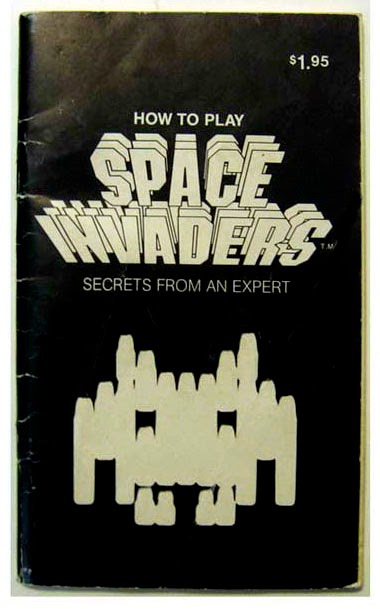 As far as I know, this was the first arcade video strategy to be published. Sadly, I do not have a copy as it is extremely rare. It was a 61-page guide written by an anonymous “Japanese Space Invaders champion” and published by Taito. It was originally published in Japan, where it sold quite well, then published in the U.S. Here are some photos from http://www.steverd.com/whatbook/whatbook.htm 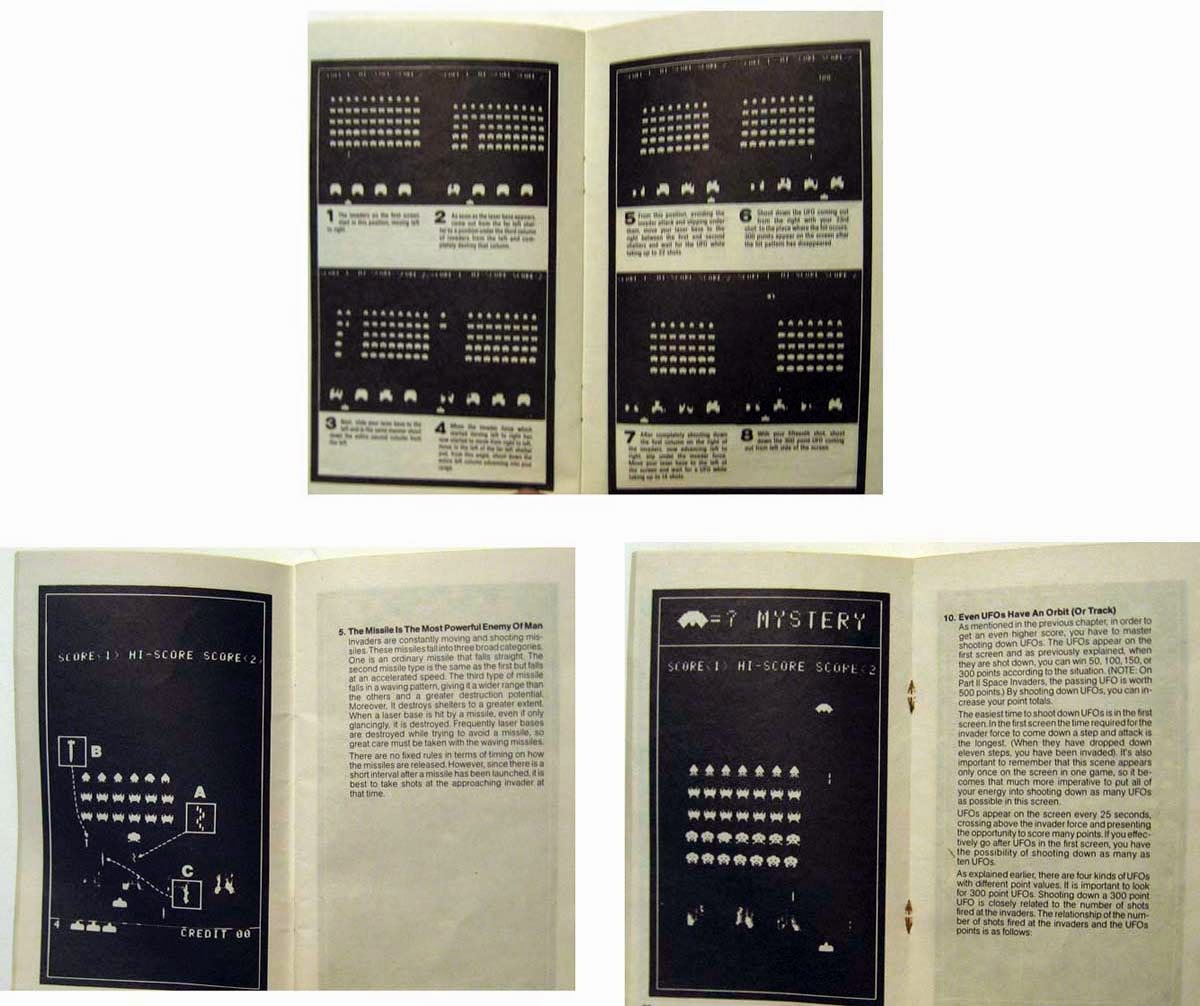 How to Win at Video GamesRay Giguette1981Martin Press (Torrance, CA) 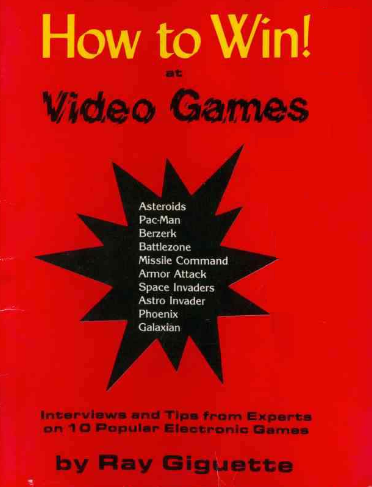 This is the first mass-market strategy guide I’ve been able to find. Once again, however, I do not have a copy, nor do I have much information on it. It covered juste ten games and checked in at a scant 46 pages. Nonetheless, it sold 10,000 copies, which may tell you how popular video games were and how much people were starved for strategy guides. The book ended with an advertising promising a second volume, but it was apparently never published.
How to Master the Video Games
Tom Hirschfeld
Bantam Books
December, 1981 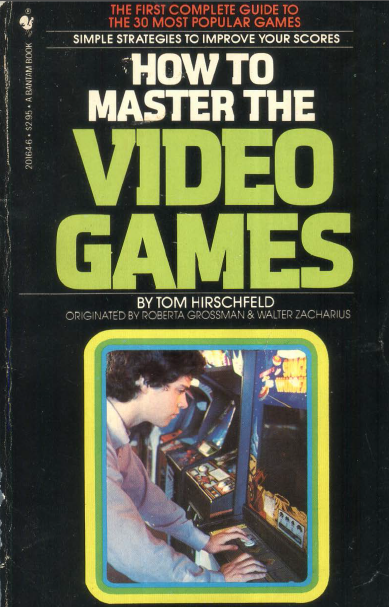 Now THIS one I had and loved (and yes, that's Tom on the cover). Giguette’s guide may have been the first coin-op strategy guide to hit the bookstores, but it was hardly a major hit. In December, 1981 Bantam Books released How to Master the Video Games by Tom Hirschfeld, which became the first video game bestseller. The book was the brainchild of visionary publisher Walter Zacharius, a legend in the independent publishing world. 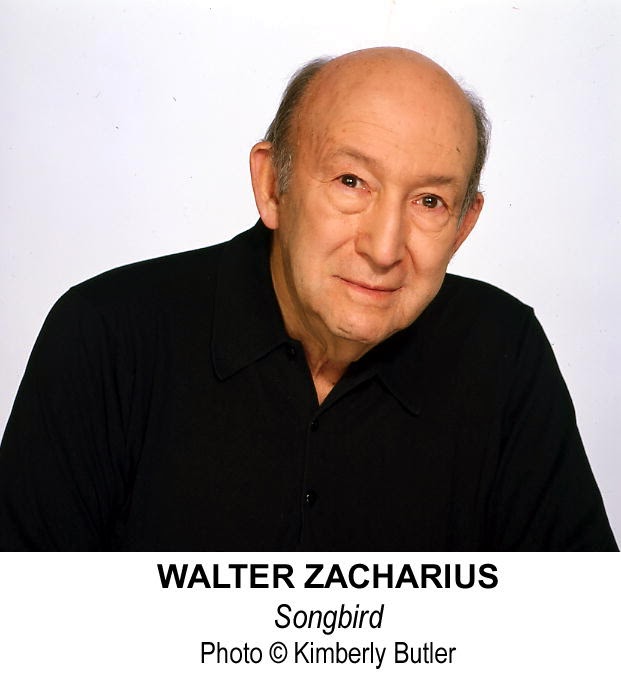 Born in Brooklyn in 1923, Zacharius took part in D-Day and the liberation of Paris at age 19. After returning to the U.S., he attended New York University on the G.I. Bill before landing a job with McFadden Publications where he worked on romance magazines like True Story and True Confessions. Aimed at working class women, these magazines often featured lurid tales of wayward women who fell into sin, learned hard-bitten lessons, and emerged triumphant. This experience would serve Zacharius well throughout the remainder or his career. After leaving McFadden, Zacharius went to work for Ace Books, a publisher of paperback genre fiction, including science fiction, fantasy, westerns, and mysteries. At Ace, Zacharius created the two-in-one Ace Double Novel line, which became the company’s mainstay. 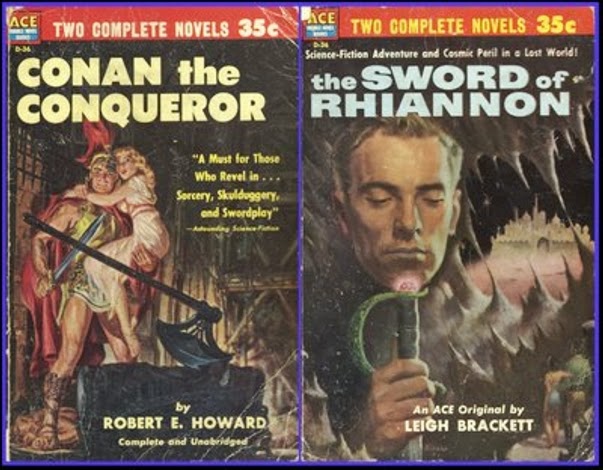 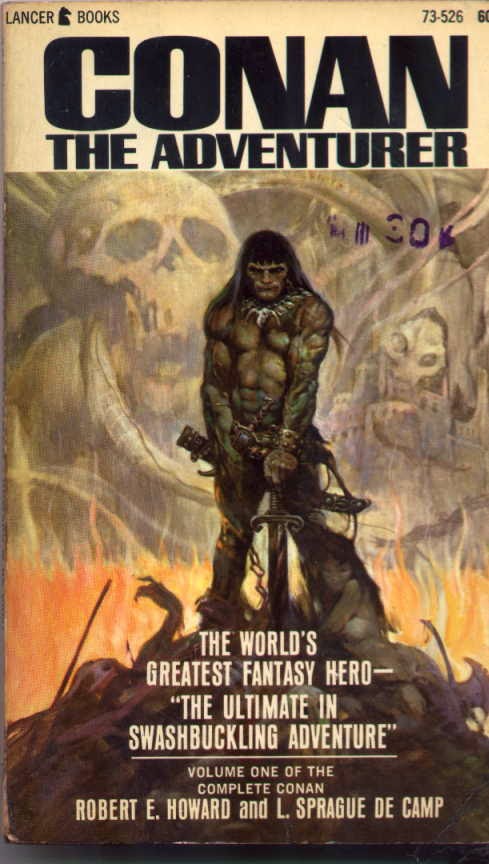 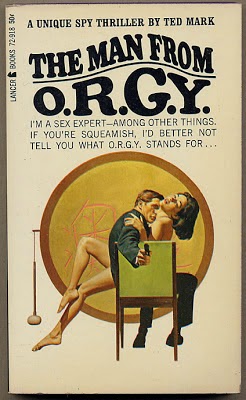 In 1961, Zacharius cofounded Lancer Books, most famous for its fantasy novels like Robert E. Howard’s Conan the Barbarian series, science fiction, and erotic spy novels like The Man From O.R.G.Y. In 1965, in a typically shrewd move, Zacharius published a racy sex satire called Candy by Terry Southern and Mason Hoffenberg. The novel had been a hit in Paris, but the publisher had not filed a copyright in the U.S. Dell had already published a version of the book but Zacharius was unfazed. Pricing his version at 20 cents below Dell’s, he splashed the phrase “banned in Paris” across its cover and produced a bestseller. In 1973, Lancer Books went bankrupt. The following year Zacharius, along with Roberta Grossman, formed Kensington Books, which went on to become the nation’s largest independent publisher of mass market and trade paperbacks. Kensington’s books were never going to make the New York Times Review of Books, which was fine with Zacharius. In a 1982 interview, he opined “We’re not impressed with what’s selling on Fifth Avenue or Rodeo Drive, our readers patronize suburban shopping malls”.  Kensington’s primary line was romance novels, published through its Zebra Books imprint, often with flashy (some would say trashy) foil covers. Zacharius built his empire thorough innovative marketing and knowing his audience. He sought out overlooked writers and unpublished authors willing to work for a pittance. Growing the romance genre beyond it formulaic roots, he expanded in to include supernatural and western-themed romances and romances aimed at Hispanic, black, and gay readers. In later years, he struck distribution deals with Wal-Mart, peddled his books on QVC, and pioneered the use of holograms on book covers. 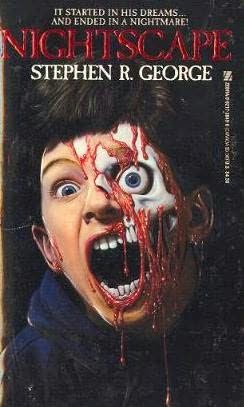 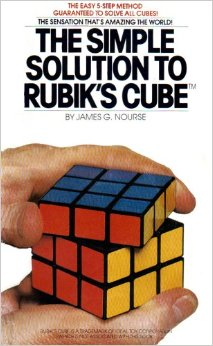 In the summer of 1981, Zacharius was, as always, looking for the next big thing. At the time, the most popular toy in the country was Rubik’s Cube. Invented in 1974 by Hungarian architect Erno Rubik, the toy was licensed to Ideal, who introduced to the American public in 1980. It was a national sensation, accounting for a quarter of Ideal’s revenues in 1981, selling 30 million copies by mid-1982, and become an icon of 1980s kitsch. Almost as popular as the cube itself were strategy guides that taught players how to solve the dastardly puzzle. Among the titles that hit the bestseller list were Solving the Cube by Cyril Ostrop, You Can Do the Cube, and Mastering Rubik’s Cube by Don Taylor. Written by a 13-year old English schoolboy, You Can Do the Cube sold 1.5 million copies worldwide. Mastering Rubik’s Cube did even better – its 1.8 million copies in print in 1981 made it the #1 trade paperback of the year. The biggest seller of them all was The Simple Solution to Rubik’s Cube, the #1 mass market paperback of the year (winning out over 101 Uses For a Dead Cat and a seemingly endless series of Garfield books – prompting many worried a intellectual to decry the trashing of literary culture). The book was written by James Nourse, a research chemist at Stanford, along with brothers Paul and Mark Weinberg. Originally sold as a typewritten set of instructions, the book was eventually published by Bantam and sold a million copies in its first month and over 7 million overall, making it the year’s bestselling title by far and one of Bantam’s biggest hits ever (a follow-up by Nourse called The Simple Solution to Cubic Puzzles sold another million copies). Zacharius noticed the plethora of Rubik’s Cube titles clogging the bestseller list, as well as the fact that such works were easy to publish (The Simple Solution… clocked in at just 64 pages and Mastering… at a skimpy 32 pages). It was too late to jump on the Rubik’s Cube bandwagon, but another craze was sweeping the nation – video games. Wondering if they could cash in on the phenomenon, Zacharius and Grossman turned to the youngest person in their offices – an 18-year old Harvard student named Tom Hirschfeld.

A Classics major, Hirschfeld had taken a year off after two years of college to work as an editorial assistant at Kensington. When Zacharius and Grossman asked Tom if he knew anything about video games, he said he had (though he was really more of a pinball player). When they asked if someone could write a strategy book about the games, Tom volunteered his services. Armed with a bag of quarters, Hirschfeld hit the New York City arcades and began to hone his skills. For assistance, manufacturers referred him to various expert players, including Leo Daniels, Asteroids ace Greg Davies, and national Space Invaders champion Bill Heinemann. The book, which took Hirschfeld about four months to complete, profiled the “30 most popular arcade games” (though this number included a few rarities like Atari’s Sky Raider and Bally/Midway’s Space Odyssey). Most games were covered in a 3-5 page section that included a hand-drawn screenshot, a summary of basic gameplay, a number of “observations” about the game, and a handful of strategies. 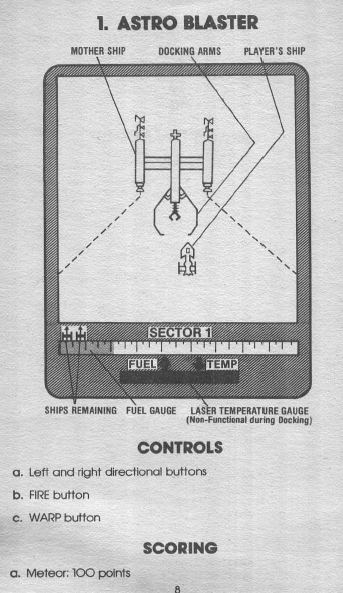 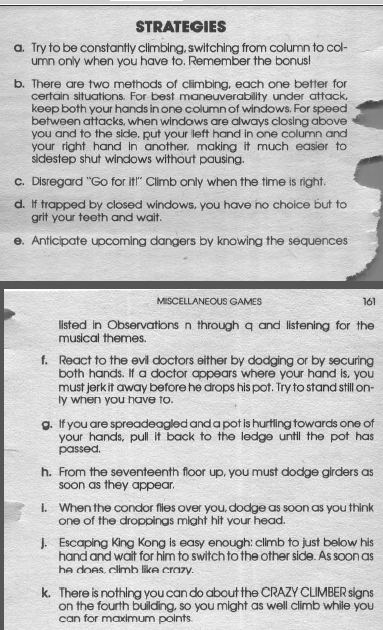 The book’s oddest chapter featured a series of somewhat bizarre “Off-Machine Exercises” a player could use to enhance their skills (example: “…wrap the fingers of your right hand tightly around a pen. Then extend the forefinger and rotate it clockwise around a doorknob”). 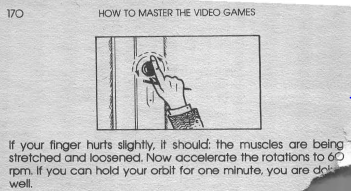 The strategies were fairly basic but at a time when video game strategy guides were unheard of, they were a godsend and many players would head to arcades with a well-worn copy of the book tucked into their back pocket. Anticipating the popularity of the book, Kensington realized that they wouldn’t be able to handle publishing it on their own. Instead, they turned to Bantam, publishers of The Simple Solution to Rubik’s Cube. Bantam agreed to publish the book and when they saw the final result, they asked Hirschfeld to create a second volume on home video games even before the first book went to press. Released in December, 1981, How to Master the Video Games was a hit. While it didn’t match the sales of Bantam’s Rubik’s Cube volume, over a million copies were printed. The book earned the teenaged Hirschfeld a measure of fame, with Bantam sending him on a publicity tour that included radio interviews, book signings, and an appearance on CBS Morning News (where he taught Diane Sawyer how to play Space Invaders). After penning his two video game tomes, Hirschfeld returned to Harvard to complete his degree then went to Oxford on a Marshall Scholarship where he earned a graduate degree in Economics and Politics. He then returned to the states where he spent 8 years at Salomon Brothers, worked as a financial advisor and venture capitalist, and served as an assistant to Mayor Rudolph Giuliani. In 1999, along with his wife, he wrote Business Dad: How Good Businessmen Can Make Great Fathers (and Vice Versa). 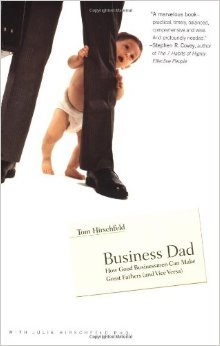