Ask anyone with a nodding acquaintance with arcade video game history what they first game with a microprocessor was and they'll likely name Midway's Gun Fight.  And they may be right.
But there is another game that may have beaten them to the punch - PMC Electronics' Aztec.

Gun Fight was the U.S. version of Taito's Western Gun (designed by Tomohiro Nishikado, who later designed Space Invaders), but with a major change. The Japanese version did not use a microprocessor. Gun Fight did.

It was not, however, the first time Bally tried using a microprocessor in a coin-op game.
In August of 1974, Bally sent two Flicker pinball games to Dave Nutting and Jeff Frederiksen at Dave Nutting Associates (a group that designed games under contract for Midway). Nutting and Frederiksen redesigned the game using an Intel 4004 microprocessor. Bally chose not to purchase Nutting's patents and instead would try to design their own microprocessor pins. Nutting, meanwhile, took their idea to Mirco Games, where they created the first commercially available microprocessor-based pinball game, Spirit of '76.
Before long, Bally changed its mind about Nuttings' patents and put them to work putting a microprocessor in a video game. They started with a baseball game (probably Ball Park) then switched to Western Gun. I'll skip the rest of the story, but the resulting game, Gun Fight, debuted in November of 1975.

Aztec
(UPDATE - It appears that Aztec did not, in fact, use a microprocessor - see comments for details)

PMC's Aztec was a cocktail-table Pong clone released around March of 1975.


I know next to nothing about PMC. Located in Southampton PA, it appears to have been established in 1965 and began making video games in 1973. In 1976 they were sued by Electromotion in nearby Bethlehem for copying one of their games (both companies were gone by the end of the year).

Allegedly, Aztec used a microprocessor. If so, that could make it the first microprocessor game, as it was released before Gun Fight.
For this to be true, however, we'd need to confirm a few things:
Let's start with #4. The flyer doesn't mention that they game used a microprocessor. In fact, I'm not sure where I first heard the claim (possibly in Vending Times). I don't have the game itself, nor do I know anyone who does and could confirm its use of a microprocessor.
The manual, however, has been posted online. The manual contains a written parts list and a typed one (the latter with part #s). The latter doesn't list anything that is clearly a microprocessor (it does list an IC but when I Googled the part #, it didn't seem to be a 4004 or 4040.

That second line sure looks like an Intel 4040/4004, but I'd have to see the board to confirm (actually, someone besides me would probably need to look at it).

There's another problem, however.
The manual cover is actually labeled "Aztec Princess" 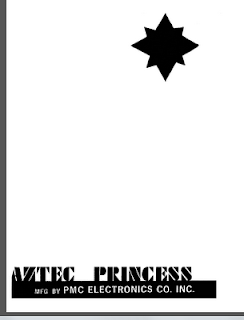 While Aztec appears on the cover, everything inside refers only to Princess.
The Arcade Flyer Archive has flyers for both Aztec and Princess.
Vending Times announced the release of Aztec in the March 1975 issue.
The May 1975 issue had a flyer/ad for "Aztec Princess".
Were these all the same game?

Aztec and Princess look very similar but there are differences.
Maybe the differences were in the cabinets?
Whatever the relationship, it looks like all the games were released by spring of 1975.

Gun Fight debuted in October1975 at the MOA show. The Mame history file lists a November release, but the source is unkown. It may be that it was introduced at the MOA and released a month later (there was generally a 1-3 month lag between when a game showed at the MOA and when it was released to distributors) or it may be that the announcement of its debut appeared in a magazine with a November cover date (I know that it was announced in the November 1975 Vending Times).

So it looks like there is a good case to be made for Aztec being the first game with a microprocessor.

But hold the phone.
There's actually another candidate.


In 1975, Fairchild Semiconductor released its first microprocessor, the F8. One of their new "field application engineers" - Jerry Lawson (who later created the Channel F and was also the only African American member of the Homebrew Computer Club), was convinced the F8 could be used in a video game. He added it to a game he created called Demolition Derby, which he sold to Major Manufacturing. Major supposedly tested it in a pizza parlor in Campbell California but went out of business a short time later.

NOTE - some sources claim this game was tested "shortly after Pong debuted".  (http://www.joystiq.com/2011/04/11/game-console-pioneer-jerry-lawson-dies-at-70/)
If it used an F8, this seems to be clearly inaccurate (though I suppose that depends on what they mean by "shortly") Lawson himself says in an interview that he create the game in his garage in 1972 or 1973 then goes on to talk about using an F8 in it. My guess is that he started it in 1972 without a microprocessor and later added the F8.

Even if all of this is true, however, was Demolition Derby tested before or after the release or testing of Aztec or Gun Fight? If Aztec did have a microprocessor and if it was released in March, it seems unlikely that Demolition Derby beat them to the punch (the F8 was released in the first quarter of 1975, but I'm not sure exactly when). The game was also never really released.

UPDATE - PT-109
Another candidate for the first microprocessor video game is discussed in the following post, which also has more info on Demolition Derby (though both that post and this one are out of date as I've since come across more information on both games):
http://allincolorforaquarter.blogspot.com/2013/11/video-game-firsts.html