One of the greatest pleasures of researching a book on video game history is interviewing the designers who made it happen. One of my all-time favorite interviews was with Dave Needle.
Needle is probably best known to video game fans for his work on the 3DO, the Atari Lynx, and the Commodore Amiga but did you know he started out as an independent video game designer way back in the early 1970s?  Or that this eventually led to his working on Midway's 1980 arcade game Space Encounters?
The story of how it happened involves Star Trek, the US Navy, and a late-night TV horror host.
Sound intriguing? Read on.

I would love to go into all the great stories he told me about his early years, when he passed up chance after chance to get in on the ground floor, but that would be a LONG post.

Instead, here's a super-brief summary:


[Dave Needle] So I volunteer for work on the U.S.S. Enterprise for the navy. So I’m going to spend the next nine months at sea and what am I doing in my spare time? Once again I’m building another game in an attaché case. This time it’s a multi-game game. It has a version of Breakout, it’s got a couple of different kinds of Pong games, it’s got a maze game. [There was] no software. It was entirely hardware driven…It grew to two attaché cases…with cables that connected them on the bottom. In one of them was the power supply and all the joysticks and stuff. The other one was this giant pile of wire-wrapped boards. So that’s what I did in my spare time. I only made one of them. I never turned it into a business. What a jerk I am.

All of these games were done in hardware using TTL/discrete logic. Needle never thought about trying to make commercial versions of ANY of them. I wish I had time to tell you about how he and his partners started buying parts at Mike Quinn Electronics, but I've got to get to the main point of the post some time. 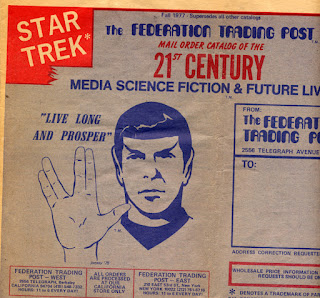 For their next effort, the pair decided to make use of some new technology. All of the games Needle and friends had created so far had been 100% hardware based. Now they decided to create a game using a microprocessor (they would actually end up using two 8080s in the game). While Needle had no real knowledge of software, Stan Shepherd was a software whiz. They took a trip to the Federation Trading Post (an unauthorized seller of Star Trek merchandise in Berkeley run by Charles Weiss and Ron Barlow) and offered to create a Star Trek video game for the place. When the owner told them “Sure, go ahead” they immediately began working on the game. What they didn’t know was that the Trading Post got offers like that every week and no one ever actually came through on their promise. That wouldn't be the case this time. After about four months, Needle, Shepherd, and Bob Ewell had finished the game and the people at the Trading Post were stunned.


[Dave Needle] The game had an Enterprise ship and a Klingon ship. They each had shields around them with 16 shield segments. The shields took individual hits and glowed when they got hit, which was a pretty good accomplishment in those days, and then dimmed down to a lower level of brightness. A couple of hits on a shield would make it die and then a direct hit through the shields to your ship would cause some damage. You could rotate your ship so that the incoming weapon would hit a shield instead of your ship. It was 2-player or one player against the computer. You had 99 photon torpedoes and some amount of phaser energy. In those days that was top-notch stuff. Plus we had a cloaked Romulan ship that would show up when he felt like it and shoot a fireball at you. You could damage the Romulan ship if you hit it while it was visible. The game had 16 levels of gray. It had 42 or 43 plug-in, wire-wrapped boards in a big chassis, 2 fans in the bottom


The game was spectacularly successful. We didn’t understand gaming construction and we built the cabinet bigger than 32 inches across. As a result a lot of places we tried to play the game in couldn’t get it through their door. The other mistake we made was we had this tiny coin box in the bottom that overflowed every day. So we ended up taking it out and putting in two two-pound coffee cans, one under each of the coin slots, which also filled up. While it was in the Federation Trading Post, we were making $400 every couple of days. The three of us, I now had two other partners, would leave work at lunch, drive out to Berkeley and collect the money. After a while we got tired of driving there and we just trusted him and once a week we’d go out there and they’d give us a check of a pile of cash. Did I build ten of these? Did I sell it to someone? No. What a jerk I am.


The trio's Star Trek game (which was probably created around 1977 or 1978) had another feature that would appeal to fans of the series. When a player lost, the Doomsday Machine from the episode of the same name (kind of a gian, floating cornucopia) would appear on screen and destroy their ship. The game was so popular that a local TV station got wind of it and the designers were asked to appear on Bob Wilkins’ Creature Features, a Sacramento area late-night show featuring horror movies and hosted by Wilkins, who also interviewed celebrities, the most famous being Christopher Lee[1]. The next day, Needle and his friends were recognized in the streets, but even more importantly, the segment had brought them to attention of Bally/Midway who soon contacted them about creating a game under contract. With the Bally contract in hand, Needle and crew set about work on a game that would eventually see light as Space Encounters and Needle was finally able to turn his “hobby” into a profession[2].

[1] Wilkns’ show is said to have persuaded a young fan named George Lucas to begin making Science Fiction movies.
[2] The group had actually designed a quickie game for Ramtek earlier, but the game was never released.


So does anyone out there remember this game?
Posted by Keith Smith at 12:32 AM