What Was The First "True" Color Arcade Video Game? 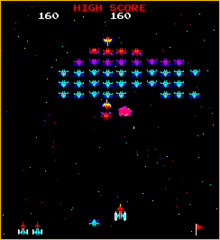 Galaxian (Namco, 1979) Bzzt! Not even close. This used to be the standard answer and you can still find plenty of websites and books that say it is, but isn't. Now it may have been one of the first games, or even THE first game to make really effective use of color, but it wasn't the first to use color period. 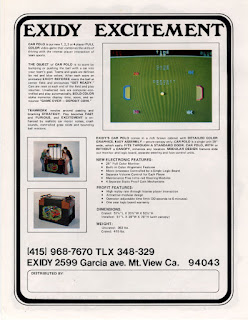 Car Polo (Exidy, ca March 1977) - Nope. This was Exidy's first true color games and one of the earliest to combine color with a microprocessor, but it wasn't the first in the industry. Factoid: Death Race was actually intended only as a filler until Car Polo was ready. 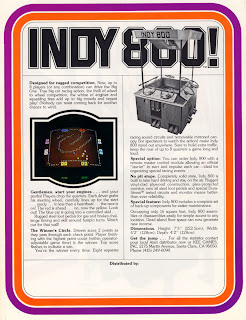 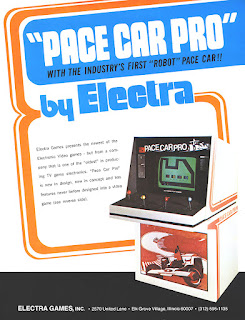 Pace Car Pro (Electra Games, debuted October 1974) - Wow! Where did you hear about this one?   Electra Games was the coin-op video game division of URL (who later developed for Stern). Pace Car Pro was their first game. Interesting little company, that URL. They made circuit boards for Paddle Battle. Their  Video Action (1974?) may have been the second home system released in the US. And Pace Car Pro was actually similar to a color home game that they ALMOST released in winter of 1975. You see…
but that's a story for another post. 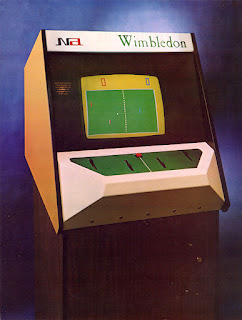 Wimbledon (Nutting Associates, 1974??) - Maybe, just maybe. Yes, it was a ball-and-paddle game that used true color (at least I think it did). Why? Don't ask me. The question is, if it was released and (if so) when. Some sources (including TAFA) say it was released in 1973, others (like KLOV) say 1974. I'm not sure which it is (my library's run of Vending Times starts in March of 1974 or I might be able to confirm). In any event, it likely beat Pace Car Pro to market. But is it the absolute first? It all depends on that unconfirmed release date.
Table Tennis is another Nutting game that might have used color, but it looks like overlays to me. 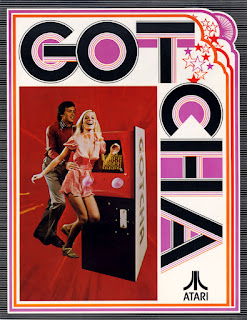 Color Gotcha (Atari, October 1973) - Ladies and gents we might have a winnah!  Or we might not. No, not Gotcha, I'm talking about COLOR Gotcha. And yes that is a flyer for regular old black-and-white Gotcha, but that's because I don't thik Color Gotcha ever had a flyer since it was (supposedly) a "limited run" game.
Color Gotcha did use real color and we seem to have a firm release date (from the internal Atari document) but did it come out before  Wimbledon or not? Then there's the issue of whether or not it counts as "released". One person at Atari told me this: " Usually, an ultra-limited production run meant that we sold the pre-production prototypes and hoped nobody got mad at us." Color Gotcha was (I believe) developed at Grass Valley/Cyan Engineering and my guess is that less than 10 were produced (someone might have actually told me that), but until I can confirm Wimbledon's release date or find another contender that I missed (a distinct possibility), it gets my vote.