Not so many years ago, Atari's 1976 arcade game Night Driver was commonly credited as the first first-person driving game. In some places, it still is, though even Wikipedia now notes that a German game called Nurburgring came out first. But what was the story of Nurburgring and how did Atari find out about it?

In truth, there was reason to doubt Night Driver's claim to the first first-person driving game title from the start. Night Driver debuted at the 1976 AMOA show in October. That very same show, however, witnessed the appearance of two other nearly identical games - Bally/Midway's Midnite Racer and Micronetics' Night Racer.

﻿﻿So what's the story? How did all three games show up at once and what is their connection to the German original? 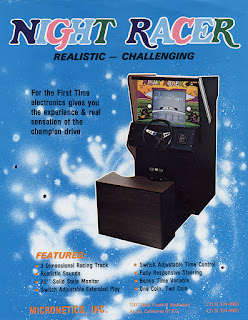 Well, it starts (at least part of it does) with Ted Michon. Michon later formed a company called Technical Magic who designed Star Fire,Fire One!, and Kreepy Krawlers for Exidy and the unreleased The Last Starfighter for Atari.
In 1976, however, Michon was working for Digital Games of Covina, California, who had entered the coin-op field in 1974 with Knock Out (actually, I don't know if that was their first game or not).

Digital's latest game was Air Combat (which had a number of interesting problems I won't go into here). They had sold 50 of them to an operator in West Germany. The only problem was that they forgot to include a PC board in them. Michon was dispatched to Dusseldorf where he found that all of the games had also been damaged in shipment. I'll save the details for another time (or the book) but during his two-week stay, Michon paid a visit to a nearby bowling alley where he saw a one-of-a-kind driving game called Nurburgring (named for the German race track). Michon even met the game's designer, Reiner Foerst.

Foerst was working with American companies to license his game. There was a problem, however. The game design was very complex (it included a rack with 28 pc boards). Michon tried to explain to Forest that his company might be interested in the game but the design was not economically feasible. Forest, however, was convinced he would be able to sell it as is.


After Michon returned state-side, he set to work on a more practical all-digital version of the game called Night Racer. When Digital's Bill Prast saw the game, he was so impressed he showed it to Midway cofounder Hank Ross and the two struck a deal in which both would produce a version of the game with Midway paying royalties to Digital.

But wasn't Night Racer released by Micronetics you ask? Yes, it was. At the time, Digital was experiencing financial difficulties. In June of 1976 it shut its doors. A company named US Medical Industries bought its inventory at auction and the following Monday Digital reopened its doors as Micronetics.

Micronetics didn't last long, but they did show Night Racer at the AMOA show (reportedly because, if they didn't, Midway wouldn't have to pay them royalties).

Meanwhile, over at Dave Nutting Associates, Jay Fenton was at work creating their version of the game Midnite Racer for Midway. Michon even helped out a bit by explaining how he had used logarithms and antilogarithms to perform multiplications by addition (since the hardware he used could not handle the multiplications and divisions needed to draw objects in the proper perspective). 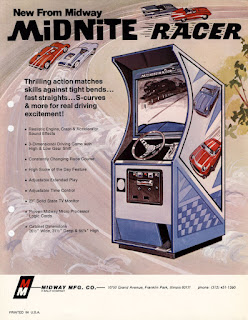 But wasn't Midway's game called 280 Zzzap, you ask?
Yes it was. While it was shown under the tile Midnite Racerat the AMOA, a short time later Midway cooked up a promotion where they gave away a Datsun 280Z. Realizing that their driving game would make a perfect tie-in, they renamed it 280 Zzzap. 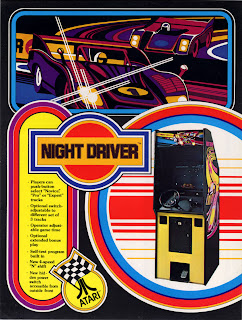 But what about Night Driver? Designer Dave Sheppard recalls being shown a photocopied flyer of a similar game in a foreign language, which he thinks was German. Surely, this was Nurburgring.


And what about the original and Reiner Foerst?

Nurburgring was Foerst's first video game. He had earlier created other coin-op games, like the Bingo game Ring-O-Bang(NOTE - a "bingo" game was a pinball variant in which the player tried to line up five balls in a row in a grid of holes).

Ted Michon actually wrote Foerst a letter telling him what was happening with his game. Foerst, however, apparently formed his own company to release the game. Nurburgring 1 was released by Dr. -ing Reiner Foerst GmbH. He followed with at least two more versions: Nurburgring 2 (which had handlebars instead of a steering wheel) and Nurburgring 3 (with much improved graphics, including a road with a center line). Replay reported that he showed a version called Nurburgring Power Slide at a European show in September of 1979 so the game apparently saw some success.
And today, Foerst runs Foerst Driving Simulators, which makes driving simulators for cars, trucks, and buses.