The Bishop of Battle/No Quarter

"Greetings Earthling!
I am the Bishop of Battle
Master of all I survey.
I have 13 progressively harder levels.
Try me if you dare!"


The golden age  of arcade video games saw the release of a number of video-game-related movies. Everyone remembers War Games and Tron and most people reading this probably remember The Last Starfighter. Unfortunately, many of us also remember Joysticks (though we wish we could forget it). 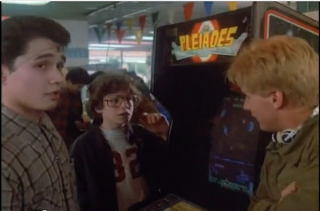 One of my favorites was the 1983 horror anthology Nightmares, which featured a segment called The Bishop of Battle. Emilio Estevez stars as J.J. Cooney  - a disaffected youth/troubled teen who listens to hardcore punk bands like Fear on his Walkman as he plays coin-op video games at a master level. As the epsiode opens, J.J. and his geeky sidekick Zock hustle a group of street toughs out of $25 on, get this, Pleiades. After barely escaping with their lives, the two head to the mall where J.J. wants to play his latest obsession, The Bishop of Battle. Zock gets ticked and leaves ("You know what J.J.? You're nuts. That machine's made you into ...some kinda fiend!"" 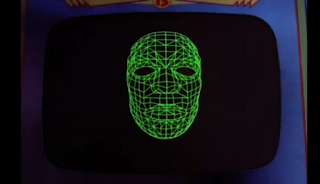 Back home, dad lowers the boom. J.J. is grounded - no more video games until his grades improve. J.J. has his own proposal - once he beats the Bishop, he'll swear off games forever, but dad isn't having it and J.J. storms off ("You sit there in that chair, and you make judgments on me. You don't know anything about me! Goodnight, go to hell! I hate the both of you!")
J.J. sneaks out late at night, breaks into the arcade and finally reaches the 13th level , where….

I don't want to spoil it for you (the episode is available on YouTube).

A vaguely similar plot was used in No Quarter, an episode of the CBC radio anthology Night Fall.  No Quarter aired on March 4, 1983. It tells the story of Paul Weaver, a poor shlub who becomes obsessed with video games after playing Donkey Kong while waiting for a delayed flight at the Vancouver Airport.  On a drive home from dinner, he and his wife get into an argument over the time he's spending on the games. She is concerned that the games promote anti-social behavior in violence. He replies that the games are educational ("The Defense Department uses Armor Attack as a simulator for tank training.").
After he misses an important meeting because he's busy playing Defender ("It you want to beat Defender, don't use the smart bomb in hyperspace." The arcade owner dubiously tells him), his wife launches a public crusade against video games.
One day, Paul gets a mysterious package containing a talking arcade game called Death Ship (it even says "coin detected in pocket" ala Berzerk).
So what happens when he plays it? Listen to the episode to find out.
An interesting episode with lots of 1980s video-game references (At one point, the arcade owner tells Paul "Some computer science student in Buffalo blew the brains out of a Pac-Man. You know it only stores six figures. Well, he turned it over 3 times and the screen split the maze on one side and this electronic gibberish on the other.")
You can listen to it at http://www.blogtalkradio.com/scarefm/2012/07/31/nightfall-series--no-quarter