The Story of Journey - the Video Game

Today I'm going to do a post where I actualy include an excerpt from my book.
The topic is the coin-op video game Journey, released by Bally/Midway around April of 1983 and designed at Marvin Glass Associates.

First,  a little background.
By the mid-1980s, Bally/Midway had a number of teams designing games for them.
They had an internal team and at least three external ones: Dave Nutting Associates, Arcade Engineering (in Florida), and Marvin Glass Associates.

Marvin Glass was a legendary toy design firm that created such toys as Rock 'Em Sock 'Em Robots, Ants in Your Pants, Lite Brite, Mousetrap, Operation, Toss Across and Mystery Date. They even created the original chattery teeth novelty. In the 1980s, Marvin Glass established a video game design team and began creating games for Bally/Midway.

On to the game (the rest of the post is excerpted from my book All in Color For a Quarter. Note that the book is in rough draft form): 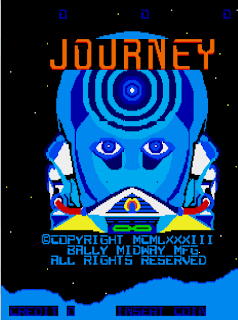 In late 1982, Bally approached the Marvin Glass team with another proposal. They wanted to create a video game starring the popular rock group Journey. At the time, the group was at the height of its popularity. Its last five albums had made the top 40 and in 1981, they had two hit albums. First was Captured which went to # 9 then came their biggest hit, Escape which went all the way to #1, eventually sold over 9 million copies, and produced the top-ten hits “Who’s Crying Now”, “Don’t Stop Believin’” and “Open Arms”. They were about to go on tour to promote their new album Frontiers and thought that a video-game starring the band might be a good idea and could perhaps even be incorporated into their stage show. The group had become video game fans after bassist Ros Valory and drummer Steve Smith discovered a Defender game while touring Japan. For the next two years, a Defender game accompanied the band on its tours. One member who didn't like the idea was frontman Steve Perry, who thought it was silly and felt the band didn't need to promote itself with a video game. The band quickly arranged to have both a home video game (Data Age’s Journey, released for the Atari 2600 in Christmas 1982) and a coin-op video game based on the band. There was a catch, however,


[Scott Morrison] Midway came to us and told us they had a deal with Journey to do a video game based on the band. They wanted it done in less than three months, to coincide with the release of Journey’s new album and their American tour. Midway came to us because their own design group said it was impossible to do. Of course, we had to prove them wrong, so we brainstormed and came up with a game that we thought we could do in that time frame.


With the impetus of the new challenge, the Marvin Glass team began work on the game around October of 1982.


The game was the work of programmers Richard and Elaine Ditton (who also created the game’s sounds) and artist Scott Morrison. It also featured work by another video game veteran (and I do mean veteran). Journey made use of digitized photos of the band members using a digitizing camera that had been developed by none other than Ralph Baer, the “father of video games” who’d created the Odyssey back in 1966. Baer had come to Marvin Glass in the mid-1970s and his early projects there included a record changing device for phonographs and Milton Bradley’s Simon . The game also featured actual Journey music supplied via cassette tape.


Baer had developed his digitizing camera for use in video games before coming to Marvin Glass. When he demonstrated the unit for chief engineer John Pasierb, Midway was very interested and immediately contracted with Baer who went to work with the Marvin Glass group. The first game to try the new technology was a prototype called Clone. In Clone, rather than just including pre-generated digitized graphics in the game, each machine would contain a digitizing camera that allowed players to take their own pictures so that they could become part of the game. The player would then fly his or her animated face around the screen and replicate themselves into empty pods. A prototype was built and play tested but when (predictably to anyone who knows a thing about teenage boys) some players took pictures of body parts other than their faces, plans for the game were scrapped.


[Stan Jarocki] Kids were dropping their pants and girls were baring their breasts and all that kind of stuff. We had it out on test at Aladdin’s Castle for a while and all of a sudden you see a butt on the shoulders of this character and think “This ain’t gonna fly” but it was a great idea.


When the idea for Journey came around, Marvin Glass saw another opportunity to put Baer’s digitizing technology to use. Initially, Morrison created some storyboards and traveled to San Francisco to meet with Jim Welch who’d created the band’s album covers and stage visuals. After Welch approved the game concept, Morrison returned to Chicago where work on the game began in earnest. At first, the team tried to digitize existing photos of the band but it just didn’t work, so they hired a professional photographer and, carting along Baer’s digitizing camera, made their way to a Journey concert in Salt Lake City to snap some backstage photos. After prying groupies off of a reluctant Steve Perry, the photos were taken and made their way into the game (they were black and white and seemed a bit large for the character’s computer-generated bodies). The game's attract mode describes it as follows:


"Wild alien groupoids have seized Journey's electro supercharged instruments. Your mission is to help Journey retrieve their instruments from the dangers of the five galaxies. Trek through hazardous obstacles in quest of each instrument and then battle your way back to the scarab vehicle. When all five missions are completed Journey begins a spectacular concert at the Galactic Stadium."


Journey was a multi-stage game with each band member having their own unique mini-game. Lead singer Steve Perry, for instance, had to navigate a series of swinging gates to reach his microphone then blast his way back to the top of the screen to the awaiting spaceship (a video representation of the scarab-like ship that had appeared on many of the band’s album covers). In Steve Smith’s segment, the drummer bounced off a series of drums trying to turn them all the same color then leaped behind the wheel of a laserbeam-equipped drum set to fight his way through a horde of enemies. Other segments included guitarist Neal Schoen fighting through a cavern with a rocket-powered backpack to retrieve a guitar/laser rifle, keyboardist Jonathan Cain leaping over conveyor-belts strewn with hurdles to reach his piano, and bassist Ros Valory hopping on a series of telescoping blocks. After all five band members made it to the awaiting ship, action switched to a scene of Journey in concert where manager Herbie Herbert had to prevent legions of half-crazed groupies from running backstage while Journey music played in the background. The Marvin Glass team finished the game by February of 1983, managing to do what the Bally team had called impossible and while the resulting game looks somewhat rushed (and with good reason), it was an admirable job given the constraints and remains a rare example of actual celebrities appearing in a video game[1]. 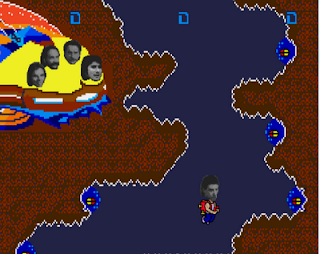