The Dark Side of the Moon of Video Games?

Pink Floyd's Dark Side of the Moon is well-known for its 741-week run on the Billboard charts. But there is a coin-op video game that did almost the same thing - and it's one that very few who didn't experience the golden age of video games first hand will remember. Even a lot of people who WERE there probably wouldn't be able to name this forgotten classic.

Back when I started writing my book, Replay was kind enough to send me copies of their Player's Choice charts from the 1980s (actually, I might have bought them). My main goal was to track the peak chart position of all games released prior to 1985, so I only asked for the charts up to December of 1986.

That December 1986 chart included only two games released prior to 1983.
One was barely on the charts at #24 (the chart only went to #25) but the other was at #9 and had appeared on the charts a record 55 times.
Guess which one?

No, the game at #9 wasn't any of those all-time classics, it was 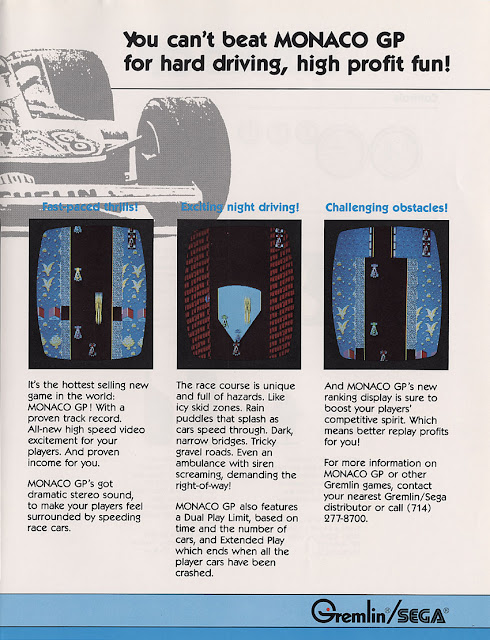 Monaco GP by Gremlin/Sega, which debuted WAY back at the AMOA show in 1979.

Now you're probably thinking this is a fluke - some kind of anomaly with the Replay charts, right?

Well, maybe but I don't think so.
Monaco GP was actually a freaking great game.

It may not seem like it today, but I very clearly remember playing it back in the day and loving it. In fact, it's probably the driving game that I enjoyed the most from the era (and yes, I played Pole Position, Night Driver, and most of the others).

What was so great about the game?
It's hard to say. It may have been that it was one of the first full color driving games.
The gameplay was pretty straightforward but there was something about it that just took it to another level (similar games like Midway's Super Speed Race came out around the same time but they didn't have the "it" factor that Monaco GP did).

It was a top-down driving game in which you navigated over four terrain types - a regular road, an icy road, a night-time road, and a bridge. Controls were the standard driving controls - steering wheel, gas pedal, and gear shift.

Unfortunately I know next to nothing about its design history.
It was one of the last TTL/discrete logic games released (which is why it isn't in MAME, though I think it is in MifitMAME).

Sadly, the game seems all but forgotten today but back in the day, it was the stuff.

For the record, here are the top ten games in terms of # of chart appearances through December 1986:

2.       Galaga - 44
Galaga could also merit the title "Dark Side of the Moon of Video Games".  Perhaps even more so than Monaco GP.
If I compiled the all-time numbers, I'd guess that Galaga would be #1 in total chart appearances and quite possibly in longest span between first and last appearances. It was one of the few classic games you  could still find in a significant number of locations just before retro gaming took off. Plus it was reissued in the Ms. Pac-Man/Galaga cabinet.