One interesting item I came across recently was an article called Video Wars that appeared in the March 8th, 1981 San Diego Union.

It's about someone named Wynn Bailey who claims he was "key in the creation" of Tailgunner, Rip Off (which the article says was his "first brainstorm for the company"), and Star Castle. Bailey had recently been fired - he says for "talking to a magazine reporter without authorization from company management." (though he also admits he was seeking employment with other companies and speculates that Cinematronics may have feared he was selling company secrets). Cinematronics denied the story, claiming that he just up and quit. Bailey also claimed an "executive level" salary with "free use of a company car."

The article claims that Bailey developed a love for arcade games as a child when he lived next to an amusement park. After graduating with an engineering degree in the early '70s, he took a job with a Bay Area medical imaging company (NOTE - this was probably Ramtek, who did make medical imaging products prior to getting into video games) In 1976 he was transferred to the firm's small video game department, where he "specialized in idea and design work." In early 1980, Cinematronics allegedly bought the department "..including Bailey's services and his exclusive vectorbeam system".

The trouble is, I've never heard of this guy. Nobody I talked to from Cinematronics, including
Rip-Off / Star Castle designer Tim Skelly, mentioned him. Many of the alleged facts in the story don't square with what I've heard elsewhere. For instance, it claims that Cinematronics purchased his vectorbeam system in 1980, but they had introduced their first vector game, Space Wars in November of 1977.

A web search turned up only one article from an Italian magazine but the text is in Italian.
http://www.tilt.it/mag.htm

So what's the deal with this guy?

Tim Skelly? It doesn't look anything like Skelly (at least not to me) and some of the details don't seem to jibe with Skelly's story (Skelly came to Cinematronics directly from Kansas City and had nothing to do with developing the original vectorbeam system).

Larry Rosenthal? Again, it doesn't look like him to me (though I've only seen a couple of photos of Rosenthal) but it's possible. From what I've heard, Rosenthal and Bill Cravens left on their own to form Vectorbeam and he wasn't fired (though this story is compatible with that of Cinematronics in the article). I've also never heard that he had anything to do with Rip-Off (though Star Castle used elements of a game that he and Dan Sunday created at Vectorbeam).


Dan Sunday? This seems like the most likely candidate to me, though again there are problems.
Sunday was the main designer/programmer of Tailgunner and the rotating rings idea for Star Castle came from game he and Rosenthal worked on. As with Rosenthal, however, I've never heard that he had anything to do with Rip-Off (which, from what I know, was entirely Tim Skelly's idea).
Sunday is the only one of the three I haven't talked to, but in his account here:
http://www.cinematronics.org/sunday_pt1.html
he doesn't mention being fired by Cinematronics (though neither does he deny it) but he does say that they wanted to hire him back, which seems unlikely if he is the Wynn Baily in the article.
I have not seen a photo of Sunday, so I can't compare (the Italian article has a photo of Steve Ritchie [Ithink] playing Black Knight - the caption metions "Wynn Bailey" and seems to indicate that he is on the left but I'm not sure. I think he's the guy in the firt photoe (he doesn't look exactly like the guy in the Union but they could be and the pose in the two photos is similar) - the guy sitting in the background in the Ritchie picture might be him, but I think it's Larry Demar).


2) Is "Wynn Bailey" stretching the truth?

Maybe he did work on the games in a minor capacity and is falsely claiming he created them to try and get back at the company, launch a lawsuit etc.

Maybe his name really is Wynn Bailey and he really is the creator of Tailgunner, Rip-Off, and Star Castle and all others associated with the game are covering it up. This seems highly unlikely to me. Tim Skelly, Dan Sunday, and Scott Boden all seemed truthful to me in all the interviews I've read or conducted. 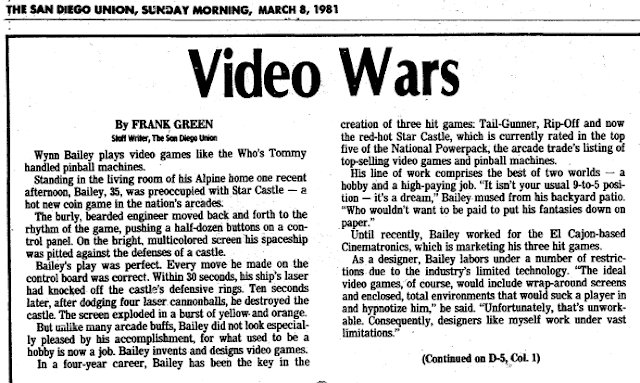 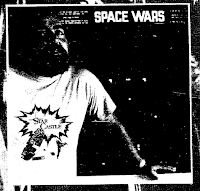 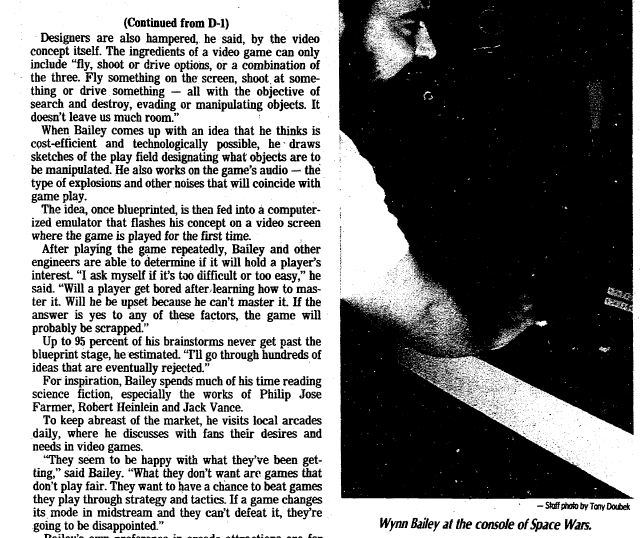 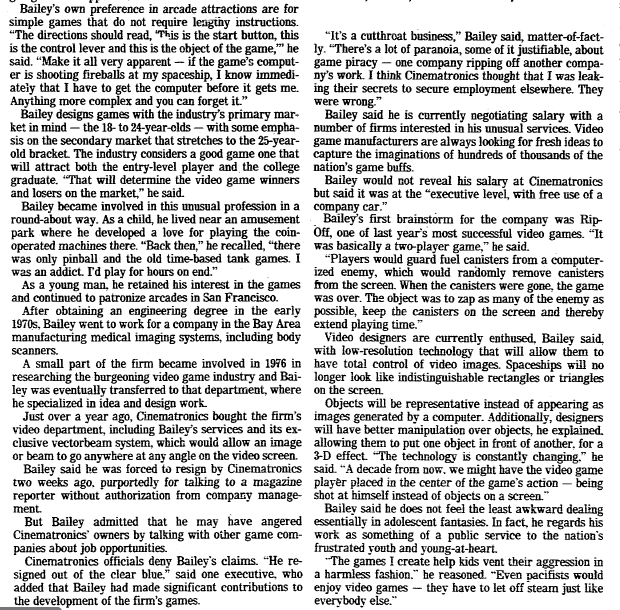