A bit of a change of pace today. What were the worst coin-op video game names from the bronze and golden eras? I'm talking worst names here, not worst games. It is, of course, subjective but here is my top ten

10. Donkey Kong (Nintendo) - Blasphemy you say? At a time when Donkey Kong is a household name it may seem like it but people forget how stupid this name seemed when the game first came out. The explanation that "donkey" means "stupid" clears things up a bit but if you have to explain your game's name…
9. Do! Run Run (Universal) - I actually like the Mr. Do series. In fact, loath as I am to admit it, Mr. Do! is my favorite game but this name just doesn’t work. Plus, anything that reminds me of Shaun Cassidy can't be a good thing.
8. Libble Rabble (Namco) - Toru Iwatani once called this his favorite game. Neither the game nor the name is among my favorites. What is a "libble" anyway?
7. Ckidzo (Meadows Games) - I can't even spell this thing much less pronounce it (for the record, the pronunciation is "SKID-ZO").
6. Oli-Boo-Chu (Irem/GDI) - I'm not even going to guess what this one means but the name doesn't exactly make me eager to play the game.  "I'm gonna play me some Defender" gets the blood pumping. "I'm gonna play me some Oli-Boo-Chu"? Not so much.
5. Smatch (Renee Pierre) - Sounds like a communicable disease to me.
4. Computer Space Ball (Nutting Associates) - Uninspired doesn't begin to describe this one. I have no idea where the "space" part comes in (though I suppose the name "Computer Ball" was right out).
3. Pooyan (Konami/Stern) - Sounds like something you say when someone cuts the cheese. "Pooyan! That stinks!".
2. Minky Monkey (Technos) - Who's a minky little monkey? YOU"RE a minky little monkey. Yes you are. Yes you ARE a minky little monkey. Koochie, Koochie, Koo! (minky monkey claps and giggles)
Again, I have no idea what "minky" means. Is minkiness something one looks for in a monkey?
1. Defend the Terra Attack on the Red UFO (Artic?) - That's not a name - it's a short story.  OK, I realize that this was probably a translation of a Japanese title and that it may not have ever been released (and if it was, it was likely a bootleg) but still.
I remember once looking at the patent application for Tapper and was amused to find that it listed the game as "Video game in which a host image repels ravenous images by serving filled vessels". I thought "Hey, wouldn't THAT make a great name for a video game?". Well "Defend the Terra Attack on the Red UFO" isn't much better - and it was actually used. 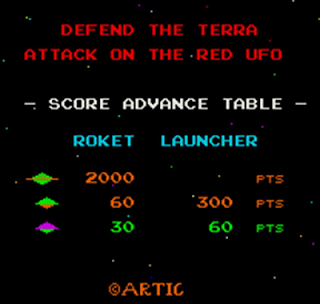