Of all the games from the golden age (or any other for that matter), surely none had a more convoluted history than Centuri's Tunnel Hunt. It started out as a vector game called Tube Chase at Atari and ended up as a raster game called Tunnel Hunt at Centuri, with a stop at Exidy (where it was called Vertigo) in between. Adding to the confusion, Exidy produced another prototype game called Vertigo.  Here's the story, largely from an interview I did with Owen Rubin in March of 1998.

Another Centuri game had actually started life as a color vector game, but 1981’s Tunnel Hunt ended up as a raster game. The game, which was actually the creation of Atari’s Owen Rubin, had a long and torturous history. It started life at Atari as Tube Chase and was Rubin’s first color vector project. Initially he started with an Asteroids vector system and some Night Driver code to create a simple flying game.


[Owen Rubin] I started the game as a vector graphics project based on the opening landing sequence in the movie Aliens. It did not work in vector, but that took several months to discover. Dave Sherman had an ellipse generator that he thought would be good, so I spent nine months or so and did this great game of flying down tunnels. The tunnels split and merged and you occasionally exited into space where you could fly into one of several other tunnels (worm holes). . .The only way you could slow down was to hit the walls, but that raised the hull temperature. It was a good strategy to bump the wall to hold off a target so that you would not overtake it, especially if your lasers were out. . .  It had a great cabinet. It “wrapped” around you with speakers behind and in front. You stood, not sat, and it blocked out outside noise. The controller was a flight stick for flying with buttons for firing and shields.


The game was play-tested and scored a solid #2 or #3 for 10 weeks straight but Atari would not feel comfortable unless it reached #1. Atari felt that the game needed some changes and Rubin went back to work, spending another six months on the game. Then management decided that the game was too expensive.


[Owen Rubin] So we cheapened the hardware to do circles only. This made the split tubes ugly, and the warping of the tunnel effect was lost. . . It took another four months to make the changes. We field tested it again - #2, solid! They changed the hardware again to make it even cheaper, which allowed only one sorted list of circles and so I had to take out the splits. The game was MUCH simpler now, but still the same basic game play.


[It was] still too expensive, so Dave did a rectangle generator and I rewrote the game for a square tube. After 3-4 months [we did] another field test – still #2 for another five weeks (at different arcades all the time as well). So after almost two years of screwing around with it, they decided to sell the game to a competitor – something Atari had NEVER done.


So, I stated another turn to change the name to Vertigo for Exidy. This was harder than it sounds because I put some VERY elaborate security code in the game to prevent a clone company from being able to copy the game and remove the word Atari from the screen. After all this time, I forgot where it all was. Another three months and they had their game. They field tested it again, but now it was only earning a solid #3. After all, it was OVER two years old and starting to look out of date.


In Exidy’s version, the game was packed into a cockpit cabinet. After building a small test run, however, Exidy decided it didn’t want the game after all, though they did go on to develop another, unrelated, game with the same name.


[Owen Rubin] About three months later, they rolled the game back into my lab and asked if I could make “just one more change”. This line became a joke because they’d asked this maybe 70 times by now. I changed it AGAIN, this time for Centuri in Florida, and they did build the game. Unfortunately it was now almost three years out of date…


The kicker to all this is that after I left Atari, I went immediately to Bally/Sente to work with some old teammates from Atari. When I walked into my new law, there was a Tunnel Hunt with a sign asking if I would make “just one more change”. Of course, they didn’t really want it, but I got a VERY good laugh out of it. 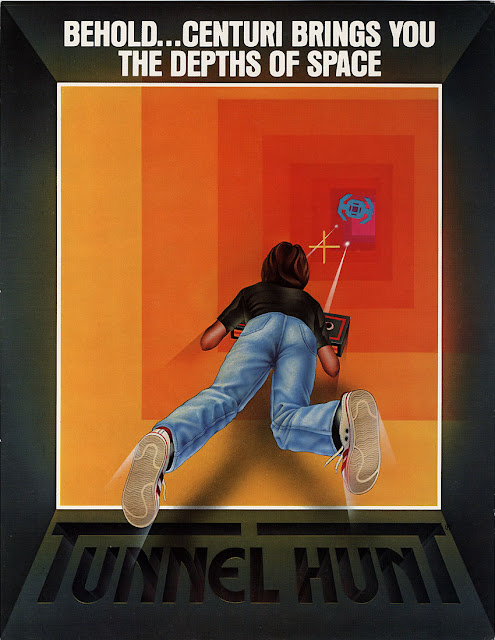